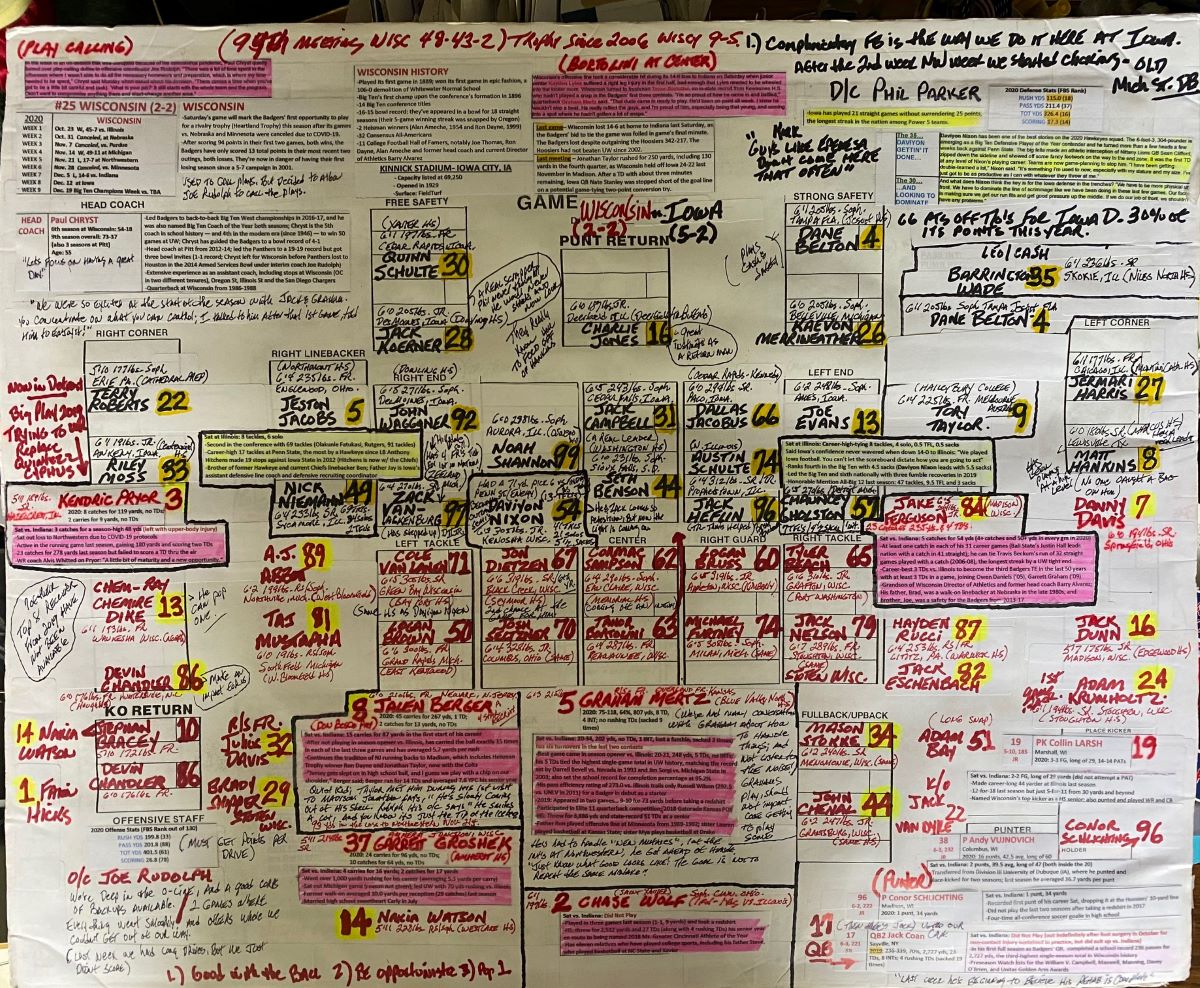 If you watch college football regularly, you’ve probably learned something intriguing about a player or assistant coach whom you’ve never heard of in your life, and likely not mentioned again soon. But have you ever wondered how that broadcaster has all that knowledge at the tip of his fingertips? How he or she can instantly recall anything, from statistics to life stories about some second string defensive back at a small football school?

Fox’ veteran college football broadcaster Tim Brando spoke about the work he does before calling games each fall. The man who’s called hundreds of games in an illustrious career keeps stressing one word: preparation, preparation, and more preparation.

Perhaps the photo above reminds you of a cheat sheet that you might have marked up for a high school exam, or maybe it looks like complete gibberish. But it is actually the Wisconsin offense versus the Iowa defense, and one of many hundreds of Brando’s personal works of preparatory art.

The effort leading up to a Saturday game starts on Sunday, when the play-by-play voice extraordinaire re-watches the previous day’s game to critique himself. How does it go? Pursue perfection and you’ll wind up with excellence. Yes, even after four decades behind the mic, Brando keeps seeking perfection.

In reality, Brando’s work started long before Sunday. Tim followed in his father’s footsteps. Dad was a longtime Shreveport, Louisiana radio broadcaster and the younger Brando began calling games for his high school at age 14. Before he had spotting boards the teenager had pen and paper to handwrite stats and stories. Tim then committed much of what he documented to memory.

In 1985, Brando (left, with his current Fox partner Spencer Tillman) started using the spotting board during telecasts. And yes, he keeps all of them. They’re paintings of years of work, of games big and small. They come in handy at times, serving as excellent resources when covering schools he has seen before. Tim said that being able to share pertinent information from sports’ rich history enables viewers to draw parallels. He tells us, “Too many people think that if it happened before they were born it is less significant” .

As a young sports enthusiast in Shreveport, he read, wrote and consumed all the knowledge he could fit into his head. Decades later, his reservoir of information enables him him to weave in stories and anecdotes into a network football or basketball broadcast.

Beginning on Mondays, Brando creates his spotting board. One showing each offense lined up against each defense. He uses a research service to get statistical data and historical information on the schools he is covering and he condenses it into an efficient depth chart. As the board gets crafted, he uses stickers to cover up or move players based on lineup changes during games or injuries that may occur throughout the preceding week.

Brando understands what viewers expect more so perhaps than other broadcasters. He spent years at ESPN and later at CBS before taking his distinct voice to the Foxies. At these earlier stops, Brnado, now one of the most senior play-by-play voices nationally, spent time hosting Saturday’s college football studio shows. So it was necessary for him to be thoroughly ready to address all football activities across the land. In other words, the viewers counted on him to be a fountain of information, not just a play-by-play voice who’s prepared for one game.

During the week before each game, Tim contacts each school’s Sports Information Directors, folks who share great storylines and other worthwhile anecdotal information, whether it’s human interest angles, statistical factoids or coaches’ tendencies. More often than not, the SIDs are enthusiastic and great sources of information. Brando also culls newspaper article on both squads leading up to game-day.

Last November, Brando was assigned a highly anticipated showdown between San Jose State and Boise State. Being that the Spartans had not been on national TV since 2006, the SID had no shortage of material. The Fox broadcast team, Brando and Spencer Tillman, had a six hour zoom call to get ready. Time was spent with players and coaches on the basics of both teams plus traits and oddities.

There was one story in particular that Brando picked up. A San Jose State assistant coach, Alonzo Carter, had danced with MC Hammer.

Covering smaller schools requires information of a broader scope because as Tim says, “You feel a need to introduce the country to them.”  But Covid reared its ugly head. Complications involving Boise State football forced the game to be cancelled. And yes, all the prep work was for naught.

Fortunately, the two teams would meet in the Mountain West Championship at the end of the season and Brando and partner Tillman had the platform to use some of the colorful information they picked up earlier. At last, Tim was able to share the story of assistant coach Carter who danced with MC Hammer. A video of it actually went viral earlier when Carter broke into dance at practice. See, “U Can’t Touch This” was played, and the former MC Hammer backup dancer couldn’t resist.

But most anecdotes are not always told. For that matter, Brando estimates that 75% of what he prepares for prior to a telecast will never be referenced. While much of the information may be interesting, he says that you must use judgement when calling a game. The best broadcasters don’t force notes. They let the game come to them. For that reason, only what is most important and appropriate during the flow of the game is used.

Thursday marks the day that Brando flies to the location of the game. By now the boards should be done, and on Friday, it is time to meet with the coaches. This allows Brando to get the most up-to-date doings, when info is fresh and makes for good talking points on-air.

To make the most of his access to the coaches, Brando stresses the importance of building relationships. “That’s what the business is,” he says. Building trust with the people he covers has served Brando well. In one instance, former Florida coach Steve Spurrier revealed to him a trick play that the Gators would run on the first play of the game (which incidentally meant the production team had to wait until after the play to introduce the lineups).

Then it’s college gameday. Brando arrives at the stadium about three hours before kickoff. He gets a feel for the field conditions, says hello to any players and coaches he can and gets as many last minute quotes or tidbits for the broadcast (of course these opportunities were mostly prohibited during the 2020 season when all communication was limited to Zoom). Then the SIDs come back to meet Tillman and Brando in the booth 30 minutes before game time. They go over the spotting board one more time, making sure all information is correct, as well as name pronunciations and anything Brando or Tillman want to go over one last time.

Then, it’s finally kickoff. But while the bulk of the work is already done, the most important part has just begun.

The broadcast booth is not really the way it appears on TV. Activity is far more choreographed than you might imagine. Brando, by himself for instance, cannot see everything all at once. So he uses a spotter. The spotter points out things and identifies players involved in the action to help Tim along with the call. The spotter sits to his right. On his left is his statistician who feeds him any relevant numbers he may need.

And of course, holding the other microphone is the color commentator, his partner, Tillman. They have built years of chemistry and are familiar with each other’s preferences. They use nonverbal communication like a tap on the arm or a wave to signify that they have something to say.

When the game is over, the broadcast and production team get back to the hotel for dinner and a couple drinks. They enjoy each other’s company and unwind, growing some of that chemistry that comes through on the air.

So how does a college football broadcaster know the statistics and the life story of that second string defensive back? Well, preparation. Preparation that is truly 24/7, 365. There is no limit on consumption of information and content, and there is no work-week in the world of network broadcasting. As Tim Brando puts it, “This job is not an hourly job or a seasonal job, it’s a way of life.”

What a marvelous piece. Thank you.

I remain amazed at the broadcasters who do two or more games a weekend. I think back to Lindsey Nelson for four years doing Notre Dame Saturdays, the NFL on CBS Sundays, and then Monday Night Football for Mutual. I read that he could wipe his mind clear at the end of a game, and that was key to him. I also think of Vin Scully telling another broadcaster he would be reciting the names and numbers to himself as he shaved!