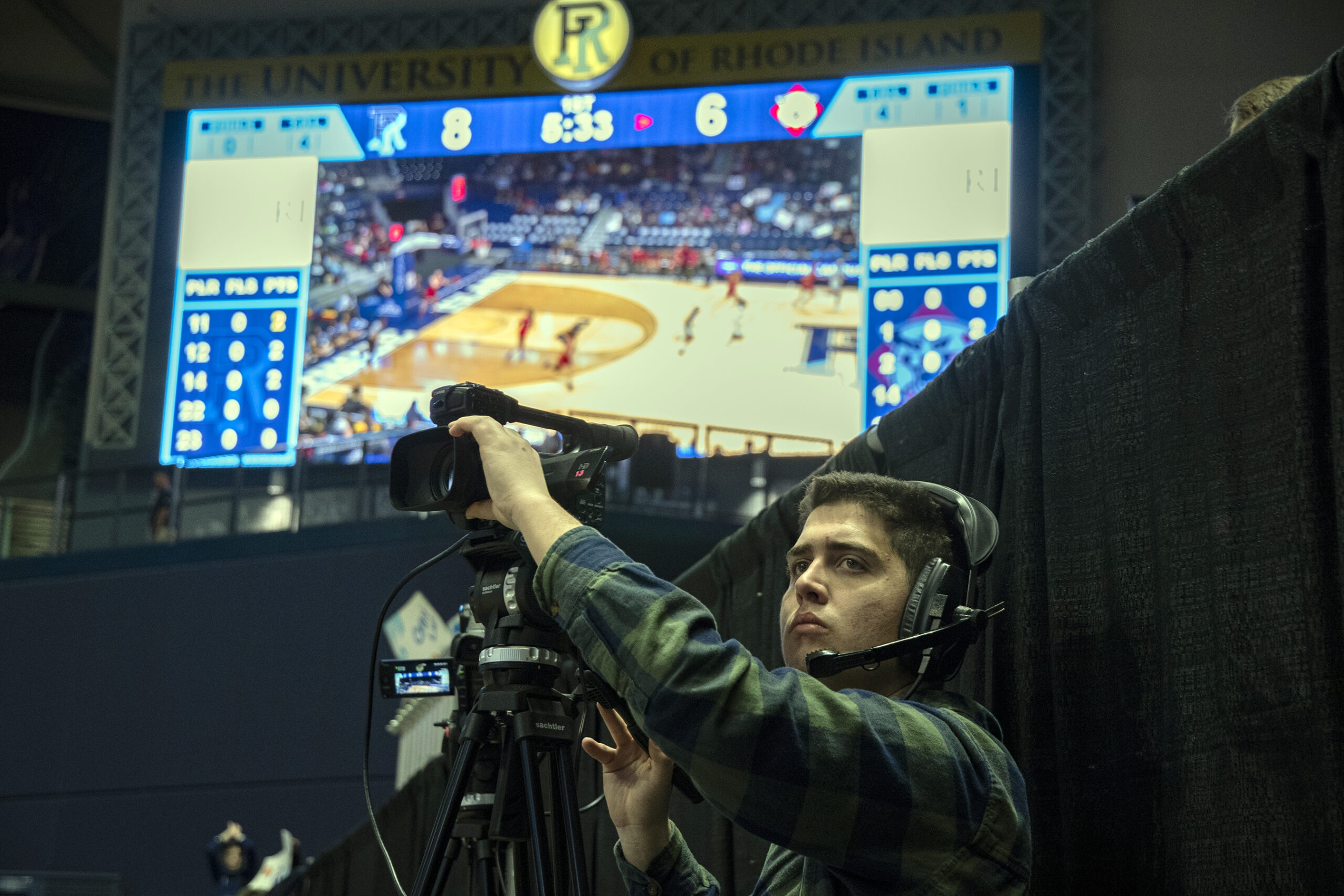 During the last 25-30 years, Fordham University in the Bronx has elevated its broadcast curriculum. Having an over-the-air FM radio station on campus for roughly 70 years hasn’t hurt,  especially one with Vin Scully’s fingerprints. If I had to identify the best ever,  it would be Vin, of course. No substantiation necessary.

It’s  followed in no particular order by Michael Kay for his diverse accomplishments; Mike Breen, now considered the Voice of the NBA, Sal Marchiano, a fixture and mainstay anchor on New York television sports and one of the first voices on ESPN, Spero Dedes, who tells stories nicely and descriptively – without yelling, plus the Lakers and Knicks.

Much of the recent and increased representation of Fordham University in sports media are attributable to two people, Bob Ahrens and Marty Glickman. Ahrens was a radio man who went back to the old days. He had the passion and imagination for the theater of the mind. Bob knew Marty from the business and had tremendous respect for him. Glickman had tutored so many sterling voices from Marv Albert to Bob Costas. Once settled at Fordham, Marty took Spero Dedes, Charlie Slowes and many others under his wings.

Ahrens, who retired some four years ago, said in the school publication, “Here, at One on One , I help others make the transition from student to adulthood. It’s part of WFUV’s mission to train Fordham students. It’s great to see where they start, and where they wind up in four years. And once they graduate, it’s also great to see how far a lot of them go.” One on One runs once a week. It’s the longest running sports talk show in New York.

Of the eleven on this list, only ten were announcers on the school station. John Andariese played hoops at Fordham, before being hired by MSG.

Knicks and Turner voice through the years. He brought a contained enthusiasm with him to each broadcast on TV or radio. I don’t judge anyone by their bank accounts. But I got to know John a bit when he started his own ad sales business, representing sports programs to ad agencies and so on. He built his business, knocking on doors. I did much of the same through my career. It requires lots of pushing, persisting, talking and urging. Marv Albert and he were close. When Marv moved to Knicks’ TV from radio, he convinced the top folks in MSG’s hierarchy to bring the well groomed Andariese with him. The bosses acceded.

Breen enjoyed a quick start in Poughkeepsie, calling Marist basketball in the early 1980s. He was then hired by WNBC Radio which evolved into WFAN in 1987. He’s a good man from a convivial family. From what I can remember, he began as Dave Sims’ backup on his evening sports-talk show in NY. Mike’s likeable, prepared and talented on play-by-play. He did the NFL fleetingly for both Fox and NBC. Basketball was his first love. He rarely if ever makes mistakes but he suffered from Covid this past spring, missing a couple games during the Finals and he couldn’t help but getting a bit sloppy. Still very well liked.

After getting his degree from Fordham, Chris worked his way up the ladder. From New Jersey to Brooklyn he’s done the NBA. The NJ Nets, the Brooklyn Nets, NFL broadcasts on national adhocs. Carrino backs up Bob Papa on Giants’ football broadcasts. He suffers from MS Multiple-sclerosis. Still tons of emotional energy, Chris’ production is encouraging. His weakened medical condition from time-to-time curtails his travel but when he’s behind the mic, you’d never know it. Carrino paints a very uncomplicated picture without rocking the chair. His energy and perseverance, day-to-day, is inspiring for a man dealt a challenging condition.

The Bronx boy was the color commentator on the Football Giants broadcasts alongside Marty Glickman starting in 1967 for eight years. For a couple seasons, Marty called the play-by-play and Chip told the audience about the defense. Cipolla originally began on WNEW in the early 1950s, while the station was highly rated playing musical standards. “The Make Believe Ballroom,” on WNEW had a 25% share of radio’s audience. Cipolla did morning sports and his name was widely known across town. The station’s hosts were commonly known throughout the city, men like Gene Klavan, Dee Finch and Gene Rayburn. In the early 1980s, Chip was enshrined in the Fordham University Athletic Hall of Fame.

The Jerseyite is a pleasant listen. Between, CBS, Turner, Knicks, Lakers and a snap here and there of college football and weekly NFL appearances, his plate brims. An ’01 FU alum, Dedes also does Chargers’ pre season on TV out west. Dedes doesn’t steal the thunder. The broadcast is not about him. He’s a pleasant treat.

John has done varying work, many hosted by Giannone exclusively. His work is well liked and generally produced from a Rangers’ lens. MSG seems to like him. He was formerly with CNN, the Daily News and the New York Post. John started as a researcher for CBS in 1985, after matriculating from Fordham.

He can do just about anything and that’s what keeps him going. In 1982, he was hired by the NY Daily News and progressively building his prominence, earning more TV and radio assignments and breaking stories. In 1987, Mike moved to the New York Post. In time, he joined John Sterling in the Yankees’ radio booth. Later he unburdened himself from Sterling, moving to Yanks’ TV. Kay also does a popular ESPN Radio afternoon talk show aired in New York. It took a while to extend nationally, yet Kay does ESPN2’s alternate Sunday Night baseball telecast.

This doesn’t happen very often. I believe Sal’s the only man to work as a TV sports anchor in a major market and at some point or other on every station in New York. Sal too trained under Glickman. He even spent time at ESPN during its embryo. It didn’t exactly work out. On his last telecast, Sal quipped: “Happiness is Bristol in my rear-view mirror.” Marchiano did Rangers’ hockey briefly on WOR TV.

Papa will never embarrass you. As a listener, you’ll always know what’s developing down on the floor, ice or field. Bob did some network play-by-play and in fact did Thursday Night Football one season too for the NFL Network. His best sport is golf where his delivery is relaxed. He also grows on viewers and broadcasters in time. Papa hosts shows for SiriusXM Sports.

He can do baseball or basketball fluidly, informatively and is very well prepared. Slowes’ roots are in the New York area. He descended upon Washington, D.C. in the mid 1980s to do Washington, (Bullets then), Wizards (now). When baseball arrived in Tampa Bay, Slowes was one of the club’s fresh announcers. When an opportunity opened later in DC, he returned to call the newly placed Expos, now the Nats, (from Montreal).

From what I gleaned during my limited conversations with Vin about WFUV, it seems he helped develop the conceptual framework of how the station would function. That was in the late 1940s. It was the advent of the school’s radio station, He told me that one of the things he contemplated doing when graduating was becoming an entertainer, starting on radio. It never eventuated. Baseball was his thing.

One thing I can tell you for sure is that after Scully called Mike Breen to congratulate him for getting the Gowdy Award, the NBA’s top voice, Mike was ecstatic. At that point, Mike said to me, “Wow, that was very, very thrilling.”

Talking of Vin, I heard something nicely done by Mets’ radio man, Howie Rose. He described a slide into the bag by the runner: “He swam into the bag.”

This is great! One other, if I may: Bill O’Donnell, who did the Orioles with Chuck Thompson, 1966-1982. He also did baseball, football, and basketball for NBC. I think he graduated from Fordham the same year as Vin, and then did Syracuse sports for years until he got his shot with Baltimore.

I love this story: In 1969, the Orioles made the World Series for the second time in four years. O’Donnell did it. I heard Thompson gave up the assignment so he could do it.

In the discussion of Chip Cipolla, WNEW radio and the “Make Believe Ballroom” it should be noted that it was created by a broadcast pioneer named Martin Block and was most famously hosted by William B. Williams (10 to 1 Monday through Friday). A more silky voice you’d be hard pressed to find. Plus it is arguable that William B (as he was known) coined the nickname of “Chairman of the Board” for Frank Sinatra.