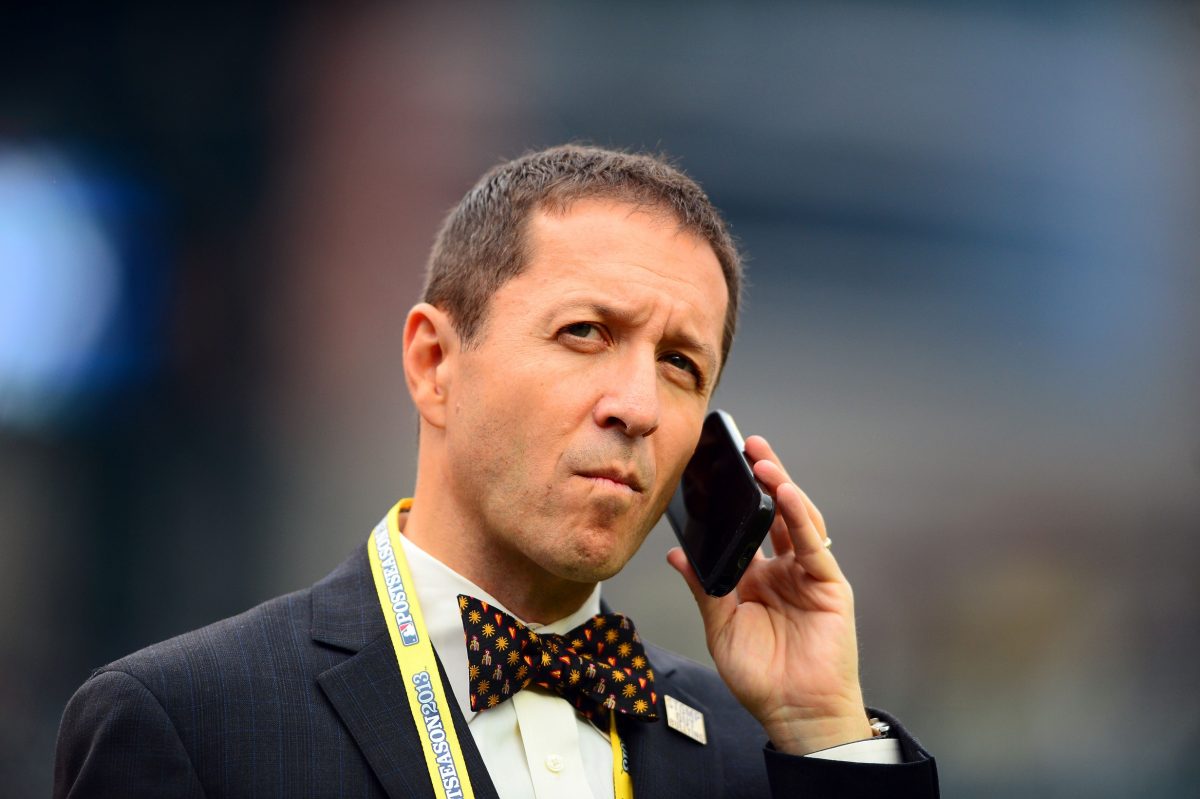 On camera, an unmistakable bow tie has come to identify Ken Rosenthal. He wears it stylishly, whether on the field for Fox Sports or in the studio for MLB Network.

Rosenthal is not the first to don flashy attire on-air. When Lindsey Nelson started calling Mets games in 1962, the year that both the New York baseball team and Rosenthal were born, he bought every garish sports jacket he found in his size. Color television sets were beginning to sprout and the Mets were scheduled to be on TV a ton. It’s how Lindsey distinguished himself visually.

Joe Buck, Ken’s play-by-play colleague at Fox, expressed his respect and gratitude for the analyst’s dedication and thoroughness. “He has more integrity in this business than anyone I’ve ever met. He is thorough. If he says it, it’s right,” Buck said. “He does ten times more work than anyone on our crew and shares it all with us, to make our broadcasts better.”

Ken knew early that he loved to turn a word so he began his career working in a couple small markets, first for the York Daily Report in Pennsylvania and then for the Courier Post in Cherry Hill, New Jersey. His career progressed nicely when he was hired as the beat reporter covering the Orioles for the Baltimore Evening Sun and in 2000 as a baseball writer for The Sporting News. In 2005, he joined Fox where he both wrote online and reported on-air.

In June, 2017 Ken was thrown a curve ball when Fox announced the elimination of its print section. Because Rosenthal considers himself a writer first, he began posting on Facebook. He now fulfills his love for the printed word, serving as a senior writer for baseball for The Athletic, the subscription based online publication.

Once a writer, always a writer. Asked which he enjoys most, the studio of MLB Network, on the field for Fox or penning a story, there was no hesitation. “I still get the most satisfaction from writing a good story, not a breaking-news tweet, an actual story. Could be a feature, an opinion column, a story that reveals new information, anything.”

You’re a New York boy, reared on Long Island. Who did you root for?

I was a Mets fan. To answer the obvious follow-up, I am not a Mets fan anymore, or a fan of any other team. People have a hard time believing this, but you lose all of that once you do this professionally.

Was baseball always your first love? Were there other sports that stimulated you?

For many baseball writers, the sport was their first love. It wasn’t that way with me. I liked and followed all of the major sports. When I began my career, my sole goal was to cover a team in one of the four major professional sports leagues. It just so happened that my first big job was covering the Orioles for the Baltimore Evening Sun. Once I started writing about baseball every day, my passion for it deepened.

Who were your favorite writers growing up?

Mike Lupica and Peter Vecsey as a kid, and if we’re not including sports writers, Jimmy Breslin. After I started college (Penn), I really looked up to all of the sports writers at the Philadelphia Daily News and some at the Inquirer, too. Rich Hofmann had preceded me at Penn (he graduated the year before I got there) and he was a mentor and role model. Mark Whicker was, and is, one of my favorites as well. Everyone at the Daily News during that period – the early 1980s – was amazing.

Writing seems to be the one constant through your career. At what age did you know you wanted to write?

By my senior year of high school, I knew I wanted to work for a newspaper, whether in news or in sports. At the time, I didn’t have a preference. True story – I ultimately chose sports because I thought the sports writers at Penn were cooler than the news writers. You really couldn’t work in both departments. It was a good call on my part. Some of the friends I made on the sports staff at the Daily Pennsylvanian remain some of my best friends today.

What’s more challenging, facing a blank page and a deadline for a newspaper or doing a perfect interview on Fox in an economy of time?

This is an excellent question, but allow me to re-set the parameters! I don’t work on deadlines at The Athletic (though occasionally I try to write quickly) and doing the perfect interview is NOT the most difficult thing I try to accomplish on Fox (the live standup just before first pitch in a postseason game is the most challenging). So, which is more difficult, writing something really good in say, an hour’s time, or doing that live standup? I would say writing well quickly. It’s not something that has ever been one of my strengths. I’m in awe of people who can write a brilliant news story or column in 30 minutes or less.

After Fox went exclusively to video, your pen was usurped. You’ve always enjoyed turning a word. Why The Athletic?

My pen wasn’t usurped – I even wrote for Facebook for a while! But yes, if at all possible, I was going to find a way to write. I didn’t have many options. It’s no secret that jobs on the print side are shrinking. The Athletic certainly was not THE ATHLETIC  then. I think we were in only five cities. Seth Davis and Stewart Mandel had come aboard, or were coming aboard, but back then the site certainly was not what it is now, less than two years later. At the time, I never imagined it would expand as quickly as it did and become such a force so quickly.

That said, I did have more traditional options that I could have pursued. I guess I also could have waited for other options to develop. But the sheer quality of The Athletic excited me. The idea of possibly helping revive our end of the business excited me, too. I was quite upset by the whole “pivot to video” concept, the idea that the written word was dead. I didn’t believe that for one second. I believe – if nothing else – we’ve proven people still want to read.

A few other things: I previously had interviewed with our chief content editor, Paul Fichtenbaum, when he was the top editor at Sports Illustrated. I had a great deal of faith in him and wanted to work with him. And the fact that I had other jobs at MLB Network and Fox enabled me, at this stage of my career, in my mid-50s, to take a chance. My family – my wife and son, in particular (he is our oldest; all three of our kids are in their 20s) – very much encouraged me to go for it. It might be the best decision I ever made.

ESPN had a head start on developing localized sports websites. What makes you think that The Athletic which is behind a paywall can succeed where ESPN has not?

I don’t know that I have that answer. I don’t know the particular challenges ESPN faced. What I have come to learn is that many people today are accustomed to paying for quality content, Netflix being perhaps the prime example. We’re the sports-journalism version of that model. People occasionally say, “I won’t pay for sports news.” That’s fine. Anyone familiar with The Athletic knows it is a far different experience than a site that regurgitates scores, aggregates stories, etc. We do deep and original stories in every sport, every single day.

Now the loaded question. Baseball attendance is suffering. The game is losing younger fans. Will it ever recover?

Attendance certainly is down. Attracting younger fans certainly is a challenge. But suffering is a relative term. Baseball is a $9B-$10B industry. I do believe the sport needs to implement changes to bring more action on the field and more competitive integrity off it (too many teams are holding back as they rebuild). But on the whole, the sport remains quite popular, if not necessarily in the same ways as in the past – local TV ratings, for example, are quite good. A few tweaks, and baseball might be in an even better place.