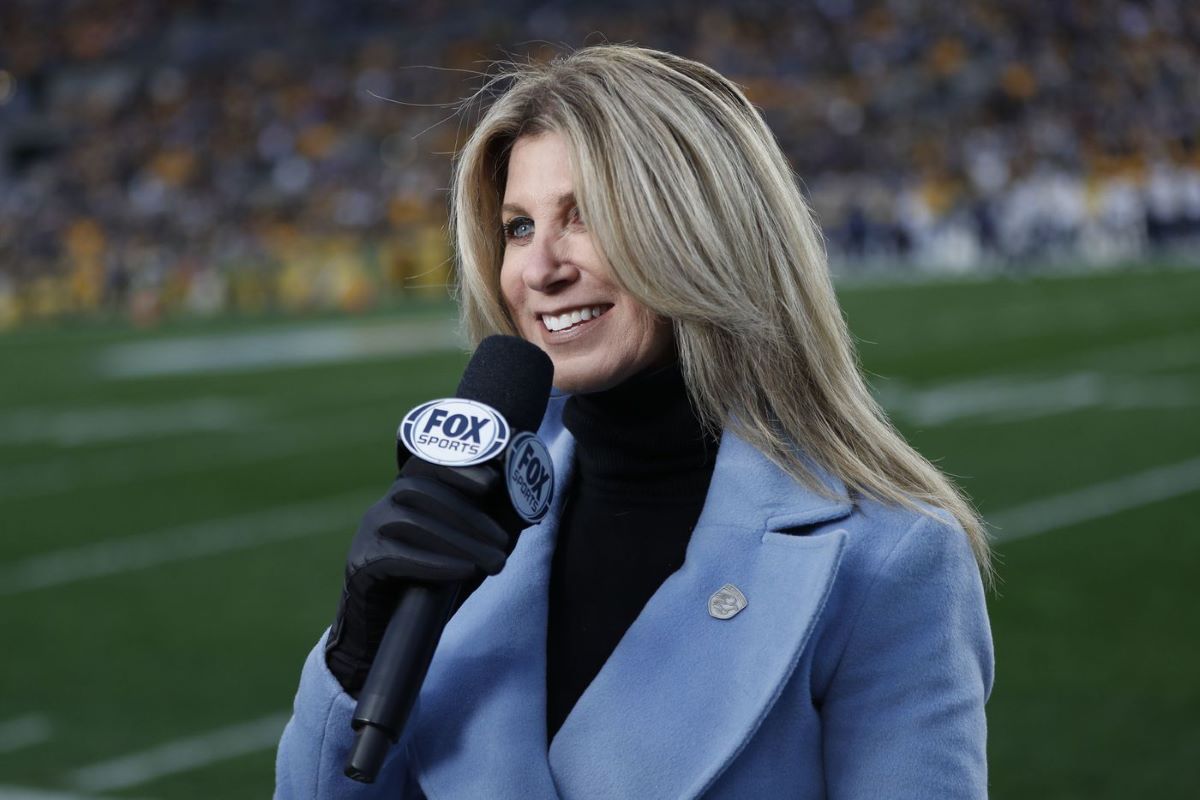 Laura Okmin, working NFL sidelines for Fox Sports. She's proud of her 30 years in the business. When Okmin began her career, she was warned to have a Plan B later in her life.

Pushing through the gender barrier, Laura Okmin eventually established herself as a visible and seasoned sports reporter for Fox. She joined the network in 2002 and continues to cover games on the NFL sidelines and serve as a contributor to Fox’ rich assortment of studio programming. Okmin also does work for Westwood One which has national radio rights to NFL play-by-play. 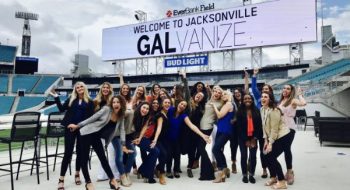 Like other talent, her successful career required a strong commitment. The journey began in Montgomery, Alabama where she cut her teeth on both sports and news. There were no guarantees.

Laura soon made her way to Atlanta where she joined the Turner family, anchoring sports for CNN and following the Braves. In the thirty plus years since, she has covered the biggest names on the biggest stages. Her resume reads like a list of marquee sporting events. Think ten Super Bowls, two Olympics, multiple NBA Finals, World Series and MLB All-Star Games.

Laura’s passion for sports began while growing up in Chicago, a city that loves its sports. But her formative years were before many female sports reporters helped fill bylines in newspapers, had their voices on radio or their faces on television. In the 90s, during the Jordan championship years, Okmin had an opportunity to show her wares in her hometown, covering the Bulls for SportsChannel.

Okmin describes the business of sports as “selfish.” Like others staring out, it was about growing her career, building her skill-set and elbowing her way up the ladder. It all worked out nicely. But years of focusing solely on herself left a void. Okmin thought about touching others and accomplishing something more fulfilling.

Ten years ago, she formed an organization aptly named “GALvanize.” It enables women in sports to network and interact, to exchange ideas and mutually inspire others. Okmin is now using her decades of experience to help other females who want to make their marks in the business. She says it’s working and that GALvanize now transcends just on-air talent. It serves the broader world of women in sports communication overall.

GALvanize’s role is to educate and assist the next generation of women trying to find their paths. It does seminars, forums, training session and conducts boot camps to help those women who are so inclined.

During her rookie days through her early years on camera, Laura had to fight her way through the trenches. There weren’t many women whom to contact for advice or to use as sounding boards. So she’s overwhelmed with joy now by being able to respond regularly to a motherly calling for help and career guidance. She continues to watch happily as women in sports become more visible.

To extend her own reach beyond the microphone, Okmin started LO Productions producing PROfiles, a 30-minute series introducing NFL personalities off the field. It aired on FSN. Okmin also penned a children’s book in honor of her mother, “Mommy Has Cancer.” It was published in 2002.

Okmin is a 1991 graduate of the University of Kansas where she studied journalism. Among others, Kansas has spawned Kavin Harlan, (CBS and Turner), Brian Seiman (LA Clippers TV), Gary Bender (retired, CBS Sports) and Bill Kurtis (retired, A&E Network)

We had a chance to do this Q&A with her:

What stimulated you to pursue a career in sports broadcasting and at what point of your life did you begin?

My mom told me as a very young girl that I was a storyteller. I didn’t ask her to read books to me – I’d ask her if I could tell HER a story and make her sit with me as I told it, until I fell asleep. I gravitated to anything with writing and was told continuously that “you sure do ask a lot of questions.”  So journalism was pretty clear to me from a young age.

I grew up loving sports but never put that journalism and sports intersection together until college – because I didn’t see women doing sports. I took a sports journalism class in college (I was the only woman in the class) and fell in love with it. The greatest stories to tell are sports – there are natural heroes, villains, winners, losers and adversity to overcome. It’s a storyteller’s gold.

Where did you grow up and who were your broadcast heroes?

Grew up in Chicago with my broadcast heroes being mostly men – because that’s what I saw in sports. I loved the storytelling of Bill Curtis, who was a Chicago legend, studied Barbara Walters interviews and marveled at how she could get people to open up and third, Jeanie Morris who was the first woman I had ever seen cover sports.

If you had to identify five women broadcast pioneers who would they be?

Jeanie Morris – Her first byline in 1968 was required to be, “Mrs. Johnny Morris” – who was another sports legend in Chicago. I mean, that’s what she was up against.

Lesley Visser – The first woman NFL analyst on TV, but has covered EVERYTHING. I’m now blessed to know her but still get nervous when I talk to her. She is a true legend and opened the door for all of us.

Phyllis George – One of the first women to have a prominent role in sports coverage. We saw her continuously and that was important.

Jayne Kennedy – The first Black woman to host a network sports broadcast on television. That was 1978 and we still don’t have enough women of color in our business.

How has the female presence in sports reporting changed through the life of your career?

I used to go to big events and count the women I saw on one hand. Then it was two hands, and that was amazing. But now? I can’t count them – there are many. That’s wonderful but I still CAN count women executives, decision makers, content creators and executives who HIRE. It’s not enough to have a seat at the table … we have to run tables. That’s when we’ll see lasting and MEANINGFUL change.

What inspired you to start GALvanize?

I started seeing more women in the business, which was terrific, but I also kept seeing them thrown into situations that I thought were too fast. I saw them get thrown in and thrown out just as quickly because they weren’t ready.

GALvanize started with me simply asking, “How can I help?” It began with 20 women in a 2-day boot camp with no name or vision – just, “How can I help?” Now, over a decade later, we’re over 2,000 women. On air, behind the scenes, PR, agents, producers – we’ve grown to all women in sports from 18 to their 40’s. The mission is simple: To give these women something I would have killed for … a network of women to help them navigate this business

What do you tell women groups you address?

What I hope young women look at isn’t necessarily what I’ve done, but how long I’ve been doing it. I didn’t see women over 30 when I started – I was told I needed a Plan B for when I got older – so I want them to see women crushing it in their 40’s..50’s…60’s – like men do.