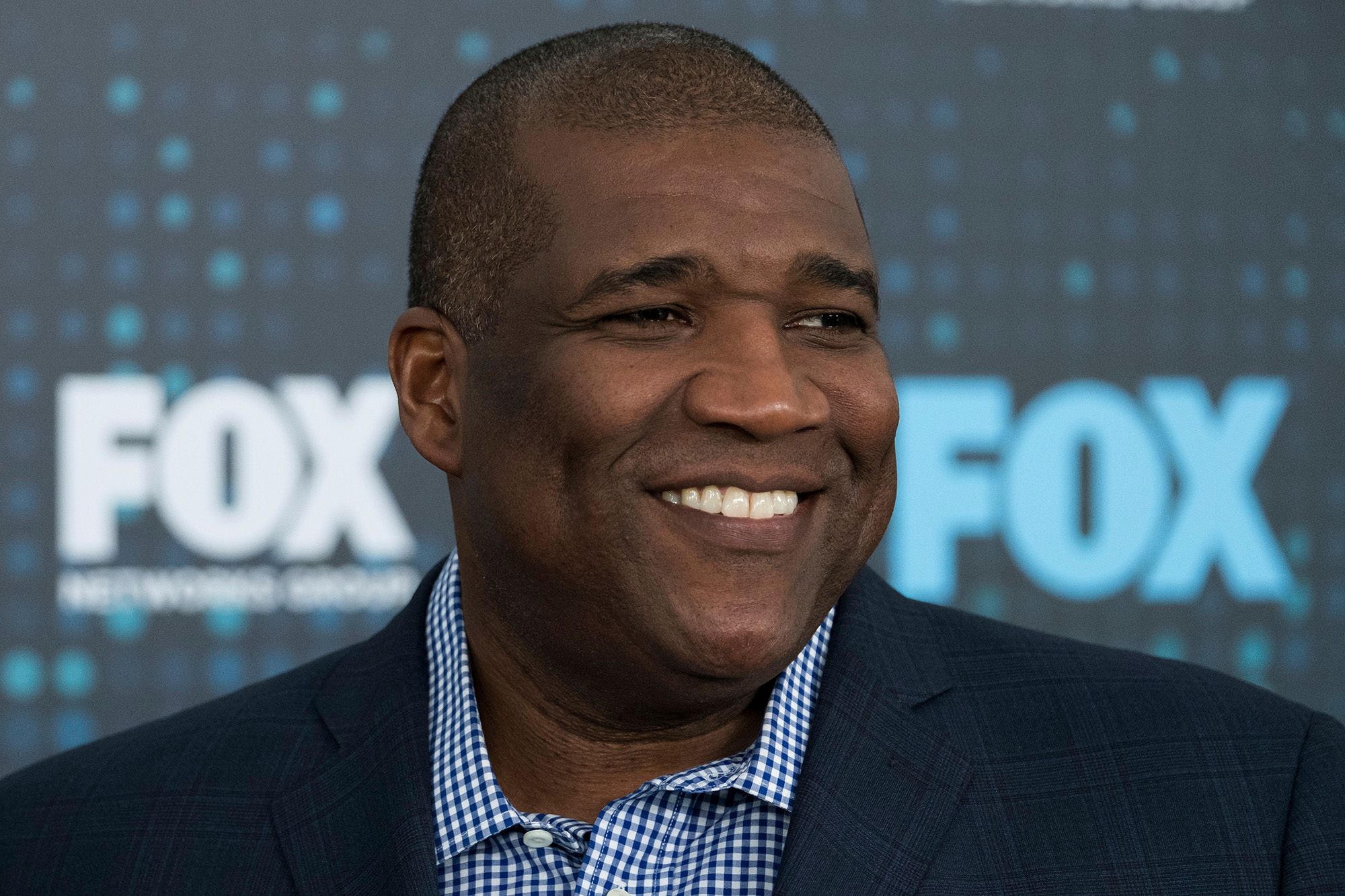 Curt Menefee grew up in Atlanta and was schooled at little Coe College in Iowa. He's anchored Fox' NFL pre and post game shows since 2006.

Curt Menefee’s climb to one of the most visible sports positions on network television didn’t take very many unusual twists. Like successes in any endeavor, it took smarts, hard work and a little bit of luck. There were no uncles or family members in the business to broker a big break.

For that matter, Menefee didn’t even know that he wanted to do on-air work until he had already embarked into television. Curt had an interest in the media business in high school but at the outset it was production and behind the scenes work that intrigued him.

The husky voiced broadcaster with an identifiable rasp grew up in Atlanta where baseball was his first sports love. He has early and fond memories of following the Braves as a kid, listening with his grandparents to Milo Hamilton call games on the radio. In his early teen years, he was weaned on play-by-play consuming  the wonderful Turner trio of Ernie Johnson, Sr., Pete Van Wieren and Skip Caray.

After some early work in Iowa and before he wound up fulltime at Fox in 1997, Menefee made circuitous stops in Dallas, Jacksonville, Madison, Wisconsin and New York. It was there, in the big city where he got his break, hosting MSG Network’s Sports Desk and later anchoring sports for Fox’ New York flagship, Channel 5.

At Fox, he’s been given diverse assignments, from sideline reporting to play-by-play, for the NFL in-season to NFL Europe.

When James Brown left Fox in 2006 to return to CBS, Menefee got the big chair, first co-hosting, Fox NFL Sunday with Joe Buck and then hosting it on his own. Menefee has held the lofty role since, collaborating with essentially the same panelists year-after year. There’s nothing like stability, camaraderie and a symbiotic culture.

Menefee authored a book in 2016 with Michael Arkush, Losing isn’t Everything: The untold stories and hidden lessons behind the toughest losses on sport history. It’s a motivational book that got some outstanding reviews. It’s about athletes who’ve suffered heartbreaking defeat and how they’ve responded.

In addition to the great exposure Curt gets each fall Sunday through his NFL studio work, he now calls play-by-play for Fox’ XFL coverage.

We had a chance to talk about a variety of topics from the recent Super Bowl to his juggling act in the studio and his new assignment with football’s latest league.

Tell me about the recent Super Bowl experience in Miami.

The assignment was a marathon. I arrived the Sunday before and I was on air every single day through the Sunday of the game. And if I wasn’t broadcasting on-air myself, I was in production meetings or being interviewed elsewhere.

Super Bowl on television is about serving dual constituencies, the football initiated and those who don’t know a third down from downtown.

There certainly are lots of people watching. In the final half hour of our pre-game programming, there were 84 million viewers. As we got set for the game, we were adding about a million viewers per minute! Our producer Bill Richards does a great job of walking the fine line. Yes, features for those with just a passing interest and something different and new for those in the know, like the fans of the participating teams.

You do both play-by-play and studio work. What’s your preference?

It’s like who’s your favorite kid. The two require different muscles to flex.

In the studio, I’n with five  of my best friends. There, you get a 30,000 foot view of the league. Call it macro. Doing play-by-play is micro. You have to be prepared for every eventuality. If the left guard goes down, who’s his backup? It’s more of a high wire act. In the studio, it’s a big picture. You’re also given more time to digest developments and collect your thoughts before responding. it’s not real-time play-by-play.

So from the glamour and established success of the NFL, you’re now covering a fledgling XFL, a league trying to make a mark.

From a television perspective, the XFL has a distinct advantage to the start-up leagues of the past. The games on Fox and ABC/ESPN will run at a fixed time each week.

From a football perspective, it’s a legit league. It’s not about entertainment first. For example, Dean Blandino, formerly of the NFL is head of XFL officiating. Another familiar NFL name, Randy Mueller, is head of player personnel for the Houston Roughnecks. Oliver Luck who ran NFL Europe is commissioner.

Is it a challenge for broadcasters to get basic intelligence and information covering the XFL?

Like anything new, it takes time for organizations to get ramped-up. I’d say that at this point we’ve gotten just about everything we need. But think about it, everyone is learning, the coaches, the public relations people and even the general managers. Getting human interest angles about players will come in time. It’s why we get to venues early and interview players at practices. We want to learn more about them.

Longtime Fox analyst, Darryl Johnston is Director of Player Personnel for the Dallas Renegades. Will he continue to do NFL games too?

I haven’t heard anything to the contrary.

This XFL isn’t competitive with the NFL. It plays during the NFL’s off-season. This XFL has the financial backing, corporate commitments from Fox and Disney for starters. It’ll be around. The others you mentioned never had the consistent TV platform. Every game of this XFL is on network television!

On Fox NFL Sunday, you orchestrate an interesting group, those who talk lots like Terry Bradshaw to one who says little, Howie Long .

Yes, there are different personalities and my job is to keep the show moving. I have to know the strengths of the experts by subject matter. I then know which question to pose to whom.

I’ll say to myself, here’s a topic that Jimmy Johnson would be perfect to address. Maybe I know so because we watched a college football game together the Saturday before and he shared insight with me.

We’ve been together a while. It was my 14th season as a solo host. Michael Strahan has been there twelve years and others longer. Other shows change casts frequently. We’ve been a unit for a long time. We have the chemistry and the genuine love for one another. When Jimmy was selected for the Hall of Fame, Tony Gonzalez was happier for him than himself. We all care for one another which cuts down on jealousies.

How did you wind up at Coe College in Cedar Rapids, Iowa?

I grew up in Atlanta. Coe has a good journalism school and speech program. (Alumni include: William Shirer and Fred Hickman.) Yes, it’s DIII and has only 1600 students.

CNN’s Fred Hickman at CNN was pretty big when I was in high school. He and Nick Charles did a nightly sports show in the early 80s that at the time was bigger than ESPN’s. I had an interest in media so I cold called Fred while I was in high school. He encouraged me to go to Coe. I later interned for CNN and learned to prepare highlights and such. I liked it.

In college, in the fall, I reached out for work to John Campbell at KCRG in Cedar Rapids. He had noting available but took my name down. He said he would call if something came up. It did in the spring. He called and asked me to shoot film at Iowa’s spring football game. Later, he asked me to go to Iowa State’s spring football game. John really took me on his wing and I’m grateful for it to this day.

He’s underappreciated. I never understood why he was criticized. The criticism has now waned thankfully.

Fans and viewers are influenced by what they hear in the movies or other screamers who call sports. They think it’s the way it has to be done. Joe’s concise and spot-on. He’s becoming one of the all-time greats.