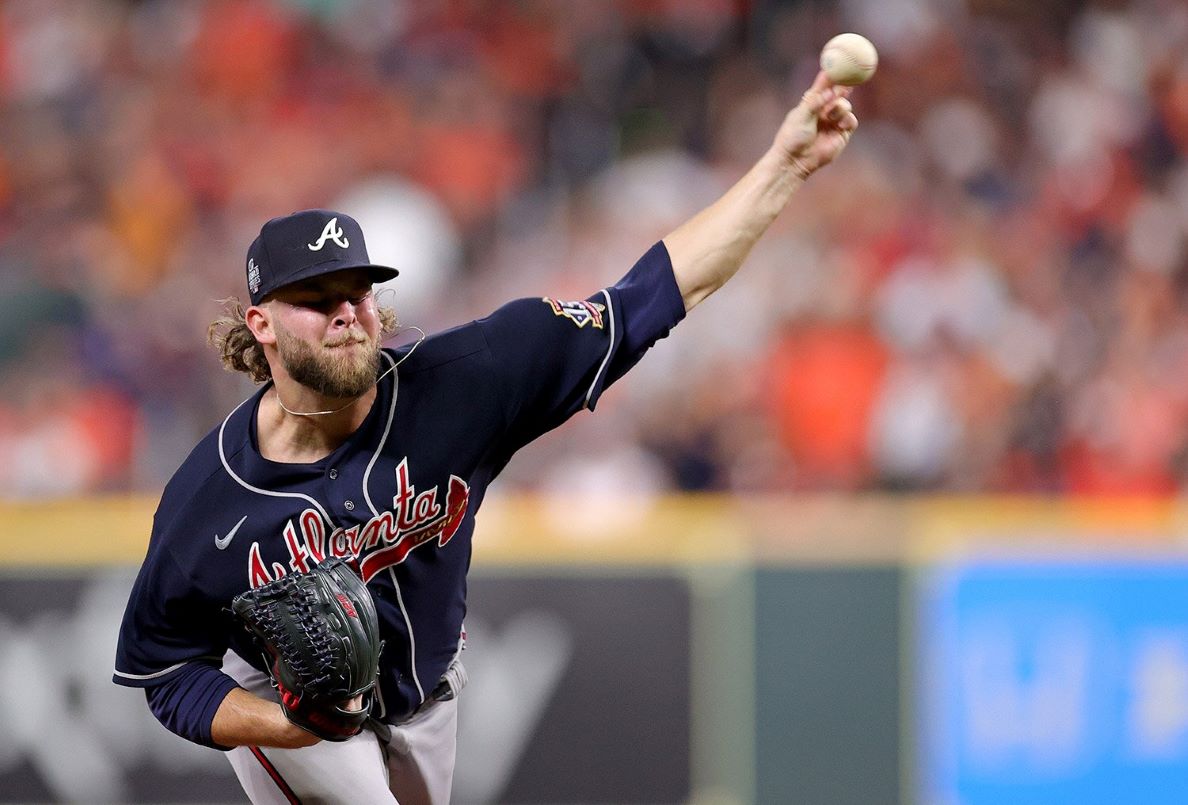 During the World Series, I thought I’d do something a bit different. So I chronicled  and reviewed each one of Fox’ six pre-game shows that led into the play-by-play. The inexplicable nuttiness finally ended when the Astros lost to the Braves in game #6 of the Fall Classic.

When I tuned in the pregame World Series show, I didn’t’ know whether to be disappointed, amused or perplexed. It’s not that I have anything against actor Colin Farrell but I couldn’t figure out why he was selected to be the lead-in to the pregame show whose commentators were an unusual mix, host Kevin Burkhardt, an ex car salesperson from New Jersey, and former players David Ortiz, Alex Rodriguez and Frank Thomas.

Perhaps he was chosen because his twice postponed film will be released in March and that its title is The Batman. Get it? Baseball and bats. No, that couldn’t be the reason he was picked for a baseball broadcast! Just as puzzling to me was his script. It emphasized that baseball is a game of patience. I thought that the reasons that baseball is undergoing so many rules changes is because the commissioner’s office thought fans don’t have the patience to sit through 162 regular season games that can go way over three hours.

Maybe it was because I wasn’t a great whiz in math that I scratched my head when Alex Rodriguez said, “The Braves only won 88 games but don’t let that fool you. They’re a 100 wins team.” In a surprising comment that followed, host Burkhardt gave the betting odds presented by FOXBETSPORTSBBOOK. Which numbers are we to believe, the bookies or the former player?

A few minutes later, Burkhardt, a fine on-air talent, was again acting like the corner bookie, hyping the FOXBETSUPER6 gimmick, which says you can play for free to have the chance to win $25,0000. To paraphrase a famous quote: “Beware of bookies bearing gifts.”

By this time I wasn’t sure if I tuned in a gambling show or a baseball game. Just a minute or so later the Fox screen read, “Odds provided by David Ortiz is a FOXBET sponsored host.”

After what seemed like a night at the casino, play-by-player Joe Buck, Hall of Fame pitcher John Smoltz, Tom Verducci and Ken Rosenthal, the latter two bona-fide print reporters, took to the mics and presented the first bit of intelligent analysis of the evening, and continued doing so throughout the World Series.

But wait. When I thought we would be hearing some serious baseball discussions there was an even longer lead into the game. It was Bill Murray, whose new movie the French Dispatch was opening three days after the first game of the World Series.

It made the telecast seem more like a promo for gambling and movies than a baseball game!

I thought I was watching a movie channel instead of the World Series pregame show when I tuned in the pre-game. The first voice I heard was again Colin Farrell talking about being the best before turning the show over to host Kevin Burkhardt and his three amigos – David Ortiz, Alex Rodriguez and Frank  Thomas – who couldn’t have seemed happier. They acted like all analysts on these types of shows do, they laughed. Any viewer who thought these three former ballplayers would provide some unique analysis had to be disappointed.

An interesting feature introduced by Tom Rinaldi, the Fox sports reporter, provided both the high and low points of this pregame show. The high point: Because we are currently in the year 2021, Rinaldi weaved a story about great World Series moments in years ending in 1s. Accompanying footage from the 1961, 2001 and 2011 World Series were interviews with Joe Buck, and players Jack Morris, John Smoltz and Luis Gonzalez, all of whom played important roles in those World Series. The footage, interviews and comments by those being interviewed were top notch. The low point: The feature concluded with footage showing a blurred field of Thornton Winery grapes being cut and bottled before being poured over the heads of players celebrating their World Series victory. Great viewing for the impressionable youngsters watching. Huh?

Colin Farrell again narrated the intro to the program in a voice fitting for the end of mankind as we know it. Midway through the program Atlanta native Christopher Brian Bridges, known professionally as Ludacris, the rapper and actor, described the spirit of Atlanta. He sounded like a spokesperson for the city’s Chamber of Commerce, neglecting to mention any of the debated racial and voting issues, the latter resulting in Major League Baseball moving the All-Star game this season from Atlanta to Denver. Surprisingly, one of the regular analysts actually said something that might affect the game. A-Rod mentioned that rainy weather prevented infield practice and that might affect the fielders.

Prior to the beginning of the World Series, MLB commissioner Rob Manfred defended the Atlanta Braves’ name and fan celebration, “The Tomahawk Chop,” which has been criticized saying it stereotyped Native Americans. The commissioner said the Atlanta franchise has “done a phenomenal job with the Native American community.” As if to prove his point, the color guard before the singing of the National Anthem was comprised of members of the Eastern Band of Cherokee Indians.

The blueprint changed for this pre-game program. Yes, Colin Farrell still was there and Ortiz was playing his designated Court Jester role, wore vampire teeth as part of a segment asking a few ballplayers what their favorite Halloween candy was. But, probably, because the program was much longer than the usual half-hour telecast there were interviews and comments from World Series players, coaches and managers. A tribute to Hank Aaron was included, even though there was one prior to the start of Game 3.Oh. And the program started late because Fox didn’t cut away from the Colorado-Oregon football game, which ran longer than expected.

Because Fox decided to broadcast the OT football show after the New Orleans Saints-Tampa Bay Buccaneers game, there was an extremely abridged pregame show, lasting only a couple of minutes. When asked what the Houston Astros had to do, A-Rod’s insightful answer was, “They have to score runs.”(What great insight!) And that sums up the keen analysis that was presented as expertise during the entire series.

Colin Farrell, world famous for his baseball philosophy, I guess, was back again to lead off the program. This time he set the stage by telling of the “hopes, dreams and the weight of world. All at stake tonight.” (I guess we can now all relax and forget about the continuing Covid-19 problem.) Even more ludicrous, in my opinion, was the feature about Astros manager Dusty Baker, 72, and Braves manager Brian Snitker, 66, with a story line of them being the two oldest managers to compete against each other in World Series history. Why do I think it was ludicrous? One of the knocks against baseball is it that it doesn’t attract a young fan base. It might make sense to some people, but not to me.

It took the game announcers Joe Buck, John Smoltz, Tom Verducci and Ken Rosenthal to provide what viewers used to see while listening to a game on radio or seeing it on TV- first rate reporting and analysis, instead of what passes as a serious sports event talk on the pregame shows. Too bad that Kevin Berkhardt, one of the most creative of all sportscasters, and one of the best, was relegated to Fox’s version of comedy tonight—the pregame shows of the World Series.

I thought the best of the three former ballplayer analysts was Thomas, and the worse was Ortiz, maybe because he was  directed to play the not-so-funny comic.

However, I thought a major shortcoming was the pregame choice of analysts. If a pitcher was selected instead of three sluggers it might have added a different perspective to the conversation.

Berkhardt, as usual was fine.  He deserved better. So did the TV audience.

For those who are interested: The Atlanta Braves defeated the Houston Astros  in six games to win the championship of Major League Baseball’s self designated world.

Mr. Solomon is made of sterner stuff than I am–I had no desire to watch them, and didn’t. But it seems to me that there’s a historical trend. The NFL Today invented the genre of having personalities, live (I look forward to reading a book by another contributor here, Mr. Podolsky). Fox added to it with its Sunday morning show, but Turner’s Inside the NBA has gone still farther. So everybody is looking for a Bradshaw or Barkley, a Menefee or a Johnson, and then two straight men. I’ll take information with some entertainment, not buffoonery, thank you very much.