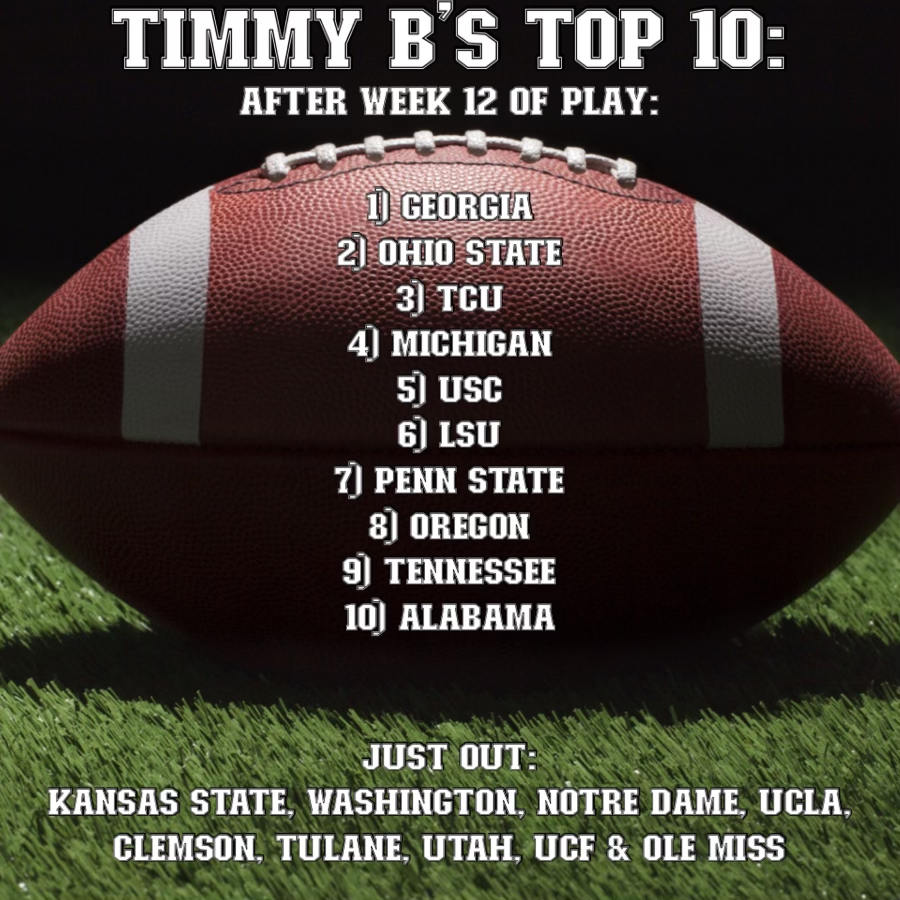 Tim Brando tells it as he sees it. Speaks highly of TCU as you’ll see.

1-Georgia Ya gotta believe not playing any games of consequence down the stretch makes the Bulldogs vulnerable in the SEC Title game. This week? Not so much.

2-Ohio St. The Buckeyes have been banged up at the skill spots all year, and yet they’re undefeated. I see them cruising at home Saturday. (against Michigan)

3- TCU should be #3 (rather than 4 in the CFBPlayoff Standings). Look what they’ve done on the road against Top 25 competition the last two weeks. It’s a complete joke watching this Committee stumble week after week by catering to Pure Playoff Privilege. Iowa St. this week on FOX Sports will show why how strong the cellar of the BIG 12 really is!

4- Michigan as injured as the Buckeyes are, so too are the Wolverines. The Michigan Defense may keep it close for a while but in the end they’ll need a close finish and hope the committee rewards pure playoff privilege to their brand as well!

5-USC Yes, it’s my opinion that one loss matters over two losses this time of the year. It’s not as if LSU can’t jump the Trojans, but I’ll need to see the SEC Title game win, before doing that! This Committee has zero credibility.

6-LSU There’s a clear path for Brian Kelly’s Tigers and whether they’re fifth or sixth this week is of no consequence.

7- Penn St. This is the Lions’ ceiling, but they deserve it over everyone else because in my opinion of the product they’ve put out there the past two weeks. They dominated a Maryland team that stressed out Ohio St. last week.

8- Oregon was the best one-loss team in America. Now, they’re the best two-loss team. They bounced back against a quality Utah team. I remain impressed with Dan Lanning in his first season.

9-Tennessee The Vols stunk it up at South Carolina, but it’s not as if the Gamecocks are a walk over at Williams Bruce Stadium.

10- Alabama How this Committee can justify having Bama 7th I haven’t a clue. There’s no reasonable path for them, but the Committee wants you and the BamaFans to think there is!

Rivalry weeks are always fun. So a few things to consider.

1) How much fun is it to think about Auburn’s interim Head Coach Carnell “Cadillac” Williams having a chance to beat the G.O.A.T Nick Saban who owns Mercedes’ dealerships.

2) Clemson is a non factor and have been ranked as such from me all season. The South Carolina Gamecocks come in riding high in the Palmetto State and I’ve got an upset special here!

3) The season-long SEC debacle in College Station mercifully comes to an end this week, but put the #5 Tigers of LSU squarely on upset alert. This could put a damper on the SEC Title game if it happens. I do like the Aggies to cover but LSU to squeeze by and move to 10-2 heading to Atlanta.

4) Finally our two other games on FOX, Iowa St. at TCU, and Kansas at KState, the SunFlower 🌻 Showdown will be great games. The Cyclones defense is outstanding and given their awful season would like nothing better than ending TCU’s Playoff hopes. The Jayhawks are beaten up, but QB Jaylon Daniels looks good to go. They shook off rust in the loss last week to Texas. Kansas State will have to earn its rematch with TCU, in the BIG 12 Title game. Jason Benetti and Brock Huard will be in Ft. Worth calling it on Fox, 4 ET.

Join Spencer Tillman and me Saturday at 8 ET on Fox for Kansas-Kansas State.

The best for the holidays from the Brandos!

Far right is wife, Terri, then 22 years, now 44 years, of marriage. Next to her is Tara who was 10 years old then and is now 32. Tiffany, our oldest, next to me, 17 then, now 39. (Photograph taken in 2000. Pic taken in Studio 43, Thanksgiving weekend.) Tim says, “those two daughters of ours have given us four wonderful grandchildren.” 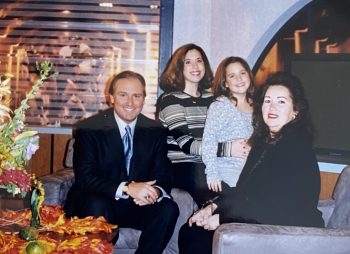