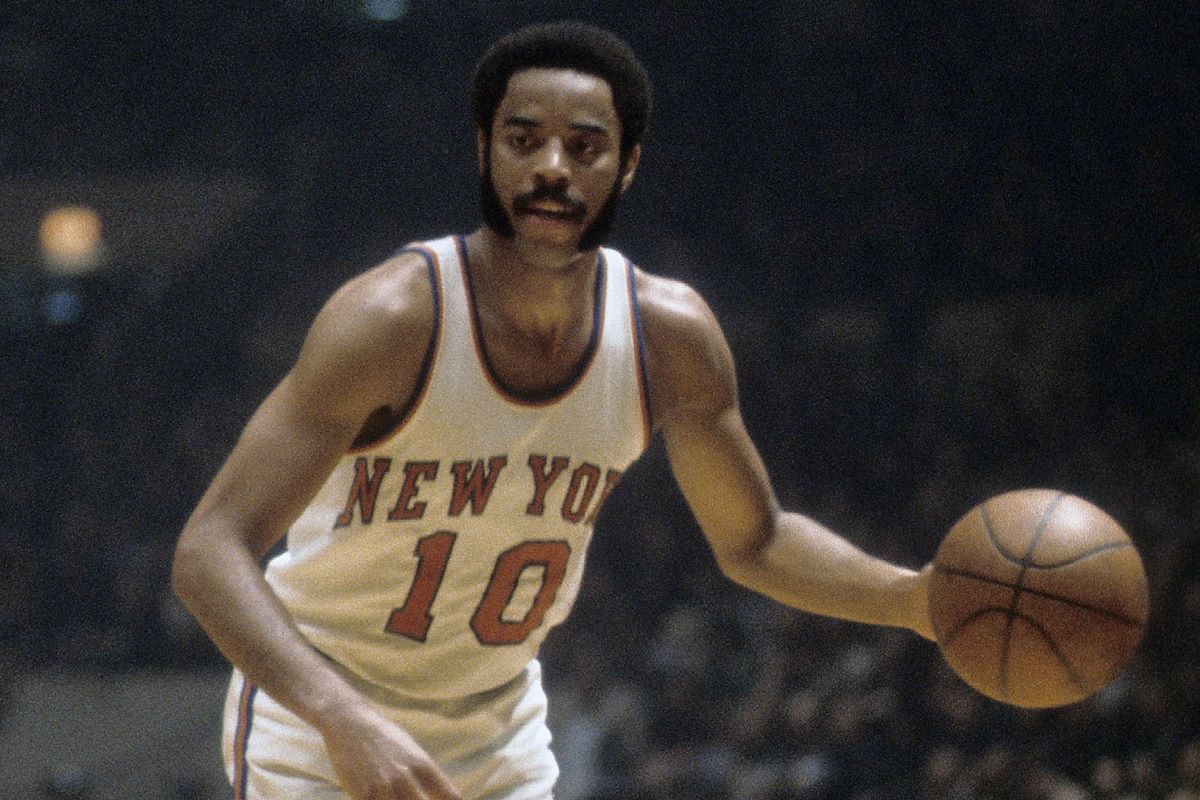 You might have seen that Walt Frazier was bestowed with the Curt Gowdy Award for basketball broadcast excellence. I got to know Walt a bit in the early 1990’s when he joined the Madison Square Garden Network, first on radio and later on television. For that matter, I did a dozen or so Knicks radio broadcasts with him.

He became an analyst on radio in 1989 and later moved to television. His first three seasons he was hooked up with NBA vet Jim Karvellas who seemed to have somewhat of a different agenda from Clyde. Jim was folksy and didn’t deviate much from the game. Meanwhile, Frazier created his own lingo and nomenclature, a mix of words that rhyme. At first, sounded a bit forced. Not everyone immediately embraced his unusual manner. He would spew things off his lips that fans never heard before. But Walt who was loved for his playing days persisted steadfastly and his style grew on fans. Frazier’s chic delivery caught the ears of New Yorkers.

The  Knicks’ standout guard of the 1970s who was the floor-general of the team’s only two championships gained popularity. He stuck to his guns, employing an unpredictable and impulsive vocabulary. It came with a price. The three years he spent with Karvo were a bit uneven but also entertaining. You never knew what you’d get from either one. Walt wanted to shove words out of the thesaurus into the ethers. Never a dull moment. A star spawned by Southern Illinois, a DII school at the time, Clyde electrified the old Madison Square Garden at the NIT when it still meant something in 1967.

On-air, Walt calls out bad decisions on the floor. He’s still particularly hard on under-performing players from the top to the bottom of the Knicks’ roster. He rarely heaps much praise easily either. As nonchalant as they come, Walt might use the word insouciant to describe himself. Later, partner Mike Breen said that Frazier can break down players’ strengths and weaknesses as well as anyone can behind an NBA mic. In time, Clyde became widely popular on New York’s basketball airwaves.

When Karvellas wasn’t re-signed after the 1992 season, Breen came on board for radio and he gave Frazier more on-air runway than Jimbo did. Perhaps the most popular Knick ever, Clyde was soon tapped to move over to TV. Hw brought a fresh dimension to the broadcasts. His rhymes included: “It’s a Ewing doing,” “Oak’s got the stroke,” “Shaq was lurking and irking” and “Melo was posting and toasting.” If a play was asinine, Walt would use precisely that word. Clyde himself was a savvy and heady on-air as he was a floor leader. Walt though was circumspect, careful not to hurt or embarrass anyone.

Radio is generally considered a play-by-play man’s medium and TV, one for analysts. Breen and Frazier have made a good pair on both radio and TV. Raised in Atlanta, Frazier became a New Yorker in short order. He’d take the subway to and from MSG from his Harlem home. He told me that one reason was that cabbies rarely picked up Black people in midtown Manhattan.

A Frazier incident made for great fodder for the late popular WFAN morning man, Don Imus. The Knicks lost a heartbreaker at the buzzer to the Bucks. Frazier thought the broadcast was in a commercial break when he emoted, “Oh Shit!” The profanity was recorded and Imus had fun with it on-air for weeks.

Imus lapped up the day in 1992 when the Knicks beat the Pistons to take a first round playoff series from Detroit. When the two men did the final wrap, Jim complimented the club for winning the series. Frazier popped right in angrily, disrupting Karvo. “What for Jim? They should have killed these guys. There’s no reason to congratulate them. The on-air polemics produced more Imus hysteria. The Great Clyde got some heat from MSG Management. As for Karvo, he wasn’t renewed. No reason given.

“Good call on Tirico. He’s more of an everyday guy, an Alex Trebek even. ESPN would have been perfect, but did he actually want to be ubiquitous?

“I somehow feel cheated by Bob Costas’s career. His play-by-play chops were rarely on full display for any extended period of time. NBC opened a baseball window for him, but for all too brief a time. Would have liked to hear even more of his play-by-play on baseball, and on football. Those hosting roles feel like honorary college degrees. The Olympics? Good night.”

Sixty years ago tonight, Wilt Chamberlain did something, no one else ever has. He scored 100 points in an NBA game. It was against the Philly Warriors in a matchup in Hershey, Pa. It was against the Knicks and no player ever did it before, or has ever done it since. The last few minutes including Wilt’s 100th point is available from the Warriors radio broadcast

Bill Campbell did the play-by-play and color, By Saam. The Knicks couldn’t get on radio then.

ESPNer Anish Shroff was hired by the Carolina Panthers as the club’s new radio voice. He replaces Mick Mixon who’s retiring at age 63. Anish is soft-spoken and his work breezy. He’ll do well. As both an ESPNer and a local team voice, Shroff now joins two other Bristolites, including Bob Wischusen, Jets and Dave Pasch, Arizona Cardinals who work both Saturday and Sunday.

Column contributor Jake Baskin tells me that Shroff is slowly becoming one of the nation’s best Lacrosse voices, like Dan Hicks is for swimming, Joe Tessetore for boxing, Paul Sunderland for volleyball and JP Dellacamera for soccer.

ESPN is sitting on dynamite. It should jump on Al Michaels. But there’s also talk that Joe Buck can join his old partner Troy Aikman on Monday Night Football. If Al and Aikman partner, Uncle Al would likely do at least one more Super Bowl.

Kirk Herbstreit on an NFL broadcast? His colleagues laugh at the very thought. Stay in your lane sir. He could end up on Amazon’s NFL Thursday Night Football. It’s enough that Herbie floods college ball with inanities. Putting a shallow novice in an NFL booth with the dean of NFL announcers, Michaels, is insulting.

Since first donning the headset in September 1972, Al McCoy, the Voice of the Suns, has captivated fans in the Valley for 50 seasons. The Phoenix Suns will honor the legendary broadcaster with Al McCoy Night when they host the Portland Trail Blazers at Footprint Center on Wednesday, March 2, tomorrow.

Has anyone else done 50 years with an NBA team? I think Al McCoy would be the first.

As for Walt Frazier, I enjoy his work. But not to honor Brent Musburger or Bill King is, to use a Clydeism, asinine.

For whatever reason, Jerry Colangelo who weighs in considerably and unilaterally has not made it a priority. The Hall won’t release the names of the voters. It’s done sub-rosa. Brent has also been shunned by the Pro Football HOF. Brent helped build The NFL Today. Furthermore, Howard Cosell who helped debut MNF is nowhere to be found.

The Basketball did add one more award under the Gowdy umbrella than usual. Writer Michelle Voepel who covers college an pro ball and longtime NBC Network Executive Dick Ebersol are also ’22 recipients.