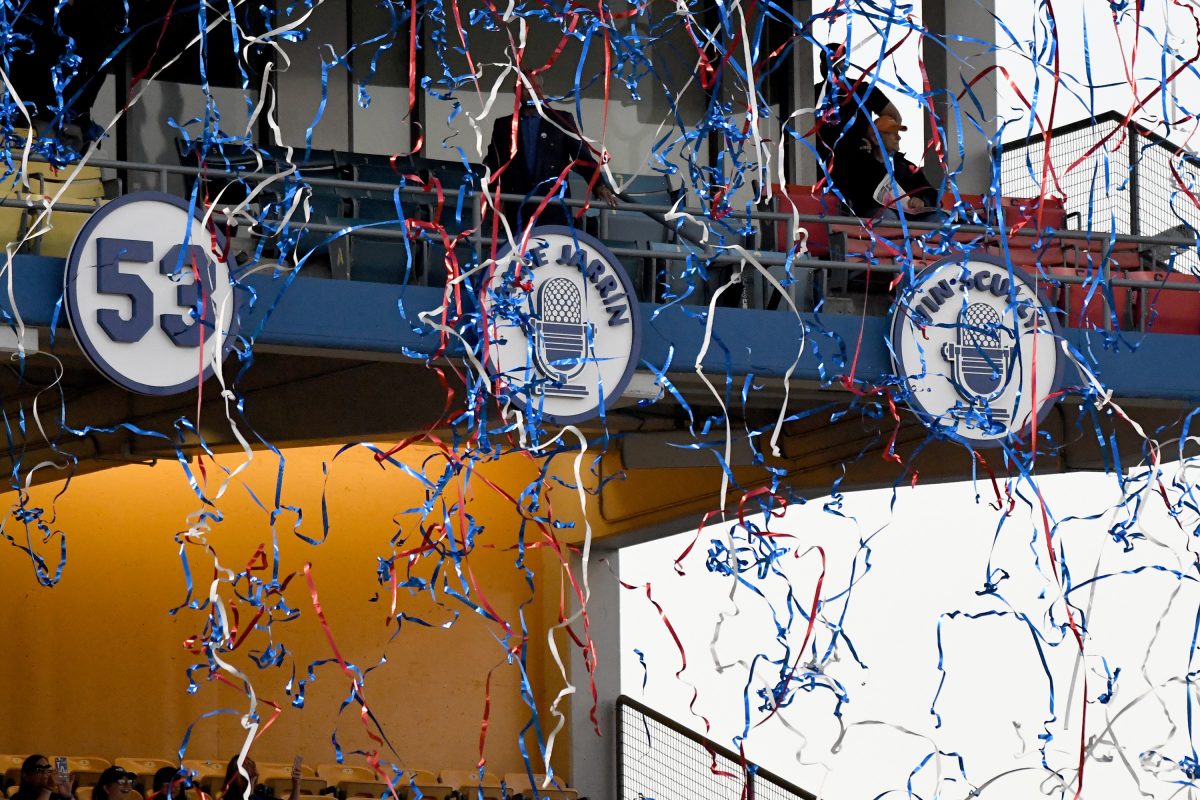 The easiest sports broadcasting question is, “Who has had the longest tenure with one team?” Of course, Vin Scully, 67 years with the Dodgers.

Who’s second? The answer is Jaime Jarrín who didn’t sit far from Vin for 58 years, having joined the Dodgers as their Spanish language voice in 1959. He begins his 61st season next month!

In the first segment of our interview with the Ecuadorian-born Jarrín, he shares his roots, how he wound up in the United States and in the Dodgers broadcast booth. In future interviews, he will talk about everything from his broadcasting philosophy to how Scully mentored him.

What brought you to the U.S.? What was your background in Ecuador?

I come from a family of ranchers and grew up in a little village that didn’t even have a high school. So when I finished grammar school, we moved to Quito, the country’s capital. A cousin, Alfredo Jarrin, was a well-known radio announcer in Quito and he took me to the radio stations where he worked. I simply fell in love with the microphone immediately .

In high school, I took a special six-month course on announcing because Alfredo felt that I had a nice voice. He said, “Jaime, if you would like to become a radio announcer, you have to prepare yourself.” I went to work at a short-wave station called HCJB. owned by Protestant Churches in the United States.

There were eighty announcers there, speaking virtually every language. The exposure I had to a multitude of languages stimulated my interest in coming to the United States. Times were different. Many American people living in Ecuador actually came into the station just to hear programs. Among them was the American counsel in Quito. We became friends.

One day, half jokingly, I asked him if I could get a United States visa. He thought I meant as a tourist. I said no, no! I want to emigrate to the U.S. and eventually become a citizen. He asked if I was sure. I said yes. Newly married too, I told him that I wanted to take my wife with me. He invited me to the embassy and turned around a visa in less than 24 hours.

So I came to this country without knowing anyone and without the promise of a job. All I brought with me were letters from the stations where I worked, substantiating my role as the official announcer of the Congress of Ecuador and the work I had done at Radio Quito.

At the same time, I also wanted to be a commercial pilot and hoped to go to an aeronautical school in Teterboro, New Jersey. I applied and was accepted. So I faced a dilemma. But I think radio won!

I considered going to Chicago. Then I heard that the skies were bleak there and that the weather was bad. I also read about the heavy concentration of Spanish speaking people in Southern California. So I came here and I arrived on June 24, 1955, the same day that Sandy Koufax pitched his first game in the major leagues.

There was only one Spanish language radio station in Los Angeles, KWKW, the first full-time Spanish-speaking radio station in the country. So I applied for a job but there weren’t any openings. With no other options, I took a job in a factory making metal fences while continuing to inquire about a job at KWKW. Finally, they gave me a few hours on air on weekends in December 1955.

I had lots of experience as a newsman, not as a sports announcer. In Ecuador, I also did special events, classical music, and Ecuadorian music. KWKW had no openings in news so my first job was doing a remote from a music store in Alhambra; two hours on Saturdays. When there was finally an opening in news, I became a full-time announcer for KWKW. By 1958, I was already the news and sports director of the station. I was doing boxing from the Olympic Auditorium and I was only 23 years old.

How did you end up broadcasting for the Dodgers?

I first came in contact with baseball In October 1955. I had been here only three or four months. It was the World Series in New York between the Yankees and the Brooklyn Dodgers. I saw so many people sitting around radio receivers or TV sets, listening or watching in restaurants, bars and businesses. I said to myself, My goodness, what’s that? They told me it’s baseball.

I was always very sports-minded so I committed myself to learning the game. Before the Dodgers arrived, I started going to AAA games on weekends; the Hollywood Stars, who played at Gilmore Field in West Los Angeles, and the Los Angeles Angels, who played at the old Wrigley Field in South Central Los Angeles. No one remotely thought that the Dodgers would move a few years later. So by 1958, when the Dodgers did come, I had already seen some baseball.

One day, William Beaton, owner of KWKW, called all of the employees of the station into his office to give us the great news that he had just signed a contract to acquire Dodgers rights in Spanish, adding, “I need two announcers.” Looking at me, he said, “Jaime, I want you to be one of the two announcers.” I told Beaton that I know some baseball but I didn’t think I am ready. He liked me very much and said, “Jaime, I am going to give you one year to prepare yourself for this job.”

So, that first year in 1958, I went to every Dodger game at the Coliseum, I listened to all the games on radio and watched as much as I could on TV. I read every book and every magazine about baseball. True to his word, in 1959, Beaton asked me, “Are you ready?” I said I think so. So I started doing the games. René Cárdenas was the number one announcer and I was number two.

I started out thinking I would do baseball for only five, six or seven years and then move on to something else. Spanish television was about to be launched. In 1963, the first Spanish TV station in the country was in Los Angeles, channel 34, now owned by Univision. So I thought that television would be my next step. Eventually I did work for Telemundo for eight years as sports director but I never enjoyed doing television. I have always been a radio man because you can be yourself. On TV, you’re  a mouthpiece for the director. On radio you can really paint a picture. I still love radio and that’s why I am still kicking around doing it.