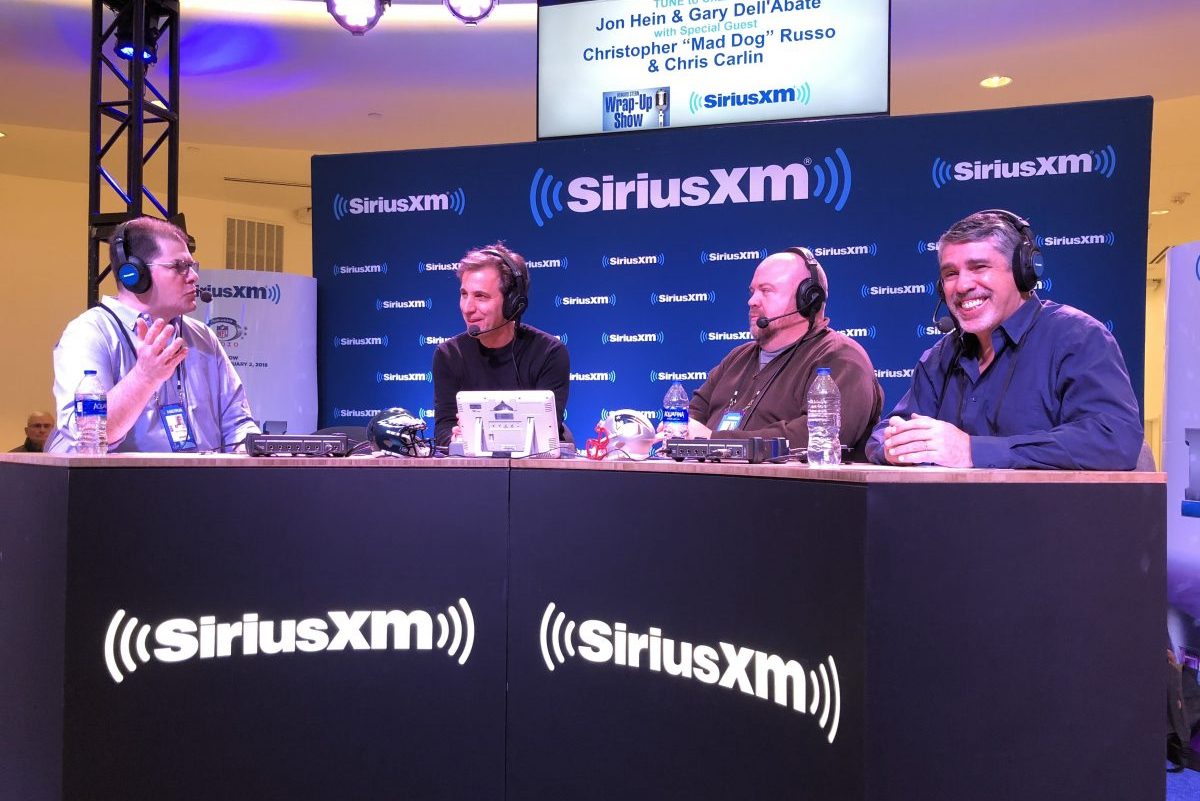 While many aspire to achieve their dream job, Jon Hein is charmed enough to have landed two of them, parlaying working with the King Of All Media, Howard Stern, into talking sports in the No. 1 media market.

An on-air personality weekday mornings on Sirius-XM’s Howard Stern Show for 12 years, Hein has co-hosted weeknights on SportsNet New York’s debate program Loud Mouths the last two years. “In both my jobs, I look around for the person that’s going to tap me on the shoulder and say, ‘OK, you’ve got to get back to work,’” Hein said.

After working in computer training and marketing, Hein followed his passion by creating a once popular TV trivia website, joining the Stern Show, writing a book about fast food, and now co-hosting a Big Apple sports TV show.

“Growing up I loved to watch TV, eat fast food, watch sports, listen to Howard,” said Hein, 50. “And all that stuff I did really as a kid growing up, I was able, somehow, some way, to parlay into an actual paying gig. So yeah, I feel very fortunate.”

Along with well-known, Stern producer and sidekick Gary Dell’Abate, Hein co-hosts the Wrap-Up Show, akin to a Stern Show post-game program. Hein conducts interviews, takes listener calls, and navigates analysis of the Stern Show’s latest, one-of-a-kind shenanigans. When it’s suggested that Hein is the Mike Wallace of the Stern Show’s farting contests and the like, he laughs, joking, “Maybe I should put that on my Twitter bio.”

The Pittsburgh native moved with his parents to Long Island at age nine. A sports nut, as a kid Hein considered a sports broadcasting career, but “I just thought it was an unreachable kind of goal because everybody wants to do it,” he said. Hein spoke from the downtown Manhattan studios of SNY, the regional sports network and TV home of its part-owners, the New York Mets.

In 1997, Hein created the website, jumptheshark.com, which listed the episode when each popular television series started going downhill, or “jumped the shark.” That’s a reference to the 1977 Happy Days episode, when Fonzie leapfrogs a shark on waterskies, the show thus jumping the shark.

Asked the best part of working with Stern, “It’s seeing Howard every morning,” Hein said. “It’s being in that universe, knowing what happens when the show goes to commercial. Helping be part of the creative process. Work for what is the greatest radio show that has ever been produced. To be a small part of that is incredible.”

Occasionally talking sports on the Stern Show led to Hein guesting on shows hosted by Dan Patrick and Rich Eisen, and on MLB Network. “I realized that I sort of had a knack for it,” Hein said. When Loud Mouths lost co-host Adam Schein, its other co-host, Stern fan Chris Carlin, asked Hein to fill in. “We just clicked,” Hein said. Shortly thereafter, Carlin returned to radio, now co-hosting weekday afternoons on New York City’s WFAN. Hein has since co-hosted Loud Mouths with rotating partners.

“Jon’s done a terrific job at SNY, no surprise there,” Carlin said. “His sports knowledge is terrific, but more importantly, he’s got an amazing sense of humor.” Indeed, on Loud Mouths, “The best moments are the ones where it goes a little off kilter, and you’re able to sort of shift gears effectively,” Hein said. “The other thing is this,” Carlin said of Hein. “His versatility. You can put anything in front of him and he’s not intimidated. The dude is just super-talented.”

“I take it seriously, but also you’ve got to be able to laugh at it, make it entertaining,” Hein said of sports hosting. “And Chris is a master at that. Getting to know (New York sports radio personalities) Moose (Marc Malusis), and Sal Licata, and all the other guys here who I had listened to and watched for years, was a really transformative experience for me.”

At SNY, Hein says he just wanted to prove he knows sports. “And gradually, I think I earned the respect of everybody who works here,” he said. “To the point where I feel comfortable now, talking about why the Jets are getting three-and-a-half. Or why the Rangers haven’t been winning. Or whatever the sports topic might be.”

“It’s not Baba-Booey at golf events, but it’s getting there,” Hein marveled. As for hit ‘em’s impact on his growing public persona, “It definitely has made a difference,” he said. “And my family can’t believe it. They get a huge kick out of it.”

Back then, 12-year-old Hein would wear a Pirates cap, and Russo his San Francisco Giants gear. “And we would argue,” Hein said. “He would tell me how great Jack Clark was, and I would tell him how great Johnny Ray was. He was great. We talked sports all the time. He was out of his mind. Had more energy than anybody I’ve ever seen. Loved playing softball, but more importantly loved talking sports.” Now Hein sees Russo at Sirius-XM. “And we still have the same arguments,” Hein said.

Working with Stern, Hein has learned much that he applies to sports hosting. “One, be prepared,” he said. “Do your research, know your audience. And always keep the audience in mind. Always. Howard says he always imagines they’re the commuter out on the LIE, sitting in traffic for two hours. I try to envision when I’m at SNY, somebody who’s just getting off work, or maybe in the gym. You’re trying to make that half-hour informative, entertaining and smart. And most importantly, have fun.

“And last but not least, try to be the best you can be at what you do. I am far from the best when it comes to doing sports on television, but I’d like to think I’m improving every day.”

In the future, “I would love to do sports radio maybe if that opportunity opens up,” Hein said, adding he’d also like trying play-by-play. “I love talking sports, and getting my reps in at SNY. As the programming here continues to expand, I’d love to do more stuff here.”

Naturally, another Hein goal is to avoid having his career jump the shark. “One of the great things about being the Jump The Shark guy is that I’m pretty aware of when it’ll happen,” he said. “If you see a Jon Hein action figure somewhere, or something along those lines, you’ll know that I’ve taken the leap.”