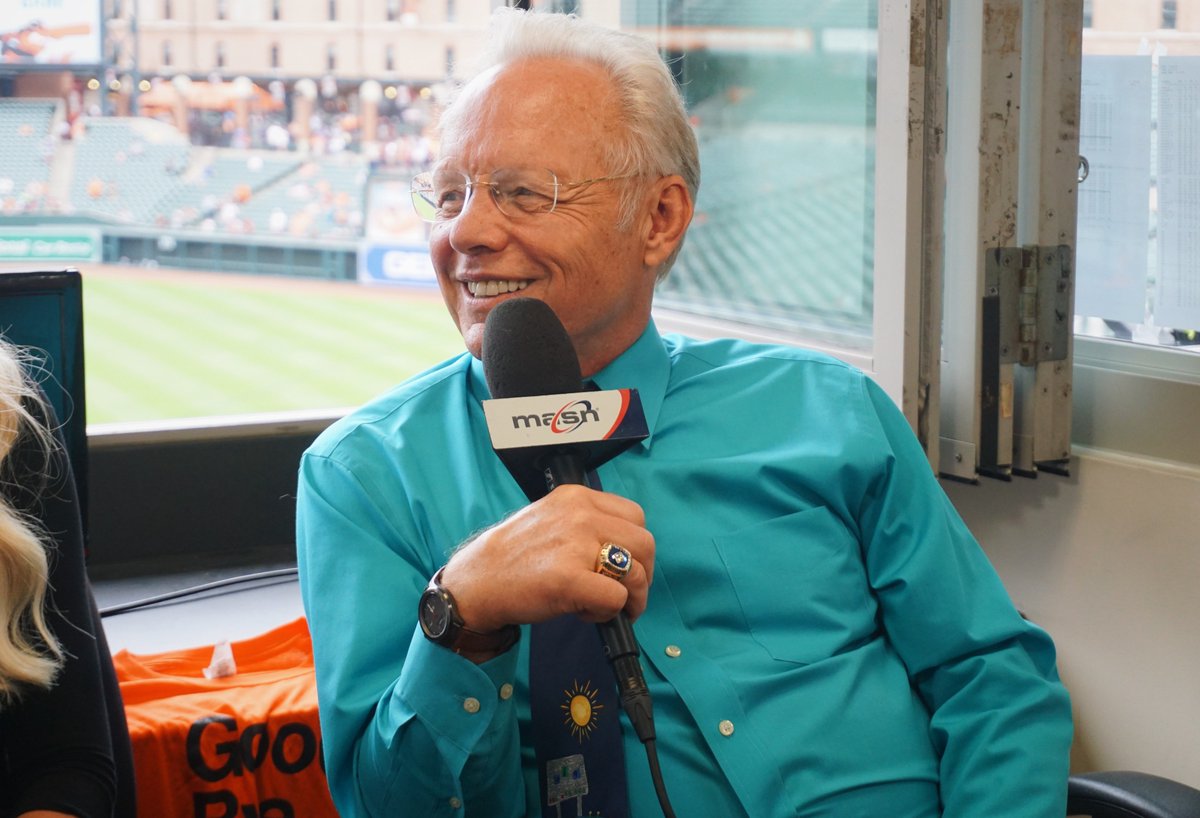 The man is missed. If you’d hear him, you’d likely identify his voice immediately. Even in this day of indistinguishable announcers, he has an unmistakable husky and jovial sound. Once he greets his audience, they’re pumped in a heartbeat, and they’re glued to what he’ll cover.

Gary Thorne has the timbre of Ted Baxter, the command of Don Pardo and the belly-laugh of Verne Lundquist. Cheery and captivating, Gary’s delivery has resonated across the ethers for four decades.

I first heard him in 1985 when he joined the Mets radio broadcasts, serving as a sidekick to the beloved Bob Murphy. For the first seventeen seasons of the Mets existence, Murph was teamed with Lindsey Nelson and Ralph Kiner and the trio alternated between TV and radio. In 1982, Mets’ GM Frank Cashen, split the mediums. Murphy was stripped of TV and assigned radio exclusively. When Bob’s first radio-only partner Steve LaMar was axed after three seasons, there was an opening.

The prominent baseball writer Peter Gammons gave Thorne a plug that opened the door to Al Harazin who was responsible then for the Mets business affairs. At the time, Gary was practicing law in Maine and doing AAA Ball for the Maine Guides. Gary won the Mets audition and there he was in the Big Leagues and in New York!

By 1985, the Mets showed signs of life under the helm of manager Davey Johnson, finishing with 98 wins. The team’s growing success and the effulgent Thorne seemed to energize Murphy who wasn’t happy at first, after being removed from television.

Early on, Thorne continued some of his legal work in Maine, traveling there during an All-Star break to take part in a tax hearing. Murphy and Thorne were an instant success. New York Magazine for that matter named the newcomer Thorne as its Rookie of the Year! Thorne left the Mets radio broadcasts to do the NHL’s Devils on television. But baseball remained in his blood so he  undertook other baseball opportunities including a year on White Sox television, a stint with the Mets on TV,  a backup to Al Michaels on ABC Television, air-work for the short lived Baseball Network which was a partnership between ABC and NBC and he capped his baseball career with the Orioles. (Thorne, right, with old NHL partner, Bill Clement)

Thorne, 73, wasn’t a one trick pony. He did more than baseball, bringing excitement to ESPN’s NHL coverage, gracing the network’s microphones from 1992-2004, a period in which he did 12 Stanley Cup Finals. It was hockey where his bubbly energy was particularly riveting and where he drew a large following nationally.

Gary and I had a chance to interact about his illustrious career:

Your career was embarked. You were a successful attorney in your native state of Maine. What were some of the events you covered at first?

I began broadcasting as a junior in high school for a local station in Bangor, Maine. I started by covering the Sunday shift -7AM to 5PM- and did everything from news to DJ to engineering and live shows in the studio.  That expanded to play-by-play covering local high school sports- basketball and football- for the same station. That led to covering University of Maine sports, primarily basketball and later hockey.

All this time I was in high school and college at Maine. I have been in broadcasting ever since, even while practicing law in Army JAG or back in private practice in Maine.

It’s known that you went to Baseball’s Winter Meetings in 1984 on your own dime, interviewed with Mets executive Al Harazin who hired you. You partnered for four years with Mets’ legendary broadcaster Bob Murphy. The two of you were quite popular together and were certainly not hurt when the Mets won the 1986 World Series. Tell us what it was like working with Murphy, a Hall of Fame broadcaster.

Bob was my mentor in the world of professional sports play-by-play. He believed when you partnered doing broadcasts you were just that, partners, and you had each other’s backs on and off the air.

On the air, his professionalism, breadth of experience and quality of presentation could not have been a better source of learning for me.

We became great friends over the years. We loved working together.  There was always a joy in the booth when we sat down to do a game.  We shared humor, stories and always the focus on the game.  My relationship with Bob was one of the most important in my life.

His warmth and personality shined through in broadcasts, and I tried to do the same. I think that is why listeners liked what we did and enjoyed our work.

You later did work nationally for ABC and then ESPN. Which did you enjoy more, network or local?

That’s like naming your favorite child. They are so different because the audience is so different. What I always enjoyed about the local broadcasts was the chance to really be involved with the team, fans and the organization. The chance to make friendships and share time together was something you could not so easily do on national games, since you were always jumping from team to team.  However, doing national broadcasts brought you into relationships with different crews and organizations and offered games with national interest.

In 1989, you were at Candlestick when the earth quaked and the ballpark rocked. You were among those assigned to work with Al Michaels and Tim McCarver on ABC. Where were you in the stadium at the time and what were your first thoughts when it hit?

I was on the field outside the Giant dugout with Joe Morgan and Willie Mays. Joe and I were to be next on the air interviewing Willie.  Never having experienced an earthquake before I had no idea what the roaring sound and the earth shaking was about.  However, that was for about 5 seconds and then you realized this was an earthquake. It took a while to realize the severity of the quake, but as the pictures started coming in it was clear this was true disaster.

I became a reporter on the field at that point, interviewing MLB Commissioner Fay Vincent, the San Francisco fire chief and players who were trying to get families out of the stands and down to the field.

All those years doing the NHL on ESPN. You can argue that nationally you’re best remembered for your hockey call. Do you miss the game, and now that ESPN has regained the rights, would you accept an ESPN gig if offered? Many on social media made unsolicited demands of ESPN that you return.

I so appreciate the fans support in asking for my return to cover the NHL. To know the memories of those years of coverage rings positive with viewers is what this business is all about for me.

Those years doing the games on ESPN with Bill Clement was a time of sheer delight. I have always said there is nothing in sports like the Stanley Cup playoffs – two and a half months of the most intense games imaginable.

I did consider returning to ESPN as part of the NHL coverage, but no offer resulted from our talks, at least to this date.

Your last position was with the Orioles where you worked TV with Jim Palmer. How did the two of you interact and do you miss not doing day-to day baseball?

I have done a few Mets games this year, so that has kept me in the booth a bit. I miss the games and the interaction with the people I worked with. Doing games off a TV monitor is not easy and the lack of interaction with players and management is a real loss for both the announcers and the fans.

Working with Jim was a joy.  We both share a rather dry sense of humor that I think came through to fans.  His extensive knowledge of the game and Orioles’ history led to wonderful stories. We both tried to let the fans know we were there for them, to add to their enjoyment of the game. We became good friends on and off the air.

This might sound silly. You weren’t the first attorney in a baseball booth. To name some, Mel Allen, Russ Hodges, Howard Cosell and others. What advantage, if any, does a legal background bring to you as an announcer?

The legal background is a great help in organizing material and thoughts, which you must do in preparing for a broadcast.  The law requires focus and so does broadcasting. My experience as an appellate attorney, writing briefs and arguing cases,  was immeasurably helpful in my broadcast work.

I’m happy to be in that list of attorney/announcers.

We have recorded some 35 TheSportsRivals podcasts. The personal reflections of the guests on the particular rivalry covered is immensely entertaining and revealing. The passion of the rivalry does not diminish over time and that comes through in the podcasts.

The best part is hearing guests ask one another questions they have held in abeyance for years. That really puts one deep inside what the rivalry was all about.

Wondering about the Yankees-Red Sox rivalry, hosted by Thorne: