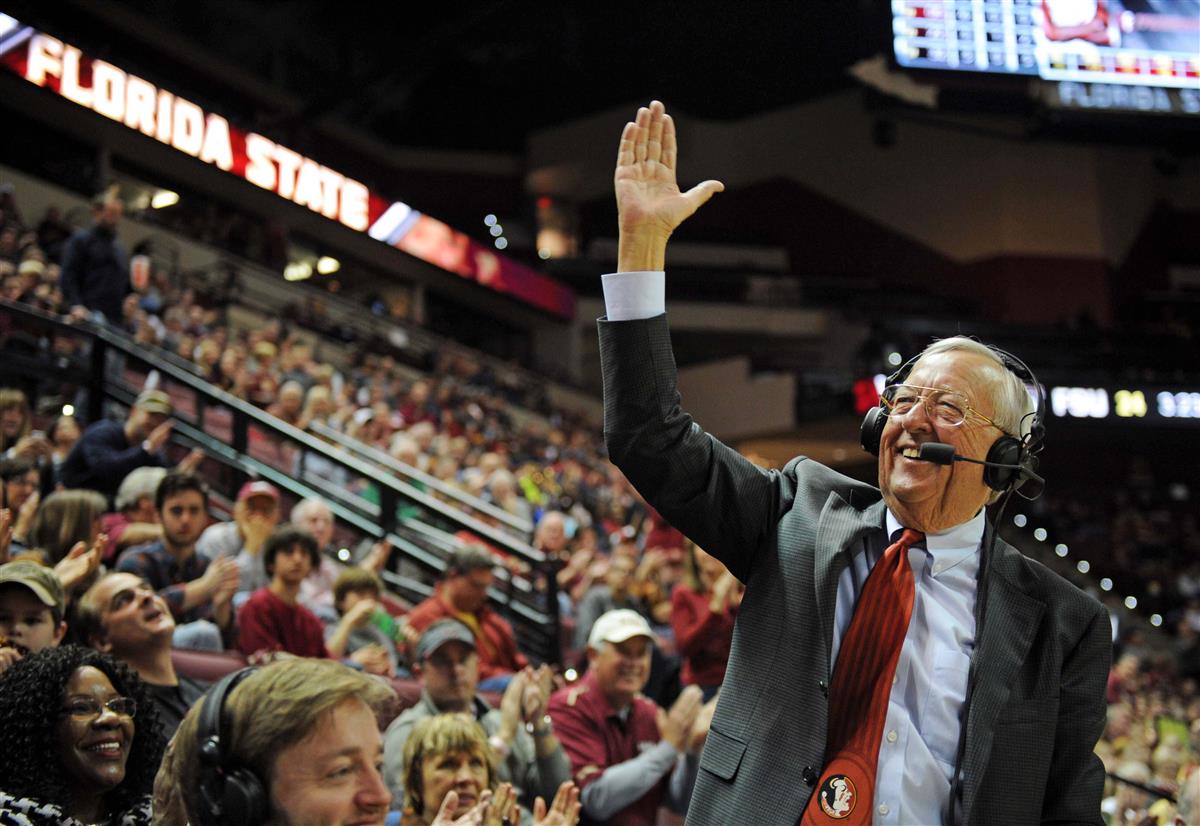 Gene Deckerhoff: Even when his teams are losing, listeners don't know it, until they hear the score. He's the model of positivity

Florida’s busiest play-by-play voice Gene Deckerhoff can’t disguise his unmistakable voice or temper his wonderful enthusiasm. Gene is who he is. He doesn’t sprinkle phrases into his play-by-play that he’s heard elsewhere. His broadcasts are his own, not someone else’s.

In the fall, Gene’s raspy timbre means one thing. It’s football season. No play-by-player in the state has called three major teams as long as he has, Seminoles football for 41 years, basketball for 46 and the Tampa Bay Bucs for 31. You might argue that he’s the most accomplished and most popular play-by-play voice in the history of the Sunshine State.

One reason that Deckerhoff is loved up and down the Florida peninsula is that he’s never contrived, dour or scripted. He sounds on-air just as he does off-air, friendly, sincere and engaged. During weekends in the fall, Gene’s strong pipes bounce off car hoods and storefronts from Pensacola to Miami and many cities and hamlets in between. On Saturdays and Sundays, his sonorous voice fills more than a room. It echoes off Florida’s highways and byways, hundreds of them. And Florida is no longer a sleepy southern state. It’s the third biggest in the union, behind California and Texas. Its population is larger than New York’s.

For Gene, it doesn’t start with the games, it’s getting to them. When both teams are playing at home, the commute between Tallahassee and Tampa is four and a half hours. Those are easy weekends. But getting from Florida State football games late on Saturdays to Bucs games on Sundays can be iffy. When FSU plays Saturday nights, Gene has to keep his fingers crossed that all carefully planned connections go as hoped. He manages to meet the challenge on most occasions but not all.

“One Saturday night the Noles played in Louisvile. I slept quickly, took the first plane to Chicago the next morning and had a car pick me up at the airport. When we got to Grant Park, I knew we’re nearby. But then the driver had the wrong parking permit so we circled against traffic and I missed the first quarter.”

By contract, Deckerhoff’s obligated to do all Florida State football games. When pressed by scheduling conflicts, he tells me that he has to call at least part of a Noles game. Earlier this year, Gene had a date at Clemson on a Saturday afternoon and a Bucs game in London the next day.

So he did the first quarter at Clemson, left the stadium, found his driver among thousands of cars in the parking lot and got to a little airport near the campus. There, the Bucs flew him in a little Cessna Citation to Hartsfield Airport in Atlanta where he caught a 9:45 trans-Atlantic flight to London. He made it!

“That’s not it, I’ve got this app,” Gene recalls. “So I listened to Tom Block who took over the Noles broadcast as we took off. I heard Tom say, ‘There’s Gene’s plane taking off. That’s got to be his.’ It was! At that point, the Clemson kicker missed a field goal attempt. So I texted Tom telling him that it was the exhaust from the little plane that swept across the field and made the kicker miss!”

Deckerhoff is a Floridian through and through. He was raised in Jacksonville and yes, attended the University of Florida, Florida State’s big rival. When he began broadcasting in Tallahassee in 1974, he took a ribbing for it. He would kid, “Yes, I went to Florida but I’m not a Gator!”

It was his mom, a softball player, who taught him the basics of baseball. But he got hit by a sharp line drive and it ended his young baseball career. Mom also taught Gene how to score games when they listened to Indians radio broadcasts coming down from a 50,000 watter, WWWE in Cleveland. The late Herb Score was one of the announcers.

In 8th grade, he took up basketball and eagerly learned about the game catching Cawood Leford’s Kentucky broadcasts booming in from WHAS Radio in Louisville.

Later, while in college, where he studied International Relations, he and his wife Ann had their first child during Gene’s junior year. Flash forward. Gene and Ann have now been married 54 years.

Deckerhoff did some radio as a student at UF. When he began looking for work, he inquired about an opportunity at WRUF, managed by the University of Florida. The station’s best known alum is Red Barber. “Otis Boggs interviewed me. He had done Florida football and basketball for like 40 years. He told me that he couldn’t hire me because I wasn’t a part of the broadcast school.”

After college, Gene worked for Southern Bell and General Foods. But the radio bug stuck and he began moonlighting in Bradenton doing high school basketball. “I listened to Miami Dolphins games and their late play-by-play voice Rick Weaver. He was the biggest influence in my career. I think I listened to every Dolphins broadcast during their undefeated 1972 season. I had never done a lick of football and I picked up a lot listening to Rick. He used the phrase horse-collar before it was a penalty.” Weaver also said players were rappycacked when hit hard.

In 1973, WTRL, the station for which he worked in Bradenton, ran Florida State football broadcasts. Gene remembers: “The Noles at the time brought in a ‘name announcer’ to call their games on their radio network. It was Skip Caray who was doing Atlanta Hawks games then. Well, that ’73 Florida State team went 0-11 and I’m running the board. The Noles are getting drilled one Saturday and Caray is blasting them on-air. We had four phone lines in the control room and they all lit up. Fans were complaining about Skip. They’d say, ‘We know we’re bad, but we don’t need our announcer telling us that.'”

No one matches Deckerhoff’s contagious energy, win or lose. Dial him up on radio stations across the state and his calls are always uplifting, even when his teams are laboring. Instead of ripping coaches or players, criticizing the officials or bellowing sounds of despair, he might play up the dominance of the opponent. But if you’re wondering whether Gene plays it right down the middle, the answer is no. The Bucs and Noles are we and the opponents are they.

This said, don’t guess the score based on Gene’s on-air intonations. Invariably, his frame of mind is positive, whether his teams are ahead or behind. Often, calls by other local announcers are colored by the successes or failures of the teams they’re covering. When their teams are being rocked, their exuberance turns to gloom. Their sense of hopelessness is redolent in their subdued tenor. Not Gene. His motto is, “Win or lose, people want to hear positive things, not negative.”

Through the years, Deckerhoff has received exalted recognition. He’s in the Florida Sports Hall of Fame and he’s gotten other coveted honors like the Chris Schenkel Award from the National Football Foundation and the Lindsey Nelson Award from the Tennessee Touchdown Club. Both are emblematic of college football broadcast excellence.

I asked Gene about pioneer Red Barber who spent his retirement years in Tallahassee.”I had a chance  to interview him once and spent two hours with him. He had two cats, if I remember correctly. It was before his protege Vin Scully received the Frick Award in 1982. At the time an LA TV station asked me to get reaction from Red. It was an honor visiting with him. His message to Vin early was, ‘Be yourself.’ It stuck. I’ll never forget it.

“Fans don’t have to listen to radio today,” Gene says. “They can watch games on their devices. If they put the radio on, let them have a positive experience.”

I asked Deckerhoff what recommendations he would share with budding broadcasters. A couple of his tips are different from what you often hear other successful announcers share.

It’s inevitable that broadcasters make more mistakes as they age. Right? “When I do, fans just say to themselves, ‘Well, that’s just Gene.'” When Gene makes mistakes, they’re minor and are far outweighed by his magnificent rhythm, picture painting, emotional engagement and neighborly warmth.

Gene says that he has one more year after this season on both contracts, Florida State and Bucs. They’ll take him through the 2020-21 seasons.

I  asked Gene if he had to give up one, Florida State or Tampa Bay, which would it be?.

Gene chuckles and utters, “My name is not Solomon. I can’t answer it. I don’t want to answer it for a long time.”

I remember visiting my Grandfather in Tennessee as a young fellow. He would put the UT games on the radio to listen to the legendary John Ward, even when the Vols were on ABC. “It’s not an official UT game unless John Ward is at the mic.” Today, thanks to the internet, since I don’t live in Florida, I can listen to Gene Deckerhoff and the Seminoles the way my Grandfather listened to John Ward, TV sound always down. And I understand what my Grandfather meant all those years ago. There are many fans who feel their long time home… Read more »

Gebe Deckerhoff, one of the best on and off the air. Miss the visits we had for 35 years in the ACC.