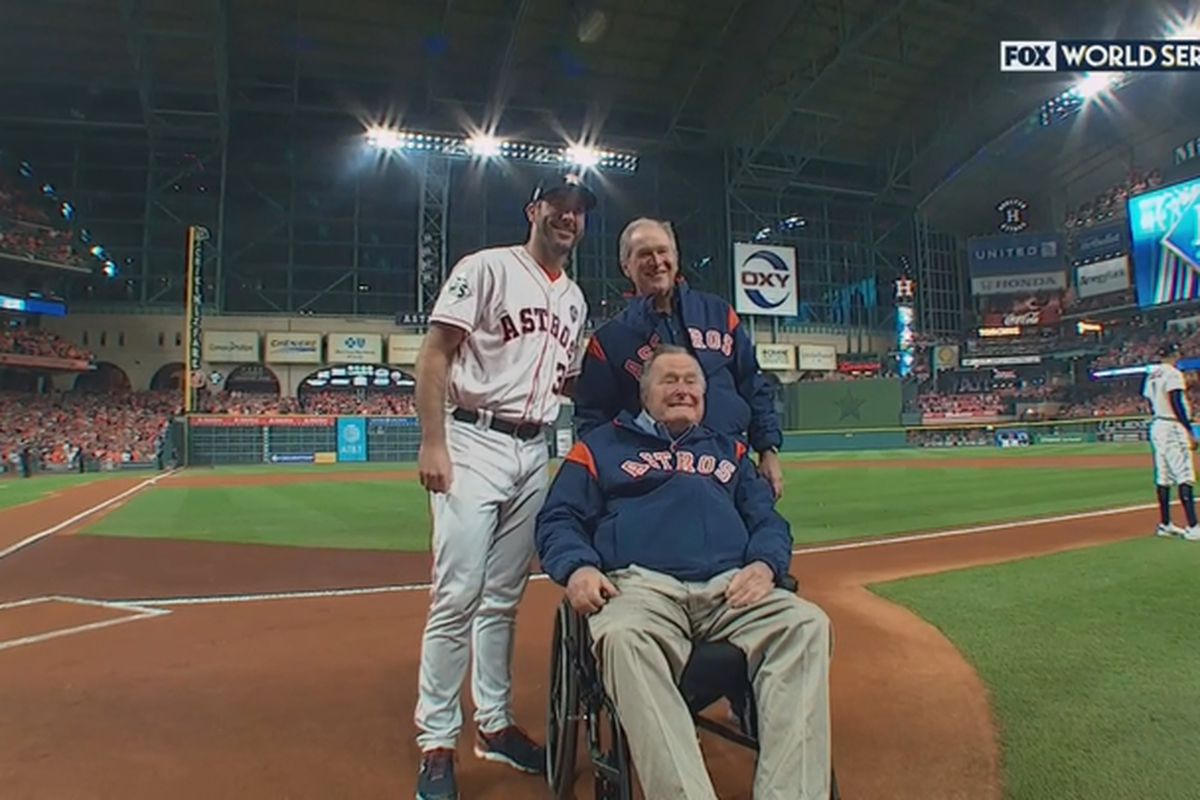 GEORGE H.W. BUSH: AT AGE FIVE, “BASEBALL HAS EVERYTHING”

From 1989 to 1993, then later when each of us had left the White House, I was privileged to write speeches for George Herbert Walker Bush, who lived to be 94, America’s oldest and among most beloved former U.S. Presidents. He was likely the most nonpartisan president since Dwight Eisenhower in a political age that had been nothing if not partisan—sharply, even recklessly.

To most, Bush seemed a welcome time out, liking to fish, hunt, golf and play tennis, and drive his cigarette boat, Fidelity, at the family home in Maine. He installed a horseshoe pit on the South Lawn, played to win, but didn’t demand a mulligan. His favorite sport was baseball, Bush having played, coached, and learned its endless permutations. At age five, he first picked up a bat, swung it, and told himself, “Baseball has everything.” It was a judgment he never revised.

Bush was raised in a time and place that taught loyalty and honesty. Mother Dorothy taught modesty, once referencing a hymn to chasten him for bragging as a child: “Now, George, none of this ‘How Great Thou Art’ business.” For Bush—named “Poppy” after grandfather’s “Pop”—crucial were three years in the Navy that he said shaped him more than any other time.

Bush was 17 when Pearl Harbor was attacked in 1941, turned 18 the day he enlisted, and met Ted Williams in 1942 war training. Their friendship grew as each fought for America here and abroad, Bush almost dying when his plane was shot down and The Kid showing that he wasn’t just the greatest hitter who ever lived. In 1988, then-Vice President Bush trailed badly in the New Hampshire GOP primary, barely a week away. Having lost the Iowa caucus, the Massachusetts-born Veep would likely withdraw if he lost here too.

Unannounced and unknown to Bush, Williams flew his private plane from Florida to join him on the stump. For the next two days arguably the most recognizable person in New England and the future 41st President jointly barnstormed New Hampshire, Poppy joking that he was Ted’s hired help. Crowds went over the moon. Bush’s victory made his nomination, thus 1988 election, possible.  Billy Joel is noted for “A New York State of Mind.” Bush’s baseball state recalled a coming of age.

Inaugurated two months later, Bush told his writers, “I’d rather quote Yogi Berra than Thomas Jefferson.” That July he spoke to a South Lawn crowd which began a European trip to, among other things, christen a chapter in Poland. “Now,” he told it, “I want to consult my handy-size book of statistics and read a couple of lines on both Stan [Musial] and Yaz [Carl Yastrzemski],” each Polish. “Wanna’ know about Yaz? You gotta’ have this book!” He did—The Encyclopedia of Baseball—chirping like Dorian Gray, never grown old.

In 1991, he gave Williams the Presidential Medal of Freedom. Poppy then hailed the 1941 magic daybook of Ted’s .406 average and Joe DiMaggio’s 56-game hit streak, presenting each with the “President’s Award,” never given before or since. After the Rose Garden tribute, Bush, DiMag, and The Kid took Air Force One to a “foreign policy summit” with Canadian leader Brian Mulroney in Toronto, where that night’s All-Star Game had been conveniently scheduled. “The whole plan,” Bush said, “was to get Ted and Joe on the flight and just listen to their stories.”

Growing up, Bush’s beau ideal had been Lou Gehrig, the Pride of the Yankees. “I remember Lou’s continuity,” he said. “Gehrig was steadier and more dependable than Babe [Ruth], steadily achieving excellence”—a telling self-portrait. After playing 2,130 straight games, Gehrig fell in May 1939 to a foe that never made a box score—amyotrophic lateral sclerosis (ALS), now Lou Gehrig’s Disease. That July 4th, Lou gave a famed speech calling himself “the luckiest man on the face of the earth,” dying in 1941. Three-quarters of a century later Bush termed him “still my hero.”

At war’s end The Greatest Generation returned home. Poppy wed Barbara Pierce, enrolled at Yale, and captained its team. A photo shows Babe Ruth, dying of throat cancer in 1948, giving a uniformed Bush the manuscript of his memoir at Yale Field for the school library. Bush moved to Texas, his four sons playing ball. “I coached it,” he said. “There were tens of thousands of kids in Little League, and I think that Barbara car-pooled them all.” Eldest son George W. later ran the Texas Rangers before trying politics.

In 1989, Dad told journalists. “I’d rather watch baseball more than anything else.” “What about your good field–no hit [persona at first base]’?” a writer asked. “Now wait a minute!” Bush protested. “Is this an assault by the press?” The press began laughing, Poppy’s impromptu wit easily his most unreported trait as President.

In 2017, he helped toss the ceremonial first pitch before epochal Game Five of the World Series in Houston: his home-town Astros 13, Dodgers 12, ultimately taking their first big-league title. For George Bush, the world had changed almost beyond recognition. What had not was his love of baseball—to him, still having everything.