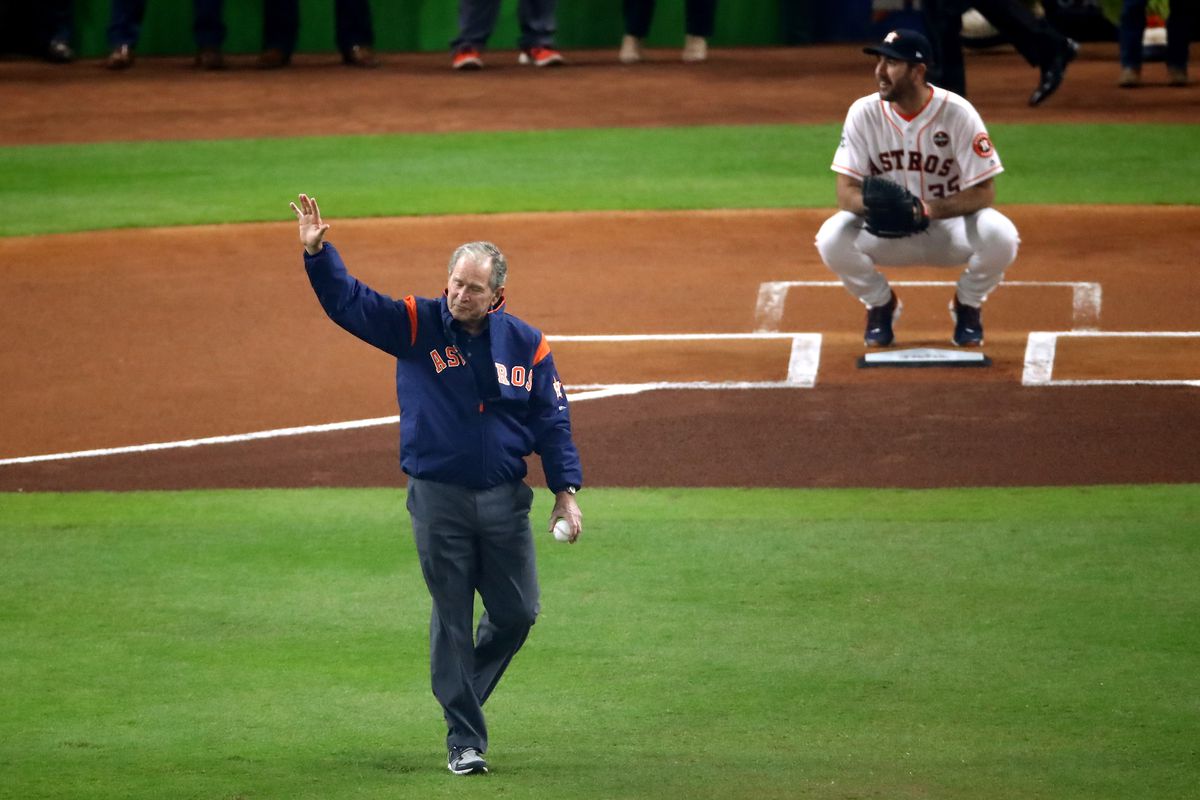 GEORGE W. BUSH: THE FIRST PITCH HEARD ROUND THE WORLD

In 2000 George W. Bush was elected president, perhaps thinking it a consolation prize. The Texas Rangers head had once hoped to become baseball commissioner, having called Willie Mays his favorite player and deemed ESPN’s Baseball Tonight his favorite TV show. He brought to the White House what even many cool to W. politically termed his “Everyman kind of vibe.” He knew the pastime’s politics and history, its inner workings and strategy.

Bush grew up in Texas equating baseball cards with liturgy. More than a half-century later he still linked the game to a post-war glow, “We’d play each other, go to barbecues, help each other out,” W. said. In 1989, memory led him to form a group to buy 54 percent of the Rangers—and in 1994 as co-owner to build The Ballpark at Arlington. He was “protecting his investment,” said political guru Karl Rove—also W.’s tie to the ’50s culture of his youth.

Like politics, baseball bred nicknames. To some, W.’s became “Shrub,” a snide derivative of “Bush.” Still, George believed it could aid the “kinder, gentler” tone of his father’s 1989 presidential inaugural address. That year, W. committed what tongue-in-cheek he called his “worst mistake” ever—trading slugger Sammy Sosa to the White Sox. Bush was most attractive when he shelved jock sarcasm to recall such history—also to forge a new face of an historic franchise, the former Washington Senators.

By 1994 W. had reinforced his resume—buoy the Rangers’ health, then build a Texas-worthy park. (The Ballpark closed this week, sans roof to foreclose humidity.) “Baseball,” wrote the Washington Post’s Dana Milbank, let W. “continue a family tradition” and shed Dad’s shadow. At the time, he considered running for commissioner till acting occupant Bud Selig decided he liked the job. Instead, twice elected Texas governor, Bush faced Al Gore for president in 2000, neither getting a majority of the electoral college. For 36 days, a recount continued till the U.S. Supreme Court’s decision in Bush v. Gore.

The night of the Supreme Court edict, Gore conceded in a gallant speech. Later Bush recalled his presidency’s start—in particular, his private fantasy camp, where W.’s huge-size baseball interest stoked the creation at the White House of a junior-size baseball field. Bush’s

“Field of Dreams Day” invited largely 5-to-8-year-olds from around the country. CNN-TV showed children in caps and pants and jerseys, trading bats and gloves and playing catch, and a baseball diamond in and outside on the South Lawn with T-ball games.

On September 11, 2001, terrorists seized and crashed four planes into the Pentagon, rural Pennsylvania, and Manhattan’s Twin Towers, W. becoming a wartime president. On October 30, he visited Yankee Stadium for Game Three of the World Series. The Yankees’ Derek Jeter asked if Bush wanted to loosen up before tossing the first pitch. W. said whatever he thought was fine.

Minutes passed. The crowd started chanting “USA”—to Bush, “a very emotional, pulsating experience.” The 9/11 attack of the prior month still ran rawer in New York than anywhere else. Memory freeze-framed the three-tiered colossus; security; and tattered 9/11 flag, carried from the Twin Towers—above all the presidency and baseball fused tautly, tightly. The Republican Bush was to throw out the pregame ball in this overwhelmingly Democratic city. How would he be greeted? How would he do?

The first question answered itself. Bush met a roaring ovation as he left the Yankees dugout, blue and red states vanishing. W. approached the mound and set to throw from the rubber, unlike most first-ball hurlers. Add the fury in every seat—the emotion overwhelmed. Bush wound up and threw a strike to the Yankees catcher, as if 43 had placed the ball lovingly in the mitt. The crowd exploded, its cry for simple justice piercing the cool Bronx air.

Slowly, Bush left the field, Gary Cooper in High Noon, a hero more than he had ever been or ever would be again for firing a perfect strike— America’s signpost to the world.