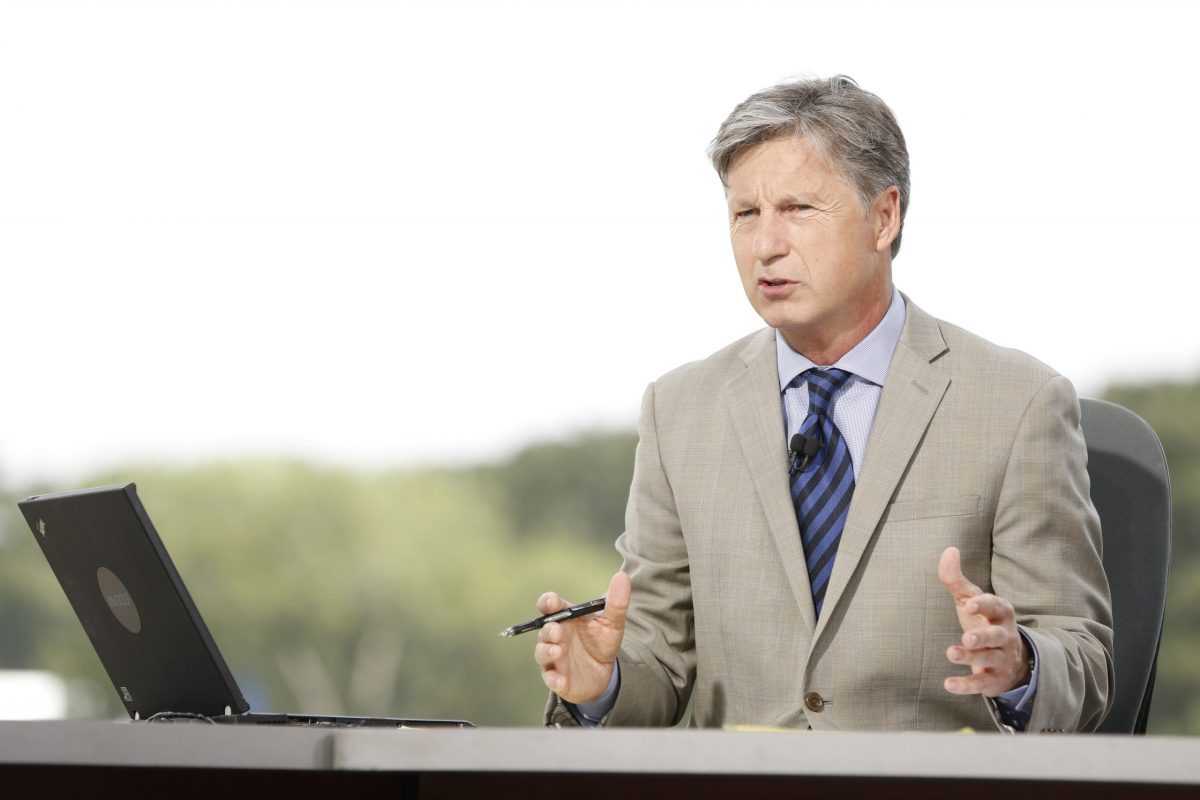 Confident. Poised. Impetuous. Decisive. Prepared. Straight forward. Outspoken. Complex. Opinionated. Brandel Chamblee of The Golf Channel and NBC has many layers. All these words and a few other choice words have been used to describe him.

What makes him feel? What makes him think?  Why did his life take one direction when there was comfort already well within his grasp as a professional golfer? On the PGA Tour, Brandel carved out several strong top 100 money making seasons.

What ultimately drives this person who’s uprooted the status quo as no one ever has in the stately game of golf? Chamblee, recognized by this author as the most important analyst in the game today, has taken on golf’s giants. He’s also confronted the game’s most contentious issues since joining The Golf Channel full time in 2004.

Some would call Chamblee callous for calling out the likes of Tiger Woods, Phil Mickelson, Brooks Koepka, Rory McElroy and countless others through the years. But refreshingly, he backs his takes with hard facts, not hyperbole.

Jay Delsing, a former tour player and host of one of the sport’s most listened to podcasts, “Golf With Jay Delsing“, told me this about Chamblee, “His words are 95% well measured and he is able to take the personal out of the equation 100% of the time.  No matter who the player or what the circumstance, he will give his opinion as he sees it.  That leads to hurt feelings. Tour players do not like to feel scrutinized.”

Recently, I conducted an extensive interview with Chamblee and learned more about his life and his start in the game. My hope was to piece together who he is and why he has become appointment viewing.

This is part one of our conversation  It covers his intriguing background.

In part two (the week of March 9th leading up to the Players Championship), we talked about the game today and the recent hullabaloo over the Patrick Reed rules violation which Brandel called, “an egregious offense.” Chamblee was sufficiently outspoken over the matter that Reed’s attorney sent him a cease and desist letter.

The early days. You were born in St. Louis but really grew up in Irving, Texas, a suburb of Dallas. What were those days like for young Brandel?

My life really revolved around football and horses like many Texans. Growing up in Irving in the 70s, I wanted to be a professional football player. With no disrespect to the Patriots, the 70s was the greatest decade of football.

I was a running back getting abused. So I figured that as older kids were getting huge, the prospect of me becoming a pro football player was slim. After that, I wanted to be in the rodeo. I was on horses all day with my older brother. When I was 11 and Bill was 13 we attempted to ride horses a hundred miles to Lake Texoma. We did a lot of dumb things on horseback.

Dad never really played golf but I had a high school friend who was a nationally ranked junior golfer.  He asked me to play one day. I’m pretty sure he shot 69 and I shot 169!  But I came home and told dad that I really liked it and I wanted to play more golf.

He said great, but you can’t do both. So we had to sell the horses. A month after that, I knew that playing golf for a living was what I wanted to do with my life. In my region there were scores of players on tour like Mark Brooks, Scott Verplank and Andrew Magee. By 1977, I was getting good enough to look at colleges. I saw the great Early Campbell score a touchdown that season, then drop the ball and head to the sidelines. It made me think that UT was all class and tradition. No other football player was more humble.

Did you have a swing coach growing up?

No, I didn’t. Pretty much it was all TV and I tried to emulate a guy like Jerry Pate who had just won a US Open. I’d try to imitate his backswing. Never used the orange ball like Pate though!

Majoring in communications at UT, did you ever imagine that eventually you’d be an analyst?

No, not at all. I always enjoyed reading, writing and oratory. When I was in high school my older brother was on the debate team and he was quite good. Today he owns his own law firm. My dad was an excellent debater and a fabulous speaker. I always enjoyed listening to someone who could command a room and articulate difficult thoughts.

Did your family engage in intensive dinner debates?

Every day! Dad would invite the whole neighborhood to the house. Doctors, Priests, lawyers, engineers, salespeople. He invited them to argue. Dad loved to debate. It was never about winning the argument, it was how good an argument you made. No one could ever out-think my father.

Were there certain announcers in media, not necessarily golf, who  influenced your style?

For sure. I grew up listening to Pat Summerall who was ubiquitous and Jim McKay. I read a ton, devouring as many golf books as I could find. Later on, it was Bob Costas. I appreciated how on the fly they were able to come up with relevant and interesting things to say. Most sports fans can’t exactly pinpoint why they like certain broadcasters but they know it when they hear it. I remember watching the Olympics when Jim McKay said, “They’re all gone.” When I was in school I felt comfortable giving speeches or writing.

You had a fine career on tour. One win but you were “in the money” more than not. You made the tough decision to step away in your early 40s. Was it more a family decision?

It was. Life happens. My family suffered a terrible tragedy when our infant son Braden passed. I found myself on the road with no motivation to practice. There was a hollowness inside of me. The road, golf in general can be a selfish endeavor, an unforgiving place to be when you’re travelling and you’re missing your family back home.

I had been writing in various golf magazines since I was a tour rookie. I’d been receiving offers to do TV beginning in the late 90s. Initially I did some things with ABC. I’d agree with your assessment that I had a good career, (a 15 year tour career), some would call it an average or a little above average career. Golf was great to me but I just knew I wanted to do something different.

So here you are. New endeavor. The Golf Channel. Arnold Palmer had a huge impact on the network’s launch and there you were right out of the gates. You’re an influencer in the sport.  What does it feel like?

Early on I never really felt I was that good at it. I had to identify and build my style. I had to get used to people telling me I suck or you’re great. I had to figure out how to compile it all so I could relax. I remember Mike Tirico telling me that it takes about ten years to get comfortable, to find your own voice.

If you’re not good in this business, you don’t get invited back. It’s an insecure space. That said, pretty early on I came up with my own scorecard which I used to determine whether I was successful on a show or not.  For me, it boiled down to thorough preparation. What can I say that that’s really important that no one else has said, something compelling and memorable? What are the points and counterpoints? Lastly and most importantly was to listen and have fun. I don’t care if it’s an off day or the Masters, I’m grinding.

Sounds like your back at the house with Dad?

Absolutely. How good, how watertight can I make this argument. I want a checkmate argument!

NBC Sports Group is set to kick off its stretch of seven consecutive weeks featuring PGA TOUR broadcast coverage, beginning with the network’s Emmy-nominated live tournament coverage from the WGC-Mexico Championship (Thursday-Sunday, Feb. 20-23) on GOLF Channel and NBC. The span will provide more than 310 hours of live tournament coverage across linear television and PGA TOUR LIVE on NBC Sports Gold.