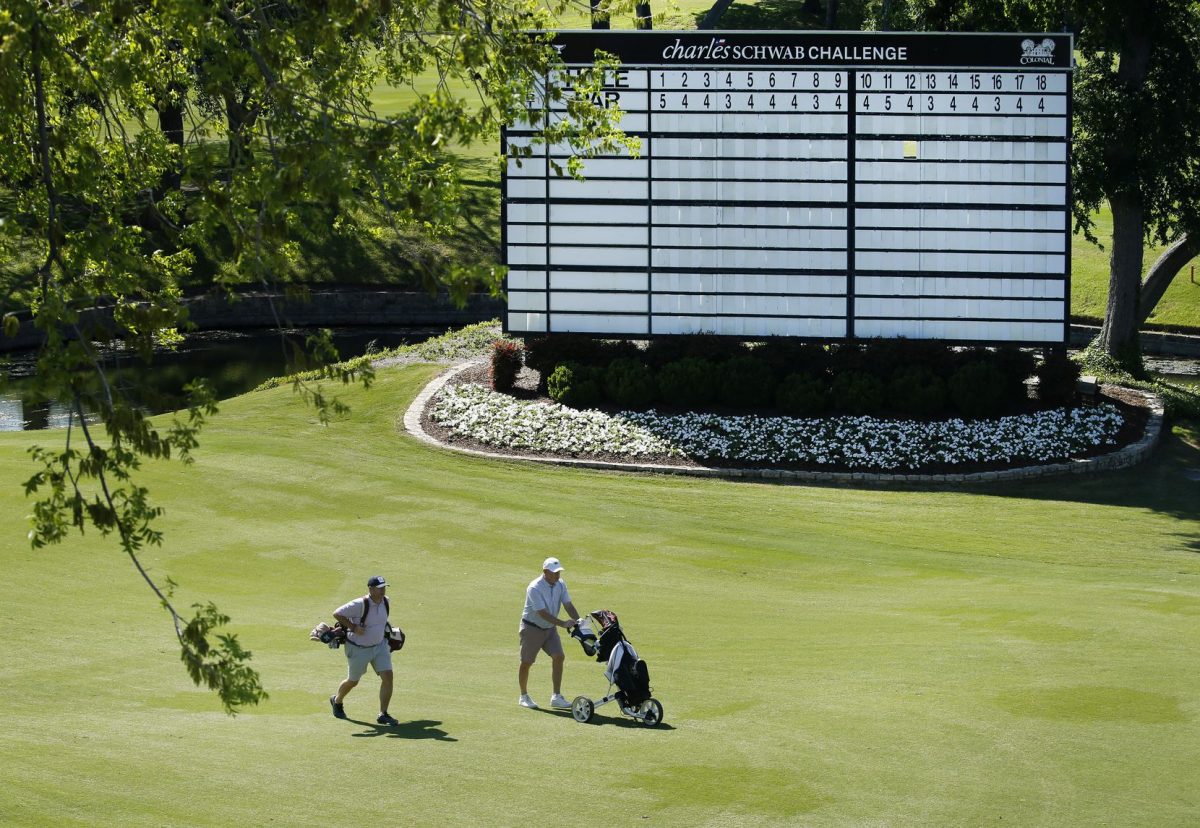 If you’re a fan of professional golf, you’ll no doubt remember the events of March 12th very vividly.

That Thursday represented the last day that official competition swings were counted on the PGA Tour at The Players Championship in Ponte Vedra Beach, Florida. By the time nightfall descended on the historic layout, decisions about how the tournament would play out against COVID-19’s sweeping advance were changing by the hour.

First, the PGA Tour issued a statement that the tournament would be completed without fans Then, near midnight, the Tour reversed course, canceling the tournament altogether.  That decision set into motion the move to cancel or postpone many events until the fall, including The Masters, which will be held in November.

While it was always thought that the PGA Tour could be the most logical sport outside of stock car racing to return to some sense of semi-normalcy, given the required social distancing, the logistics behind such a return heavily focused on players, essential staff and fan safety.

Ultimately, the tour put together an ambitious and aggressive schedule whereby its first five tournaments will be played without spectators. The action gets underway this week at the Charles Schwab Challenge at historic Colonial Country Club in Ft. Worth Texas.

As the schedule gets underway, networks face a massive undertaking. Produce top-grade telecasts while adhering to today’s distancing guidelines. The brunt of the heavy lifting over the coming weeks will be the responsibility of CBS and The Golf Channel.

Let there be no doubt that viewers will see a change in the delivery. Newer elements of the broadcast are sure to intrigue viewers too.

I had the chance to catch up through two separate conference calls with Golf Channel’s Brandel Chamblee as well as a trio of CBS Sports’ big players; Chairman, Sean McManus, anchor Jim Nantz and lead golf analyst, Nick Faldo.

These are their thoughts on a variety of topics after an almost ninety day layoff:

“It is the most complicated production plan I’ve ever been involved in. We’ve been working on it for two months. More complex than Super Bowls and NCAA Tournaments. CBS will have half the staff and most working in different locations. There will be fewer production trucks spread across Colonial to promote social distancing.”

McManus: “This is done with health and safety of our people at the forefront of our decisions and Viacom, (CBS Parent Company) is squarely behind us.  We’ll have production teams working remotely in New York, Los Angeles, Stamford and even New Zealand if you can believe it.  We have contingencies on top of contingencies where we’ll have backup crews ready to go.  Furthermore, we’ll change out to an entirely new production team in two weeks which gives us the flexibility to react if necessary to any health contingencies. Clearly, this tournament is one of the most important events in my broadcast career given the current landscape.”

McManus on how the on-air talent will be shifted:

“Jim Nantz will be the only person in a tower anchoring. Dottie Pepper and Mark Immelman will work on the course. We’ll have our analyst, Nick Faldo, Ian Baker-Finch and Frank Nobilo working out of Golf Channel’s Orlando studios. Golf Channel has been such a terrific partner, one of the best we’ve worked with in many years.”

Nantz on the significance of the Tour returning to the airwaves and the impact it has:

“I recently turned 61. Given the events we’re enduring as a nation, I believe this is the most important moment in my lifetime. We have to get this right and I hope to express that at the top. The enormity and effort that has been put into this production is impressive. It’s one of the great challenges I’ve seen in my 35 years of broadcasting.

“I’m working on a an opening with Lance, (Lance Barrow, Coordinating Producer of CBS Golf) whereby we’ll address the issues of the day but in the end we’re there to broadcast a golf tournament to a sports-starved nation. It’ll be different for me where essentially I’ll go from hotel to rental car to booth and repeat it as the tournament unfolds. I won’t have access to the clubhouse and I won’t be walking to a broadcast compound.”

Nantz on the broadcast challenges:

“With a  remote crew, it’s really imperative that we’re not talking on top of each other.  We’ll get some reps and rehearsal this week, as well. Nick and I have done this plenty where many times at The Masters, I’ll be in Butler Cabin calling late action and he’ll still be in the 18th tower.  This happened most recently in 2019 when Tiger won in his ‘Return to Glory.'”

Nantz on the introduction of the unofficially named “Confession Cam”

“We needed this and we needed the cooperation of the tour and players, especially without having the ebb and flow of fans on site. Essentially, we’ll be able to present golfers during the tournament to the viewing public in a way they’ve never seen professional golfers presented during the heat of a tournament.  They’ll go into a tented area, have a question posed to them on a card and answer into a boom mic (to avoid distancing). No interaction with an announcer, just essentially an unfiltered way of understanding where the golfer may be at a particular point in a round.  I think you’ll see this become a regular part of our broadcast and filter potentially into other events we cover as well.”

Faldo on the challenges of working remotely as an analyst

“We’ll really have to have great communication between all of us, particularly with regard to the playing conditions the players are facing. I’ll really have to be in tune with Dottie and Mark throughout to understand the impact that weather, (wind) may be having.”

Golf Channel’s Chamblee on the role golf can play given the current environment around COVID-19 and the social unrest of recent weeks:

“Perhaps sport will provide some respite to the uncertainty and unrest and perhaps that’s too much to hope for. But nonetheless, when you look at the interest drawn to The Match with Tiger and Phil and Manning and Brady, it’s pretty clear that people are hungry for the lighter entertainment that sports provides.

“Just by way of coincidence, I’ll say that golf in general, and Texas in particular, have offered the sporting world a venue following catastrophic worldwide events. World War II ended September 2, 1945. The very next week there was the Dallas Open at Dallas Country Club, won by Sam Snead.

“So you know, I expect the ratings to be colossally high just like they were for The Match with Woods, Mickelson, Brady & Manning.”

Chamblee on the field entered for The Charles Schwab Challenge:

“Obviously it’s a great field. Top five players in the world, 16 of the top-20. It’s the best field ever assembled at Colonial and that’s saying something because Colonial used to be on a prestige level just below the major championships. I’d say it was similar to how we view THE PLAYERS Championship now.”

Chamblee on the participants not playing in front of fans:

“It will probably feel a little odd to some of the players. You know, there’s going to be some more lost golf balls. Again, players that are ordinarily stars, that are ordinarily able to hit balls all over the place and they bounce off the crowd and back into the fairway or they are easily found by the crowd in the rough, I mean, yeah, it’s probably going to slow things down a little bit in that regard, and it’s going to be a little weird.  But I think it’s certainly the better solution, as opposed to not playing.

“Golf is a venue, a sport where it looks like it will safely adhere to the proper social distancing measures and get this thing underway, sort of open up the sporting world to some entertainment. So it’s the right thing to do, but it will be a little bit awkward.”

Chamblee on how players will pace their schedule given the ambitious and aggressive scheduling with majors on the horizon:

“Beyond that, I think by now the players would have had plenty of time to sort of plan out the rest of the year, but obviously they need to reach a pitch at the right time. I mean, there’s a chance to run-off major championships. There’s a chance to win a tremendous amount of money in the FedEx Cup. We are going to be treated to some extraordinary fields, heavily congested, and a tighter grouping of their events, so to speak. I just don’t see how they are going to take that many weeks off. I mean, they have already had 13. I don’t think we are going to see stars taking two, three weeks off, which is more typical at sporadic times during the year. It’s going to feel like the FedExCup or major championships every single week.”

Word on the street is that ad business for the telecasts is pretty brisk.