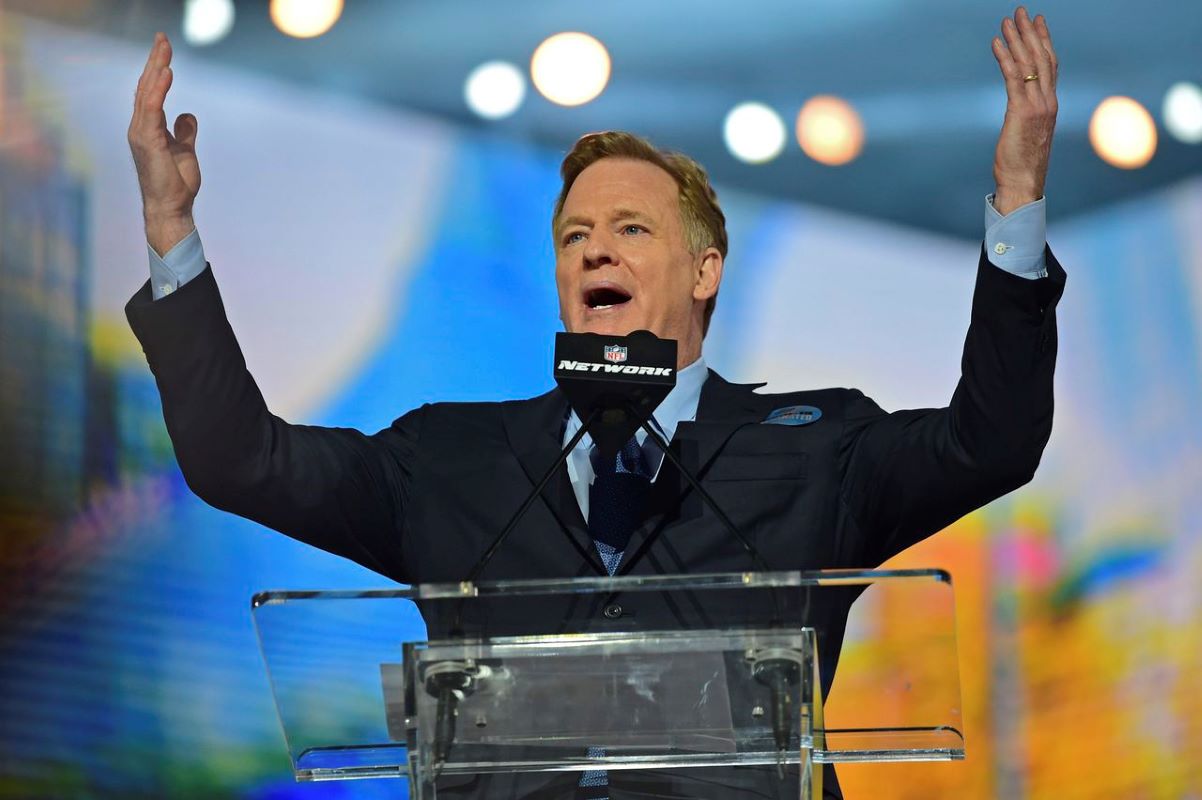 Talk abounds. Can Al Michaels bring his pipes and his 36 years in primetime to ESPN. Would the Mannings follow? A trio like it would capture the headlines. No doubt! Does ESPN want to pay the dough? Unsure. Steve Levy and his cohorts, Brian Griese and Louis Riddick are gaining some acceptance. Change is always fodder for harmless speculation. Do the Bristolites want to blow it up again?

Here’s what the Mannings and company shared on last night’s side-by-sider.

The Class of ‘04 Club: In what is looking to be Steelers’ quarterback Ben Roethlisberger’s final game at Heinz Field, Eli Manning tells viewers that players generally cheer for the players from their draft class and that he is very proud of the career that Roethlisberger has had. Manning was drafted first overall while Roethlisberger was selected 11th.

In Memoriam: The Manningcast took time during the first quarter to honor the important figures the football world has lost in the last few weeks. Both Peyton and Eli discussed the impact John Madden had on their careers, and Peyton honors former teammate Demaryius Thomas, while Eli remembers former player and coach Dan Reeves.

A True Steeler: Hall of Fame Steelers head coach Bill Cowher recalled that Ben Roethlisberger was what a Steeler should be, a hard worker, and acting with integrity. Cowher said that as a four year college player, Roethlisberger developed leadership qualities that other quarterbacks in his draft class like Philip Rivers and Eli Manning shared.

Cowher’s Cleveland Background: Despite being the Steelers’ head coach for 15 years, Cowher played and started his coaching career with the Cleveland Browns. The Mannings bantered with Cowher, asking if he had tried to wipe those pictures off the Internet.

Showing up the Ref: Peyton Manning after mentioning Cowher’s notoriety for sideline tantrums as a coach, he shares his favorite one where Cowher was upset after ‘a 12-men on-the-field penalty’ where the frustrated coach shoved the play sheet in the referee’s shirt pocket, trying to show that there was no penalty.  Cowher laughed and said he was not proud of that moment because of the example it set for his daughter.

Salt in the Wound: Eli remembers the time when Cowher and Peyton faced off in the playoffs in 2005, whereby the miracle Steelers were able to escape with a win, despite a fumble by Steelers’ running back Jerome Bettis in the fourth quarter. Cowher in great detail told the entire story of the game, marveling over how the game ended, much to Peyton’s dismay.

Advantage by Neck: After analyzing the benefits of starting in the shotgun when a quarterback is playing with a new center, Cowher asks what he would do if they wanted to run a quarterback sneak play.  Peyton answers humorously saying that he would just stick out his long neck which got Eli laughing.

Cowher and Reeves: Bill Cowher remembers the first time he met Dan Reeves through other legendary coaches Marty Schottenheimer and Don Shula. The four loved to play golf together, and Reeves predicted Cowher’s success, saying that if he kept his success, he would pass Don Shula in coaching wins.

Peyton’s Hatred for Batted Balls: To echo the Browns’ frustration with the number of passes batted down by the Steelers’ defense, Peyton stated that batted down passes are not impressive since they are done by defensive lineman who did not rush the passer properly. He expressed adamant frustration where Eli couldn’t help but watch in shock.

Goodell on John Madden: Roger Goodell details the opportunity he had for several training camps to tour the country with Madden on his bus, admiring his ability to talk about football all day with anybody.  He also recalled a dinner with Chili’s where Madden could not get over the fact that Chili’s ran out of chili.

The Immaculate Reception: Peyton brought up how John Madden’s favorite memories likely did not take place in Pittsburgh as his Raiders were victims of the Immaculate Reception against the Terry Bradshaw led Steelers. Goodell added that this one play came up all the time when he spent time on the Madden Cruiser, never getting over the luck of that play.

The Goodell Dress Code: Peyton Manning and Roger Goodell poke fun at the attire each other wore during their days playing backyard football, where the Goodell family had to dress in their church clothes.  The pictures shown of Goodell demonstrated a more human side of the commissioner, along with his constant laughing on the broadcast.

Playing to Win: Considering the inaugural season with an 18-week regular season, Eli Manning reminisced on a Week 17 matchup with the undefeated New England Patriots in 2007 before the playoffs.  Manning remembered how both teams had already clinched a spot in the playoffs, yet Giants coach Tom Coughlin still played his starters since they will play to win. After a valiant effort, Coughlin shared a message he received from John Madden commending the Giants for their mindset, even in an inconsequential regular season game.

Goodell Not a Fan of Snoop?: Peyton asks Commissioner Goodell ahead of Snoop Dogg’s appearance on the Manningcast what his favorite Snoop Dogg song is. The exec avoids the question by saying he wouldn’t be able to deliver any songs without expletives, alluding to when Marshawn Lynch cursed as a guest.  Eli joked that Lynch drank some “Gin and Juice” before going on air, causing a laugh from Goodell.

Manning in the Makeup Chair: Exiting commercial break with Goodell still on camera, Peyton got some added makeup done before going back live. He was then made fun of by Goodell who questioned why he’s the only one wearing makeup, where Eli responded by saying that he’s pretty and doesn’t need it.

Eli’s Fantasy Nightmare: Eli Manning details how he is in the championship game for his fantasy football league, but he needs Steelers’ running back Najee Harris to score 80 points, hoping for a big second half.

Happy Birthday Eli: In honor of Eli’s birthday, Peyton shows the audience embarrassing clips of Eli on his birthday from his childhood, where he can be shown dancing in front of a camera and deeply concentrating on what to wish for as he stares at a birthday cake.

The Hunt for Chubb: Entering the second half, Browns’ running back Nick Chubb only had four carries, much to the surprise of the Manning brothers. Peyton advises the Browns to use their pro bowl offensive guards to run inside this half, hoping that the run game gives them offensive success.

Coach Snoop: As a youth football coach, Snoop Dogg encourages his players to take some plays that the kids like from the games they watch, and he will put them in the playbook.  He does this so the kids have fun, and so the kids, along with Snoop learn more about the game.

Snoop on the Sticks: After mentioning John Madden’s impact through the Madden video game, Peyton proceeded to show a clip of Snoop Dogg being frustrated while playing the video game with the “Curb Your Enthusiasm” music playing in the background.  Eli wondered where the off-button Snoop pressed on his TV was during some of his bad moments on the field.

Coach Roethlisberger: On a third down and long after a short throw to the flat failing to reach the first down marker, Snoop Dogg theorizes that Steelers’ quarterback Ben Roethlisberger ignores what he hears in the headset and calls his own plays, joking that it is not a smart football play to go for a two-yard pass in this situation.

The Manning Brothers Rap Career: Eli shows a throwback video to when he and Peyton made a rap video and asked Snoop Dogg if they could be a trio, where Snoop responded enthusiastically.  The rap legend had a hard time coming up with a name for the group, making Peyton laugh.

The Insurance Game: Peyton responds to Snoop Dogg’s desire to get Packers’ quarterback Aaron Rodgers in Pittsburgh next season saying that between him, Rodgers, and Browns’ quarterback Baker Mayfield, they’ve got the insurance game covered.

Snoop Manning: The Manningcast producers showed a photoshop image tweeted by Omaha Productions where Snoop Dogg is posing with the entire Manning family.  Eli was excited to see that he was wearing Snoop’s chain, while Snoop was excited that Cooper and Archie were there.

Mr. Popular: Entering the fourth quarter, Eli complained to Peyton that since he said that it was Eli’s birthday (41) on the broadcast, he now has 85 unread text messages from people who forgot it was his birthday, and now he is going to have to stay up until 1:00 AM responding. Peyton responded candidly, stating “Those are some good friends you’ve got there”.

Missing the Quarter Zip: Packers’ quarterback Aaron Rodgers upon entering the broadcast noted that the market was out on quarter zips since the Manning brothers and the Commissioner took them all.  The bantering continued when Peyton said that if Rodgers wins a 4th MVP award that he should retire, implying that Rodgers should not pass Peyton in that regard.

The Mystery of the Manning Hair: Peyton and Eli question Aaron as to why he has had so many different hair styles over the course of his career, observing the contrast that the Mannings have had the same cut their whole careers. Rodgers pokes fun at Peyton asking if they over-exaggerate the features of the Hall of Fame bust, with Peyton responding saying he told them to make him look 25.