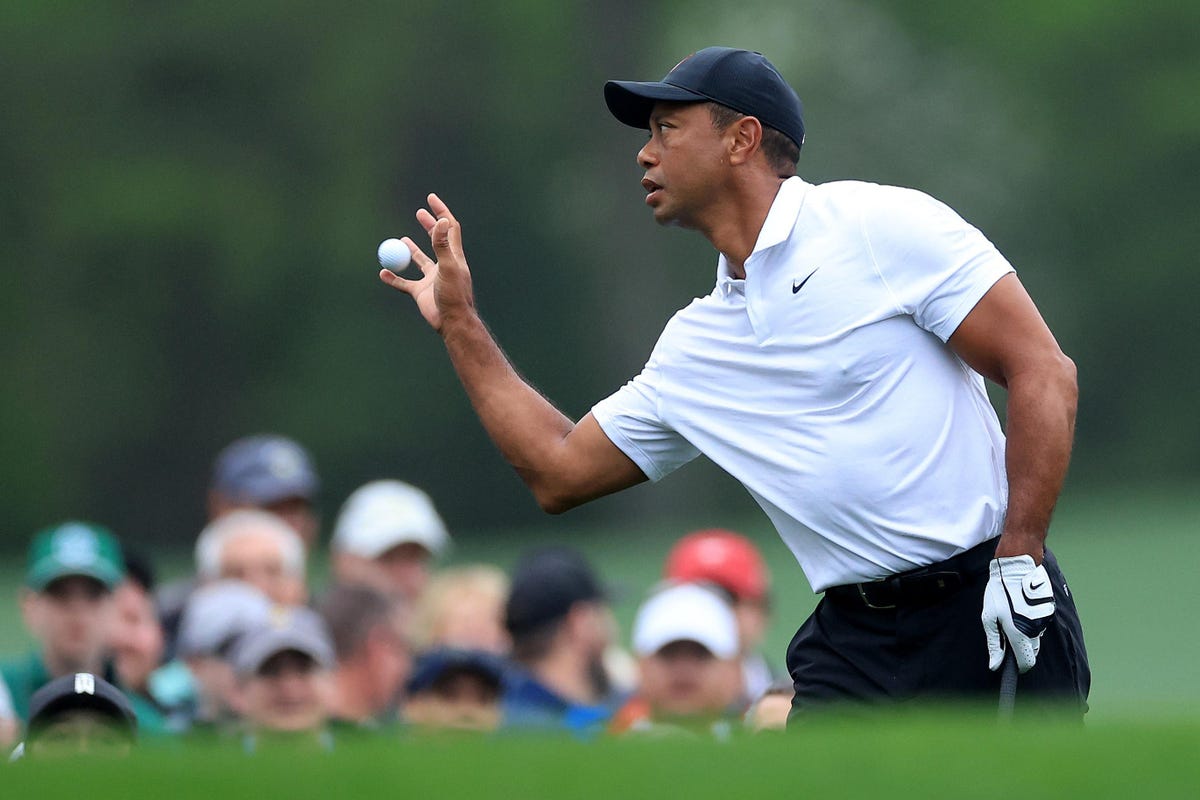 The Masters’ grades are in, for the 86th edition of golf’s first major.

While the sports world reeled in anticipation of Tiger Woods return to major championship golf, an under the radar, (is that possible?), world #1 ranked golfer, Scottie Scheffler eventually put his stamp down on why he has ascended to that position so quickly with deft shot making and an ability to just hit the proper shot, time after time and turn the weekend into a semi runaway.

Coverage of CBS’ event leaned heavily on Tiger and rightfully so. The 15-time major winner was a surprise addition in the week leading up to The Masters but candidly as Tiger struggled mightily, it was a somewhat boring and shall I say, meh Masters. Trust me, I hate saying this and I fully appreciate what Scheffler has accomplished. But there’s a rhythm you can see and hear as the weekend built to its normal crescendo.  As Scheffler separated himself Saturday, you could feel the release of the wind from CBS’s sails.

On to the grades:

The dean of televised golf was his usual and appreciative Augusta National host but to be fair, even Nantz was somewhat subdued as Scheffler stormed into the lead.  Look, it’s hard to keep up the energy when Scheffler is pulling in front by 5 strokes and no one’s challenging. As Scheffler was cruising to victory on the back 9 Sunday, it seemed Nantz was less visible until the leaders got to the 18th tee box and Ian Banker-Finch told him to take it home.

That being said, he did an outstanding job in keeping the Tiger angle and the impossibility of him competing just 14 months after his gruesome injury. There was the fun call he had with Rory Mcllroy and Collin Morikawa on the 18th when both made birdie from the 18th green-side bunker.  In addition, Nantz mentioned “how clear a mind” Scheffler kept on Saturday after hitting his approach in to the trees on 18. Average golfers relate to this as usually average golfers don’t keep their composure.

Normally that’s where I think these broadcasts miss. It is to relate to the viewer on how they can think through their game like the professional golfer. Nantz accomplished that goal. There were some missed opportunities to engage Nick Faldo, the lead analyst to prognosticate on when/if we’ll see Tiger again and there was little to no mention of Phil Mickelson who was AWOL in this tourney.  I get it, a touchy subject, but we’re talking about one of the two most important golfers on the planet.  Remember, we all just live in a Tiger world and so do the networks.  I’ll give Jim a B+ this year.  No faux pas, just a bit too quiet.

Faldo will be remembered more for his overzealous early call on the telecast. It occurred when he took one of the tournament’s most exciting moments away from Nantz, jumping in on the McIlroy shot out of the sand at 18, when it would have been shown on tape.  Not your job Nick, you just got caught up in the moment, but this is not only on Nick but the production truck as well.  Total gaffe there.

He did have an excellent call at the most pivotal hole of the tournament, the 3rd on Sunday. Both of the leaders were in trouble after hitting almost identical approach shots.  Faldo mentioned there were two ways to play the impending 3rd shot from 25 yards off the green. Go high or go low.

Interestingly, both men played each of those shots with Scheffler making his after he went low for an improbable birdie and Cameron Smith going long and settling for a bogey. He also seemed to project a loose swing coming from Cam Smith at the par 3 12th.  Spot on.  Smith dumped it into the water and effectively the tournament was over at the point with Smith taking a triple bogey. Where did the normally reliable Faldo miss at The Masters? Rory McIlroy. McIlroy needs The Masters to complete the career Grand Slam of Golf.  I would’ve liked Faldo’s opinion on why the uber talented McIlroy seemed so sluggish in the opening round with a 73 yet played so freely on Sunday and finished solo 2nd after a closing 64.

On Course Analysts.  Had to be a blow for Baker-Finch as he watched fellow countryman Smith implode on the 12th.  Golf is an important deal in Australia and Baker-Finch wears his emotions with his voice. That’s a good thing and the audience related. I think that Ian and Pepper did a fine job. Dottie has really upped her game the past few years. With lots of wind on Saturday, Dottie mentioned that it was even tough to hear the roars that are customary at Augusta National due to the wind. Again, that’s something a television audience can feel.  This twosome play off each other well and rarely talk over each other.

Verne is still a staple at 16 and 6 but the call is feeling old.  I love the guy, he’s a soundtrack of many a Masters’ thrilling moments but he’s missing putt lengths and making assumptions before they happen. Sometimes they don’t work out.

Amanda is one of the best post round interviewers in golf but she whiffed on Sunday which is why she received a C-.  While interviewing Tiger post round she had one question the golf world wanted to know.  When will we see you next Tiger?  Didn’t happen.  Sky Sports, (Cara Banks), then interviewed Tiger, the question was asked and he responded The Open at St. Andrew’s but wasn’t sure about the PGA Championship next month at Southern Hills or The US Open at The Country Club in June.  I know she’d want a do over there.  She’ll learn from that.

Lead Golf Producer. The production was very good, as usual. Lots more incorporating of drone technology throughout the production.  Some amazing shots of Augusta National not only outside but taking viewers inside and around the famed clubhouse like never before. Some pet peeves that need to be worked out. Too often the drones are an obnoxious sound on television.  For example near the 4th tee they were humming way too loud. This happened too often throughout the broadcast. And as mentioned above with regard to Balionis-Renner, someone has to be in her ear and tell her to ask that question.  That was a miss on production, just as the out of sight out of mind non-discussion around three time Masters champion Mickelson.  At the very least, it should have been addressed briefly and been done with. Instead, we got crickets.

Notes on The Masters-  One thing that’s great about the Masters is the Featured Group’s coverage via ESPN+.  Pretty obvious that Tiger was going to be in a featured group regardless of when or how he was playing.  Colt Knost was featured as the lead analyst on this  presentation and while the rookie has had some solid moments for CBS this year, I thought his off-keel humor was just a bit much for this assignment. What Colt has to learn is that he doesn’t have to be relevant, funny and cool every moment his mic opens up. It was just too much talking and gabbing on his part. Let it breathe, Colt!

Live from The Masters on The Golf Channel-  This program each evening has gone through change and while change is inevitable, I miss the old roundtable of Rich Lerner, Brandel Chamblee and Justin Leonard.

Leonard’s on to network coverage at NBC and in his place is former European Ryder Cup Captain, Paul McGinley. The latter just isn’t my cup of tea on this show. Chamblee loves a good counter-debate to his argument and McGinley is soft and non confrontational. Chamblee has the guts to talk about some competitors in the field whose minds have been focused on the Saudi Golf League and not the attention that Scheffler or Smith have devoted to their games, leading up to the first major.  Well Played Brandel!

Master’s Radio on Sirius XM-  Simple comment here. I listened throughout the weekend. SiriusXM’s on course reporters are phenomenal with a capital P.  Host Taylor Zarzour does an excellent job. That said, Chantel McCabe has to get better and likely will with more reps which are sure to come.

Lastly, Mike Tirico.  I’m going to give him an A for his broadcast duties at last week’s Augusta National Women’s Amateur and an A+ for the Drive, Pitch and Putt Coverage last Sunday on The Golf Channel.  He does such a great job with his positivity for all the kids competing and giving the proper buildup to The Masters.

Not to seem like one of those who only hankers for the good old days, but I preferred when it was Scully, Glieber, Wright, Whitaker, Summerall, and Venturi–pros. By the way, Scully is the only one left from that group. Ben Wright died last summer and it didn’t make much news.