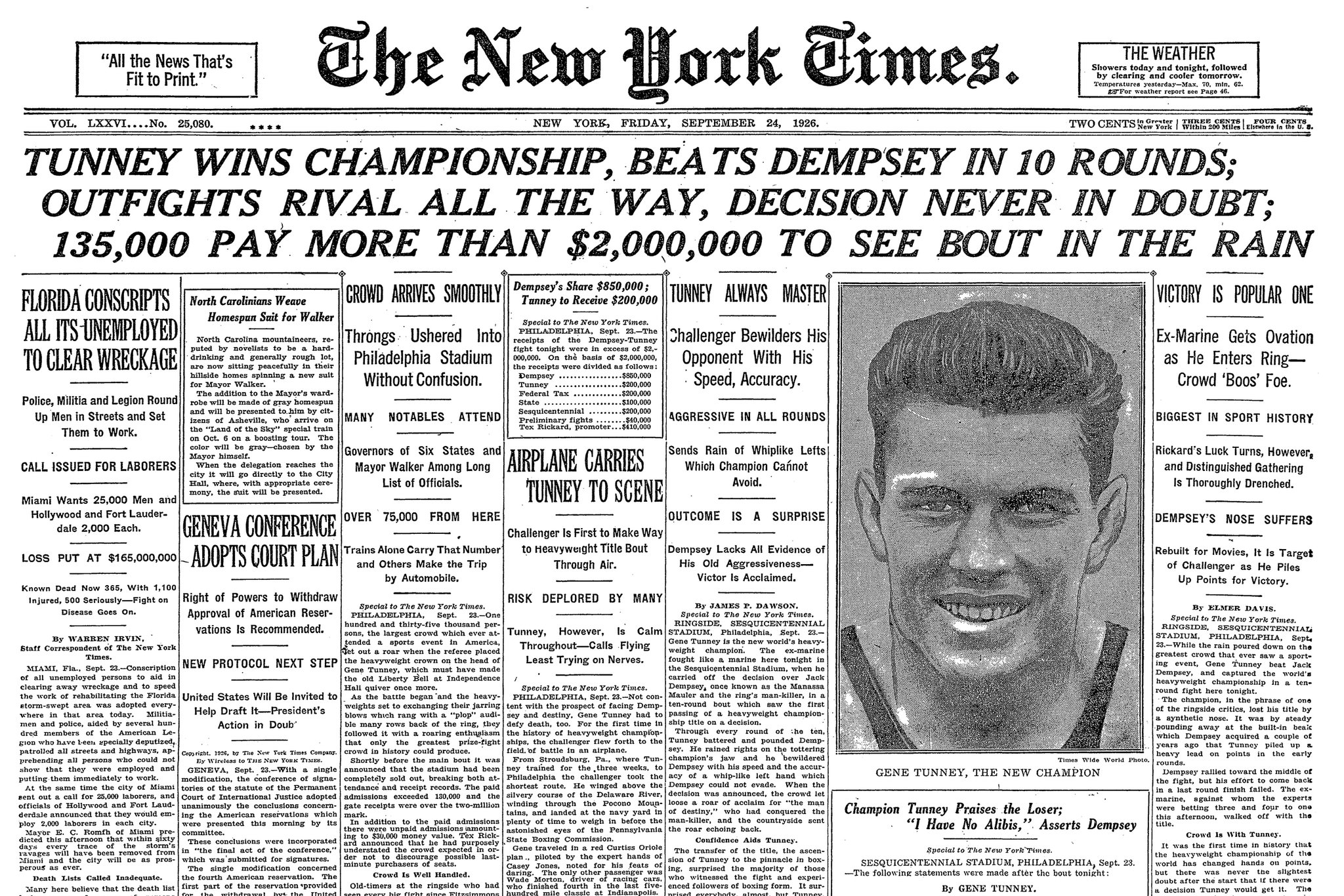 Graham McNamee held sway over broadcasting, born 101 years ago. But he had no one from whom to learn. With radio relatively new and no TV yet, McNamee's calls of World Series, Rose Bowls and big fights were listened to assiduously!

The nation’s first national radio announcer was a real generalist. He did it all, hosting genres of music of all sorts, from classical to big-band,  compositions of all sorts, spanning globe-wide programming. The productions cover the King of Jazz in the 20s, Paul Whiteman, to the early days of the King of Swing, arguably the best clarinetist ever, Benny Goodman. His daughter Rachel told me that her pop liked sports and boxing in particular.

McNamee dominated the first dozen years of the medium. From everything to anything, Graham was there. But the play-by-play science wasn’t yet developed so for Mac, it was learning on the go. The Minnesotan flew off  the seat of his pants. He did major mainstreams like the World Series, College football, Boxing, Horse racing, the NFL’s first Thanksgiving Day game in Detroit in 1934. It was the first one ever carried to that point nationally on radio. TV wouldn’t come around until the late 1940s and the significant bucks until the 1960s. Hard to believe it but the NFL was an absolute throwaway until then.

From 1923 through the mid-1930s, radio’s formative years, McNamee dominated the medium. He was the first on the starting timeline and figured out how to build a word picture, sport-by-sport.  No play-by-player drew the blueprint until Graham started working on his palette. At the start, he took a broad brush and mapped it with little direction. He was hardly Picasso but drew a bond with millions of listeners about twenty years before TV slowly started seeding.

Ted Husing was America’s first true sportscaster. He took a deeper dive developing the mechanism and the theatrics of presenting sports. Husing created the depth charts that spotters and stat-men used to work in cahoots with their play-by-players. McNamee began in about 1922 and Ted not much later. McNamee was born in 1888 and passed in 1944 and Husing lived from 1901-1962.

Ted popularized the Orange Bowl when CBS won the rights to the game. Meanwhile, Graham became one of the most famous broadcasters ever in the country. His early calls galvanized the 1920s with the Rose Bowl, boxing horse racing, college football and the World Series. The decade turned into the Golden Age of Sports.

Bill Stern is likely the third biggest sports name during national sports radio’s first 15 years or so. He did tons for NBC. Stern would fake laterals. He wasn’t always level with fans. If he misidentified the receiver, he’d cover it up by saying there was a fake to Player X.  Stern’s veracity was questionable and he wouldn’t last ten minutes on today’s Twitter. Yet, a quivering voice and stimulating delivery challenged by no colleague. When NBC took Graham off the big events in the mid 1930s, including the Fall Classic, he was reduced to little more than a minor role. One of his last assignments, a newly anointed NFL Game on NBC Radio emanated  from Detroit. Yes, on Thanksgiving Day. A few stadia later, it’s still there.

When NBC and McNamee (left) launched the country’s first ever national football radio broadcast, America looked forward to it collectively. As Curt Gowdy would reference the Rose Bowl, it was the granddaddy of ‘em all. No NFL and no NBA. The NHL was more like a neighborhood game in the cold climes. Boxing was huge, the horses got attention and baseball ballooned.

But one of the most popular men in America died of a broken heart during the war. He was only 54. The Baseball Hall of Fame gave him the coveted Ford Frick Award for broadcasting in 2016.

Red Barber spoke complimentarily of McNamee, saying that he had no one to follow and still got the job done. In 1935, the two passed a baton. Red did his first World Series when Mutual was formed. Meanwhile, Mac was taken off NBC’s.

At the time Red was doing the Cincinnati Reds games locally for the Mutual affiliate there, WLW, Cincinnati. In those days, up to four networks aired the Classic. Off the play-by-play assignment himself, McNamee did only the pre-game show for NBC. But when done, he went into the Mutual booth to listen to this young phenom Barber. After a couple innings, Graham gave Red a soft squeeze on the shoulder and said, “You’ve got it!” He then left.

There was no TV of course nationwide or anywhere then and wouldn’t be until after the war.

The New Year’s Rose Bowl would spawn others like the Sugar, Cotton and Orange. In the ensuing years, between then and now, there would be more bowls than parades.

When McNamee started, he needed more help than initially given. An associate would sit a few feet away and talk to him in low tones, effectively silencing him. In those days it was only the play-by-player heard. In essence when the game was being played there was no analyst.

Warren Corbett writes, “One of young Lindsey Nelson’s earliest memories of radio was Graham McNamee’s NBC broadcast of the second Jack Dempsey-Gene Tunney heavyweight title fight. McNamee said he was so close to the ring that he could reach out and touch the canvas.” Nelson added, “Being close to the action in a faraway place sounded like heaven to this 8-year-old.”

Over the next fifty years, broadcasters would employ a battery of spotters and statisticians. But the announcer had to still be adequate enough to describe the basics so that listeners can follow the game at home. Not all were then in the 20s and early 30s.

Vegas Raiders – Thank God for the alternative. Jason Horowitz was hired yesterday by the NFL team as its new play-by-play voice. Horowitz has somewhat of an uncommon and choppy voice, yet definitely improving on his play-by-play. I wish him all the best. Following Brent in Vegas is no easy task. He worked hard up the ranks and finally made it to the NFL. A trio of fellows he’s following in that position are Bill King, Greg Papa and Brent Musburger. Legends. Jason uses some platitudes. Still, I’m told he’s a bright fellow so he’ll do well.

From what I gathered, Brian Custer, talked with Vegas. Might be okay in the studio. Horowitz is a better hire than he for play-by-play. He says he’s keeping his ESPN job.

When Red and Mel became the first Frick winners, Red devoted part of his speech to how great McNamee was, and that he should get the award. It took a while. But while McNamee certainly couldn’t compare with the far greater knowledge that today’s announcers have, he was exciting. I think Red said McNamee got 5,000 fan letters after one World Series, and that would be a staggering amount today.

The comment that Bill Stern “used to fake laterals” (in football) reminds me of Clem McCarthy who misidentified the winner of the 1947 Preakness Stakes when he admittted on the air the egregious error and also said “well, you can’t lateral a horse.”