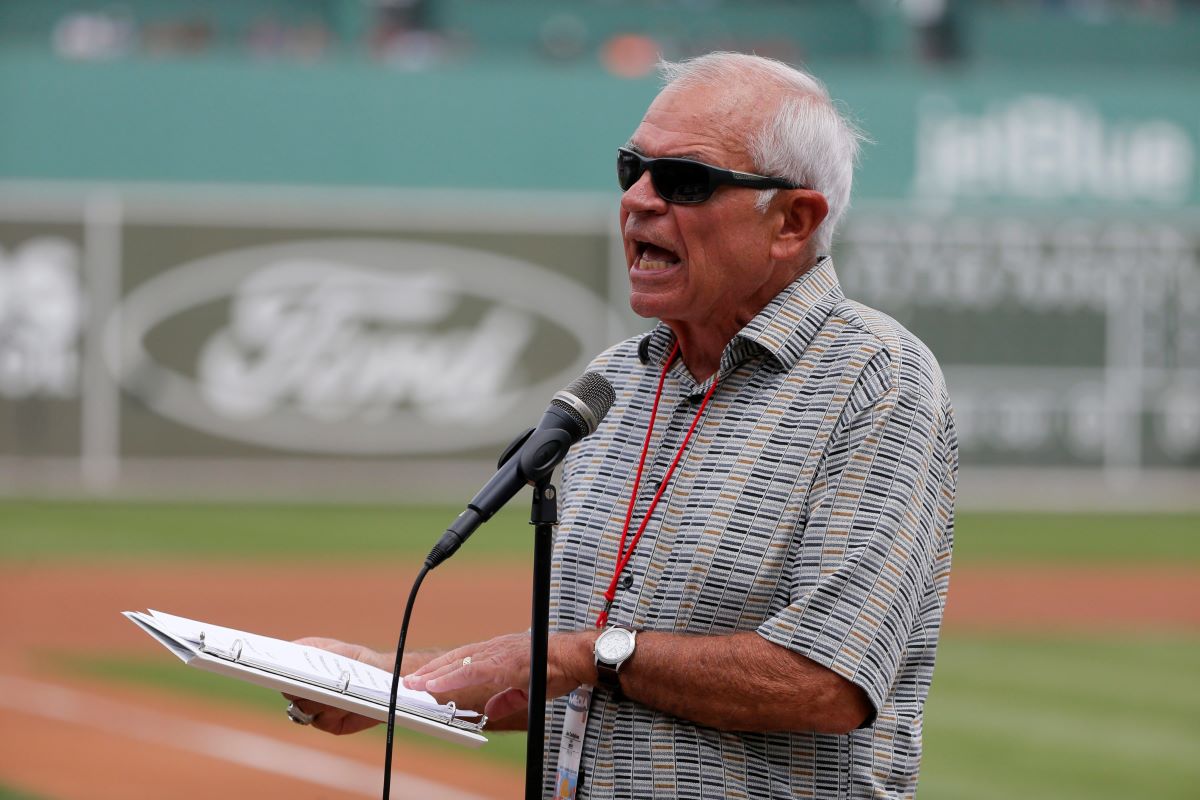 The Sox' popular Joe Castiglione - 39 years behind the radio mic. No one has done Fenway longer!

Today continues our look at radio/TV Voices of all of baseball’s 10 post-season teams by Curt Smith, former Speechwriter for President George H.W. Bush and author of 18 books, including the 2021 Memories from the Microphone: A Century of Baseball Broadcasting. (click the cover to the left or here to order your copy.)

The series features one Voice from each club who represents that franchise: current, retired, or deceased. Today we profile Joe Castiglione, long-time radio Voice of the Boston Red Sox, who play in Tuesday’s October 5 American League wild-card game.

The series features one Voice from each club who represents that franchise: current, retired, or deceased. Today we profile Joe Castiglione, long-time radio Voice of the Boston Red Sox, who play in Tuesday’s October 5 American League wild-card game against the Yankees.

In recalling the Red Sox last third of the 20th century, long-time radio Voice Ned Martin quoted Ted Williams and William Faulkner. He and 1974-78 partner Jim Woods completed each other’s sentences, communing on-air by “a hand gesture, shrug, raised eyebrow,” wrote the Boston Globe. After a game, “broadcasters, writers, and the coaching staff [gathered] during which Martin and Woods would be spellbinding with their baseball tales.

In 2015, Castiglione set a record for consecutive years on Red Sox radio and/or TV: 33 since 1983, topping Martin’s 32, in 1961-92. Long ago Joe left a Hamden, Connecticut, youth to make Sox wireless his baseball leitmotif, his warmth a reason why soldiers of Red Sox Nation fill parks wherever the Olde Towne Team plays. “We travel well,” Joe describes their Diaspora, packing Camden Yards, Safeco Field, and Anaheim’s Big A.

In 2010, Forbes Magazine wrote, “[They] are so devoted they top our list of ‘America’s Best Sports Fans.’” Under extreme makeover, Castiglione evolved into everything Red Sox from a boyhood that was “all Yankees,” he said, little 1950s and early ’60s Sox interest west of the Naugatuck River. “Later, the area swung Boston’s way, but back then Mel Allen was the globe.” Once the Yankees radio/TV Voice hailed a taxi at night in Omaha, the driver not seeing who it was, and said, “Sheraton, please.” The cabbie swiveled his head, almost driving off the road.

Yogi Berra said, “If you can’t imitate him, don’t copy him.” Emulating Mel, Joe called backyard fungoes like the 1939-64 Yankees announcer, asked Santa for a beer glass to pour sponsor Ballantine Ale, and half-a-century later confessed that “Allen’s the reason I’m in broadcasting today. Gowdy was great on nuts, bolts, and action, so accurate.” Mel was the  ultimate celebrity sportscaster, a thespian whose 1964 pinstriped firing stunned.

No pennants in 1965-75 after 14 in the prior 16 years briefly cost the Yankees their identity—harder to accept than the banal 1950s and early ’60s Sox having none. At Colgate University, Joe aired football and basketball, was a campus disc jockey, and called his best part of college “Cooperstown being down the road.” In 1967, he interned at Yanks affiliate WDEW Westfield, Massachusetts, for the first time visiting Fenway. “It knocked me out,” said Castig, seeing the light.  No Evil Empire could match the Sox’ Impossible Dream.

Castiglione (left) graduated in 1968, then moonlit as a part-time salesman before getting an M.A. at Syracuse. To pay tuition and “bolster my resume,” he worked part-time in Youngstown, Ohio, airing football, hoops, sports at 6 and 11 p.m., and “six radio shows a day for very little money.” Joe spent the next decade in Cleveland news and sports, did the 1979 Indians and 1981 Brewers’ split-season title, paraphrasing Russ Hodges on Bobby Thomson: “The Brewers win the second half! The Brewers win the second half!” Cheeseheads still chant it among bowling, brats, and beer.

The ex-college d.j.—“Give me the Rolling Stones, the Kinks, and my favorite, Motown Sounds”—found his new partner caught between Bing Crosby and Patti Page. “Ken was sort of like the Red Sox fan, likes things as they were.” On the field, 1983 sixth-place things were dismal. “People ask, ‘How do you sound excited working when your team is down 20 games?’” said Joe. “They don’t understand that no two games are the same. It’s like a lousy long-playing record. You look for a good song to play.”

His first year’s most abiding tune—the unforgettable “Yastrzemski Song,” by Jesse Cain, to the melody of “The Hallelujah Chorus”—hailed a man who retired in 1983, running around the field, handshaking everywhere, then playing his old position of left field for the first time since cracking his ribs in 1980. To Peter Gammons, it “passionately explain[ed] that he understood what makes the Olde Towne Team what it is.”

Yastrzemski played every inning in a Red Sox uniform. Before his final game, he told the Fenway crowd: “I saw the sign that read, ‘Say It Ain’t So, Yaz,’ and I wish it wasn’t,” thanking the Nation, owner Jean Yawkey, her late husband Tom, and third-year manager Ralph Houk, saying of the latter, “I wish we could have been together for [all] 23 years, ’cause I know we’d have won more pennants.”

None of this reassured the broadcast rookie—living the whole season at Boston’s Susse Chalet, his family in Cleveland because it couldn’t sell the house. “Twenty-six dollars a night,” Joe said. “But the worst part was packing my trunk and taking it to the basement each time we went on a road trip so I wouldn’t be charged for the room while I was away.” Meanwhile, Hub print made the year seem like a decade. Why had Jon Miller left for Baltimore? Why wasn’t Martin on radio, his natural milieu, not TV? “I got ripped a lot that first year,” said Castig, “and it hurt.”

By 2000, the Globe’s Bob Ryan wrote, “It’s time someone finally said it: Joe Castiglione is the official ‘Voice of the Boston Red Sox.’” Typically, Joe demurred. “It’s different today,” he said, “with the proliferation of media. To call one person that would be misleading.” In turn, Ryan cried tommyrot: “The No. 1 radio man will always be the essential link between a … team and its fans.” In New England, “that voice belongs to Joe Castiglione,” still enormously popular, his somewhat reedy tone easily offset by decency, credibility, precision, and encyclopedic baseball knowledge.

“I’ve always been blessed with good recall,” he told Ryan. “But I have a system. I start a file card on every player, in longhand because it helps recall.” As a rookie, Joe recollected growing up and watching the Mantle-Maris Yank on New York Channel 11, their skipper Houk, decorated in the Battle of the Bulge. Late in 1983 the Sox manager asked how Castig was. “I don’t know, Ralph,” he said. “I’m not sure I’m coming back.” His boyhood totem put an arm around the rookie. “Everybody’s happy,” Houk said. “You’re doing a hell of a job.” At that moment, Joe likely rued being too young to have served the Major at Bastogne.

In 2004, the Olde Towne Team won its first World Series since 1918. In Game Four of the World Series v. St. Louis, Boston led in sets and score, 3-0. With two out, the “one-oh pitch,” said Joe Castiglione. “Swing and a ground ball! Stabbed by [reliever Keith] Foulke! He has it! He underhands to first! And the Boston Red Sox are the world champions! For the first time in 86 years the Red Sox have won baseball’s world championship. Can you believe it?” No, still.

More than a decade later, David J. Halberstam described “Joe wafting softly through New England summers, a steady soundtrack on the radio. No nicknames, no hype and no gloom, always sunny and easy-going,” easing the region’s fear that the Red Sox sky was always falling. When Joe Castiglione broke Ned Martin’s record of 32 straight years on Sox radio and/or TV, one institution succeeded another.

I am tempted to ask why Joe Castiglione has yet to get the call for the Frick Award. But then it occurs to me that Ken Coleman, Ned Martin, and Jim Woods haven’t, and they all should have gotten it already.