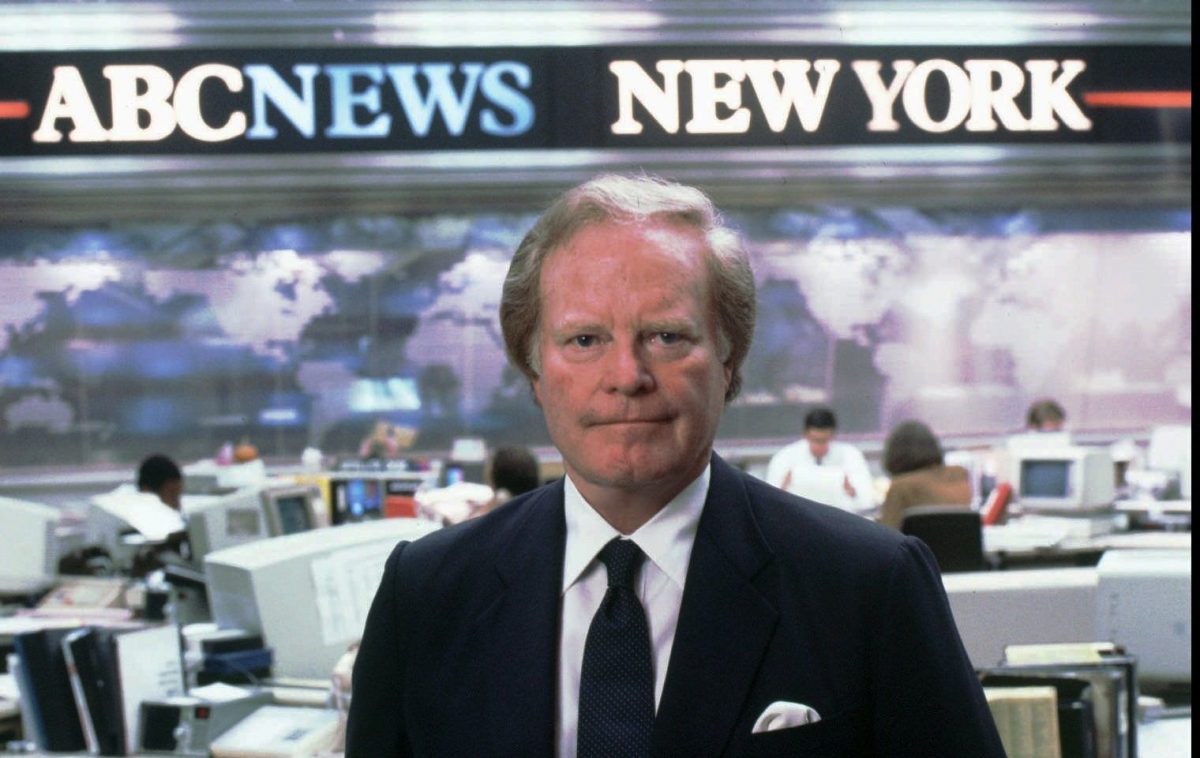 Roone Arledge, considered by many as the founding father on network television sports, had at least one dissenter

ESPN ran five games on Christmas Day.  The quintuple-header turned into an endless marathon. Pro basketball was on for some 13 straight hours.

Mike Breen has always been a comfortable listen. If he has an ego, I’ve never seen it. NBA fans across the country have embraced him. I’m told by ESPN co-workers that he’s low maintenance.

More so than any network NBA play-by-play voice I’ve heard, Breen understands what makes the game tick, whether on the practice court, the locker room or the game floor. He’s a true student of the game who can talk the intricacies of the NBA 24/7, breaking down every player in the league, from stars to rarely used subs.

For that matter, Breen only does the NBA, nothing else. Unlike others through the years who wouldn’t know a pick ‘n roll from an egg-roll, Breen played and did some refereeing. He has his pulse on the game’s finer points, from broad strategy to customized tactics.

Breen also knows the rules cold. As such, I was surprised that he was caught off guard late in the tight Clippers-Laker game on Christmas night. In the final minute, the Clips’ Patrick Beverley blocked LeBron James’ potential game tying three point shot. The ball carried out of bounds on an altered trajectory. It raised the critical question of who touched the ball last and whether the Clippers or Lakers would have possession. The Clips were up three at the time.

While the block was under replay review, Breen told the audience that the ball’s off whoever forced it out not who necessarily touched it last. Rules interpretation expert Steve Javie interjected from the studio and had to correct Mike. It’s s who touched it, no who forced it out. The replay confirmed that Beverley blocked it off LeBron’s fingertips out of bounds. Clippers ball. Javie, the former NBA ref, is now a deacon in the Philadelphia diocese. His dad, Stan Javie, was an NFL ref from 1951-80.

Of the other play-by-players, Adam Amin keeps growing. The Valparaiso alum is worthy of his continued move up the ESPN depth chart. Ryan Ruocco is showing flashes of some improvement and is less sophomoric than in the past. Like many young announcers though he’s still trying to find his style which seems to change broadcast to broadcast.

God bless Doris Burke but I’ve never learned a thing from her about the game.

The NBA Commentator-in-Chief is Hubie Brown, 86. On Wednesday, the basketball lifer raised the name of the late Moses Malone, the league’s greatest ever offensive rebounder. In his usual instructional tone, Hubie described how Moses did it. When a teammate took a shot, Moses would station himself behind the rim and ambush his defender by blocking him out for the rebound. Hubie’s partner Mark Jones is top notch too. The Jones-Brown team is fabulous!

What I found while looking up something else:

ABC’s Roone Arledge is considered the progenitor of network television sports, the creative genius, the man who spawned Dick Ebersol and eventually his tree of admirers and aspiring underlings. He’s probably best known for striking a deal in 1970 with then NFL commissioner Pete Rozelle to put the league’s games on the most coveted and sacred times of network television, primetime. Before cable and today’s unending media distractions, 90% of American television sets that were turned on in the evening were set to one of the three networks, CBS, NBC or ABC. The Foxies weren’t born yet.

Roone was apparently a holier-than-thou kind of guy. Those at competitive networks in Arledge’s time or others who excelled later aren’t put on the same pedestal.

As it turns out Arledge had his dissenters and one was particularly vocal. Jim Spence spent 25 years under Arledge at ABC Sports as a Senior Vice President. Apparently, when Arledge’s responsibilities were broadened to include ABC News, Roone didn’t recommend Spence for the top job. So Jim left a disgruntled employee in 1986. A couple years later in 1988, Spence wrote an angry book, ‘Up Close & Personal: The Inside Story of Network Television Sports. The publication is filled with juicy venom. Library Journal aptly called it a “Kiss and tell memoir.”

Here’s some of what Spence alleged:

Howard Cosell drank before telecasts. He once threw up on the boots of Monday Night Football partner Don Meredith.

Cosell became “increasingly vicious, bitter, even at times downright venomous. Howard was no longer funny. He was vitriolic. He didn’t trust anyone.”

Al Michaels is ”the best all-around play-by-play man in the business . . . but still very insecure; he`s excruciatingly concerned about his image.”

John Madden is ”likable and enthusiastic, but . . . I (Spence) for one don`t think his content includes as much substance as the critics claim it does.”

Spence leaves the best for his old boss, Arledge.

Spence quoted Chris Schenkel, the longtime CBS and ABC voice, “Roone Arledge has always been insensitive to other people`s feelings.”

And get what Spence said about the incomparable Vin Scully: ”Overall a man of style and versatility. Sometimes, though, he gets a little heavy for his audience; in fact, I sometimes wonder if he has sat up half the night in his hotel room memorizing chunks from `Bartlett`s Familiar Quotations.”’

Richard Deitsch identified Kevin Harlan as The Athletic‘s Sports Broadcaster of the Year. Well deserved. Too often, Kevin’s enthusiasm is mistaken for screaming. His sepulchral command never grates. CBS should elevate him to number two on the NFL depth chart but never will. While Ian Eagle is very sharp and spot-on, he talks much and appeals to a minority of America, those entertained by warped humor.

Those who’ve reached the zenith of network TV, a top all-around number one, didn’t employ warped humor. Think Jim Nantz, Brent Murburger, Pat Summerall, Al Michaels, Curt Gowdy or Joe Buck. The very best, add Vin Scully of course, are loved because of their neighborly warmth, friendly humor and crisp storytelling. Contrary to provincial belief, there is an America on the other side of the Hudson.

Harlan brings many of those qualities.

After posting our list of 119 broadcasters 70 or older, I heard from Indiana broadcast icon, Don Fischer who told me he’s 73 not 72. Not many would be bold enough to admit it, at least unsolicited. Don is still sharp and confident. Also, Celtics’ TV voice Mike Gorman is 72 not 71 as I had it listed. Talking of Gorman, he’s among the top two or three local NBA television play-by-players.

The 70 plus list is now 121. Dan Belluomini is 78 and does color for the Pac-12 Network and Larry Ward is 72 and calls baseball for the Southern league’s Chattanooga Lookouts.

Congrats to John Ourand of Sports Business Journal who broke the story that CBS will lose the SEC after the 2023 season. John also made predictions on what the NFL might do when its television rights are up. He speculates that the day of splitting the package by NFC and AFC might end. You’ve seen lots of crossover this year. CBS ran some NFC games and Fox AFC. Ourand thinks the Sunday afternoon packages might be broken down by#A and #B. He also suggests that ABC will be in the loop, perhaps airing the Thursday Night strip.

Bob Papa, 55, is a gentleman. He’s excellent on golf and continues to enjoy an accomplished career. Bob’s laid back, knowledgeable and always in command. Golf doesn’t require him to ever raise his limited timbre to an uncomfortable screeching level. But his football on radio is sub-par, not due any lack of description. He’s right on top of things and listeners are never left on a lurch. But Bob’s static pacing and tick-tick, short cadenced delivery are uninspiring and somewhat sleep inducing. On the other side of town, the call of the Jets’ Bob Wischusen is full of spunk, energy and graphic detail.

We learn from everyone.

Sorry for veering out of my lane and sharing these wonderful maxims I’ve heard through the years from the always unflappable Art Cashin, 78, who keeps investors calm on CNBC.

Cashin is on CNBC several times a day, often with Bob Pisani. Art’s been working the trading floor at the New York Stock Exchange for well over fifty years. He’s witnessed it all, rallies, selloffs, euphoria and misery. Whether the market is up or down, Art calms viewers’ nerves by his own tranquil demeanor. His quotes are legendary. You don’t have to invest to appreciate them:

I read Spence’s book and thought it was a bit holier-than-thou, though that’s the province of any author. In his own book, Terry O’Neil lets Spence have it and admits, as I recall, to a total of one error in his own career, but that’s another story. And that isn’t, as I say, meant to be overly critical: If I wrote my story, I’d probably be my biggest fan. Don Imus’s death reminded me that I first heard Mike Breen doing the sports updates on his show, and Imus could and would pick on him in a way that he… Read more »