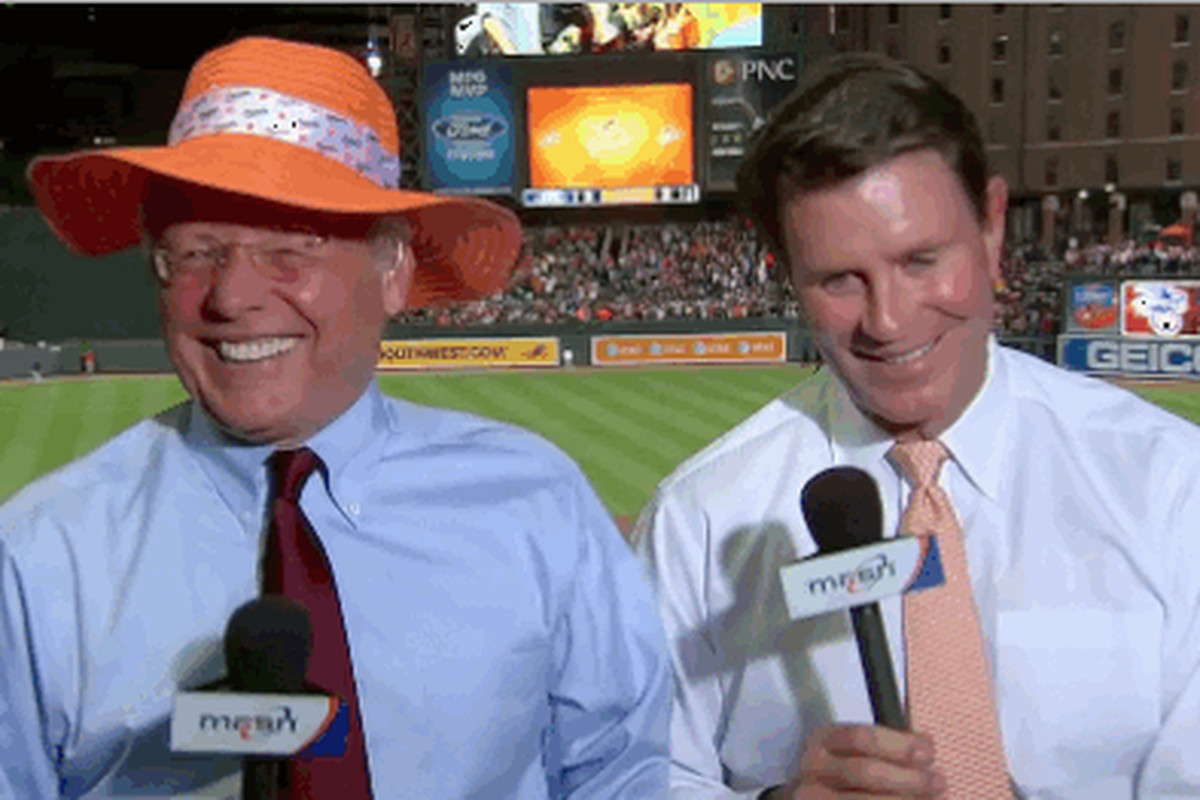 Gary Thorne and Jim Palmer, an Orioles TV team for years, won't be working the games this season because of age precautions.

Yes, ladies and gentlemen, there is a restart. But do we know what to expect? Boog Sciambi did an exhibition baseball game earlier this week on ESPN. In the middle of the seventh, Boog said, it’s stretch time but quipped that there’s no one in the ballpark to stand and stretch. Get ready for some oddities. It’s baseball first, followed by the NBA, the NHL and the NFL.

The Orioles telecasts are being completely revamped for 2020. Jim Palmer, 74, Gary Thorne, 72, Rick Dempsey, 70 and Tom Davis, 72 will not be part of any 2020 broadcasts. It looks like Ben McDonald, 52, and Mike Bordick, 55, will be the main analysts. Scott Garceau, 68, and Kevin Brown, 30, on play-by-play. Palmer will contribute remotely from time to time on TV.

Oldest baseball announcers today: Bob Uecker (Brewers),  86, John Sterling (Yanks), 82, Mike Shannon (Cards), 81 and Dave Van Horne (Marlins), 80. Uecker and Shannon have essentially done only home games in recent years. Sterling doesn’t want to give it up but health concerns last year forced him to take time off. Van Horne apparently doesn’t want to retire but the club didn’t sign him to do a full schedule. The Marlins have the lowest radio audience in the National League. In Miami, they’re on a station whose nighttime signal is no better than a 40 watt light bulb. Do they still make those?

Every A’s game this season will be carried on A’s Cast (Online and TuneIn), the Club’s 24/7 audio streaming station and official home of A’s audio content. The decision to go exclusively online was announced in the winter but there were reports that the club was rethinking the decision in recent weeks. So for now, the games will be online only in San Francisco-Oakland.The team will not have a local Bay Area over the air radio affiliate. There will though be 11 network affiliates spread elsewhere through the team’s geographic contour. Ken Korach remains the lead radio voice. This will be his 25th season.

When Harry Caray started with the White Sox in 1971, the team couldn’t get on a major AM station. Back then, FM represented something like 10% of radio’s total audience. So the Sox and Caray were on FM when most cars had only AM radios. The world has changed.

When the baseball season starts this weekend, the Reds booth will be without Hall of Famer Marty Brennaman. He took over for Al Michaels in 1974 and retired at the end of last season. His sidekick in recent years Tommy Thrall becomes the lead voice.

In Chicago, following the death of Ed Farmer, the White Sox appointed Andy Masur to succeed him in the radio booth. Masur served in a tertiary role last year, pre and post and an inning here or there. Prior, he was on the Padres broadcast staff.

Through the years, there have been only two baseball All Star games that were played in August. For four years (1959-62), MLB played two each summer. On August 3, 1959, the second of the two ASGs was played at the Los Angeles Coliseum. NBC had it and Mel Allen and Vin Scully called it. It was Vin’s first ever ASG assignment. The game started at 4p PT. That meant 7p ET.  With more TV viewing at that hour, the game did a healthy rating. The first official primetime ASG was played in Anaheim in 1967.

Twenty two years later, in 1981, baseball was suffering from a labor stoppage. The restart began with the ASG in Cleveland on August 9th. Baseball had been halted from June 12th to July 31st. And yes, Vin did the ASG nationally on CBS Radio. So Vin Scully did the only two ASGs played in August.

When Warren Buffett opened Berkshire Hathaway’s annual shareholder meeting this spring, he gave Dr. Anthony Fauci a big shout out for his service to our great country during this Covid-19 pandemic. Buffett said, “I never heard of him until recently.” Well few did, but we all have now. Fauci will be 80 on Christmas eve. One fellow who knew him more than 60 years ago is longtime NBA executive Donnie Walsh, who was reared in New York and teamed with the immunologist on their high school basketball team at Regis High in Manhattan. Fauci was the point guard. Coach Mike Krzyzewski now calls Fauci, America’s point guard.

Well, Thursday night in DC at the Yankees-Nats game, he’ll throw out the ceremonial first pitch. Too bad, there will be no fans there to applaud and recognize his pandemic efforts.

Good to see that the icon will be a contributor to CNN on issues related to sports. I always thought that Bob was perfectly capable of covering news. Brent Musburger was a news anchor in Los Angeles earlier in his storied career. Dave Marash was a local anchor in New York and network newsman for ABC. He also did sports for NBC’s Grandstand and ESPN’s MLB coverage.

The Costas addition was made official by anchor Wolf Blitzer when the two appeared on CNN last week. Then earlier this week, CNN issued a news release. CNN doesn’t do many long form interviews. Yet if the network is planning anything sports related, CNN has its man. Bob will continue to call games for MLB Network. Years ago Bob filled in briefly for Keith Olbermann covering news segments for MSNBC.

Kevin Harlan and Ian Eagle will work play-by-play for Turner’s coverage of NBA games early in the Bubble at Disney. Brian Anderson gets later games. Again, due to age precautions, Hubie Brown, 86, and Marv Albert, 79, will not work for ESPN and Turner respectively.

Howard Cosell was disconsolate and bitter late in life. After he was less visible on network television late in his career and then retired in 1985, Cosell turned quite melancholy. Neal Pilson, the Yale attorney who became the president of CBS Sports, remembers walking on a quiet morning along the sores of an Eastern Long Island beach when he spotted Howard sitting forlornly, the picture of a lonely man on a street bench. Pilson said that there was a look of despair in Cosell’s face as he gazed out over the horizon. Network sports’ once biggest name sat there chewing on his always present cigar. Pilson said he just didn’t have the heart to go over and strike up a conversation. The broadcaster inextricably linked to Monday Night Football and Muhammad Ali died in 1995 at age 77.

Cosell would speak derisively of his contemporary Jack Whitaker, yet it’s interesting to note that Jack himself spoke nicely of Howard, telling us in 2018,  “I liked Howard Cosell as a person. He called me from time to time to see how I was doing. He cared about me and about others in the business. He would share job openings with me that might be good fits for my friends.”

Howard had a lot to do with the hiring of Bill White as a Yankees radio and television announcer in 1971. Cosell reached out to Lee MacPhail and the Yankees organization pushing White who had some broadcasting experience but not much.

As the story goes, when Bill played for the Cardinals, White needled announcer Harry Caray, telling him how easy a job he had calling baseball. So Caray thought ‘I’ll show you.’ Harry got White part time work on the city’s biggest radio station KMOX. White later did broadcast work in Philadelphia where he played with the Phillies in the late 60s. There, he continued to dabble in broadcasting. When he retired in 1969, he became Sports Director of Philly’s WFIL-TV.

With the Yankees, White broke the race barrier becoming the first full-time black broadcaster calling baseball locally. Because Bill had not done play-by-play, he was slated to do only color early. But one day at spring training, his partner Phil Rizzuto spotted old teammate Joe DiMaggio in the stands, so he barged out of the booth to chat with the Yankee Clipper. Alone in the booth, White was left with no choice but to do the play-by-play.

Rizzuto too learned the hard way. When he got the Yankee gig in 1957, his partners were taskmasters Mel Allen and Red Barber. Suddenly at spring training, both left the booth purposely at the same time to get a hot dog and Rizzuto was forced into play-by-play action. He too had no experience. But that was another story. The two pioneer voices were not happy that the ex-athlete invaded the broadcasts, forcing out a solid announcer Jim Woods in the process. Allen and Barber had a little of ‘we’ll show him.’