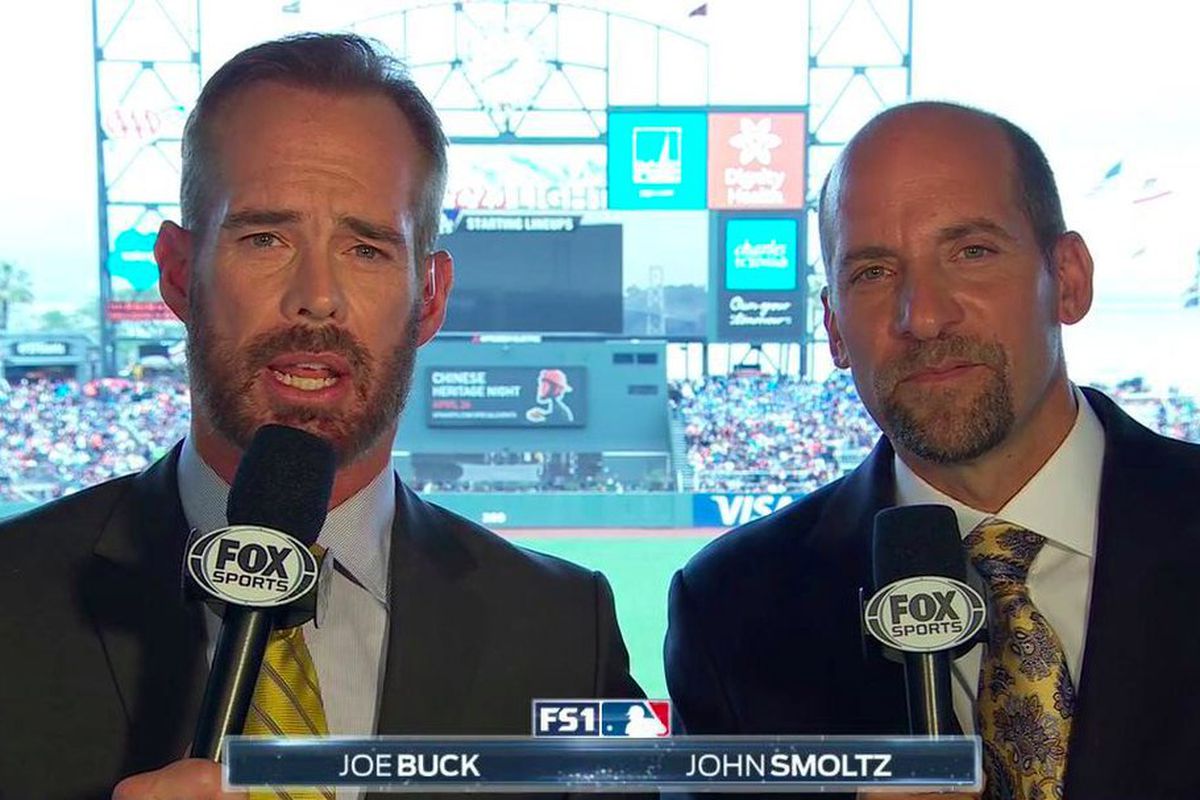 Joe Buck has been a prominent network voice for a long time. He did his first World Series in 1996 at age 27 and was the youngest broadcaster to ever call a Super Bowl, 35.  As an NFL play-by-player, I have him ranked fifth all-time behind, Al Michaels, Pat Summerall, Dick Enberg and Curt Gowdy. He’s that good.

I’ve grown to like his baseball too and I’m comfortable with his knowledge, thoroughness covering the basics, quickness, measured rhythm, preparation, strategic anticipation, ability to identify pitches, wit and sharpness. But baseball is more. Vapid lulls are constant reminders that baseball on television requires colorful stories. No, not numbers, nuggets. One nugget resonates more than 10 sets of statistics

Light moments, anecdotes and human interest thumbnails enrich baseball telecasts. It’s been that way since the first World Series was televised 72 years ago. In his autobiography, Lucky Bastard, Buck proves that he’s a gifted and entertaining storyteller. I just wish we would experience more of his yarns on the telecasts.

John Smoltz is magnificent analyzing the game from the eyeballs of a Hall of Fame pitcher. He misses nothing from a perspective of the mound. And yes, pitching is 90% of the game. But I miss the other 10%. Frankly, I tired of Tim McCarver as did others. Joe himself has said that John reinvigorated his baseball work.

Joe Davis, 31, filled in for Joe Buck during the ALCS when the NFL took  priority. Davis is soft spoken and understated. But unlike the greats, a Scully, Allen, Nelson or Jack Buck, he didn’t give viewers the apt sense that they’re witnessing an event of heightened importance. Yankee Stadium is not the New York Public Library. An announcer’s spirited enthusiasm should at least be palpable in the tenor of his voice, if not contagious. Network voices can call games straight down the middle and still be emotionally invested. But I never got the feeling that Davis was very engaged.

Meanwhile, Brian Anderson was the dinner company you’d love to have. He’s upbeat, human, not afraid to show some personality and the timbre of his voice is cheerful. Anderson, 48, is a 3 sport man who’s capable of calling a World Series. He did his time in the minors, calls Brewers games and is a breezy listen.

This said, Ernie Johnson was real good on the Nats-Dodgers, NLDS. He was blessed with a heck of a finish and did an outstanding job on the Kendrick grand-slam in game #5.  In the network world, voices are pigeonholed. Ernie is heaped with praise for his work in-studio on the NBA and he’s not thought of as a baseball man first. The fact is that his dad Ernie Johnson, Sr.  pitched with the old Milwaukee Braves and was the team’s popular and longtime announcer on radio and television. Ernie Jr. grew up with baseball and is a good storyteller. This came across during the series that he covered.

Thirty years ago in 1989, Al Michaels worked the last World Series that ABC ran exclusively. It’s one that will never be forgotten, particularly by the millions watching on television and certainly those in attendance at old Candlestick Park in San Francisco. Al was no stranger to the stadium. After calling Reds games for three seasons, he got a job for roughly three times the dough with the Giants. He was with the San Franciscans for three years, 1974-76.

Michaels has always been enamored with aerial maps too so he was certainly familiar with the Bay Area when he opened the broadcast for game#3. Oakland was up 2-0 in the Series.

During the open, “there was this thrust,” Al recalls. “I thought we were about to be pitched from the mezzanine to the lower deck.”  Having spent his teen years in Southern California and those three later years in Northern California, Michaels knew what just happened. He told the audience, “We’re having an earthquake.” But viewers only heard part of the sentence because ABC’s power was knocked out.

Michaels left the booth and reported from outside Candlestick. He appeared on-air with the late Peter Jennings and Ted Koppel of ABC News. In his book, You Can’t Make this Up,  Al says: “I was very careful that night not to say anything that I wasn’t certain of.” In other words, he didn’t give into the temptation to speculate. For his work that night, Michaels was nominated for an Emmy for news.

On network radio over CBS, it was Jack Buck and Johnny Bench on the call that unforgettable night.

The measure of any studio show starts and ends with Inside the NBA starring Charles Barkley, Shaq and Kenny Smith. Still, I like the loose and cozy characters on Fox’ baseball coverage. Host Kevin Burkhardt, the one time car salesman, keeps the show moving entertainingly. The main trio are naturals, Alex Rodriguez, Frank Thomas and David Ortiz.

Red Sox radio voice Joe Castiglione tells me that Smoltz is the “second coming of Jim Kaat” as a commentator. Castiglione also speaks highly of Will Flemming, Giants and ESPN announcer, Dave Flemming‘s brother. Will does some Red Sox play-by-play as part of the revolving door format of announcers who partner with Castiglione.

Fifty years ago, the World Series was won by the Mets, a shocker over the favored Baltimore Orioles. It galvanized New York. Mets’ announcer Lindsey Nelson joined Curt Gowdy in the NBC booth, Ralph Kiner worked on the NBC Radio Network and Bob Murphy was the lone Mets voice who was left out. In those days, the teams didn’t produce local radio broadcasts during the Series. Murphy had no pulpit and it angered him for years.

Bob Gibson, who did some broadcasting after his marvelous pitching career, is suffering from cancer. We wish him the best. Gibson actually voiced basketball games on New York television covering the Nets when they were still in the old ABA.

The Marlins have confirmed that Dave Van Horne, 80, will be back next season. His partner, Glenn Geffner will return as well. The hard working Geffner fails to clip his words properly and talks too fast. In Florida, based on the empirical on social media and such, the real popular radio team is in Tampa where Dave Wills and Andy Freed team symbiotically and have many fans. Do remember that the Rays have a winning team and made a run in the post season. The Marlins have been pitiful and suffer from poor fan support. For Van Horne, whose pipes are still golden, 2020 will be his 52nd season in the Big Leagues. He will not work a complete 162 game schedule.

Great stuff! I do think Davis is better when he actually does a series of games instead of the one game where he subbed. He and Smoltz are used to working together, but it’s as though Fox said, we’ll even get another guy named Joe! Bob Gibson did color for Vin Scully in the early 1970s on some syndicated radio coverage of the NLCS. It speaks volumes on how baseball operated in those days that it didn’t have a national radio contract for the NLCS, and that NBC even showed some of the games regionally. The night of the earthquake,… Read more »