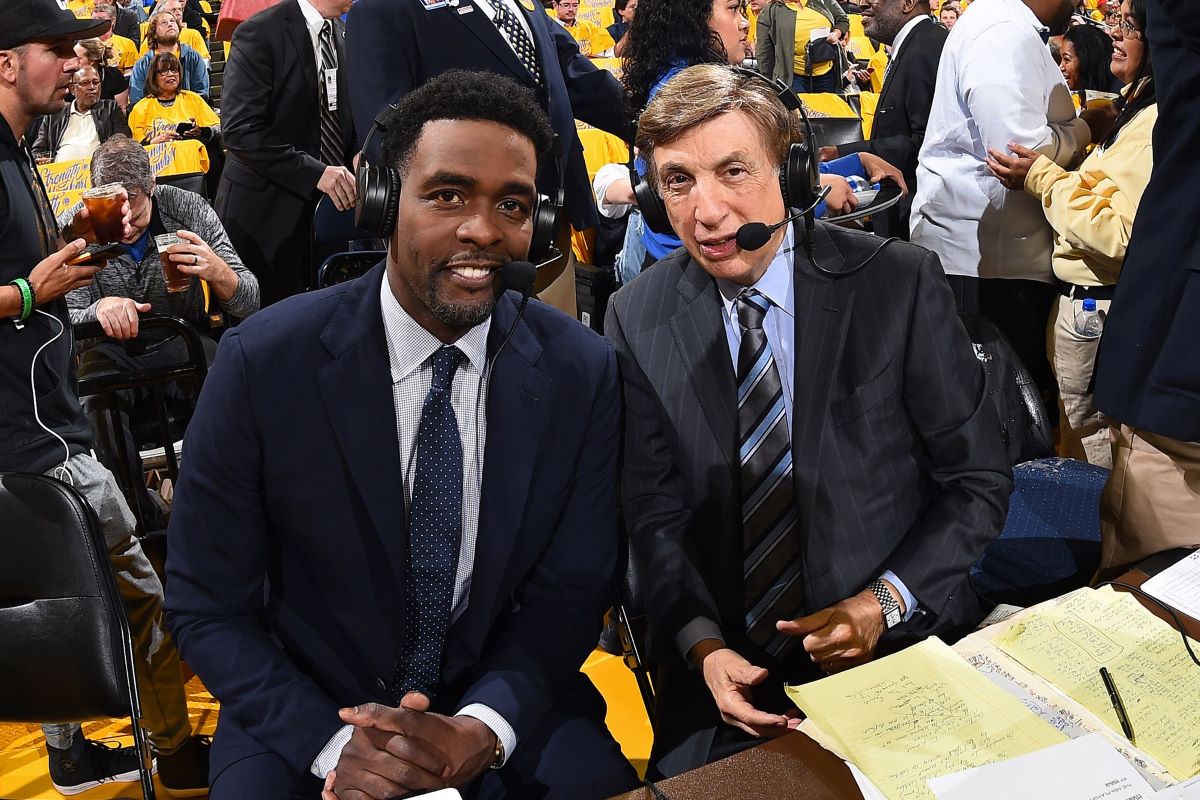 Turner's Marv Albert and Chris Webber are not likely to be back next season.

As reported here earlier, Chris Webber has told friends and colleagues that he thinks his contract won’t be renewed by Turner when his deal ends after the season. Chris is criticized at times on social media for no apparent reasons. Posting on social media doesn’t require substantiation unless your name is Donald Trump. Webber knows the game and works well with partner Marv Albert. If Chris goes, look for Jimmy Jackson to get more reps at Turner. The longtime NBAer, who played for 12 clubs, is real good.

Talking of Marv, this is quite likely his last soirée. While his timbre steadied this year, he hasn’t regained his unwavering focus and vocal precision that highlighted his best years. Working games remotely didn’t help. It’s tough on any announcer, young, middle-aged or old. Marv turns 80 on June 12th.

Don’t believe what you read. This decision is not Marv’s. I believe it will be made for him. All good things must come to an end. Nothing is forever. Whatever happens, Marv will always be NBA, Voice Emeritus.

Nice to see Kenny Albert tapped by Turner to do the NHL. Kenny is passionate about the sport and has earned this lofty role. At 53, Kenny deserves the big seat and he won’t disappoint. When he was born, Marv was in middle of his first official season doing Knicks games on radio. February, 1968 was a good month for the Albert family. Kenny was born on February 2nd, the oldest child of Marv and Benita Albert. Nine days later, the new Madison Square Garden opened, above Penn Station.

It was there, the New Garden, where Marv gained his fame, calling Knicks and Rangers games for decades. Say what you’d like, Marv deserves a banner in the Garden’s rafters. Chick Hearn, Al McCoy and Joe Tait got theirs in the buildings they worked. It’s time for Marv to be honored!

Vin Scully, 93, posted a video wishing Willie Mays a happy 90th birthday. Mays recorded 660 home runs in his glorious career. In Scully’s message, he tells Willie it felt like all of them were hit against the Dodgers.

In 1950, Scully was hired in Brooklyn by Red Barber. Mays was a Giants rookie in 1951. At some point during Willie’s first year in the Polo Grounds, Scully told the audience that Mays was the best centerfielder he’d seen. Years later, Vin told me that Barber criticized him for doing so, telling him in so many words, you just started, who are you to make this judgment. In other words, report the facts. Barber was a taskmaster. Bob Costas used a good word to describe Red, persnickety.

On April 18, 1952, the Dodgers played their home opener against  the Giants. Scully remembered a marvelous catch by Mays at Ebbets Field. “In those days, Ebbets Field had a gravel warning track and a concrete wall. Running as hard as he could, Willie hit that gravel, fully extended, made the catch, hit the base of the concrete wall and rolled over on his back, with his hands together on his chest. The leftfielder for the Giants was Henry Thompson. He ran over, took the ball out of Mays’ glove, held it high in the air, and the out was flashed by the umpire.”

Surprised that Amazon which will continue to have its own set of announcers this NFL season, hasn’t re-upped, at least not yet, Hannah Storm and Andrea Kremer. Is Amazon up to something, long term? Remember that beginning in 2022, it will own Thursday night rights exclusively.

Jim Paschke, who turned 70 last November, is retiring as the television voice of the Milwaukee Bucks after completing the season, his 35th with the team. In the 80s and 90s, Paschke also announced Milwaukee Brewers games on TV. In all, Paschke called more than 2,000 Bucks games. 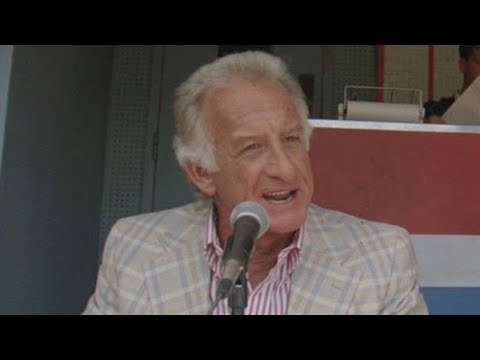 Milwaukee has had some popular broadcasters through the years, none bigger than Bob Uecker, (left) who’s been voicing Brewers radio since 1971. In other words, this is his 51st year! Uecker, 87, is by far the funniest baseball voice ever. In his heyday, Bob would frequently be a guest of Johnny Carson on his highly rated the Tonight Show on NBC.

It’s interesting to note, and Milwaukee is one of the few baseball towns where this could happen, Uecker worked on no more than a handshake for fifty years. During that half-century, the club was first owned by Bud Selig and beginning in 2004 by Mike Attanasio. This year, Uecker signed a contract to qualify for the team’s health insurance plan. As a television performer, Bob starred in the 80’s sitcom Mr. Belvedere. Uecker also did commercial work and famously so for Miller Lite. His insurance with SAG (Screen Actors Guild) was discontinued at the end of 2020. So Bob stopped by the Brewers’ offices around Thanksgiving to sign his first ever broadcast contract with the team. Uecker also was did national games, partnering with Al Michaels on ABC and Bob Costas on NBC.

Talking of Milwaukee, past popular voices there, were Eddie Doucette who presided over the Bucks’ only championship in 1971 and covered the club for years. The team was then led by Lew Alcindor and Oscar Robertson. Another Milwaukee legend was Earl Gillepsie, who was the soundtrack of the Milwaukee Braves in the 1950s and 60s. Yes, Hank Aaron, Eddie Mathews and Warren Spahn. He also did Badgers football for years. The late Jim Irwin, at one point, voiced the Packers, Bucks and Badgers at the same time. Wayne Larrivee on Packers today and Ted Davis on Bucks radio have built their popularity too. Other exceptional broadcasters with Milwaukee roots include Brian Anderson, Merle Harmon, Pat Hughes and UW’s Matt Lepay.

I’m likely missing a few broadcasters here. Sports voices of the Greatest Generation and war heroes: Jack Buck, Cardinals + (Purple Heart Awardee), Jerry Coleman, Padres+ (Marine Corps pilot in WWII and the Korean War), Jack Whitaker, CBS and ABC+ (Decorated vet injured in the Normandy campaign), Bud Lynch, Red Wings (Lost his right arm in combat serving in the Canadian Army) and Johnny Most, Celtics+ (Earned medals as an aerial gunner in 28 combat missions). Jack spoke his mind. In 1996, he introduced Republican presidential candidate, Bob Dole, at a campaign rally. Do that today, and look out for the mob. Son Joe Buck told me that his father wasn’t afraid of many things and added that he didn’t know how his dad would respond to today’s cancel culture. By the way, Dole, who’ll be 98 in July was himself a great war hero who was seriously and permanently injured in the final month of the European theater, April, 1945.

Does Shalise Manza Young who pens angry pieces for Yahoo Sports ever have anything nice to say about anyone? Goodness! If she was available in print, I’d shred her columns to smithereens.

This year’s Derby according to SMW “still ranks as the lowest rated May edition since NBC acquired the rights (dates back to 2001) and the least-watched in 13 years. It averaged more viewers than Thursday’s opening round of the NFL Draft (12.52M), which is not an abnormal occurrence.”

So much great stuff! I’ve heard the story about Vin and Red, and Ernie Harwell mentioned that at one point Vin told him he was really having a tough time. But Vin also has said Red was his second father, and I always found it interesting that he said the broadcast sounded like Red was the father and Connie Desmond the older brother, when Connie actually was about three weeks older than Red was! But Red was “the Old Redhead,” after all. If Jack Buck introduced a candidate today, the question would be whether he was the Jack Buck who… Read more »

To equate Jack Buck introducing Bob Dole — a statesman and fellow WWII veteran — with what passes for Republicans and politics these days is a stretch. And I am sure that many who have been corrected on Twitter and more for wrong information and flat out lies will be glad to know that only one person — an Orange tainted idiot who stained one of the most sacred posts in the world — has been persecuted for it.