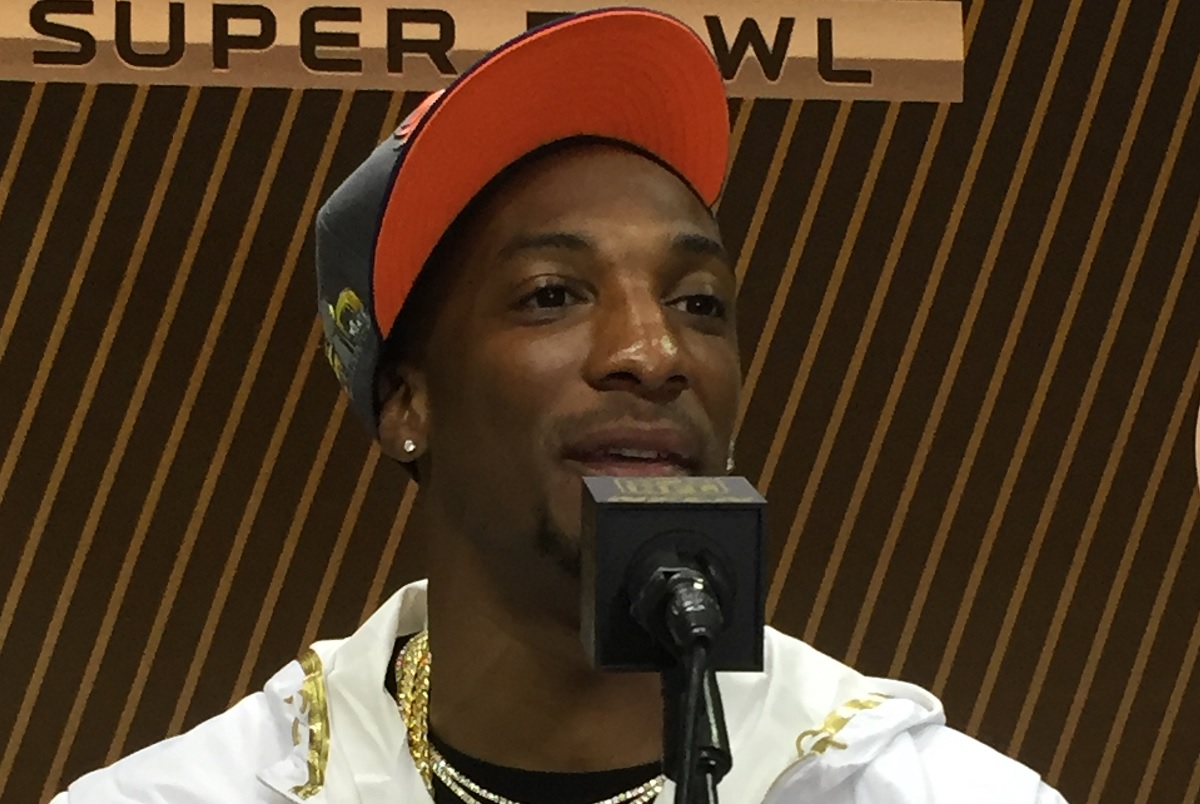 Aqib Talib has been getting good reviews for his couple NFL broadcasts on Fox.

For the college football championship on January 11th, ESPN is again planning a Megacast as it has done in recent years. Audio options of announcers’ local radio broadcasts were among the many features that had lots of enhanced audio and video. Details forthcoming from the network this week. Viewers had a chance to watch the game from different camera angles and more. It made for a fun night no matter your rooting interests.

Its first Megacast of the college title game was in 2014 and the features have been enhanced since.

If Disney gets what it’s shooting for in NFL negotiations, a rotating opportunity to present the Super Bowl, we might see something like it on the telecast of the Big Game. To date, CBS, Fox and NBC have stuck to one production.

On November 30th, ESPN announced that its NFL wild-card telecast will be available across five different Walt Disney Company networks, marking the debut of the MegaCast for an NFL playoff telecast.

The game, which will take place either Jan. 9 or 10, will be broadcast on ESPN, ABC, ESPN2, Freeform and ESPN Deportes.

According to ESPN: “ESPN and ABC will simulcast the traditional game broadcast by the team of Steve Levy, Brian Griese, Lisa Salters and John Parry, while ESPN2 and Freeform will produce their own distinct broadcasts with separate crews and ESPN Deportes will air the Spanish-language telecast.”

Aqib Talib was added to the Fox roster of NFL analysts this season. He’s worked just two games, the second of which was Eagles-Cardinals in Phoenix last week. Two national writers have already heaped praise on Talib. May I add, deservedly so.

Former Boston Globe writer Shalise Manza Young who now pens stories for Yahoo Sports and SI’s Jimmy Traina both like Talib’s confident tone, one scented by his years in the trenches of football and life. Aqib is not the prototype broadcaster who conforms to a list of fundamental standards. He’s not about what’s accepted, how to sound and how to fit in. He just lets it spew from his lips.

Young covered Talib when he played for the Patriots and was impressed by his depth and football insights. There’s nothing contrived about Aqib’s delivery. He’s a product of a Muslim home and a minority community. Talib is distinct. He sounds somewhere between a stand-up raconteur and a challenged gladiator. He is not interested in preparing for present day vernacular to please television executives. The man is his natural self.

Traina maintains that Talib is raw and that is part of his appeal. Washington’s DeAngelo Hall who does the team’s radio reminds me of Talib. Hall too is a bit irreverent. In addition to radio, Hall has done national work for the NFL Network.

Young says, “For decades, we’ve been trained to believe that live sporting events must be broadcast a certain way. Namely, that they should be called and analyzed by an overwhelmingly white, almost exclusively male cadre of voices.”

Writer Shalise maintains that Talib would generally be ignored by potential TV employers as evidenced by the fact that he wore a gaudy suit for his last broadcast. That’s where I differ. Let’s not mix color and flashy suits in here. Talib might grow into a broadcast star but he won’t be the first to succeed who did not embrace convention. How about ESPN’s Stephen A. Smith? He only makes $8 million a year.

A little history too. John Madden introduced the language of the field to viewers and grew into the most popular analyst in the 80s and beyond. There was nothing like him before he arrived. He was different. Tony Romo didn’t come in polished a few years ago. He came in being himself, instinctive; someone who emoted naturally and predicted plays with precision. Neither Madden nor Romo ever sounded stagged. Similarly, the NHL’s Barry Melrose wears tawdry outfits on ESPN. And there is only one Melrose on TV. How about Dick Vitale? He fashioned his own style and has excelled for decades.

Being different and neighborly have worked for decades. Talib brings those elements and more importantly,  solid material. He’s refreshing.

Is there such a shortage of NFL broadcast talent, be it the experienced analysts or those who show promise? While he gets in no one’s way, Fox’ Mark Schlereth has a tendency to spew inanities and share limited insight. In his years in the studio at ESPN, he wasn’t very enlightening either.

On Saturday, after Tom Brady threw one of his four touchdowns against the Lions, Schlereth used the replay to tell the audience to watch Brady rifle the pass to an open receiver. That was it. Nothing more. There was no explanation of how the receiver popped open or how the Lions might have missed an assignment. Schlereth, 54, spent 12 seasons in the NFL as a guard.

As we close out 2020, we’re reminded that 50 years ago Monday Night Football was launched by ABC. Howard Cosell was the dominant personality. He was inflammatory or engaging, depending upon your perspective. One way or the other he helped transform the NFL from a Sunday male afternoon event into a broader prime time audience. The series propelled the league to enormous popularity and America’s number one sport. Hard to believe, still no Howard Cosell in the Pro Football Hall of Fame. Never accepted why.

James Lofton and Andrew Catalon are terrific. Warm, quick and focused on the field. Time for the team to move ahead to 4th on the depth chart, ahead of Greg Gumbel. James thinks like a coach. I always feel like I’m learning something from him. CBS hired a good one in Lofton a couple years ago.

Sam Farber, 37, is the new radio announcer for the Charlotte Hornets. He replaces John Focke who was dismissed after one season following a racist comment that appeared on his Twitter account last August. Focke himself followed Chris Kroeger who himself was removed abruptly late in the 2018-19 season after less than two years. The Hornets never said why Kroeger was removed. Is it a haunted booth?

Farber, who moves to Charlotte from Orange County in California is well aware of the recent rapid successions of Hornets broadcasters. He hopes to involve himself in the Charlotte community and stay in the area for a long time. The San Jose, California native has done play-by-play for ESPN and Fox Sports West.

While the indomitable Al McCoy returns for his 49th season with the Suns, he’ll only do mostly home games. Jon Bloom will call the Suns road games on radio. McCoy is 87. The away games are done from the studio. As long as there are pandemic protocols, team announcers are generally expected not to travel.

On television, Jordan Kent, son of longtime former college coach Ernie Kent, is the new TV play-by-play announcer for the Trail Blazers. He had previously been a studio host for the team’s telecasts. The job opened after veteran Kevin Calabro left rather surprisingly after the pandemic shut down the NBA. Kent did the Blazers games played in the Orlando bubble last summer, calling them from the the Portland studio. Jordan played ball at the University of Oregon. Dad Ernie coached there as well as at Washington State.

Consolidation is the name of the game in Orlando. The team closed down its English and Hispanic radio broadcasts, leaving Dennis Neumann (play-by-play), Richie Adubato  (analyst) and Joey Colon (Hispanic radio) without jobs. The team has gone to a radio/TV simulcast with David Steele (play-by-play) and Jeff Turner (analyst). Interestingly, Steele was the team’s first ever radio announcer when the Magic launched in 1989. I heard a bit of last night’s game against Washington. It appears that the TV announcers do virtually nothing to accommodate the radio audience. The radio broadcast is no more than a TV feed. It was almost impossible to follow the game on radio. It’s too bad because Steele was excellent as a radio only broadcaster in his early years with the team.

The Kings let go of TV play-by-play voice Grant Napear after he said that “all lives matter,” when Doug Christie was on his radio show, discussing Black Lives Matter. Napear was employed by both the Kings and the radio station for which he did the talk show. He was fired by the radio station too. Christie and Napear worked the games together on Kings’ telecasts. ESPN’s Mark Jones becomes the team’s lead play-by-play announcers. He’ll have a schedule of missed games due to his commitment to ESPN. Kyle Draper will do the games that Jones misses. Draper did pre and post for the Celtics.

In Los Angeles, Chauncey Billups moves from the broadcast table to the bench as an assistant with the Clippers. Jim Jackson, former Ohio State player who also was on 12 NBA rosters will be the prime color announcer on Clippers telecasts.

With the death of Tommy Heinsohn, Brian Scalabriane becomes the new fulltime analyst for the Celtics’ telecasts.

Talking 50 years ago, the big network voices then were Jim McKay, Jack Whitaker, Curt Gowdy, Ray Scott, Chris Schenkel and Howard Cosell. Frank Gifford, Al Michaels, Pat Summerall, Dick Enberg, Don Criqui and Keith Jackson would be names that would grow in popularity in the 70s and 80s. In 1970, the NBA finals were just being televised in their entirety. The NHL on network TV was hardly an afterthought. ESPN wouldn’t be born for another nine years.

What great stuff! First, shame on the Orlando Magic, not just for getting rid of announcers, but thinking a TV call works on radio. One of the problems with, for example, ESPN Radio’s coverage of baseball has been that some of the TV people doing the playoffs don’t have the radio training and thus the descriptive abilities needed. The Lakers did the simulcast forever and Chick Hearn barely cared about the camera, though he would say stuff for the TV audience–but he was thorough. That inspired the Dodgers to have Vin Scully simulcast the first two and then the first… Read more »