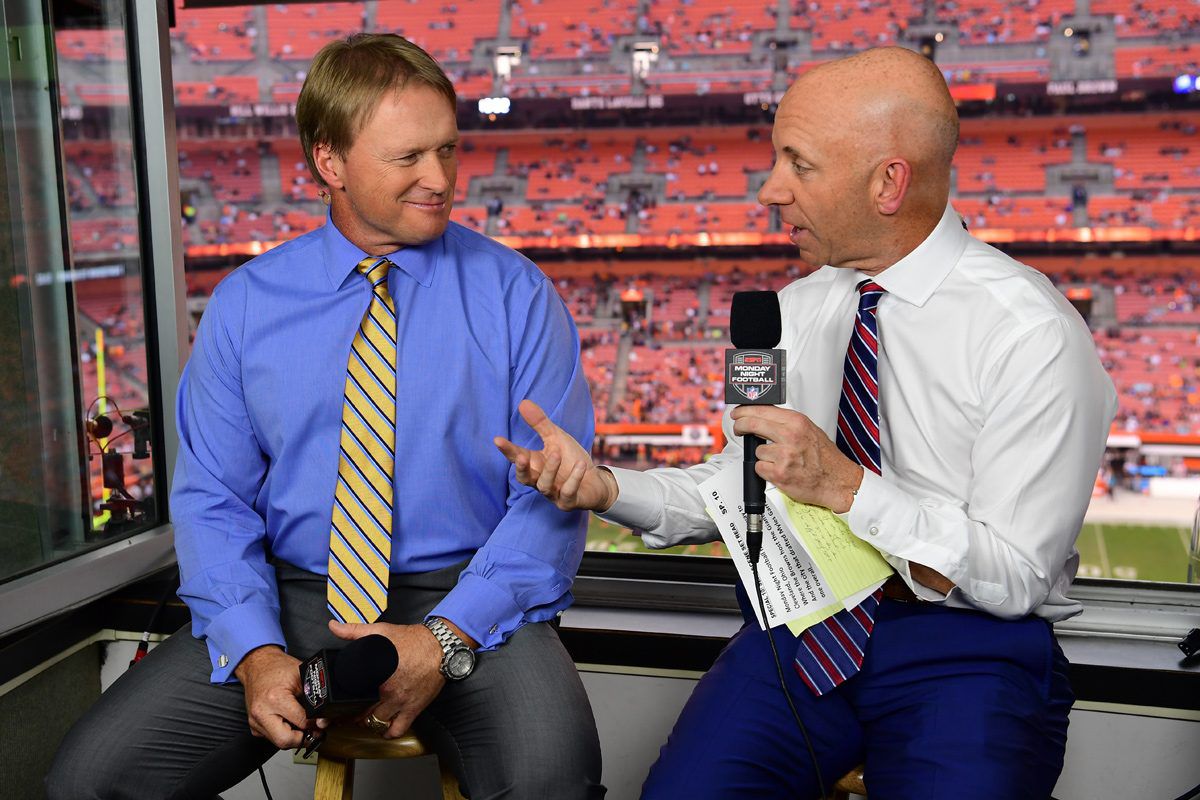 Sean McDonough (r) and Jon Gruden when the two called MNF. Gruden is now on Oakland sideline and McDonough transitioned smoothly back to the college game

The thick of the season is behind us. The conference championships, Army-Navy and bowl season ahead. ESPN’s press release yesterday stated that it ran 1,000 + college football games this season. Quick ranking of the network’s best play-by-play announcers. 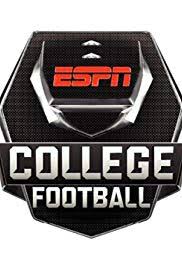 Can write the textbook on technique, from use of voice, to proper breathing, annunciation, inflection, pausing and delivering the punchline. They don’t get better. He and Todd Blackledge are the best football duo on ESPN

Magnificent command, cadenced rhythm, disarming boyish face, works comfortably with any partner no matter who he’s assigned. This fellow can pop out of a deep sleep and present a sport flawlessly; baseball, football or basketball

There are more versatile broadcasters on the ESPN roster than at any network because ESPN fills 24/7 of programming, a wide range of play-by-play and studio shows. Levy is one of the few who can step in and do just about anything. He does it all with a Warner Wolf like big smile. Viewers want positive reinforcement from their sports announcers. Last time I looked, sports are an escape. They’re not the McCarthy hearings

Love his calm demeanor, pleasantness on the mic, his sprinkling of anecdotes and occasional opinions. Never sounds scripted and no one on this list has a better command of the language. Mark says that his grandfather was an English professor who underscored the use of quality language by his grand-kids

Intense, prepared, different, neighborly, distinct, knows rules and sees more of the field than just the line of scrimmage, An immediately identifiable voice. Not afraid to emote. Never stiff

Reliable, seasoned, silky smooth and ready. Dave clips his words nicely, doesn’t overtalk and never gets in the way of the game. There’s a good reason that he’s also the radio voice of the Arizona Cardinals and that ESPN assigns him college basketball and NBA games

(7) Chris Fowler– Studio man at heart and very good at it. It’s hard to go wrong though when you’re dealt the best game on the Saturday card. Fowler has gotten better every year but for those who remember the golden standard of strong personality, Brent Musburger, Fowler isn’t there yet

Making his way up the depth chart. Works with aplomb in the booth, moves nimbly from baseball to football, to basketball and more. Comes quietly and goes quietly. Chicago Bulls now use him in fill-in television role, an unofficial audition for the permanent job when longtime voice Neil Funk completes his NBA career at season’s end

A true craftsman who sounds older than his 36 years. Another of the versatile group. Does White Sox baseball on TV. Quite a story, but forget the stories. Although he suffers from cerebral palsy, he clawed through the trenches and more, Syracuse Chiefs, minor league baseball plus lower level college basketball. Get this. He also earned his law degree at Wake Forest.

Son of late and legendary Woody Durham, beloved Voice of the UNC Heels. His conversational style is welcoming as is his warm southern drawl. His timbre fills a room and he delivers a commanding sound. Durham’s one of three on the list who also work Sundays, calling Falcons. Wischusen does Jets on radio and Pasch, the Cardinals

He’s quick on the curve. Another great pro who’s acclimating to his lofty new football role, lead voice of the ACC Network (managed by ESPN). A good baseball man, O’Brien can spin a yarn and fit it into a football broadcast seamlessly. As solid as they come

Deninger is more than an academician. He spent 25 years at ESPN producing live sports television from six continents and across the United States.

Many of us hear Syracuse University and it triggers thoughts of Newhouse and all the wonderfully successful broadcasters who were schooled there. Falk, named in honor of the innovative, pioneering and wildly successful sports agent David Falk has an exceptional curriculum that trains future sports administrators, managers, marketers and organizational leaders.

Vin Scully always strove to economize his radio call without sacrificing an iota of the word picture. Reviewing a play: “It deflected off Carlton half way to first, Steve chased it down and threw him out.” So simple, yet so picturesque.

Marv Albert was wonderful on hockey radio. He did Rangers games from 1965-1994 when the Broadway Blues finally won the cup. Yes, Marv missed a ton of the broadcasts in those years because of other commitments. But in the early years including some promising seasons in the early 70s, those radio broadcasts were quite popular. The outer boroughs of New York didn’t have any cable and Marv was the prime source for rabid Rangers fans. He deserves consideration for the Foster Hewitt Award, given by the Hockey Hall of Fame

Year later in 2005, Sal Messina, who did color on Rangers radio was honored. But no Rangers radio play-by-play voice, (Bert Lee, Win Elliot, Marv Albert, Howie Rose and Kenny Albert) has ever been given the award. In time, I’m confident Kenny will make the cut. Don’t know how the committee ranks Marv. Ask most New York hockey fans and they’ll tell you Marv belongs.

Chick Hearn lost out to Jack Buck in 1954, pursuing the Cardinals job, alongside Harry Caray and Milo Hamilton. Buck would rib Bob Murphy, the longtime Mets announcer who too started in ’54 as a Red Sox sidekick to Curt Gowdy. Jack would tell the Oklahoman Murphy, ‘You beat me for the Red Sox job.’ Buck had grown up in New England listening to Fred Hoey.  He was hoping to get the Red Sox gig.

Different times, different world. Vin Scully told Tom Hoffarth of the Los Angeles Times that when he interviewed under Branch Rickey in 1950, the Brooklyn boss asked Vin if he was married. Can you imagine anyone doing so today in a world of political correctness? Rickey was a deeply religious man. Scully was still single then.

Pat just produced a dandy, profiling Bob Costas. It runs 77 minutes. I listened and couldn’t shut it off. The CD includes some of Bob’s World Series calls in the 90s, mesmerizing interviews, including one with Barber and an his unforgettable eulogy at Mickey Mantle’s funeral. A cute footnote: Pat’s daughter Janell is the cover artist. Nice job.

I’ve never been a fan of TV analysts who continually complete their comments with a question for their play-by-player. Once in a while, it’s understandable. Given all the graphics, breaks, commercial and promotional drop-ins, the play-by-play voices need opportunities of their own to add info, profile a subject or weave in anecdotes. The windows between plays are too tight. You see more of it on basketball. Frankly, it can be annoying.

Oh, so much here! First, as a Dodger fan in Las Vegas, I’m not sure why I get Giants TV but not Dodgers. Between that and ESPN and radio, I’ve gotten to hear a fair amount of Dave Flemming’s work and he is the real deal. The Giants are blessed that he is happy to be in the Bay Area and literally the #3 play-by-play man in their group. I finally ended up calling Pat Hughes for a CD as a gift for a friend. I never got to call because his newest CD is always on my Christmas list.… Read more »