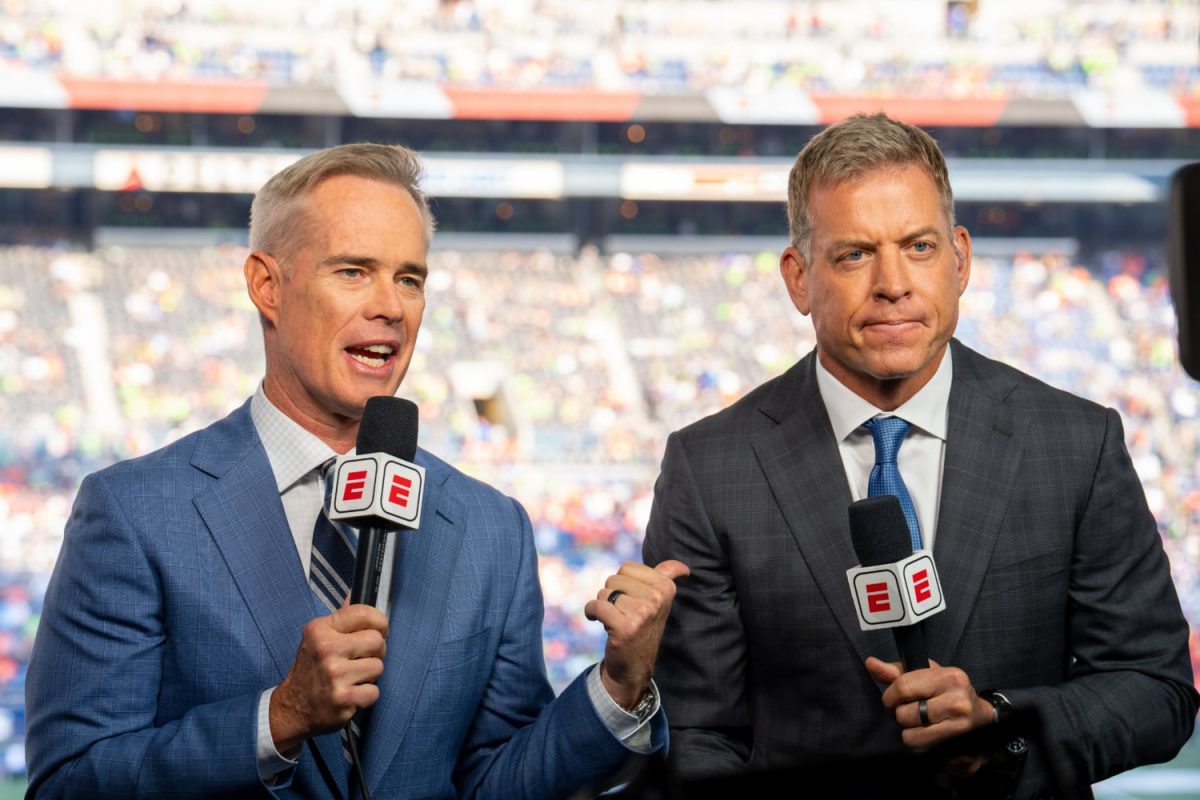 Network TV voices – It’s been good watching the Monday night NFL games on ESPN. Joe Buck and Troy Aikman are getting well fed for their Monday Night efforts on ESPN. They pushed the market to what it would bear. You can’t blame them for doing so. But it triggered a ridiculous amount of dough to be offered to the names. I was distracted, noting too when Lisa Salters and Suzy Kolber, both gracious, must have been proud partnering in their hometown, Philadelphia, holding NFL microphones. Living a dream. Kolber resides in Connecticut near ESPN headquarters with a daughter, Salters in Baltimore with a child too.

He was born in Ecuador  started in the United States as Jaime Jarrin. I’ve often wondered about  Jarrin’s real age. He started in 1959 and grew into the forever Hispanic-Voice of the the Dodgers. It is said that he did about 4,000 Dodgers’ Hispanic broadcasts in his long career. He retired at the end of past 2022 Dodgers’ season.

In Jaime’s early years, it was his strong voice, growing knowledge of the game, and informal tutorials with Vin Scully that made him so popular with Hispanic-speaking fans in Southern California. His home-run call was: “Se va, se va — y despídale con un beso!” In English, it would translate to “It’s going, it’s going — kiss it goodbye!” Russ Hodges, the Giants’ voice would spew, “Kiss it goodbye” when the club was at the Polo Grounds in New York and he took the phrase with him to San Francisco in 1958.

Jarrin’s bio says he was born, December 10, 1935, making him 87 in a couple weeks. But son Jorge joined his dad in 2012 and partnered with him on-air. The son retired, yes retired, at roughly the same time as the father. I found Jorge listed as born in 1953. If that’s the case, dad Jaime was 18 when son Jorge was born. So something doesn’t add up. Many have thought that Jaime is older than 87. Anyhow, who cares? Jaime sounded great and was beloved in Southern California as a baseball announcer.

Jeff Joniak has come a long way – speedy and entertaining

Chicago Bears voice Jeff Joniak and color commentator Tom Thayer are likely moving to ESPN 1000 Radio, now that the station has acquired the rights, beginning next season 2023. The station, like the one they’re on now, WBBM are AM 50,000-watters. Jeff brings a spirited call to the booth, going a mile a minute. He’s been with the Bears since 2000, making it his 23d year with the club. His rhythm, speed of speech, annunciation and tone remind me of Greg Papa, the 49ers announcer. On other note. I have never heard more commercials on a radio football broadcast, using every potential commercial opportunity to run an ad or drop in a spot.

Merrill Reese maintains his vigor through the Eagles’ surprisingly excellent season. Ever since the death of the Phillies’ lovable Harry Kalas in 2009, Merrill has easily become Philadelphia’s top sportscaster. Reese is also the longest tenured voice in the NFL. Reese began with the club in 1977. Still sharp at age 80, Merrill is in his 47th year, and has never missed a broadcast. Remarkable! He also owns a suburban radio station, outside Philly. There was a time he did Big Five basketball too. He can do hoops and do so with gusto.

Dave Logan, 68, Voice of the Denver Broncos, has eight years on left on his play-by-play contract. It seems like he’s forever been the team’s radio announcer. The rightsholder, KOA, must have lots of confidence in his role as announcer as well his long-term health.

When he called the Broncos game in London earlier this season, he pretty much admitted that they were sitting in the stands. They also admitted that they had a long night out, boozing the night before. Logan is quite different, very unconventional.

Dave’s unique approach is a combination of describing the game and assessing the club. He does both. Rick Lewis sits besides him contributing minimally. Logan is so well embraced by Rockies’ fans that after his numerical mistakes are immediately forgiven right after he corrects them. During the broadcast, the  engineer fell because space was tight. No question the partnering voices were  hardly rhythmic, more so, slob-happy

Matt Barrie should make up his mind. Play-by-play or studio host? I find him better in the studio. Not bad at all calling games but it isn’t his strength. His timber is a little thin and he hasn’t yet developed his rhythm.  Partner Louis Riddick understands football. No question. He breaks down players nicely, from every facet imaginable. I’m not sure that the game booth is his best fit. Riddick is efficient in that role, yet he still deserves a shot in the NFL executive suite, a lofty position he’d prefer to have.

One who deserves a bigger opportunity is Wes Durham. He know his broadcast stuff, having growing up under his father’s roof, Woody Durham, Voice of the Tar Heels. Pop began with Carolina in 1972. Wes heard lots as a kid and knew what he wanted to be as an adult, a play-by-player. Wes got into the ACC with Georgia Tech, doing football and basketball. ESPN came along with college football. Living in Atlanta, Wes drew the attention of the NFL’s Falcons. Woody was an icon on the UNC campus, working football and basketball for 40 years, including 4 NCAA championships

Robert Griffin III is a bit of a character. It’s hard to predict where he’s going next, what he’ll cover next. Robert follows a free-style that makes him a little different.

Matt Millen’s style and depth: At 64, he’s back almost every week, mostly on college, occasionally on the NFL. There was a time about 25 ago when he was among the top tier at Fox and a top analyst of Westwood One’s Monday Night football radio broadcasts. Glad to see him back in the swing of things. A national story a couple years ago, I believe in SI, said that he doesn’t like to wear a seat belt when driving. Unrelated but shortsighted on his part.

He was also on a brink of death with a failing heart. On-air, the former Penn State and NFL linebacker introduced that rough, uninhibited sound on-air; non-contriving, unafraid, just what you’d expect from a bulky linebacker, doing color on Fox. Truth is that Matt’s a good man. Breaking down college football is keeping him busy and inspired. And maybe alive.

I heard James Worthy on a TV podcast recently, talking about Coach John Wooden. He told the audience that the Wizard of Westwood insisted that freshmen attend church each Sunday unless excused by their parents. Try that today coach.