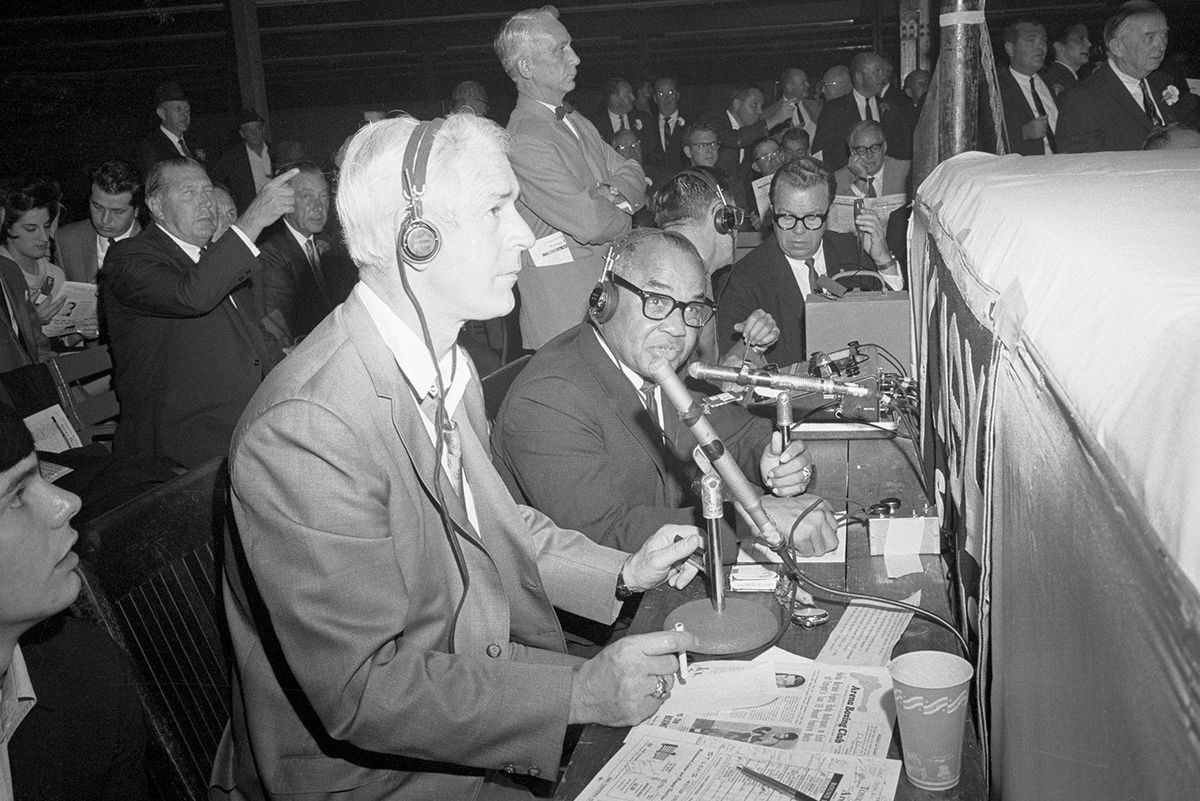 The versatile Jack Buck could do just about any broadcast work. He and son Joe are best ever father-son network sports duo

Would you agree? The best-ever father and son network television duo (not local e.g. Marty -local- and Thom Brennaman – network):

Changes for Marlins Radio next season?

Reports in Miami this past winter by longtime radio sports talkie Andy Slater indicated that Marlins radio announcers Dave Van Horne and Glenn Geffner were asked to take a salary cut and to cut down on the number of games they broadcast. When the report surfaced, there was no measurable groundswell of fan support for the two broadcasters. Both men eventually came to terms with the team.

The Marlins current contract with their flagship WINZ apparently expires at the end of the season. Van Horne turns 80 in August and Geffner has been criticized for poor fundamentals. Earlier in his career, Geffner left Red Sox and Padres radio jobs.

Other baseball announcers 80 or older are Bob Uecker, 85, John Sterling , 81 and Mike Shannon, 80. Neither now works an entire schedule. Barry Jackson of the Miami Herald noted in an earlier piece that Dave is missing 20 games this season. It sounds like the cut back could have been against Van Horne’s wishes.

If Van Horne is asked back, he will likely face a reduced schedule again.

Did you know that in 1950, Baltimore sportscasting institution Vince Bagli was broadcasting Navy basketball on radio? After the game, a young fellow at the Fieldhouse, doing the Navy game on TV asked Bagli for a ride to the train station. Bagli gladly obliged. The gentlemen was 22 year old Vin Scully. Last year, Bagli told me that it was the only time he ever met Scully and he’ll never forget it.

Yankees’ 31 season radio man John Sterling has been taking some time off. I didn’t hear Ryan Ruocco fill in on radio but I do know that he’s done television games too, pitching in for the recuperating Michael Kay on Yankees TV. Ryan has gotten some good reviews from the New York media critics.

I did hear Chris Carrino, the Nets basketball announcer do one Yankee game while Sterling took a night off. Chris’ pacing, voice inflection, description and command were superb. His intonations, his unhesitating present-tense call was relaxed and right out of the Red Barber textbook. Chris sounded like a veteran who’s done baseball his whole life.

Meanwhile, a couple broadcasters are carping about the fact that the Yankees aren’t reaching into their farm system to find a fill in for Sterling. Agreed. They too deserve a shot to audition their wares when Sterling takes time off.

According to a first half analysis of Nielsen data by Sports Business Journal:

Ratings for 15 MLB teams are down, San Francisco and Texas, each – 31%. And despite their continuing success, the Yankees surprisingly – 26%

Train to be a lawyer and become a sports announcer:

Broadcasters through the years who also had legal educations, some of whom also practiced, are :

Readers of the publication (and hordes of other fans) are familiar with the multi-talented Ken Levine, a former MLB play-by-player and gifted comedy writer whose credits include Cheers and M.A.S.H.

On his Hollywood & Levine podcast, the writer interviews legendary sitcom director Jim Burrows, whose work spans many decades of pop culture classics and heavy hitters such as Friends, Will & Grace and Cheers. Ken calls Jim the Babe Ruth and Cal Ripken of comedy directing, given the fact that the 78 year old has stamped 1,000 episodes of various sitcoms.

The two-parter is linked above.  In part two,  Burrows shares some behind the scenes stories about working with the Friends cast, and takes listeners through the up and down process of directing a live sitcom.

NBA fans know the name Steve Javie, a long time referee. Steve now does commentary for ESPN, chiming in when there are rule interpretations or complex calls.

Interesting piece on Steve linked below. Last month, he was ordained a permanent deacon in the Catholic Church, serving in the Philadelphia Archdiocese. It’s a goal he set out to accomplish some 30 years ago. Now retired, he’s reached it. Javie is shortened for Jaworowski. He comes from a strong Catholic family. His uncle Msgr. Anthony was one of the most respected priests in the Philadelphia area. You might not know that Steve’s dad, Stan Javie was an NFL football referee who worked four Super Bowls.

Larry Baer, the Giants CEO , did the radio broadcasts for the Oakland A’s in 1978?

GREAT stuff! Certainly, at the network level, Jack and Joe have to be #1. I suspect some people would argue that, overall, it might be Harry and Skip? I also think of Marv’s line about doing everything for so many years, and then he was cutting back and had some time off and called Kenny about dinner. Kenny replied, “Not tonight, Dad, I have a game.” Marv said he was so proud of that. One more broadcaster who went to law school: Jim Britt, who did Boston and then Cleveland games and some network work in the 1940s and 1950s.… Read more »

Thank you Michael. Neil Price, Miss. State broadcaster adds the name of the late John Ward- as one who had a legal background. Ward was the Voice of T of Tennessee. He worked basketball alone, no analyst. Was beloved by Vols’ fans. Ward also owned a successful ad agency. Late in life was a school benefactor and made a sizable donation to the school.

If I’m not mistaken, I believe Al Wisk (Rams, Royals, Angels) also was a lawyer.

How would Harry and Skip Caray be classified? Local, I suppose although both were somewhat national too.

Vin’s only other job besides the Dodgers was at WTOP Radio in DC in summer of ‘49 into the winter of ‘50.. which would explain how he and the great Vince Bagli would cross paths.

The vastly underrated Dewayne Staats should be next year’s Frick winner.