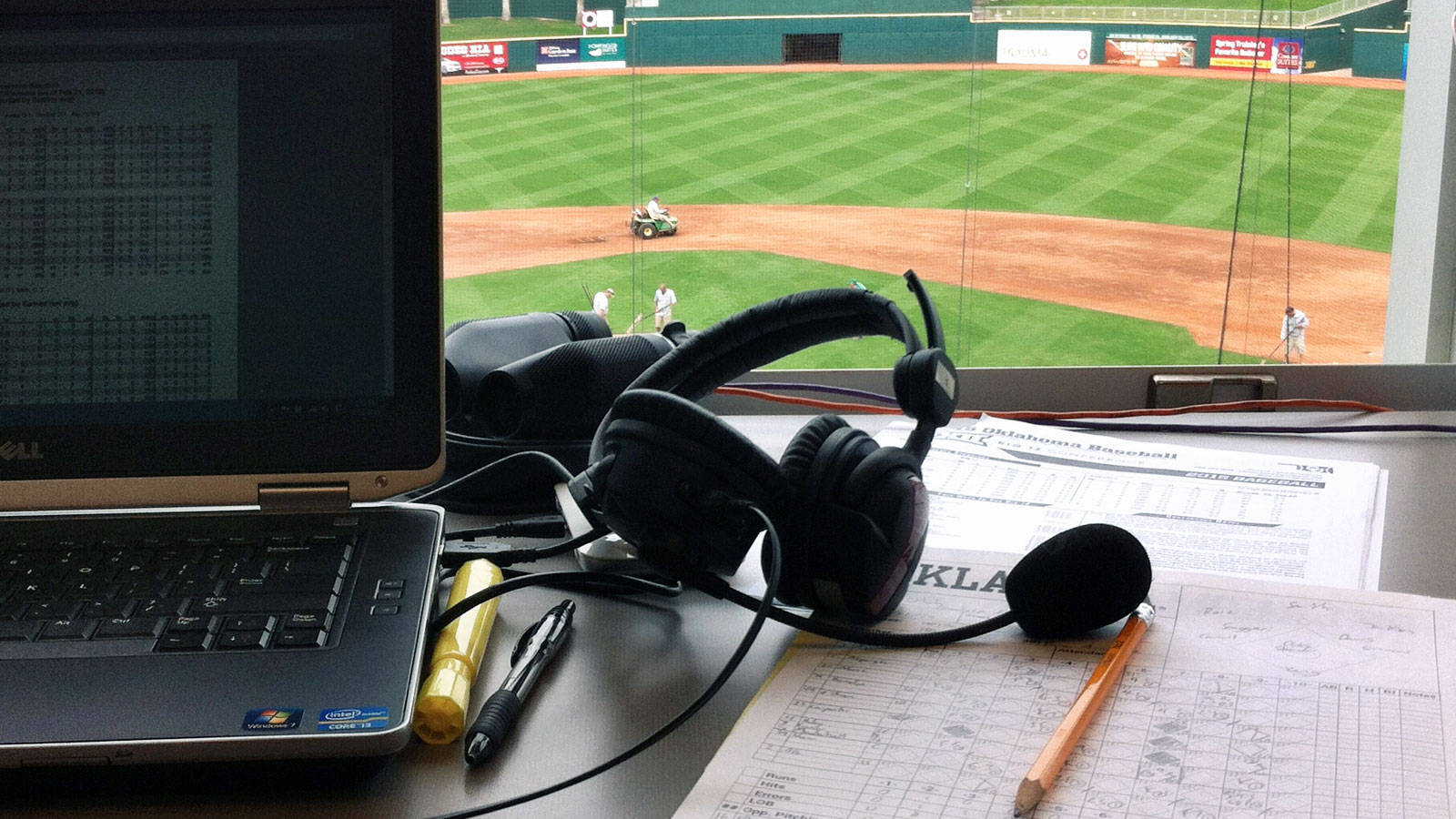 Many are still raving over the magnificent Cooperstown address by Bob Costas, the star-studded broadcaster. Howie Rose, the Mets radio broadcaster, said “Best extemporaneous speaker in the business!”  Former ESPNer and current Giants announcer Jon Miller, a Frick winner himself, was effusive in his praise:

“Wow! Bob’s speech was dazzling in its elegance but also his humility. He crafted the speech around the accomplishments of others—his partners, co-workers, players, managers and Hall of Famers—while only mentioning himself as a way to illustrate the great achievements of all these others.

“Truly an icon of our business in every sport with which he’s been involved, Bob’s Cooperstown acceptance speech stands as a beacon of the storyteller’s art for which baseball broadcasting at its finest has always been known.”

Getting older and hanging up the mic

The piece on Bill Brown who retired from his fulltime duties with the Astros in 2016 after 30 years, drew quite a bit of attention on social media. It proves that while Brownie was appreciated when he was in the the booth, people are often not missed until they’re gone. Bill is enjoying his retirement and doing some work here and there for the Astros. He says he left when he felt his passion was tempered a bit by the advancing of time. He left on his own terms and before fans murmured that he wasn’t cutting it anymore. See story Bill Brown’s departure from Astros

In interviewing Brown, I learned that he was shipped to war-torn Vietnam after college; yet was assigned to report sports for our troops over Armed Forces Radio and Television. He had no orders to fight in the unwinnable trenches of the Vietnamese jungles. It reminded me of Mel Allen and Lindsey Nelson, whose military duties too during World War II involved communication and public relations.

Herb Carneal, a five decades Twins broadcaster, didn’t begin slowing down until he was in his 70s. The late Carneal summarized his thoughts: “Sometimes I say, ‘What’s an old man like me doing here announcing a kid’s game?’ But I’ll get a letter from someone saying how much they look forward to hearing the games on the air. That’s one of the things that makes me keep going.”

Alex Trebek who’s hosted the show for 34 years has apparently (per TMZ) suggested that Alex Faust, Voice of The LA Kings,  (whom our writer Dan Mason profiled, Alex Faust, Vocie of LA Kings, succeeded legendary announcer Bob Miller) replace him when he retires. Trebek, 78, is Canadian-American and apparently watches the Kings. Trebek is involved in the production of the show and his endorsement will merit consideration.

If this eventuates, Faust won’t be the first man to move from the hockey broadcast booth to hosting a game show. The popular Monty Hall did radio color for the Rangers radio broadcasts in the 1950s before hosting “Let’s Make a Deal.”

The enigmatic and enormously talented former shortstop Garry Templeton (Cardinals/Padres) was selected to the National League All-Star team in 1979 as a reserve. When he was notified, it was reported that his response was, “If I ain’t startin, I ain’t departin.” Templeton became famous for the quote. It was later learned though that the refrain was actually expressed by Cards’ voice, Jack Buck who paraphrased – in his game coverage – Templeton’s trenchant response.

Two Legends – The world then and the world today

In a 1950 Brooklyn Dodgers broadcast, Red Barber called the at-bat of Henry (Hank) Thompson who was with the Giants. Barber profiled Thompson, “the first negro to play for the Polo Grounders.” Thompson was a sad story. After his playing days, he drove a cab in New York, then served time in Texas for armed robbery. After being paroled, he died following a seizure in 1969. Thompson was 43.

Frank Ernaga spent parts of a couple seasons with the Cubs. He played in all of 29 games. That was it. During the 1957 season, there must have been a misprint of Ernaga’s age. Vin Scully, calling a Cubs-Brooklyn Dodgers game said, “Good thing Ernaga wasn’t a girl because he would have been upset about the age that they first announced about him. They said he was 37. He’s 26.”

It was fine then. Do that today and unfortunately you’re lambasted, even Scully, the fairest, most brilliant and most unbiased man on air. Compliment a middle-age woman today for having a ‘girlish figure’ and you’ll be open to criticism. Back then too, smoking cigarettes virtually anywhere was permitted, except on the New York subway. 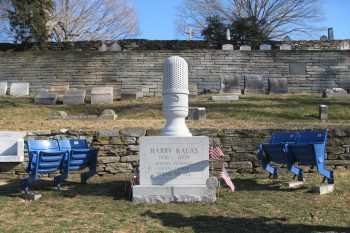 Fascinated by gravesites and the stories of those interred there, longtime broadcast sales executive Vince Gardino and his brother Robert are writing a book titled, I Am Telling You That He Is Right Over There! Vince tells me that the beloved Phillies’ broadcaster, Harry Kalas was laid to rest in Laurel Hill Cemetery outside Philadelphia. Above the inscription is a tall stone depiction of an early generation studio mic. The book, published by Temple University Press, is scheduled for release in Spring ’19. Vince says, “Harry’s grave has 4 seats from old Veterans Stadium that are placed alongside the tombstone so folks can sit and take in the river view.”

Lowell Perry was the first African-American to broadcast a football game nationally. He was an analyst for CBS Television’s NFL coverage in 1966. Perry played at Michigan and had an injury shortened career with the Pittsburgh Steelers.

Where are they now?

Gene Peterson, the popular radio voice of the Houston Rockets for 33 seasons, left after the 2008 season. I caught up with him recently. He told me that he retired from the NBA after his vision weakened and just when radio announcers were being moved off the floor to the impossible rafters. Hot Rod Hundley left the Utah Jazz for the same reason, pushed from decent vantage points to those with impaired views. Now 77 and in otherwise good health. Gene is enjoying his children and grandchildren. He and his wife have been married for 55 years. Peterson gave up the links last year because of his vision limitations. In his day, Gene was a scratch golfer.

Mel Proctor, 72 this past Saturday, was a prominent broadcaster for the Washington Wizards and Baltimore Orioles. He went out West to call San Diego Padres games. He hasn’t worked steadily on-air in many years, yet does training and writing. Mel’s penned several books including, I love the work, but I hate the business. The last couple of years Proctor did some backup radio baseball for the University of Hawaii team when it played on the mainland.

I was at the Bears-Pats 1986 Super Bowl in New Orleans. My college friend, Ed Rogan from Chicago, was in the Mayo Clinic in Rochester, Minn. The major Bears fan told me by phone that the medical staff couldn’t determine what was ailing him, that he could die if they didn’t learn his ailment.

When I was done with my last column for the week, Thursday before the Super Bowl, I called Ed in his room to urge him to somehow get to see his Bears in their only Super Bowl at the time.

So while I was speaking to him from a phone in the famous Pat O’Brien’s bar I made this up: ‘’Paul Hornung. He just walked by me. Many big names here.’’

The next day I got a call from Ed. He had just landed at an airport near New Orleans and was going to take a cab to the city. When he arrived, I asked him how he was able to get out of the Mayo Clinic. He said, ‘’They told me my problem was the bubbling in my stomach caused by beer. ‘Drink wine.’ ”