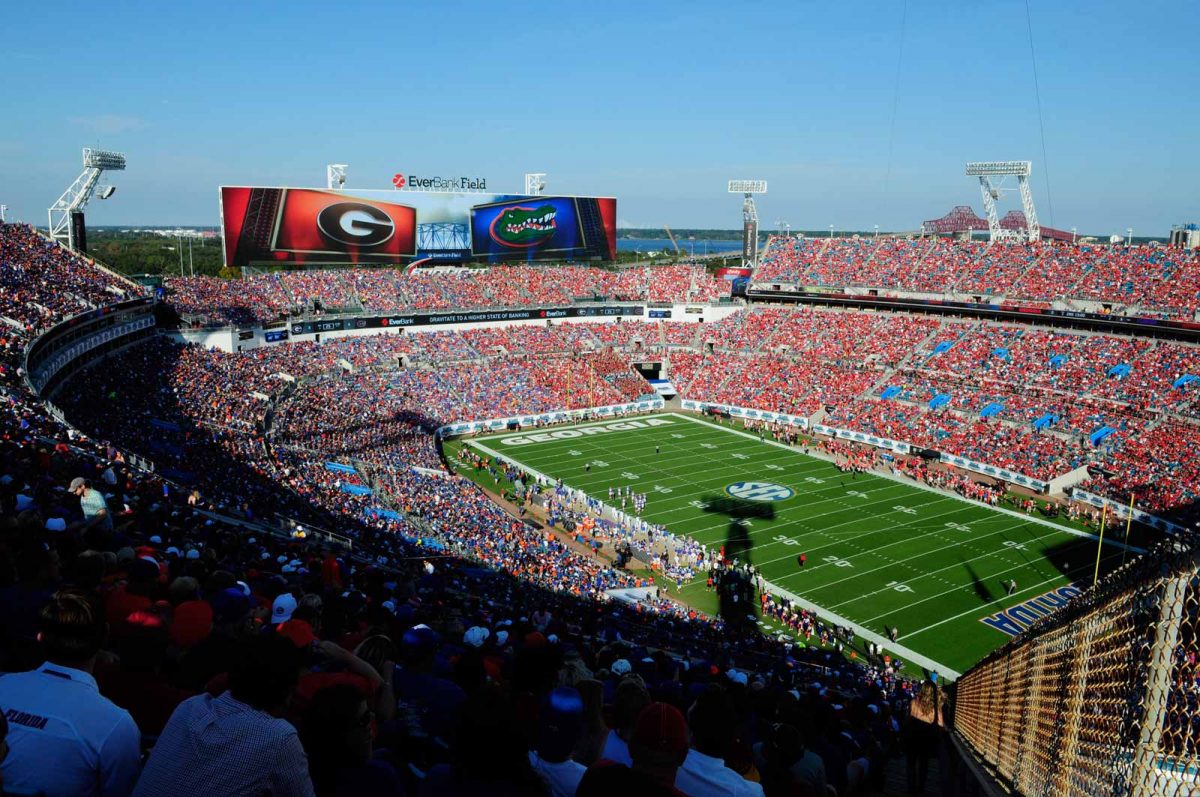 #6 Gators and #8 Bulldogs are at it again in Jacksonville

A rough stretch for Florida:

Last week, the biggest broadcast sports personality in town passed-away. Hank Goldberg, loved by most, disliked by some, hit the trifecta! He was born on a holiday and died on the real one, July 4th. Hank and former radio superstar Neil Rodgers are missed. Stations WQAM and WIOD Radio meant so much more to the markets when those two characters spewed quipped and quibbled.

Mick Hubert retired. He had called Gators’ games since 1989. At that point, David Steele left for the Magic and Hubert was hired in Gainesville. Florida State too and the University of Florida are losing their football and basketball voices for the coming season and beyond. That made it 33 years for Mick. He always provided a clear picture of the game, no matter basketball or football. He can do an NBA game as well as anyone today.

He’s well prepared and maintains his timbre. Hubert liked mimicking expressions of other popular announcers, infusing them into his own broadcasts. The “Oh My!” was Dick Enberg’s and the ‘ugh-ugh” of the late Bulls’ announcer Jim Durham. When an attempted field goal failed, Mick, 67, would use this expression. Always a gentleman, best of luck to him.

Deckerhoff is not fully retiring, yet not moving out either. After 47 years at Florida State, Gene will retain his Bucs’ gig. Most folks, based on my unscientific survey, pit Gene the number one football play-by-player in the Sunshine State. He says “we” but it’s an honest, “we.” Geno is a man in command. But do remember that the Seminoles have 33,000 students and University of Florida, 52,000.

What I’ve always appreciated about Gene is that when he’s on top of his game is you’ll never guess the score and which team leads. There’s undying energy in Deckerhoff’s. Last season, when both Seminoles’ hoops and football did poorly, Gene brings enormous energy to the radio. Funny, he doesn’t like admitting it, but Gene is a Gator by graduation.

For an interview a few years ago I asked Gene which program he’d leave more willingly, Nols’ or Bucs? “I won’t play Solomon.” At his age, he’s still simulating in Tampa with the Bucs.

Now it’s the new voices. I hope this fellow Sean Kelley will do well in Florida. He struck me as a little sloppy. But he didn’t over-impress me initially. He keeps getting better and isn’t as stiff as he was a few years ago. I also think he’ll likely be a little be more steady lipped. In New Orleans where he called Tulane and later the Pelicans, he served on the area fire reserve in his neighborhood. He’s worked too for ESPN Radio.

The Seminoles have a new voice. Florida State announced Monday that Jeff Culhane will serve as the voice for its football and men’s basketball teams. He replaces longtime vet Deckerhoff, who retired after Florida State’s spring football game in April. It will be a challenge to follow Gene. Jeff sounds well spoken and confident. He’s from Fargo, South Dakota and has gotten some good suggestion from one of the sharpest and versatile voices, Sean McDonough. Jeff called North Dakota State University Football and Basketball.

In the summer, South Florida can be cruel. Don’t expect the oppression to whittle down here in Miami/Fort Lauderdale. The good news is that during the summer it rarely gets above 92 degrees. The bad news is that it rarely gets below it. The humidity is terribly draining and remains as such, relentlessly until November.

I often wonder why the humidity in Southern California is contained but not here in South Florida. So I asked a meteorologist who explained it. On the West Coast, the water flows north to south, bringing with it cooler water flow and more tolerant elements, fewer clouds and less humidity. The weather pattern in the Atlantic is reversed, water flowing from the murkier south and emanating from the Caribbean.

Comparing the coasts, the Pacific is deeper than the Atlantic. stirring more rain and humidity,

It’s also why, it’s very rare for rainouts of baseball in Southern California. The Angels, Dodgers and Padres don’t have to worry too much about the wet stuff.

Things I found out while looking for something else:

In the 1970s, Jim Hartz was an NBC prodigy. He left his home in Oklahoma, started his broadcasting career there and made an amazing leap from Tulsa. Thought of as a golden boy, Hartz was plucked by the Peacock in a haystack at age 24. He was the youngest correspondent NBC had ever hired.

Initially, Hartz worked smoothly and locally at WNBC-TV, Channel 4, in the big city. Jim was on the local set at about the time that Marv Albert was there. Bill Mazer was at Channel 5, Warner Wolf at Channel 7 and Sal Marchiano somewhere. (He always was.) Not much later, Hartz was on the Today Show. Jim won five Emmy Awards and two Aces. At NBC though, word was that he was eventually uprooted by the wonderful talent of Tom Brokaw.

When he left NBC, he settled at PBS where he identified a number of unique projects and stories. So Jim began his career magically but labored on his way down to earth. When he died this past April 17th, Hartz was 82 and was described as “folksy and lowkey.”

Not because he’ll ever need help to call football, something he’s done since the early 1970s, Al Michaels is getting more help in the Amazon Prime booth for the heavily promoted Thursday night package. Tony Gonzalez, Richard Sherman and Ryan Fitzpatrick will all give Al more meat and weight and listeners palpable heft.

It was considered a foregone conclusion that NFL Network’s Kay Adams, who already announced her departure, would leave mornings for Amazon. It hasn’t been officially reported yet or, at least not yet. Kay is is good talent. I’d say a little puzzling one. Yes, talented.

And we’ve never heard from the two women who called the Thursday games until now. It’s like they’ve been completely forgotten and never existed. Two bright and accomplished ladies, Hannah Storm and Andrea Kremer. Not a word. Maybe they know that being vocal about it could shed them in a poor light.

Dave Benz was booted from the Minnesota T’Wolves’ play-by-play at end of last season. He is already locked in, on Golden State the Bay Area. He’ll do studio work for the Warriors. Bob Fitzgerald, Warriors TVer, who purportedly gave Greg Papa the knife is still there.

During the Olympics for NBC, was mediocre at best.