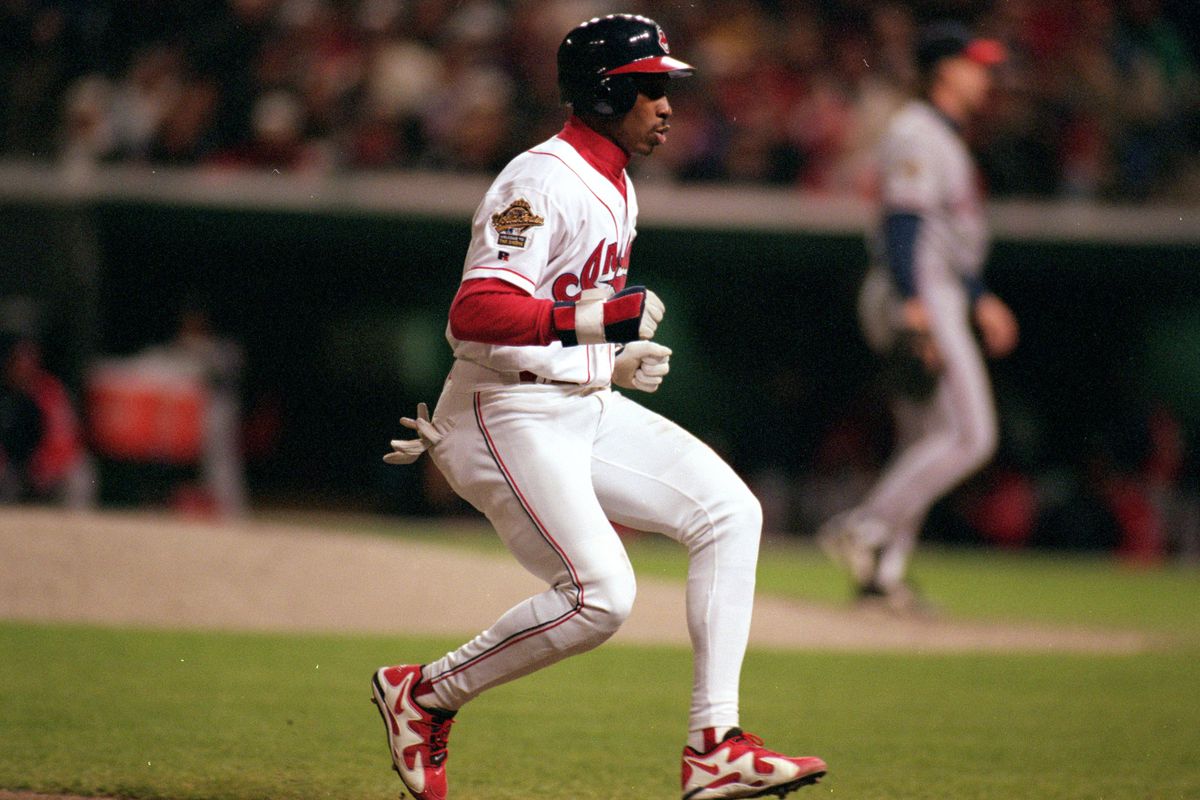 Kenny Lofton of the Indians. The Braves beat Cleveland in 6 games in the '95 series. It was an odd one for TV.

It wasn’t always this way. Viewers and listeners didn’t always need a scorecard to identify their own team’s announcers. In addition to radio, every game is televised somewhere, over-the-air, cable or some paid tier. It’s an endless list.

For many years, it was a matter of two or three broadcasters and that was it. All games were on radio and maybe a third of the schedule, at best, on television. For instance, Hall of Famers Curt Gowdy, Bob Murphy, Russ Hodges and Jon Miller started as sidekicks, doing a limited number of innings when they made it to the Big Leagues. Eventually, they moved up and presided over a big platform of their won as a number one.

These five broadcasters, all deceased, were considered ‘Assistant Announcers.’ They all stood out. They deserve special recognition and are listed here in alphabetical order:

Paul Carey had an unmistakably hollow sound. Sepulchral you might say, one of the strongest voices in baseball broadcasting. Paul was a perfect sidekick for Ernie Harwell. He spent 19 seasons with Ernie in the booth, beginning in 1974. Their voices carried far and wide over powerhouse WJR and the Tigers Network. How can you not like Paul? He did whatever was asked. Carey engineered the broadcasts too. Harwell was unceremoniously let go at the end of the 1991 season by Tigers’ President Bo Schembechler. Paul left on his own accord at the same time. Tiger fans never forgave the former Michigan coach for his unpopular decision. Bo might be remembered as much for his misguided firing of Harwell as he is for his winning years coaching Michigan football.

Drinking was his eventual undoing. He was a blessed talent and served as an Assistant to Red Barber, in Brooklyn. His voice resonated and he had a commanding and warm delivery. Connie was on the Dodgers broadcasts from 1943-56. Red could be quite demanding of young Scully when he arrived as a third voice at age 22 in 1950. Scully called Barber a father figure and Desmond a big brother. In some ways, he might have been just that, a sounding board for Vin who went through a challenging baptism under taskmaster Barber. But Connie couldn’t lick the alcohol problem and was let go before the Labor Day weekend of 1956. At that point, Jerry Doggett was brought up to Brooklyn from Texas.

Scully himself sang Jerry’s praises. Without him, it would never have worked, Vin believed. Jerry was seemingly a humble guy and obviously a team player. He accepted his secondary role without complaining. Scully on Doggett: “I would do seven innings and Jerry would do two. He was a dear friend and a wonderful human being. If there was praise issued, I was getting it. It was almost as though Jerry was overlooked. At no time in all our years together was there any sign of frustration on his part. No irritation or jealousy. Nothing. He was just a beautiful guy!” For 19 seasons, it was just Vin and Jerry, a symbiotic duo beloved by all of Southern California.

A voice that was silky smooth, O’Donnell was Manhattan born and Bronx raised. He died a young man at 56 in 1982. His 16 (1966-82) years as Chuck Thompson’s sidekick might have been some of Baltimore’s best radio baseball ever. For most of those seasons, it was just the two of them, On WBAL and its strong north-south signal, O’Donnell and Thompson had a loyal and committed following. Together, they sounded musical. Their pleasant voices accompanied summer’s warm breezes and gentle nights. O’Donnell actually represented the Orioles, calling the 1969 World Series on NBC Television and Radio.

Often called the best Number Two in MLB team broadcast history. He had half a dozen noted stops. First in 1953, he joined the Yankees’ booth under Mel Allen. He was let go after the 1956 season to make room for Phil Rizzuto. Woods then joined Russ Hodges in the New York Giants booth until they bolted for California after the 1957 season. In fact, it was Woods who uttered the parting words on-air when the Giants’ broadcast signed off for the final time. “God bless you,” he said. Woods then was Bob Prince’s number two in Pittsburgh for 13 seasons. The two got along famously. He then served behind number one voices, Jack Buck in St. Louis, Monte Moore in Oakland and Ned Martin in Boston. Woods had a twenty plus year career in baseball as a popular number two!

The popular duo in Tampa, Andy Freed and Dave Wills, are in Arlington calling the World Series live. They don’t have to worry about the challenge of having a relatively limited view, calling games off monitors,

The ESPN Radio gang, Dan Shulman, Jessica Mendoza and Chris Singleton are in Bristol doing play-by-play. The Dodgers’ voices, Charley Steiner and Rick Monday are both in LA. Steiner does play-by-play from his home and Monday color from a luxury box at Dodger Stadium.

Monday has traveled with the Dodgers hundreds of thousands of miles. Steiner, not quite as many, but a significant number too. The Dodgers have been longing for a championship since 1988 and now, with the Dodgers on the verge, the duo can’t taste the emotion that they would if they were in Arlington.

Rays’ broadcasters Andy Freed and Dave Wills are on site at WS; Dodgers and ESPN Radio do call remotely

According to Sports Media Watch, prior to this year, no World Series game had ever averaged less than a 5.9 rating. That record fell in Game 1 (5.1) and then again in Game 2 (5.0). My, how the mighty have fallen. Forty years ago, in 1980, the World Series matching the Royals and Phillies generated a record 32.8 rating and 54 share, (percentage of the number of sets on that were tuned to the Series).

Talking of the past, in 1995, 25 years ago, the Baseball Network had the rights. It was an in-house two year operation under the aegis of the Commissioner’s Office.

ABC and NBC shared the World Series. Remember, there was no Series in 1994 when baseball suffered labor strife.

The Braves were up 3-2 in games over opponent, Cleveland. Game #6 was assigned to NBC and game #7  to ABC. Both were scheduled for old Fulton County Stadium. Bob Costas had the play-by-play chair for NBC and Al Michaels for ABC.

Both Costas and Michaels headed for Atlanta. Costas knew he’d work game six. Michaels had to get ready in Atlanta for game seven should there be one. With ace Tom Glavine on the mound and David Justice’s sixth inning home run, Atlanta wrapped up the Series in six games, 1-0.

Michaels and ABC company had gone to Atlanta for naught. Al told me that as he sat in the limo headed to the airport the next morning, he passed the stadium and had a gloomy feeling. Al could have been doing game seven that night but it never happened. Earlier, ABC had lost the bidding rights to the ’96 Olympics to NBC. As it turned out, the same stadium was to host Olympic events the next summer and Al was to play a significant role in the coverage. So both opportunities went down the drain.

No worries, Michaels, 76 next month, is still sharp and has had a brilliant career. It’s a whacky business.

When Jerry died, Vin made the truly Vin-esque comment that he had “an unwrinkled heart,” and Ross Porter recently commented that when he came on board in 1977, he was above Jerry in the pecking order–Ross got the TV innings, and Jerry did only the middle three on radio when it was just him and Ross, and that Jerry’s response was to do everything he could to help Ross and make him comfortable. Vin also once said that when Houston came into the league, they reached out to Jerry to be #1, and he was tempted–he had been a god… Read more »