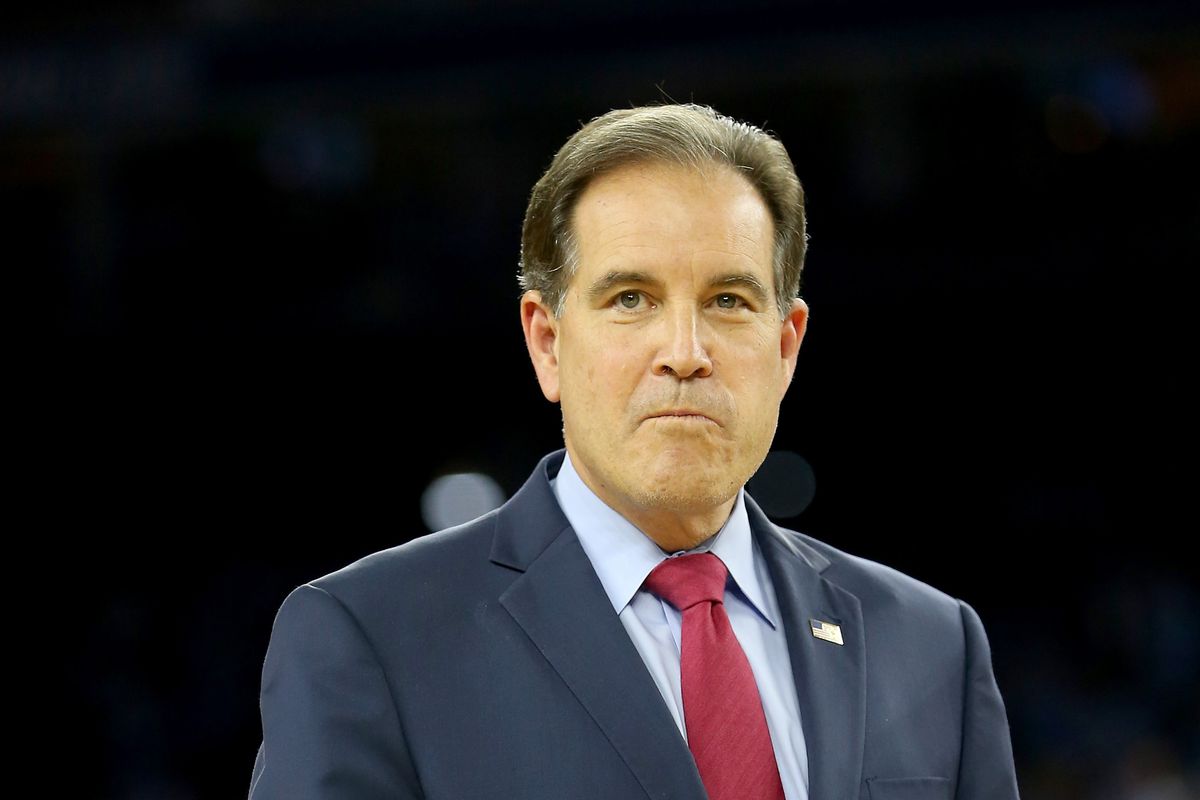 Fans will be happy should Jim Nantz' new contract, one currently being negotiated , continues to include the Final Four.

Nantz on Final Four down the road?

One can only hope that Jim Nantz won’t lose one of his lofty assignments in his current contract negotiations with CBS.

True, Jim’s plate is full and he doesn’t get to basketball until late in the season. This year perhaps, Nantz’ first assignment might be the tournament itself. Taking Nantz off the tourney would be shortsighted. If the network is considering giving the role to Ian Eagle, it’s underestimating the bond between fans, Nantz and the tournament.

Watching Nantz preside over the Final Four and then the Masters has become a spring tradition. He’s been the voice of the tourney since 1991.  As far as charisma and stature, CBS’ top two play-by-play  personalities are Nantz and Kevin Harlan.

Without exception, CBS’ Verne Lundquist brings mirth, warmth and personality to the microphone. As he got into his late 70s, Verne didn’t let his ego get in the way of his age. He realized that he was no longer as sharp as he was twenty years earlier. Doing a quadrupleheader during the NCAA Tournament was a bit  much. He’s still involved in some of CBS’ golf telecasts but enjoys other sports as we do, watching them on television.

The best ones have a fuzzy and comforting effect on the viewer. Nantz is one of them. Don’t tinker with the perfect face of CBS Sports. Jim should remain the lead voice of the NFL, golf and college hoops.

The more I listen to Gus Johnson (l), the more I think that he sounds like a carnival barker. He brings little beefy game material with him to the broadcast. He’s a cheerleader. That’s it. It’s not good enough. Perhaps it’s why his career has plateaued.

FS1’s John Fanta is a young announcer who attended Seton Hall. He seems well prepared and has a promising future. He recently did a couple St. John’s games for the network. Once his voice matures, he’ll have what it takes. He’s not as callow as his mid 20s age would lead you to believe.

There will be at least one NFL broadcast change next year. Zach Strief, the Saints’ longtime offensive tackle who retired in 2018 to become the team’s radio play-by-play announcer is returning to the field of play. He’ll become an assistant offensive line coach for New Orleans. So the club and its flagship station WWL are looking for a new radio voice. Why do I think that Joel Meyers, a gun for hire who calls Pelicans games on TV, has already submitted his resume for consideration?

Truth be told, the club should jump on Louisiana native son, Tim Brando. Not only does the area like one of its own, fans in The Big Easy like him. He started his broadcast career in the New Orleans area. Tim did the Saints’ pre-season telecasts for years.

Westwood One loses another property, the NHL

Westwood One which recently lost the rights to the Masters to SiriusXM lost the NHL rights. Sports USA has it now. Its coverage began this past weekend with the outdoor games. The talent: Play by play: John Ahlers, analyst: Brian Hayward and studio host: Ted Sobel, a longtime LA sports reporter.

Sportsnet’s Chris Johnston reported on Saturday night that ESPN will likely be part of the NHL’s next TV deal, which starts up next year. NBC currently holds exclusive rights to the league and it would be a shock if it didn’t retain part of the package. ESPN hasn’t aired an NHL game since 2004, but did air the World Cup of Hockey in 2016 with Steve Levy and Barry Melrose as its lead broadcast team.

Brian Burke, the longtime NHL general manager who was one of the few Americans working on Canadian hockey broadcasts, recently left his position as a studio analyst with Sportsnet to join the Pittsburgh Penguins as their President of Hockey Operations.

On Sunday, NBC aired Doc Emrick: The Voice of Hockey, an hour-long retrospective on the recently-retired Hall of Fame broadcaster. The program featured interviews with current and former players, his broadcast partners and colleagues, and Commissioner Gary Bettman.

An additional nugget: Commissioner Bettman worked for the late NBA commissioner David Stern as the league’s General Counsel. He took over the reins of the NHL as its head man in 1993. Bettman, 68, is one of two commissioners who graduated from NYU Law School. Ex NFL boss, Paul Tagliabue, 80, is the other. Pioneer network commentator Howard Cosell was also an NYU graduated attorney. Stern who passed last year was a Columbia University law school grad. His successor, Adam Silver, 58, attended U of Chicago Law. MLB commissioner Rob Manfred, 62, got his law degree from Harvard.

NYU, Columbia, U of Chicago and Harvard are generally ranked in the top six among American law schools. Yale invariably ranks number one in the country. Neal Pilson, 80, ex CBS Sports president is a Yale law man.

The Blue Jays who will start the season in Dunedin, Florida due to Covid will run a TV/radio simulcast. These efficiencies usually start out of necessity but I suspect that these synergies (a euphemism for cost savings) will somehow continue in perpetuity. Sportsnet released this today:

“Sportsnet will be streamlining production for the 2021 season by simulcasting TV broadcasts on Sportsnet 590 The FAN and across the Sportsnet Radio Network. That means fans will be able to listen to Buck Martinez, Dan Shulman, and Pat Tabler on both TV and radio. Ben Wagner (part of the radio team) remains part of the Blue Jays on Sportsnet broadcast team, joining Jamie Campbell, Joe Siddall, Hazel Mae, and Arash Madani in covering all the bases throughout the season.”

In November, the Jays announced that Matt Wilner would not return to his radio play-byplay role after twenty seasons.

Historically, Vin Scully did a simulcast in the years before he retired. The first three innings of his telecasts were simulcast on radio. It was a way of spreading the Scully wealth. Vin told me that Southern California was ready for it after Chick Hearn’s decades of simulcasting Lakers games.

In the early 1950s, Mel Allen simulcast some Yankee games on TV and radio.

If you put Scully on the top line, all-time who’ll debate you? Red Barber and Mel Allen go on line two, line three could be Ernie Harwell and Jack Buck. Harwell  was more of an artist and Buck more of a showman and entertainer. Both loved and admired in their regions.

The strongest pure MLB voices; timbre, tone, sonorous and in the case of a couple of these men sepulchral. This is not a commentary on their play-by-play abilities! I’m weighing in purely on voice alone in alphabetical order: Dave Van Horne, Pat Hughes, Todd Kalas, Duane Kuiper, Jon Miller, Steve  Physioc, Charley Steiner and John Sterling.

One of the busiest people in sports today is the NBA’s Senior VP, Tom Carelli who keeps tabs of the ever-changing schedule due to Covid postponements. Tom sends scheduling updates to the media regularly and frequently.

Ed Ingles was a New York radio fixture and he will be remembered on Sunday by WRHU, the Hofstra University radio station. Ed taught there in his post-retirement years. Pete Silverman, former EVP, programming at MSG Network, who now trains the college broadcasters at Hofstra is planning the special tribute to  Ed on the one year anniversary of his death. Silverman plans to have Mike Tirico and Tracy Wolfson among others share their memories of Ed. Both interned for him at some point. Ingles was the morning sports reporter for WCBS Radio. He also did color on Jets and St. John’s games.

Barry Landers, the one-time Islanders radio announcer has written a book, Walking with an Open Hand. Landers was a spot-on play-by-player and a disciple of the late Win Elliot.

I hear that two of Chip Caray‘s  sons, Chris and Stefan, are embarking upon a career in sports broadcasting. That would make four generations of broadcasters, son after son, in succession to broadcast sports. The progenitor of course was Harry Caray.

Rush Limbaugh who passed last week worked for the Kansas City Royals before he reached on-air stardom. He sold tickets for the ballclub.

Sal Marchiano turns 80 next Wednesday March 3d. Sal worked for three network affiliates in New York and an independent. For decades, he delivered the sports news with a smile on both the early and late sports news.

John Rooney turns 67 next Monday, March 1. He’s solid. Rooney still does the Cardinals on KMOX. Prior to it, he did the White Sox. Rooney also did the CBS Radio national baseball package before it lost the rights to ESPN. John comes quietly and goes quietly, a wonderful quality.

March 8, 1971 is a date that some of us are old enough to remember. We won’t likely forget it. The brawny Joe Frazier fought the brash Muhammad Ali for the world heavyweight title at Madison Square Garden. It was an event that had strong political overtones.

Next week we’ll hear from broadcasters who too are old enough to remember the fight, what it meant at the time and how it’s remembered today. Boxing’s legendary announcer Don Dunphy had the blow-by-blow for the closed circuit broadcast and Tim Ryan called the fight on radio for New Zeeland. It was picked up by the Armed Forces Network. The promoter Jerry Perenchio wouldn’t allow a live terrestrial commercial radio broadcast.

Look for the multi-part series late next week.

This may seem strange of me to say, but I’ve always felt that Gus Johnson was a misplaced local announcer. If he were doing, say, the Bulls, I bet fans would love him because he’d be screaming on every shot his team made, and that approach is popular in the Midwest. At the network level, it seems to me to be way overdone. And Jim Nantz is his opposite in many ways, and works well for a network. He and CBS will reach an agreement, and CBS may want him to cut back his workload a bit. He’s still “got… Read more »