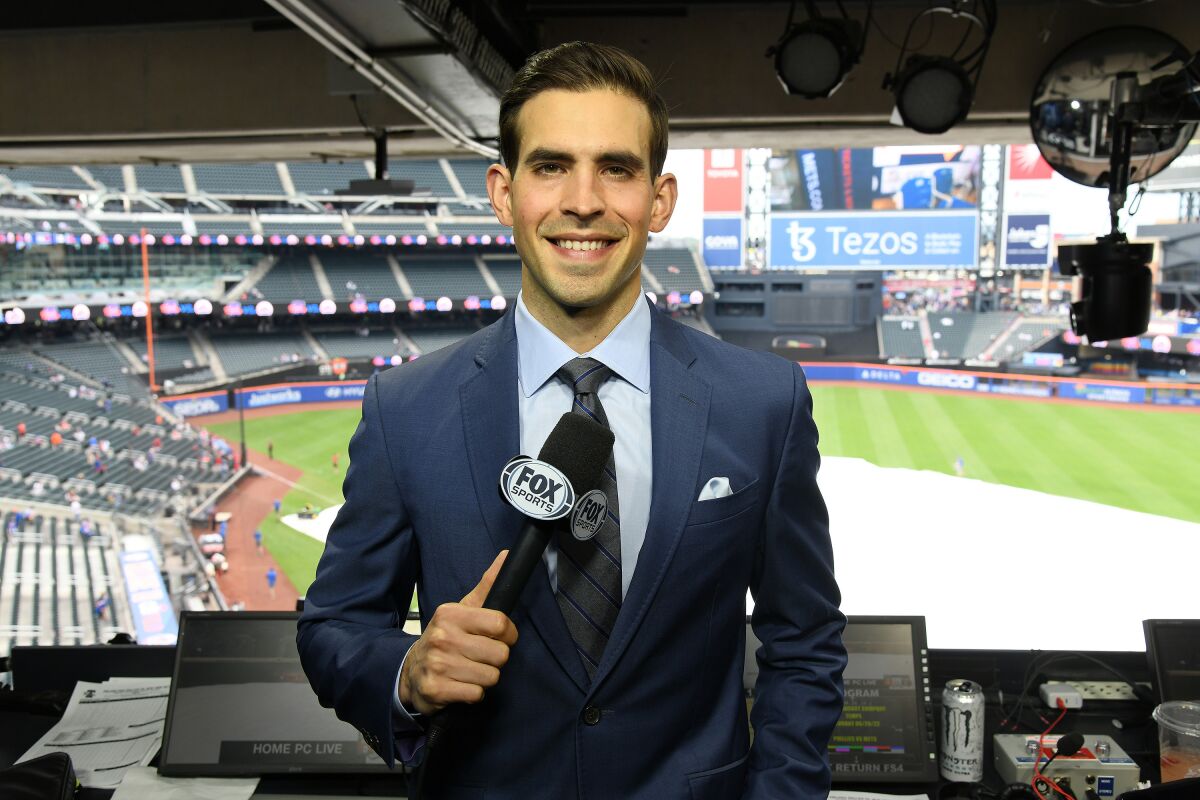 Fox' Joe Davis has improved vastly from a year ago.

“I agree with you 100% about Jim Nantz being pushed aside by CBS. Ian is a nice guy but not even close to being a guy who should step in for Nantz.

“Kevin Harlan would be my pick. To me, he’s number two among the network voices. No way should Jim be pushed aside…he’s as good now as he’s ever been. Besides that, both Jim and Kevin are super guys. So is Ian abut politics playing a big role in who gets what.”

Joe Davis is a new man. Not the one last year. He’s calmer and tells lazier tales than his predecessor, the very qualified, Joe Buck did. Davis, the Dodgers’ new voice spins stories comfortably and creatively, something baseball badly needs. From one year to the next, Joe Davis is a new man. He’s a 2022 measure of a talented baseball voice. That’s he in 2022. But his voice hasn’t yet fully developed, at least not yet. Another Floridian shared with me that Davis is difficult to hear. The room doesn’t completely fill up with sound.

Delighted for Joe’s progress. I may have been wrong in my past years’ assessment. The fact that Davis can  create, different sports, you can stock him with a projected lots of mic time. That’s with a variety of sports that he wants to do enjoyably and efficiently. He won’t sell pencils from a used cup. Good for him. I was really pleasantly surprised to hear the confidence in him.

Unsolicited and unhinged Kirk Herbstreit is still uncontained. His soft-spoken play-by-player Chris Fowler might not be back. Meanwhile, Chris is getting better and I’ve heard how Kirk was not very popular with Brent Musburger before he left. But I can’t confirm it though. Herbstreit’s ongoing inanities and depth of foolishness continue. Break down his comments and see what he says. Taking on two of the all-time best, Mus and Uncle Al? It’s a waste of time! If there was a way to economize words, Herbie would perpetuate and protract.

The late entertainers, Hope and Crosby, were also known somewhat for owning a piece of professional baseball and their interest in sports overall. They were quite involved in golf too, as we know. Hope owned some of the Cleveland franchise and the wildly successful singer/actor Cosby held an ownership in the Indians (now Guardians). In 1993, Hope flew to Cleveland and sang his trademark song, Thanks for the Memories at the final game played in Cleveland’s Municipal Stadium. The game was between the Indians and the Chicago White Sox.

Crosby purchased stock in the Pirates in the late 40s and maintained a partial ownership into the 1960s. Had it not been for Bing, we would never have had a video recording of Bill Mazeroski’s home run that won the 1960 Series in the last of the ninth in 1960. By happenstance, a video was found in one of Crosby’s storage rooms nonchalantly. Otherwise, the public would never have had it for its recent prosperity.

A similar situation had developed with the 1951 Bobby Thomson blast. Radio not TV broadcasts, We had the Russ Hodges’ Giants call. It took a good chunk of change for Red’s version to surface until we heard Barber’s familiar monotony. For some 35 years fans were deprived.

From what I can recall, Bob Costas had lots to do with pinning down the recording. It then debuted on his national radio show, Coast-to-Coast 1986 to 1996.

Larsen’s perfect game during the World Series in New York in 1956 was seen on NBC-TV. Television and the 1950s were synonymous. Americans had never experienced it. No TV yet, they hadn’t gotten further than radio. The Yankees’ were represented by pioneer Mel Allen and Brooklyn had prodigy Vin Scully.

“There are 64,117 , who will be roaring on every pitch,” he said. The first four and a half innings belonged to Allen and the back half to Vin. He said little because that’s what he was ordered to do. Radio was the medium for detail, the producers told him. For Vin who lived with his mother in her New Jersey home, he said little.

There were no graphics, score bugs, the actual score or balls and strikes. Limited the way they were, for Vin and Mel, it had to be eviscerating. They were also working all alone. There was hardly an iota of emotion.

The storied NYC sports PR man, John Cirillo, known for his engaging smile, warm greeting and a handle on  who’s who, sent me a note.

“Mike Breen, the winner of the 2020 Curt Gowdy Media Award at the Hall of Fame, Voice of the Knicks and Voice of the NBA on ABC/ESPN, will become the second Fordham University alumnus to receive the Vin Scully Award for Excellence in Sports Broadcasting. Scully worked during the formative years at the school station, WFUV Radio. The station celebrates its 75th anniversary this fall. WFUV will also present Emmy Award-winning CBS Evening News anchor and 60 Minutes correspondent Norah O’Donnell with the Charles Osgood Award for Excellence in Broadcast Journalism.”