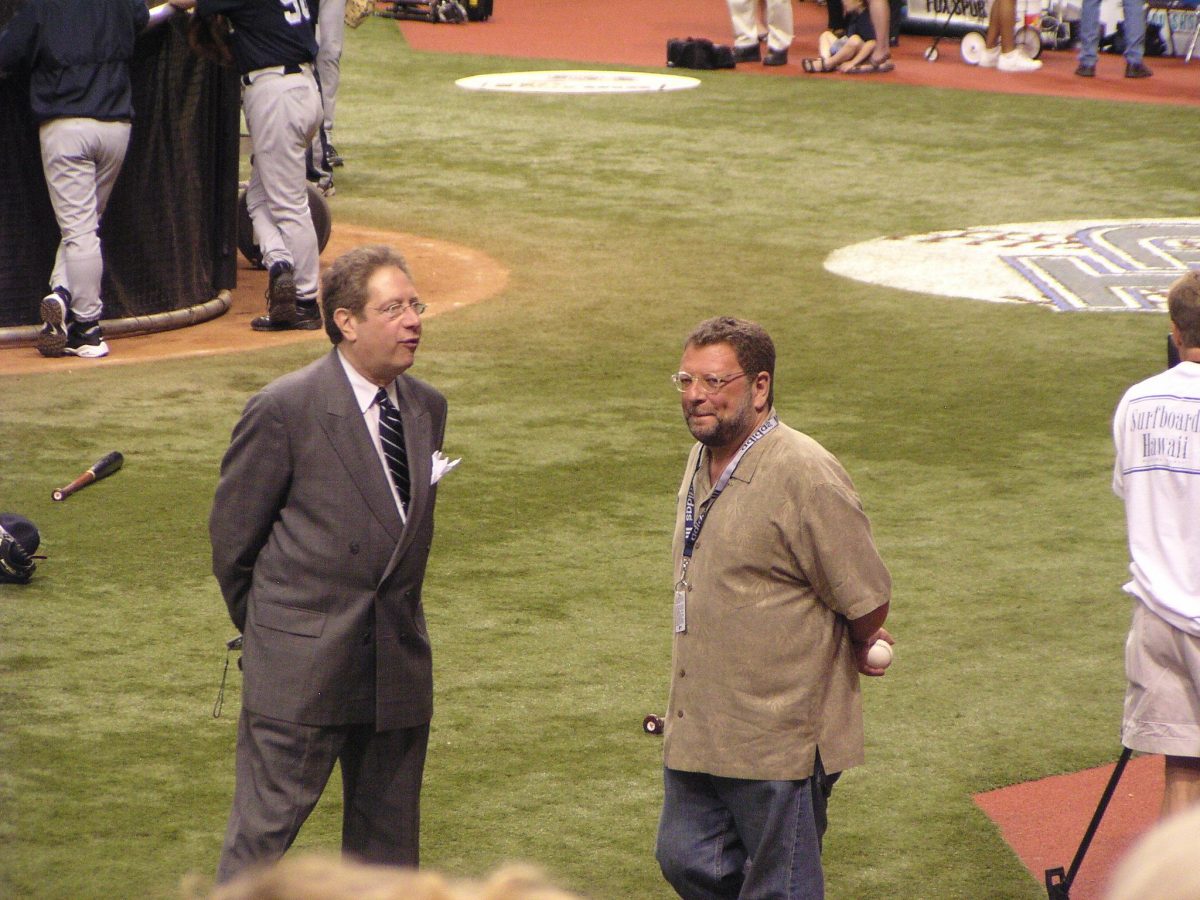 Through the 1970s, most announcers worked both radio and television. Harry Caray, Bob Prince, Russ Hodges, Mel Allen, Phil Rizzuto, Skip Caray, Chuck Thompson and so many others switched between the two mediums.

Today, it’s one thing to ask local baseball TV announcers to do all nine innings and it’s another to do so of those working radio. While, yes, it’s demanding on either medium, TV voices are at least supported by pre, post-game and studio hosts. Television is also a color commentator’s medium. In fact, dubbing TV voices as play-by-play announcers might be a misnomer. Quite a few are no more than set up men. Since Vin Scully hung up his cleats, how many good stories have you heard told by television play-by-play announcers?  The color man talks more on TV than his play-by-play partner.

One way or another, baseball’s TV announcers caption pictures which doesn’t require them to do what radio voices are asked to do, which is to talk fluidly for hours at a time.

While all games played by teams are on some sort of TV outlet, at least a few are run by a national network so that local announcers get occasional nights off. The demand on the vocal cords, while still significant, is not anywhere as draining or daunting as it is for the guys on radio. Radio does all the games, every one; drawn-out as they are, interminably long, given today’s field format and commercial demands.

I can immediately think of two guys who deserve a break, whether they ask for it or not. They’re the Yankees’ John Sterling and the Dodgers’ Charley Steiner.

Both have been heaped with criticism- some of which could wane if they took a couple innings off to refresh and rejuvenate themselves. Sterling is 80 and apparently in good health. He essentially says that he’d like to work forever. If so, he has a better chance of extending his broadcast life if he paces himself. Fans might be more accepting of him too, if they get a bit of a break from his single voice. Frankly, at the end of games, John, by my ear, sounds a bit tired. It sounds like he needs a nap. There are gaps of silence. Announcers 25 years younger would feel the same way.

Steiner has been guilty of glaring mistakes. He’ll be 70 next year and it’s been reported that he has time remaining on his contract. He too would be better off if he escapes for a couple innings every game to regain his strength mentally and physically. In Steiner’s case, there’s Rick Monday by his side to lend a vocal hand. If the team doesn’t want to splurge on a third man, they’d be better off using Rick on some play-by-play. He’s done a lot through the years.

Interestingly, Steiner and Sterling worked together with the Yankees and word was they didn’t cohabitate too nicely. I saw a piece written in 2004 when Steiner split the Yankees for the Dodgers. It indicated that Sterling had told colleagues he didn’t feel comfortable with Steiner because Charley botched calls. (Interesting coming from John, wouldn’t you say?) When Steiner partnered with Sterling, he happened to voice a couple late inning or extra inning home runs. Sterling didn’t like sharing the limelight. So when Steiner was gone, he offered  to do the whole game. The team bought in on his request. It also saved some dough doing so.

Remember, John’s shouldered with play-by-play, pre and post game shows and a million commercial reads (and astoundingly never ever butchers one read). He can be on the air for fours hours every day for a stretch of months. It ain’t healthy. For the many who don’t like John, they would get a break from him and for those who do, it might enable John to hang around a little longer.

The greatest of all of them had help even when working radio only. Prince had Jim Woods, Scully had Jerry Doggett, Allen first had Russ Hodges and then Curt Gowdy. Ernie Harwell had Paul Carey.

On radio, 162 games plus spring training and post season, make for seven grueling months. One voice is much too little for fans and much too much for announcers.

It’s impossible to think baseball broadcasting without mentioning  Vin Scully. As time went on, he got weary of the travel. He would tell others that his best friend on the road is a book. He told me early this fall that he attributes his word retention and phrase retrieval late into life to reading voraciously since his youth.

Jon launched his career in 1974 when he was hired by Charles Finley and the A’s at the recommendation of Monte Moore. Miller became Moore’s #2 at age 22. Finley dumped him though unceremoniously and inexplicably at the end of the season. Miller later became a Hall of Fame broadcaster through years with the Rangers, Red Sox, Orioles, Giants and of course as a national voice on ESPN.  The CD includes snippets of Miller’s first year.

Sticking with baseball, With game times listed one way but first pitch actually occurring at another, Brewers announcer Bob Uecker said during the playoffs, “Tomorrow night’s game begins at 8p plus.”

The late Dick Enberg, who would have told you that baseball was his first love, had advice for announcers, “You sit in the chair – you don’t own it.” Good counseling indeed. You might be confident, you might be loved by your listeners and you might be doing a great job but remember you’re working at the behest of the team owner.

Segueing from baseball, these glittering  broadcasters have been recipients of both baseball (Ford Frick Award) and football Hall of Fame recognition (Pete Rozelle Media Award):

Next month will be the anniversary of the Jets defeat of the Oakland Radiers in the AFL title game,  27-23. Merle Harmon and Sam DeLuca had the call on powerhouse WABC Radio. Immediately following the post game show, WABC air personality Chuck Leonard played We’re A Winner, by the Impressions, to celebrate the Jets triumph. The game was blacked out on New York television.

Harmon, referencing Namath at QB: “Joe Willie looking, Joe Willie throwing.”  The late Harmon called Jets games for nine season. He told me that he was hired in 1964 by the station’s sports director, Howard Cosell. The Jets of course went on to to beat Don Shula’s Colts in the Super Bowl, 16-7.

It’s so puzzling to me that I can’t get it off my mind. How is it that Cosell has not been honored yet with the Rozelle Award? I can’t dig into the minds of the decision makers but if the concern was that Howard would make a damning acceptance speech, no worries. He’s no longer alive. Cosell essentially was the face of prime time football when it was launched in 1970 on ABC Television. Dennis Lewin who headed up the television office for the NFL for years after producing Monday Night Football for ABC told me that if Howard were alive he’d probably say he doesn’t care.

Marv Albert made a highly successful transition from radio to television in the late 1970s. He told me that when calling a basketball game on television, announcers don’t have to say, “no good” on a missed basket. Viewers can see it. Interesting tidbit, when Marv went to Syracuse University, he broadened his experience by hosting a classical music show, “Tchaikovsky to Beethoven, for three, “yesss!”

When Tony Petitti was running CBS Sports and Gus Johnson called so many gripping NCAA Tournament finishes, Tony had requests from fans to place Gus in the studio and essentially have him sit around until games are close and then have him call the conclusions off a monitor. Don’t think it would fly! Gus has moved on. Tony is now Chief Operating Officer of Major League Baseball.

There’s no better prepared or harder working play-by-play man in college football  than Joe Zagacki who’s the radio voice of the University of Miami Hurricanes; football, baseball and basketball. He’s been a fixture in the Miami marketplace for thirty years.

Like many of his colleagues around the country both pro and college, he’s been grumbling about poor vantage points that radio announcers are given. Way too often, they’re put in the corners of football fields, somewhere in the upper reaches.

Joe recently passed this note along for those challenged by impossible broadcast positions:

“Paul Keels at Ohio State mentioned this to me then Tony Caridi of West Virginia did too. They said these binoculars would be life changing.

He was right. I watched every play through binoculars when I was in Dallas calling Miami and LSU and then almost every play at Hard Rock Stadium. At Hard Rock, we are in the northwest corner of the end zone. So anything going toward the east end zone or coming out is a little tricky.

Its not perfect, but they sure do help. Amazon sells them for $40 . Its been a great investment.”

I liked Marv’s take on radio hockey, which he was excellent at. As described in your book, Dave, Marv was big on describing where the puck was, but not necessarily who has it on the way out of the zone.
In other words, if the Rangers made theee defensive passes in their own zone, rather than get caught up in Maloney to Vadnais to Esposito; he’d say something like “And here come the Rangers to Center… or out of their own zone…” and then pick up the players names.
Superfluous passes arent necessary to follow the game sometimes .

I grew up in southern Nevada, and we were basically a Los Angeles market, so we got the Dodgers, Angels, Rams, Lakers, and Kings. I thought–and still think–Bob Miller was a brilliant hockey announcer. But when I got to New York City for grad school and heard Marv do the Rangers on the radio, I was amazed. It was as though he was AHEAD of the puck, he was that good. And he was able both to call the plays and insult Sal “Red Light” Messina the whole time, too.

Regarding the advice Vin Scully gave Joe Davis – ‘Less is more’. I can say Joe needs to remember that one as he ‘over talks’ with constant stories and worst, he keeps talking as the pitch is coming to the batter. Davis could cut back talking by at least 25% (actually 50%) and the broadcasts would be much more enjoyable. Scully had a great sense of timing as to when to talk and when not to, along with how to pause telling a story for the game action. Two things Davis is greatly lacking. As to Merle Harmon. Growing up… Read more »