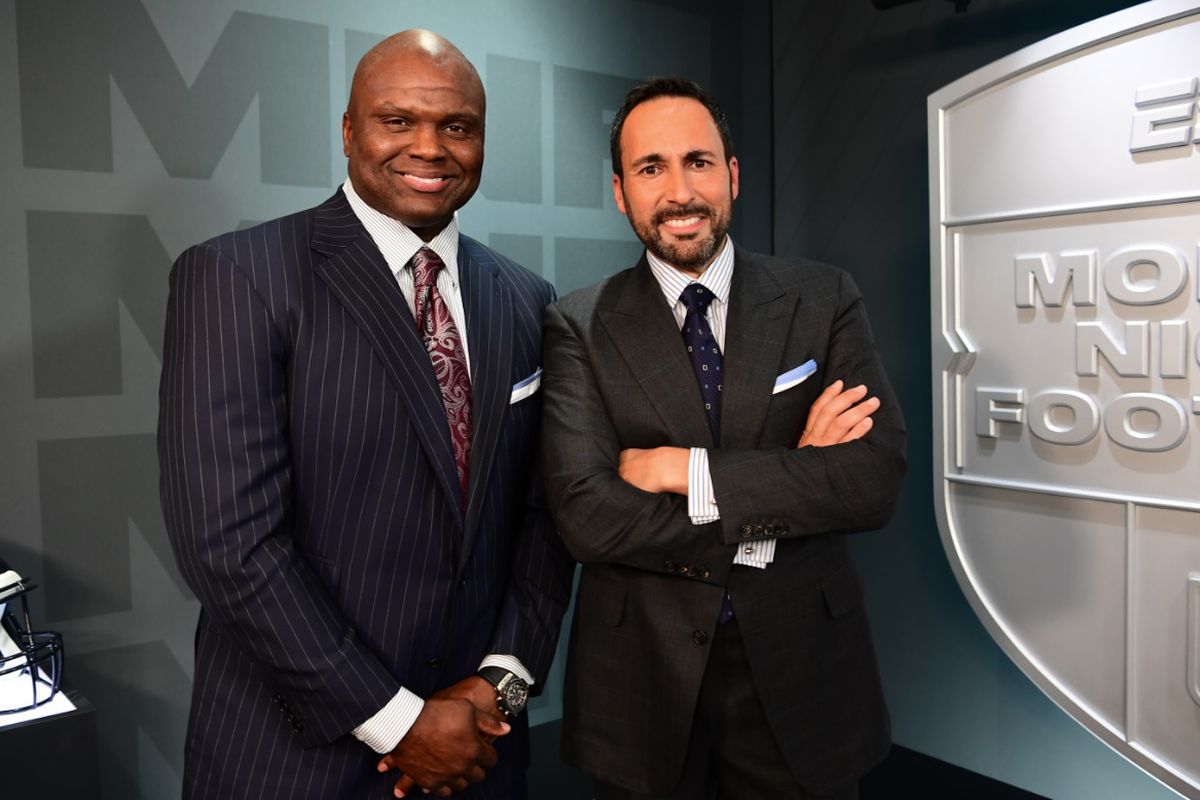 When it comes to overpowering timbre of years ago, the names that hit my consciousness are Don Criqui of CBS and NBC, Ron Franklin of ESPN, Ray Scott of CBS and Charlie Jones of NBC. Pat Summerall also had a deep delivery on CBS and later on Fox. The avuncular sound of Verne Lundquist was always driving. Baseball’s Jon Miller boomed Sunday nights on ESPN. Today Kevin Harlan in my view is blessed with the deepest of pure voices in sports.

Historically, best of all and few would argue was John Facenda, the sepulchral Voice of NFL Films. He didn’t do play-by-play. Yet his narration was classic. Facenda was a longtime Philadelphia newsman who teamed on the local set with Jack Whitaker.

There were others in the past who’s tones were rich, plentiful and delightful. Think of Dan Kelly on CBS’ NHL call, Vin Scully, perfect for baseball, Chris Schenkel on CBS and ABC football. Mel Allen on NBC’s baseball. Dick Enberg‘s sound was syrupy and Jack Buck‘s reverberated. Keith Jackson had one of those rotund voices, aspiring announcers can only hope they’ll have. Locally, Philly’s Harry Kalas spoke economically, stretched syllables and filled large rooms with a hollow pitch.

Cheers for showing the exit sign to Booger McFarland and Joe Tessitore. Neither possesses the ‘it’ factor, though both probably will land elsewhere on the ESPN landscape.

As for the odds-on favorite to replace Tessitore, Steve Levy, I recall first hearing him on WFAN back in the late 80s, early 90s. Solid on radio, an update man on the level of latter-day peers on WFAN, Bob Huessler and John Minko. All effective, inflective voices with copywriting skills to match.

I’m not sure whether Levy possesses the stylist attributes required of an MNF personality. And it’s not because of any doubt; I just haven’t heard enough to judge.

“It,” as a stylistic manner of hosting/announcing, is not a gift to easily recognize, even within one’s self. Keith Jackson had it. Frank Gifford did not, as an announcer; he had another sort of “it,” an already established star quality that carried him through, making him the ringmaster of an otherwise borderline-sane comedy ensemble. The centerpiece was Howard Cosell. Had The Giffer not starred on a football field, (you know the rest of this sentence, if not, check “I Never Played The Game” by Cosell).

I’m not sure who’s out there now able to carry that MNF mic anymore. ESPN needs a personality with a sense for both the dramatic and humorous, either on play-by-play or analysis, who will give people a reason to tune in for, other than the football. The counterpart needs to be a George Burns, a Dan Rowan, a Dean Martin, a Bud Abbott . . . a Frank Gifford. (You likely can now successfully guess my age)

For MNF to ever again transcend, it needs an over-the-air presence, after being tucked away on cable for so long.

This is, after all, a show.

Can we all agree – or not – that Bob Costas be named the guardian (or at least guardian ad litem) of the game of baseball?

Here’s a suggested hierarchy of a Baseball’s Commission that would preserve integrity and fairness at all levels, foremost including the fans:

Years ago, Keith Jackson told Los Angeles Times media critic, Larry Stewart:  “I’ve announced every kind of sporting event except hockey and demolition derby, and to be frank about it, I don’t really care to ever do those.”

Caught up with Steve Albert, the youngest of the famed Albert brothers. Marv is the big brother, then there is Al and finally Steve. Albert is now retired after a long NBA run and quite a bit more. He started with the Nets in 1975-76 when they were still on Long Island and part of the old American Basketball Association.

When the ABA merged with the NBA in 1976, Steve continued as the team’s television voice. He spent 13 years with the Nets, five with Golden State, five with the Phoenix Suns and one with the New Orleans Jazz. Steve attended Kent State where he called the hockey games. He now serves as a volunteer mentor to the students who announce the school’s hockey today. There’s nothing like giving back. Kudos to him.

Albert tells me that in his years in Phoenix he struck a strong friendship with the venerable Al McCoy, the most senior of announcers in the NBA. They share the same birthday, April 26th. Al and Steve would often dine at a Phoenix eatarie named, Chompie’s. He loved the place so much that he named his dog Chompie. Steve did hockey too, the Islanders in their glory years and three years of Mets baseball on television and radio.

Brother Al Albert is retired too. Al was a hockey player, a goalie with the Toledo Blades. He began his New York broadcast career with the Nets in 1971. A few seasons later he moved west to Denver where he was the longtime voice of the Nuggets on both television and radio. Al was the NBA voice on USA Network too for a couple season in the 1980s. His final NBA gig was with the Indiana Pacers from 1998-2006. All Albert brothers were solid boxing voices. Steve was inducted into the International Boxing Hall of Fame.

Did you know that Dave Flemming of ESPN has a brother Will who now does the Boston Red Sox on radio with Joe Castiglione? Actually, how would you know? Baseball hasn’t been played yet?

Two CBS biggies were once public address announcers in Houston. Longtime news anchor Dan Rather handled the P.A. for the Houston Colt 45’s, later the Houston Astros. Jim Nantz was the arena voice for the University of Houston basketball team.

Great stuff! I have to say, I WISH Keith Jackson had done hockey at some point, because that would have been fun to listen to. Maybe not to big hockey fans, though ….

Voice and timbre matter. Ned Martin once said that Byrum Saam had a voice that just boomed out at you, and from clips I’ve heard, I get that. With By and Harry Kalas in the booth, Phillies fans really had a pair. I’ve read that, years later, fans still come up to a former 2B who made an unassisted triple play and say, “Mickey Mooorrrannnndeeeeennneeee.”