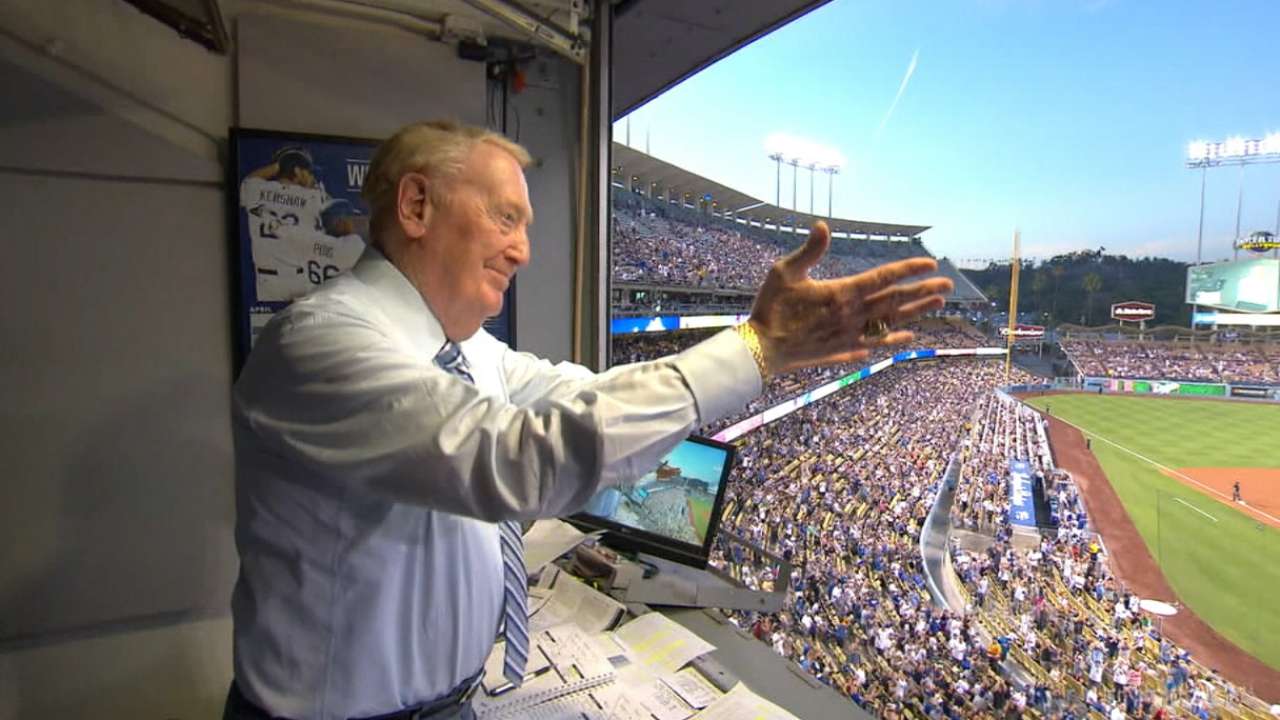 Vin Scully absorbing warmth of his admirers at Dodger Stadium

Studying and breaking down baseball’s greatest broadcaster ever, Vin Scully; a 1957 and 1967 version

Calling a Brooklyn-Pittsburgh game from Forbes Field on Memorial Day, May, 30, 1957, Vin Scully, in his 8th season with the Dodgers, mentioned the fact that Pirates second baseman Bill Mazeroski was fined by his manager Bobby Bragan for a mental error the day before, a game the Dodgers won 1-0. Scully shared with his radio audience what Bragan told the press before the game. In Vin’s words, Maz is “$25 lighter in the pocket.”

The skipper said that Maz, only 20 at the time, could have stopped a ground ball by Gino Cimoli in the 8th inning that went into centerfield. Had he done so, it would have prevented the only run of the game from scoring. Instead, Maz gambled. He tried to play it fancily and the ball carried past him into centerfield, enabling Junior Gilliam to score. “Had he just stopped it,” Scully said “the Dodgers would not have scored what turned out to be the winning run on that at bat.”

Ironically, Mazeroski famous for his game winning homer in the 7th game against the Yanks in the 1960 World Series went on to win 8 gold gloves.

Bragan considered himself a protégé of Branch Rickey. In ’47, Bragan then a backup Dodgers catcher, was among a group of white players from the South who signed a petition, protesting the Dodgers signing of Jackie Robinson who broke the color line. Bragan later admitted he was wrong. In fact, Bragan managed Henry Aaron in Milwaukee in the 60s.

Open criticisms of ballplayers were not common then.

That mournful final season in Brooklyn

Scully, Jerry Doggett and Al Helfer were the Brooklyn announcers that ’57 season, the Dodgers last back East. Why didn’t Helfer join the team the next season in Southern California while Scully and Doggett did?

The Dodgers televised just about every home game in Brooklyn and needed three fulltime play-by-players. When the team moved to LA, owner Walter O’Malley swore off television which he felt hurt attendance in Brooklyn. No home games were televised in LA in the early years. O’Malley brought only two announcers to California. According to Lindsey Nelson, Helfer demanded of the Dodgers the same number of innings as Scully if he were to move to LA. Big Al didn’t make the cut. Scully (1950-2016) and Doggett (1956-87) presided over the broadcasts alone from 1958-74 until Ross Porter was added (1977-2004). At that point, the Dodgers were televising more road games. Their first year in California, 1958, only 11 games were  on TV, those from San Francisco.

Scully, once settled in SoCal

Flash forward to 1967. Scully, who by then earned a great deal of reputational capital, did something that wasn’t widely done across baseball broadcast booths. He made a point about a boneheaded play, although obliquely so. In the opening game of a doubleheader in St. Louis, Julian Javier, the Cards second baseman never left the batter’s box after he was jammed and the ball trickled toward an infielder. Javier was out by a mile. Scully described the play, leaving the obvious conclusion for the listeners in California. Javier didn’t hustle.

Conveniently, moments later after a pregnant pause, Vin shared something he said he had come to find out earlier. When players are fined for mental mistakes, the money goes to a charity. Vin said he watched “the manager’ (assuming it was Walter Alston) put the names of 4 players on an index card that was labeled the “Cancer Society Charter Members.” Scully said that the fines could be as much as $100. (valued at about $750 in 2018) The dollars collected went to the Fred Hutchinson Cancer Research Fund. He never criticized Javier but it didn’t take analytic interpretation to figure out that perhaps the Cards’ infielder deserved a fine. Another instance of why Scully was unequaled. He was critical when merited but without undressing players publicly.

Jaime Jarrin, in his first six years doing the Dodgers road games in Spanish would recreate the broadcasts from an LA studio by listening to Scully. Vin said he elaborated on weather conditions from the venue on the road to provide Jaime more color and give him more prep time in case he would have to fill during a rain delay. Eventually, Dodger Spanish radio traveled.

Had only Harvey Kuenn…. + Koufax basketball

My buddy, Barry Kipnis, like virtually everyone, a huge Scully fan, says sarcastically, “Can you imagine if Harvey Kuenn would have broken up Sandy Koufax’ perfect game (on that glorious night in September,1965 against the Cubs)?” As it turned out, of course, Kuenn struck out. Vin’s description of the final half inning turned out to be what is arguably the finest piece of sportscasting ever; a Scully authored masterpiece!

More Koufax and Porter. Ross did football for NBC in the 1970s. He also did basketball regionally. His hoops analyst one season was none other than Koufax. Sandy was first known as a basketball player at the University of Cincinnati before turning his attention to baseball.

From the ‘That’s too much information’ category, here’s a bit of trivia. Scully and Porter, share the same birthday, November 29th. Porter is 79 and Scully is 90. Porter says that when the Dodgers didn’t renew his contract after 28 seasons, he was never called by the team. Instead, a club official reached out to his agent.

Milo Hamilton – unabashedly told me several years before his death that he considered himself the second best announcer in baseball behind Scully. There’s nothing like humility.

Jack Brickhouse, so identified with the Cubs also did White Sox games when WGN TV had rights to both teams and the station primarily did home games of both teams. The Sox and Cubs rarely overlapped at home. Did you know that Jack spent a season doing New York Giants baseball in New York? You might argue that Brickhouse, who didn’t do baseball radio, but did so much TV in the 50s and 60s might just be the father of baseball on television.

The Bucks, Jack and Joe plus the earlier generations of broadcast greats

I was always troubled by something Jack Buck said to me more than 30 years ago. We were sitting poolside in Palm Springs at a baseball sponsorship conference. I told him how I thought a world (as many others did) of Marty Glickman’s football. He turned, shielded his eyes from the sun and said, “basketball.” I again said ‘football’ and without looking at me, he again said, “basketball.” End of conversation. I guess that Jack wasn’t high on Marty’s football.

Buck was smooth at anything he did. I once told Marty that when Jack would do football on radio, he would occasionally, say, “Montana gives it to the second man through,” obviously unable to immediately identify the name of the ball carrier. Glickman said. “Buck is slick.”

By the way, in 1966, the Knicks played the Warriors in St. Louis as part of an NBA doubleheader when the Hawks were still there, before moving to Atlanta. Bill Mazer was doing Knicks games that season but couldn’t make it to St. Louis. Buck filled in and called the game back to New York. Buddy Blattner was the Voice of the Hawks many of those years. Many say Buddy’s basketball was better than his baseball (Royals and Angels).

More Buck…Son Joe Buck is a heck of a writer. In his fun read, Lucky Bastard, he talks quite a bit about his dad. While Jack was famous in St. Louis, Joe says that his dad wasn’t particularly rich. No, he wasn’t impoverished and made a real good living, but a divorce, Joe’s tuition costs in private school and more took a toll on Jack’s finances. Joe says that Jack, being a good guy, never hired a pushy agent. According to Joe, Jack also enjoyed the gambling tables in Vegas casinos.

The old-timers, particularly some of the pioneers, never made big money. I can remember visiting Red Barber in his home in Tallahassee. It certainly didn’t sparkle with riches. It was rather modest. Marty Glickman didn’t own the one bedroom apartment in which he lived in the Upper East Side of Manhattan, albeit in a luxury building. Marty’s proteges have had lots more financial success than their mentor.

Tidbits of recent moves and notes

Tough week, last week. Word that the fine combination of Notre Dame football broadcasters won’t return, Don Criqui and Allen Pinkett. Criqui started broadcasting football for CBS Television in 1967. He was a mainstay for years on NBC and CBS. He will be missed. He has been doing the Irish since 2006. Pinkett developed nicely. Nothing like learning from the best. Criqui worked for years with Bob Trumpy on NBC. In 1970, Don called the then record setting 63 yard field goal by New Orleans’  kicker Tom Dempsey .

Tennessee fans lost their longtime and beloved Voice of the Vols, John Ward. He was idolized all over the state and made his money running an ad agency in Knoxville. He donated $2 million to the university.

Chris Kroeger was hired as the new radio announcer of the Charlotte Hornets, succeeding the retired Steve Martin. Kroeger has no play-by-play experience. Yikes!

The Astrodome was nicknamed ‘The 8th Wonder of the World’ when it opened in 1965. Mentioning Lindsey Nelson above, I assume he wasn’t afraid of heights. When the Mets made a trip there that ’65 season, Nelson, one of the team’s trio of announcers, trekked along the catwalk to the apex of the roof and reported on-air from there. It had to be harrowing. It was the equivalent of some 20 flights above the playing surface. He said half kiddingly, “I was in fair territory but I was safe.”

Jorge Rojas, for many years was the sports editor of the Miami Herald. I asked him how he felt about keeping writers on the same beat very long. Some editors might tell you that doing so makes reporters a bit too complacent/comfortable or worse, it could bias their journalistic integrity. For instance, in South Florida, Ira Winderman has covered the Miami Heat for the Sun-Sentinel pretty much since the team started in 1988. Rojas takes a different view: “If it’s not broken, don’t fix it.”

Caught this randomly for what it’s worth

From Forbes Magazine: The median age of the NBA viewer is relatively young, (42), compared to the NFL (50) and Major League Baseball (57).

Before playing at the University of Cincinnati, Sandy Koufax played basketball and was a team captain for Lafayette HS in Brooklyn, NY.

Big mistake by Notre Dame and/or the rights holder on letting Criqui and Pinkett go…they made a great team…as for Criqui, grew up watching him on NBC & CBS from the 70’s thru the 90’s….

Ironically, Tony Roberts was unceremoniously fired in 2006 after more than a quarter of a century as the radio voice of the Irish. I guess the loyalty there only goes one way. I also loved Joe Buck’s book. It gave me a totally different perspective on him and how he broadcasts. I got to hear Marty Glickman on Jets games in his later years and thought he was excellent–frankly, better at calling the game on radio than Jack Buck. And I thought Lindsey Nelson was better than both of them on radio, and someone who was really good on radio… Read more »