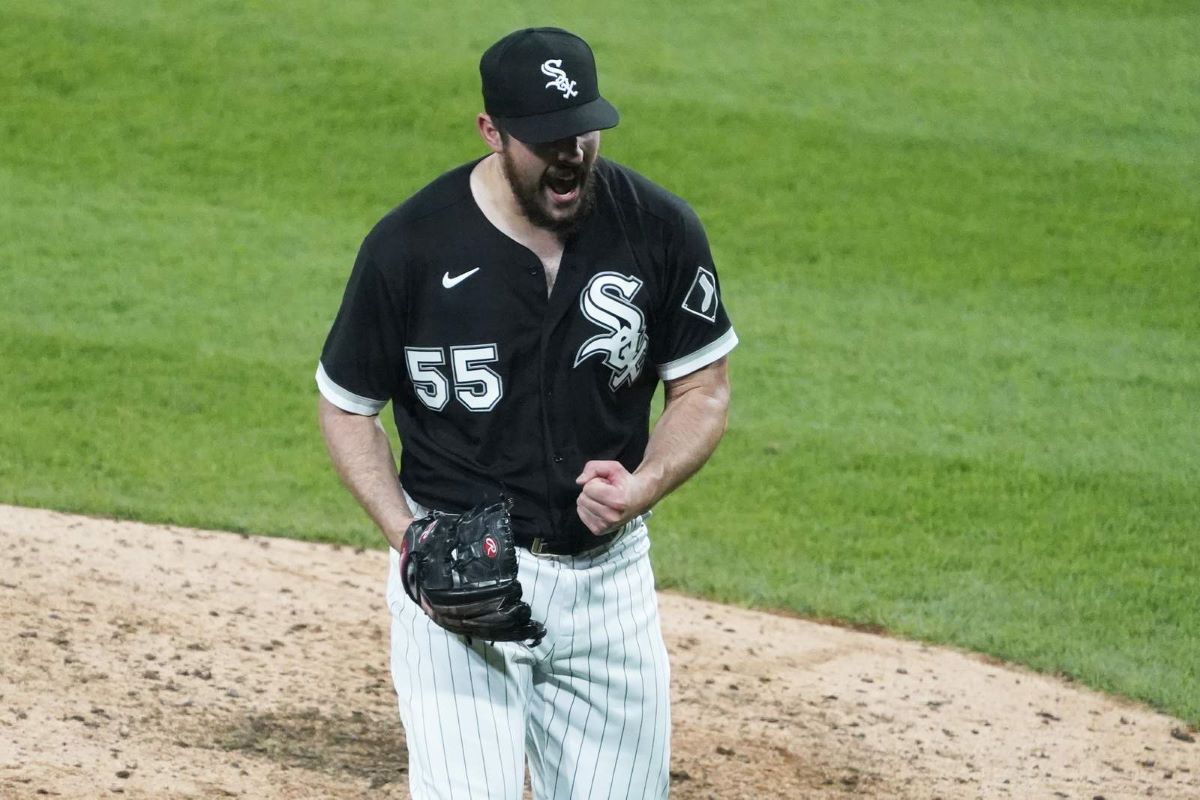 The Sox' Carlos Rodón pitched a no-hitter last night and was two outs away from a perfect game. Chicago radio voice, Len Kasper didn't utter the words perfect game until it was broken up or no-hitter until Rodón completed the feat.

Last night, I tuned in to Len Kasper, the White Sox’ new radio announcer. It’s his first season doing radio after leaving Cubs TV.  And by pure accident, the Sox’ Carlos Rodón threw a no hitter. Len seems to have made a seamless tradition from captioning the picture on TV to painting it on radio. He called the game rhythmically and confidently. One of his heroes growing up was the late Ernie Harwell.

By happenstance, I caught Kasper when Rodón threw a no-hitter. Len must subscribe to old-school superstition. I heard only the ninth inning and Len skirted around using the words perfect game or no hitter until Rodón nailed down the no-hit, no-run game. There was no mention of ‘perfect game’ either, going into the ninth. Kasper responded exultantly after the final out.

Frankly, he did listeners a disservice, failing to tell the audience that the Sox’ hurler had a perfect game going into the last of the ninth. When the Tribe’s Roberto Perez was hit by a pitch with one out, Kapser told listeners that the Indians’ catcher was the first batter to reach base. At that point, I knew that Rodón still had a no-hitter in the works.

ABC in its day under Cap Cities: Bias against the NBA because of a preponderance of its black players? 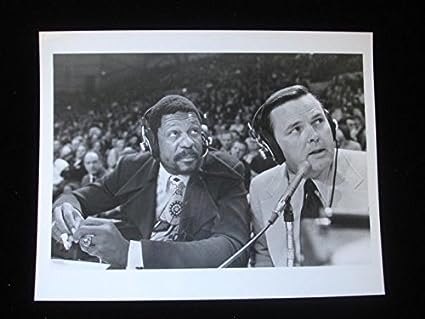 In his candid book on network sports in 1989, Jim Spence, Roone Arledge’s top lieutenant at ABC, talks about the network’s negotiations with the NBA. The NBA broadcasts were on ABC through the early 1970s when CBS got them after disputed and contentious negotiations with the league. (Bill Russell and Keith Jackson working NBA games on ABC in 70s) The negotiations didn’t end amicably. The NBA and ABC ended up in court. The NBA was consulted by Barry Frank, a powerhouse in television sports and a one time CBS Sports head himself, and Jay Michaels, Al’s dad.

In the 80s, ABC tried to reacquire the NBA rights after CBS had picked up the NCAA broadcasts. The NBA wasn’t too pleased that it would play second fiddle to college ball through much of the winter.

In 1985, ABC was bought by the smaller Cap Cities for a whopping $3.5 billion. Meanwhile, ABC’s Jim Spence was immersed in accelerated conversations with David Stern of the NBA to bring the games there. When he brought the deal to his bosses, they didn’t want to take chances with new sheriffs in town, Cap Cities. He was told that if ABC paid a pretty decent fee for the rights, much of the money would go to the players who would use it to buy drugs. Spence suspects that Cap Cities, an old school company, was reluctant to run pro basketball because “it was largely a black man’s game.”

In 1995 Disney bought Cap Cities for $19 billion, giving the latter a hefty $15.5 billion profit in a short span of nine years!

It will be a summer of firsts for Mike Tirico and the NBC Olympics primetime show beginning in July in Tokyo. Tirico, who makes his debut as the Summer Olympics primetime host, will anchor the show outdoors from a fifth-floor deck with a panoramic view of the Tokyo skyline, highlighted by the landmark Rainbow Bridge. The location marks the first time that the host of NBC Olympics’ primetime presentation will anchor from outdoors (NBC’s first Olympics was the 1964 Tokyo Games).

Did you know? Mark Lazarus is the CEO of NBC. Years ago, his dad John Lazarus was head of sales for ABC Sports and prior to it, Director of Broadcasting for Major League Baseball.

Mets VP, Communications, Harold Kaufman tells me that virtually all teams are working their broadcasts remotely. He says some radio guys will travel occasionally. His guess is that once the pandemic is behind us, broadcasters will likely call games from game venues.

Ken Korach, radio voice of the Oakland A’s, penned a book a couple years ago on his longtime partner, the late Bill King (Holy Toledo). Jon Miller, one of the Giants’ voices and formerly ESPN’s Sunday night baseball man, wrote the foreword. 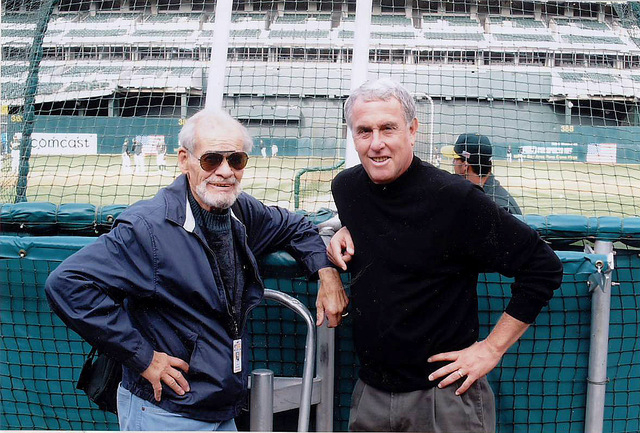 In 1975, Miller was the announcer for soccer’s San Jose Earthquakes. On May 12th in what Miller calls a twist of fate, he was headed back to the Bay Area from Toronto and was connecting flights in Chicago. Wouldn’t you know it? That very same day the Warriors were connecting in Chicago too, after sweeping the NBA championship series in Landover, Maryland against the Bullets. (Yes, back then NBA teams traveled commercially including connecting flights, even after just winning the championship!)

Miller said he moved timidly into the first-class section where he spotted Bill King with a bottle of Champagne in his hand talking to star Rick Barry. King, Barry and Miller toasted the champion Warriors. When King found out that the Earthquakes goalkeeper, Mike Ivanow, was a Russian-American, he insisted on meeting him. For the next twenty minutes, Bill spoke Russian with Ivanow. King was indeed a renaissance man. His knowledge beyond sports was eye-popping. King was a sponge for information of all sorts. (King, left, with Korach)

For many years, a good number of NBA teams simulcast all their games. Fellows like the Lakers’ Chick Hearn , Seattle’s Kevin Calabro, Phoenix’ Al McCoy, Utah’s Hot Rod Hundley and the aforementioned King with the Warriors presided over the TV and radio simulcast. But through the last couple decades, the NBA discouraged simulcasting. Going into last season all teams produced separate radio and TV broadcasts.

But NBA listenership on radio keeps dropping and television, in some form, runs every game. After Covid hit last year and the NBA resumed its schedule during the summer, announcers worked remotely. But attendance restrictions took a huge chunk of teams’ revenues. So the Orlando Magic fired their radio voices prior to this season and went to a simulcast.

David Steele, the team’s TV voice who started with the Magic when they were born in 1989, does the play-by-play. David was told not to change his television-only presentation. So Steele and partner Jeff Turner caption the picture and were essentially told not to worry about radio.

I asked David about it. “We are doing a telecast that airs on radio. Jeff and i were told not to change our call. I have tried to make a few small adjustments, giving the score a bit more often and we provide a little more description than we ordinarily would, but it’s basically a TV call. As for complaints, I haven’t heard any.” Steele started with the club, doing radio and he was excellent. Before joining the Magic, he was the Voice of Gators football and basketball. Say what you’d like but it’s impossible to follow the Magic on radio. The listener has to do lots of guessing. This development could very well be a red flag for the future of radio.

Sad too, Dennis Neumann the radio announcer who lost his gig hasn’t found a new job yet.

Earlier this week on the Pacers radio pre-game show, Mark Boyle shared a heartfelt tribute to his longtime Pacers’ radio partner, Bobby Slick Leonard who passed at age 88. The one thing that Boyle learned from Slick more than anything else was that he, Mark,  could never be the great person that Leonard was or live the wonderful life that he did.

Peter Vecsey pointed out that after Leonard’s death only one member of the Lakers, Frank Selvy, is still alive of those on the January, 1960 flight that crash landed on a cornfield in Iowa. Three on the flight did broadcasting after their playing days, Hot Rod Hundley, Tommy Hawkins and Leonard.

CBS announced that Lindsay Czarniak, Allen Bestwick, Brad Daugherty and Matt Yocum will work all six races of the Superstar Racing Experience (SRX) series that it will air, bringing viewers inside the made-for-TV racing series. Czarniak will serve as host of the series. Bestwick will provide the play-by-play of each race. Daugherty, the former Cleveland Cavs’ big man, will be a roaming analyst, offering exclusive access to the inner workings of the series and showcasing the SRX experience. The first event is June 12th.

Here we go again. No announcers? There was a fuss this week after ESPN planned to run early rounds of the women’s NCAA volleyball championship without any announcers. The matches were slated for ESPN+. After some pressure, the network acceded and added commentators.

NBC Sports presents the 47th annual Bayou Classic between Southern and Grambling State this Saturday, April 17 at 2:30 p.m. ET live on NBCSN from Independence Stadium in Shreveport, La. Paul Burmeister, Anthony Herron and Lewis Johnson will be on the call.

Great stuff! I’m reminded of when Red Barber, on Game 4 of the 1947 World Series, came on in the middle of the game and said Bill Bevens had allowed no hits, and, as he put it, “the breath in Mel Allen’s throat gurgled like a country boy trying to swallow a chinaberry seed.” When Cookie Lavagetto broke up the no-hitter, Red got some flak. The next day, he went into the Yankees dugout. Bevens said what ruined things were the ten (really) walks he gave up, and manager Bucky Harris told Red that if he could actually control what… Read more »