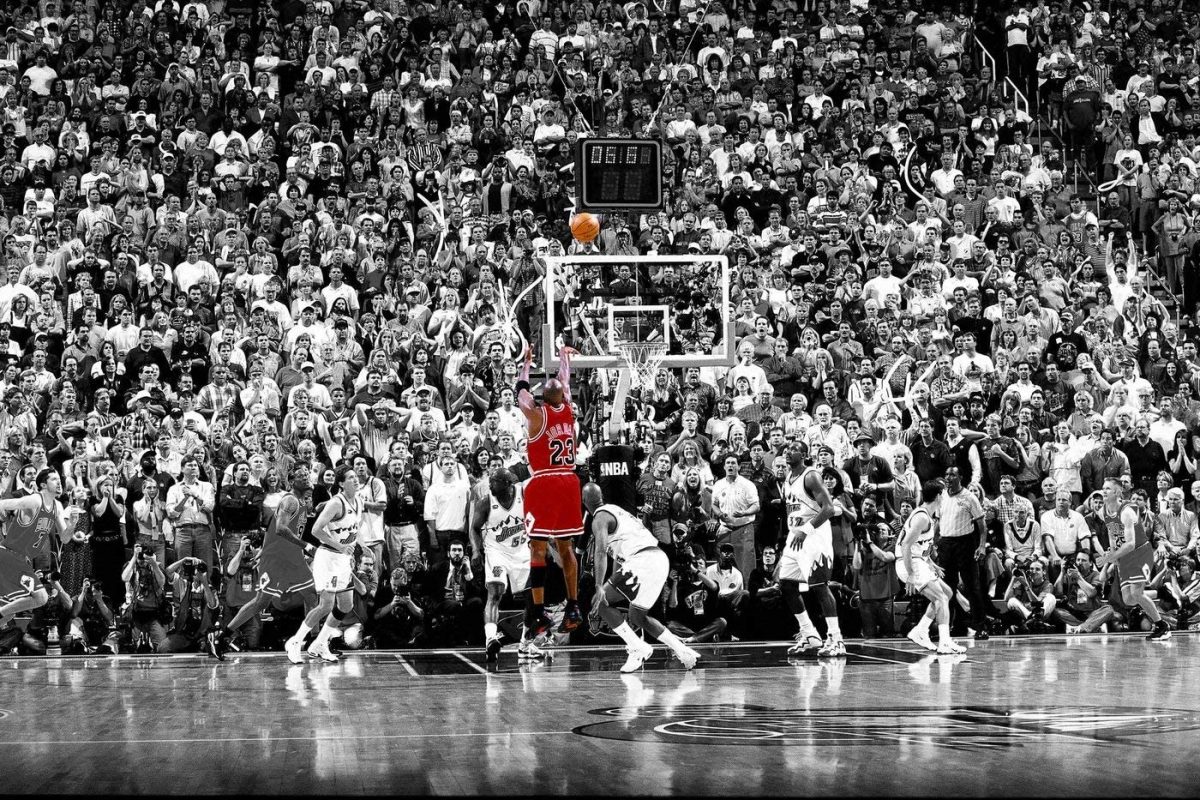 Michael Jordan's last shot in a Bulls' jersey. It beat the Jazz for the '98 title in Game #6.

I was surprised that Marv Albert was not interviewed for the The Last Dance, the smashing success on ESPN which takes viewers through Michael Jordan‘s drive to win six NBA championships. For those who didn’t keep count, Marv chronicled five of Jordan’s six titles. Marv did so when he was in his prime and when his voice was still in fine fettle. Bob Costas did the last title in 1998.

Frankly, it’s an insult to Marv who is likely to retire after the 2020-21 season. It’s also somewhat embarrassing for those who produced the series.

The Last Dance is a presentation of a consortium of ESPN Films, Netflix, NBA Entertainment and Mandalay Sports. Michael Tollin is the executive producer. While I wondered whether Jordan himself dictated who was and wasn’t to be interviewed, Tollin told Deadspin that after Jordan agreed to the documentary, Michael said to him, “You guys know what you’re doing. I’ll make myself available, but hands off.”

Tollin, a Philly native, was asked by Deadline about game #6 of the 1998 championship series, the 87-86 win over the Jazz which gave Chicago the championship. It was Jordan’s shot with five seconds left  that nailed the title. He said, “Can you imagine that 22 years later, game six of the ’98 playoffs, Michael’s last with the Bulls, remains the highest rated game in NBA Finals history?”

The producer was also asked about the Jordan title winner (to be seen in part #10). It was called by Bob Costas. “You see he’s exhausted and Costas says in the third quarter how spent Michael is and there is this montage where he misses three straight shots that hit the front rim and come up short. Finally he (Jordan) gets this extra gear and winds up with 45 points!'”

When asked yesterday about Albert’s glaring absence in the series, ESPN pointed out that the production team conducted 108 interviews and that not all were used. The network strongly suggested that by no means was Marv purposely avoided. Media figures interviewed include Bob Costas, Hannah Storm, Andrea Kremer, Mike Wilbon, Sam Smith, Rick Telander and David Aldridge.

One of the elements of The Last Dance that I believe has helped the high rating is the limited number of commercial minutes. Like the Masters, the program has just three sponsors. They are Facebook, State Farm and Reese’s.

The Bulls’ announcers who prominently covered Jordan through his years were Jim Durham, arguably the most popular Bulls announcer ever. He was with the Bulls from 1973-91, leaving after Jordan’s first title. For a chunk of those years, he presided over a TV/radio simulcast. Durham later did work for ESPN on both radio and television. Other Bulls’ radio and TV play-by-play voices those championship seasons were Tom Dore, Wayne Larrivee and Neil Funk. Red Kerr was the so-called analyst, but more of a cheerleader than anything else. He didn’t exactly break down X’s and O’s. Had a chance to catch up with the legendary Merrill Reese, a beloved figure in Philadelphia and a native son. Reese, 77, started in 1976 as a commentator on Eagles broadcasts. In December, 1977, Reese, moved over to the play-by-play chair when Charlie Swift who held the job committed suicide. Assuming, there will be a football season this fall, it will be Reese’s 44th calling the games. No NFL announcer has done any one team longer.

The one announcer Reese heard more than any other through the years is the late Bill Campbell, whom he considers the most versatile in Philly history. Campbell did the Phillies, Eagles, Warriors and 76ers. He held court on-air with a firm, room-filling, raspy voice. It was unmistakable. “He was an especially good interviewer,” Reese said. “He could put the subject at ease as well as anyone.”

“I tell young broadcasters today not to interview the way writers do in the locker room after games. They’re on deadline and they’ll say, ‘Talk to me about that final play in the third quarter.’ It puts pressure on the subject and they’re less likely to open up.” He adds, “There are so many writers turned broadcasters and not many are good interviewers.”

In addition to calling Eagles games, Reese runs an AM radio station in suburban Philadelphia. On a typical day during the football season, KYW, the all-news station in the heart of Philly, starts his day early. It calls him to provide commentary in morning drive. He then rushes over to his own suburban station and runs a sales meeting at 8AM. Then it’s down to practice where he spends time with the players.

Reese, who also did Big 5 Basketball for years, has no intention of slowing down. By my count, he’s the oldest play-by-play announcer to ever broadcast for a local team. He’ll be 78 in September.

WFAN’s Joey Wahler tells a quick story that says tons about longtime network broadcaster extraordinaire, Tom Hammond. Joey was on the road doing a college game on radio, one that Hammond himself was doing on television. The next morning, Wahler found himself a spot or two behind Hammond on line at the airport while checking in at the gate. Hammond was hoping to get on the same flight as Joey. After Hammond walked away from the gate with a disappointed look, Wahler asked him, “Tom, why didn’t you just tell the agent who you are?” Hammond shrugged off the suggestion. Tom is as good a broadcaster as he is a man. He didn’t want to take advantage of his position.

Not that there’s anything wrong with it but during the days when Brad Nessler traveled regularly for ESPN, he would carry a couple extra network T-shirts with him to hand out when needed. Brad is a good guy and a solid broadcaster too.

Al McCoy is holding up nicely. He turned 87 this past Sunday and sounds great. The longtime Voice of the Suns is closing in on 50 years with the club. Next season will be his 49th. Two of his sons are in the Phoenix area. Al’s third, Mike, is in radio and is currently doing some work for KOMA in Oklahoma City. Al’s wife passed several years ago.

Al grew up on an Iowa farm during the depression years. He told me last week, “We had food and the basics, and we were able to socialize!” Different story today. When I mentioned the name Jim Nantz, McCoy said that when the Suns would get to Houston in the 70s, the face of CBS was a student at the University of Houston and would do stats for him.

McCoy said that when he was broadcasting Drake basketball in the 50s, he first met Chick Hearn, then the broadcaster for the Baylor Bears. That had to be just before Chick headed to Los Angeles to grow his career in the mid 1950s. In his early years in Southern California, Hearn did USC football and basketball. He joined the Lakers during the playoffs of the 1960-61 season.

Al says he no longer travels to some NBA road games where the broadcast position is in the nosebleeds.

Contributor Jake Baskin passes along a couple NHL Notes. Ralph Strangis who did the Dallas Stars for 22 years is teaching broadcasting at The College of the Desert in California. He still does occasional games for the NHL Radio Network.

No one knows if the NHL will officially complete the season. If it doesn’t, hockey fans will miss the erudite call of Mike Emrick who’s scheduled to do his 14th straight Stanley Cup for NBC. Earlier in his career Doc did two Cups for ESPN in the 80s and five For Fox in the 90s.

CBS signed Charles Davis as the #2 NFL analyst behind Tony Romo. Don’t be surprised if Davis is used on other sports. He did regional studio work for Fox Sports Florida and his son played college basketball for Rollins in Orlando. Davis is comfortable covering more than just football.

I feel bad for one of the best NBA broadcasters, Brian Wheeler. Up until this season, he spent a couple decades presiding brilliantly over Blazers radio. He was scheduled to do his first NBA game for ESPN Radio the Sunday after the abrupt stoppage of play due to covid-19. Brian is special and will get another opportunity. He’s that good.

Whatever news channel I have on lately, Mark Cuban isn’t far away. He has an opinion on everything. The Mavs owner hasn’t ruled out a run for the presidency one day. Don’t underestimate him.

The Al McCoy story about Jim Nantz reminds me that Brent Musburger was a spotter for Lindsey Nelson, who was a spotter for Bill Stern. I suspect Brent has a spotter who has been or will be a big name sportscaster! Bill Campbell is an interesting story because he was on the Phillies crew, 1963-70, with By Saam and Richie Ashburn. Bill Giles came to Philadelphia from Houston and decided to bring along the #3 Astros announcer, Harry Kalas. Somebody had to go, and By was an institution, so it was Campbell. It’s ironic that, at first, Kalas wasn’t wildly… Read more »