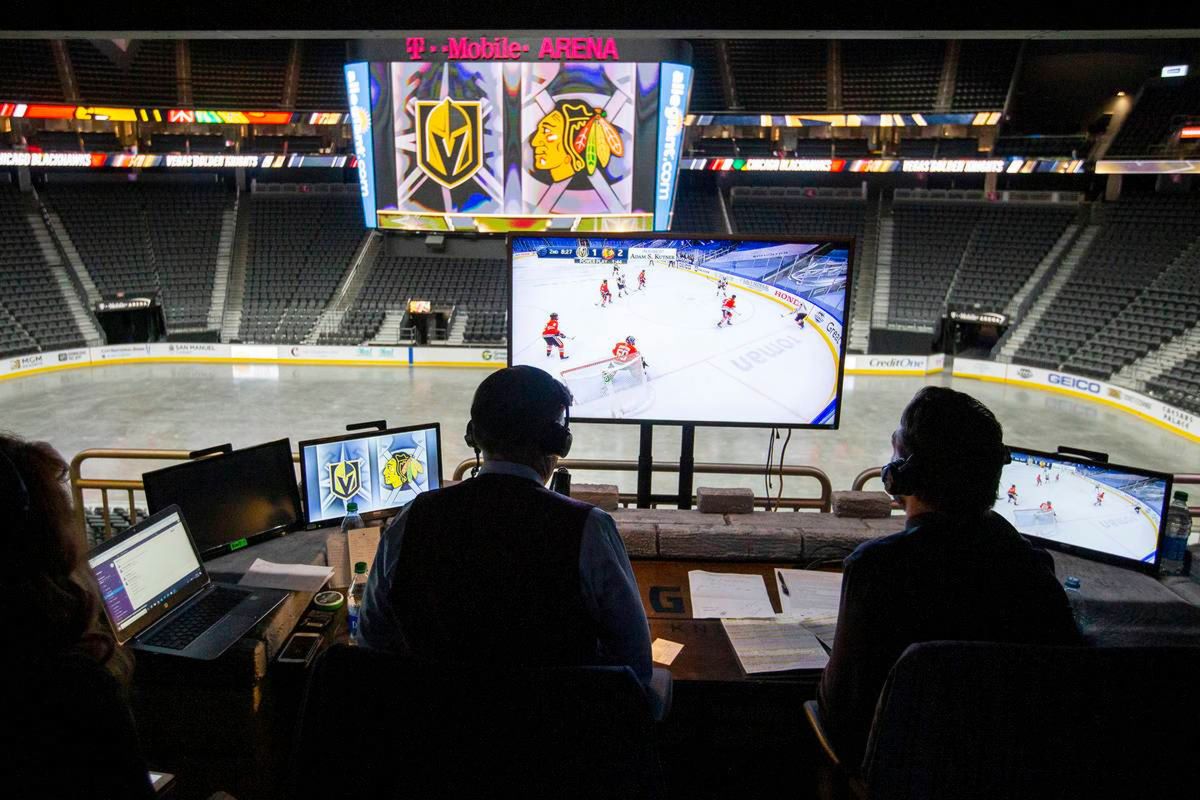 As we put a cap on the NCAA Tournament, I counted ten announce teams that have worked two or more  Final Fours since the traditional networks launched live coverage in 1969, NBC (1969-81) and CBS and/or Turner (1982-present). (ABC carried the 1962 title game by delayed tape on Wild World of Sports. From 1962-68, syndicator SNI distributed the title game broadcast to an inconsistent list of stations.)

In my view, the best three announce teams, together for two or more Final Fours, are:

Dick Enberg, Al McGuire and Billy Packer (1978-81). The trio brought it all, most importantly, novelty. No one was better than the eloquent play-by-player Enberg who stamped each game with an indelible theme that captured much of the human interest. Dick would also call games with long leashes on both his partners, Packer and McGuire. They were always going at it, debating spiritedly and humorously. The subjects were generally unpredictable to not only the audience, but to them too.

Brent Musburger, Billy Packer (1985-90). Brent’s play-by-play call has always been peppered with opinions, no matter his analyst. He kept his partners on their toes. Musburger might have been the first network play-by-play voice to freely infuse his views at any point in a broadcast. He began with CBS calling the NFL and the NBA in the 1970s. At that time, he fashioned a contrasting style from the TV pioneers who preceded him like Ray Scott, Curt Gowdy, Lindsey Nelson and Mel Allen. These icons never spewed their views.

Jim Nantz, Billy Packer (1991-2008). It will  be a long time before any duo and certainly trio earn that kind of tenure. They partnered for 28 Final Fours. While Brent took strong stands, Nantz brought a gentle hand to the microphone. But it still gave Packer lots of room to spew opinions and unleash knee-jerk reactions. In 2008, during the last tournament that Billy covered, Kansas pounced on North Carolina, 38-12, early in a semifinal game. At that point, Packer declared, “The game is over.” KU went on to win the tourney.

Criticized for the comment, Packer told USA Today, “”My job is to say what I see, not have some kind of subconscious feelings about offending anybody. It probably annoyed some people, but I don’t concern myself with having some agenda that’s contrary to what I’m seeing.”

I would have Gowdy somewhere on the top of the play-by-play list but we’re looking at broadcast teams and Curt was saddled with a weak Tommy Hawkins for four years. In retirement, Gowdy told me he considered basketball his best sport. He played it at Wyoming.

Still gnaws at me: The NCAA’s decision to genuflect to political correctness, having public address announcers in the tournament read (plead): “For those willing and able, please rise for the national anthem.” At that point, those happy to have a home in our great country likely reached for an airsickness bag.

I wish ESPN would assemble Dan Shulman, Dick Vitale and Billy Packer for one game next season. Unsure that Billy would agree. In fact, I don’t know whether he’s even attended a game since he retired in 2008. Packer and Vitale have some history. Vitale told us, “We’re just different.” Indeed, they are. Vitale said Packer is vanilla ice-cream and Billy said Dick is about himself. I would hope that they would put the animosity behind them for one night and let the opinions fly freely. Both men have contributed greatly to the popularity of the game and they’re now both in their 80s. It would be fun to hear their views at this stage of their lives.

Dick Stockton is one of the good people to preside over a microphone. The outpouring of good wishes from broadcasters and executives that followed his announced retirement last week was heartwarming. I got this note from longtime broadcaster Johnny Holliday just after the announcement: “And to think that Dick Stockton was my intern at 1010 WINS (New York) when I was playing the hits in 1964 and he was just out of Syracuse. He would bring me traffic, sports, ands weather reports and we would sometimes talk about how I managed to be a disc jockey in the Number One Market in the country at age 25….Truly one of the good guys in our business.” Holliday, 83, still does University of Maryland football and basketball on radio. Until a couple years ago, he also hosted pre and post game shows around Washington Nats telecasts.

Funny line from 6’7″ Clark Kellogg, referencing a tight game during the tournament. “The game is as snug as an airplane’s bathroom is for a man my size.”

A not so funny thing happened to the Suns radio team of Jon Bloom and Tim Kempton. (The esteemed Al McCoy, 88 later this month, does only home games. It’s his 49th year as the Voice of the Suns.) Jon and Tim suffered occupational side-effects of Covid protocols. They were calling a road game against the Heat off a monitor in a Phoenix studio. Well, the transmission failed and the two had to truly do a recreation the kind early baseball announcers Red Barber did. All they had was a stat monitor for a good chunk of the first half. Of course, all Barber had was a Western Union ticker.  So the Suns duo should appreciate what they did have. To connect the dots between changes in the score or fouls committed, Jon and Tim two had to be pretty creative.

I’m reminded that when the Warriors left Philadelphia for San Francisco in 1962, Bill King didn’t travel on most long trips. He’d have a ticker tape of sorts and someone on the phone with him in the road arena, providing choppy information. I’m sure King embraced the challenge and pulled it off. By the way, it’s infuriating to me that King has never won the Gowdy Media Award from the Naismith hall of Fame.

There are rumblings that Turner won’t re-up Chris Webber on its NBA broadcasts.

Columnist Rich Podolsky sends this along: “Helen Storey has done more for golf and marriage than anyone in a long, long time. Because she’s Lee Westwood‘s caddie and fiancé, and because they are so fun to watch together, wives are now watching golf with their husbands for the first time in years–and liking it!”

If ESPN hasn’t made enough changes to its NBA studio cast, it made another. Paul Pierce is out. The former Celtic standout posted a racy live video on Instagram that featured him in a room with exotic dancers. Th cost, he’s gone. ESPN’s Adrian Wojnarowski, nicknamed “Woj,” told Republican Senator Josh Hawley “F… you.” For that insult, Woj got a slap on the wrist. Pierce though is fired. Any consistency?

Randy Hahn, the TV Voice of the San Jose Sharks was born in Edmonton and spent his formative teen years in the Yukon. You remember the Yukon. I watched many reruns of Sergeant Preston of the Yukon when I was kid. Hahn’s first live play-by-play experience was covering the Sourdough Rendezvous dog races on Dandelion Heights, which he refers to as a “paw by paw.”

Great roundup. I think Red Barber used to say a game was as tight as a new pair of shoes on a rainy day. Clark may have topped him!

Bill King also should have had the Rozelle. Ken Korach, who did that marvelous book on him, has thought that because King was so good at all sports, he ended up not being noticed enough. I also think it’s that he didn’t do anything close to New York City.