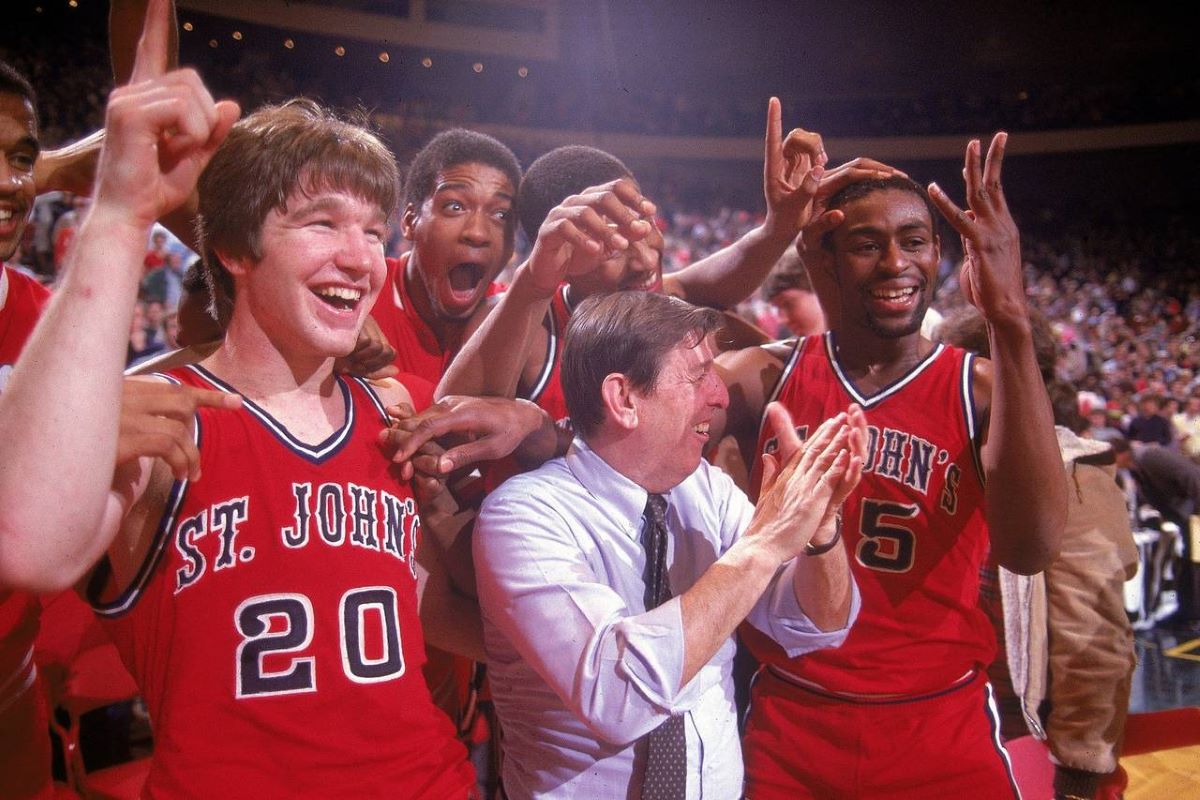 Marty Glickman and I were heading up to Hartford from Manhattan for a St. John’s – Connecticut game, He did UConn and I was calling the Johnnies. As we drove up, we  listened assiduously to another basketball game on the car radio. A number of times, the play-by-player we were listening to said, “He picks up his dribble.” I knew what was coming next. Marty bristled and bellowed a quick tutorial: “Just because one announcer says ‘picks up his dribble’ does it mean that everyone has to follow? If I’m not mistaken, the late and great Cawood Ledford used the phrase first. It was Glickman’s way of preaching what Red Barber and Vin Scully tell and told budding broadcasters, “Be yourself.”

If football, announcers now regularly use “inside the numbers” or “outside the numbers.” One voice starts it and everyone else piles on. (It might have been Kevin Harlan originally?) It’s a descriptive term. But be unique. Kevin broke an unwritten rule when he painted a pulsating picture on radio of a lunatic running on the field. That’s what makes Kevin superb. He’s resonant and he’s himself.

For 17 years, Rick Weaver did Dolphins broadcasts on radio in Miami. Many of those years, Fins’ games at home were blacked out. Radio was critical to the locals. On fumbles, Weaver used a term, “It popped out like watermelon seeds.” Use that today and you’d be thrown out of the booth by the PC police.

Red Barber  sent me to the dictionary when I was a teen, after he called an olive skinned white man,” swarthy.” I can’t imagine any announcer using swarthy today. There’s just asking for trouble from the PC gang. What a world!

I guess this falls under the heading of language. When CBS ran a game from London earlier this season, the network had the commercial billboards read by a Brit. It was a nice little pop and a unique touch.

Talking of St. John’s, Ian O’Connor had a heartwarming story on Looie in the New York Post. Say no more to New York sports fans. Looie is Lou Carnesecca, the onetime and longtime peripatetic basketball coach of St. John’s. I had the privilege to broadcast St. John’s basketball games on New York radio during the program’s golden years in the 1980s.

Nostalgia you might say. Since then, for the most part, St. John’s has suffered years of galling frustration. In the Chris Mullin years, St. John’s basketball was a constant subject of conversation. New Yorkers were not only proud of Mullin but there were others too, like Mark Jackson and Bill Wennington, a Long Islander by the way of Canada.

Ian reminisced warmly about that thrilling stretch when NY embraced college ball like never before. Carnesecca will turn 97 on Jan. 5th, and as O’Conner penned, “People joke that he will outlive the statue of his fist-swinging self that was just unveiled inside his gym.” Once Alumni Hall is named in Lou’s honor.

In my double-digit years calling Redmen hoops, I had a chance to work closely with two great St. John’s men, a duo who worked together symbiotically. Jack Kaiser, the longtime athletic director and Carnesecca the Final Four coach in 1985.

I don’t know how they would have done in a digital world when people look askance at others who speak rather than text. But I can definitively say that without Jack and Lou and Dave Gavitt, I’m not sure there would ever have been a Big East. Jack, who turned 95 in October and Lou were classmates when the school was still in Brooklyn. Carnesecca never had a losing season and his teams were always in post season. Before he was elevated to athletic director, Kaiser excelled coaching St. John’s baseball team.

O’Conner in these words asked Carnescca if he has spent time pondering his own mortality. Carnesecca says: “I pray to the Blessed Mother that she gives me the strength and courage to handle what’s coming. Of course, it goes back to your faith, you know? And it’s out of my hands. I can’t call timeout.”

Lou and his wife Mary have been married for many decades. I rarely saw her. She never showed up at games. Why? Her polite response was, “I don’t know of any wives who go to their husband’s office to watch him work.” It wasn’t that she didn’t care. She might have cared too much. She listened or watched at home where she could emote freely.

Personal computers or even flip phones weren’t born then when traditional handshake agreements sufficed. No lawyers necessary. Athletic directors and coaches generally have complicated relationships. Not those two. They just got it done. And they both have long lives to demonstrate it.

What stuns me is how John Sterling became the “Voice of the Yankees” in the first place. When I hear Suzyn Waldman intro him each broadcast, my reflex is to await the words, “Mel Allen.” There hasn’t been a Voice of the Yankees since, in my brain. How is it the Mets seem to hire sometimes brilliant (Cohen, Rose) and otherwise competent voices while the Yankees maintain mediocrity in both radio and TV broadcast booths? Lindsey Nelson, Bob Murphy and Ralph Kiner were instant NYC celebs.

I wondered whatever became of longtime NBA and MLB announcer Mel Proctor. Thanks to retired Ralph Lawler for responding:

“Mel and his wife are well and living in the San Diego area. He has written a couple of books and done work coaching young broadcasters.”

Thanks to Ralph Lawler for that update.

As for “voices,” I’m reminded of the story–Curt Smith told it in his discussion of the Braves–of Ernie Johnson telling Skip Caray, “We’re ALL the voice of the Braves,” and of course Ernie had worked with Milo Hamilton …. But when the Pirates brought back Bob Prince just before he died, Lanny Frattare said he had never called himself the voice of the Pirates and never would because Prince would always be their voice.