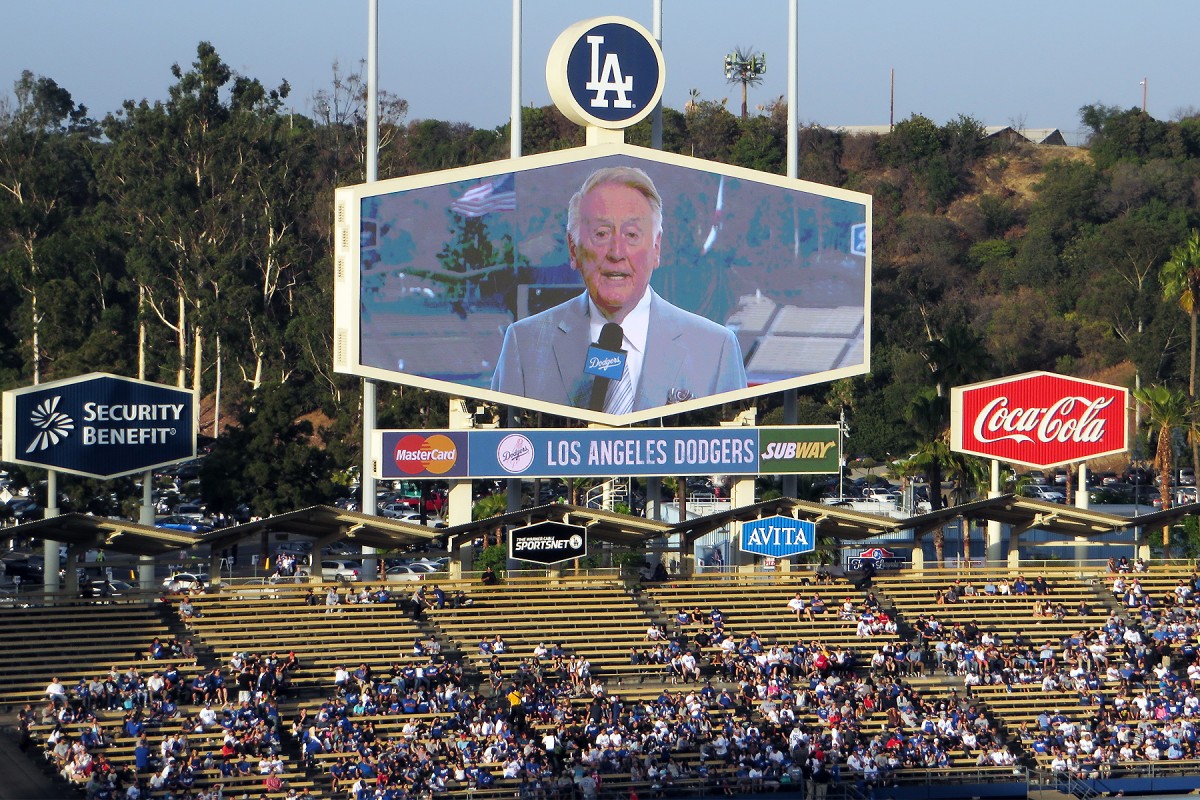 The great Scully winding up his 67 year Dodgers' career

The longtime KNX and KFWB Southern California sports reporter Ted Sobel hosted a gem of a podcast this summer. It’s a must listen.

Ted somehow managed to hook up the unmatched Vin Scully, 91, and the ex-Dodger pitcher Carl Erskine, 92. The two reminisced about their ten years together which began in 1950 when Scully was a rookie broadcaster under Red Barber. The proof is in the podcast. Both Vin and Carl are as sharp as a tack. The two men enchantingly covered their Brooklyn years and the club’s early seasons in Los Angeles. 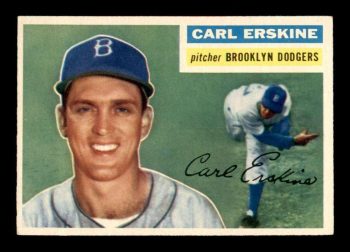 Scully shares his memories of the first of Erskine’s two no-hitters in 1952. Back then, Vin did just two innings a game.

The hour or so interview gives listeners a privileged sensation of eavesdropping on a private conversation between two fellows, both of whom traveled with Jackie Robinson, experienced the Dodgers-Yankees World Series rivalry and the transition to Los Angeles in 1958.

Erskine tells Scully that he was ordered by Dodgers’ manager Chuck Dressen to throw at Jim Davenport and Yogi Berra. After hearing it, Scully tells Erskine that Dressen was a ‘puppy of Leo Durocher.’ Draw your own conclusion.

The two nonagenarians opened up about events well over half a century ago, doing so with clarity and with unhesitating recall. Erskine sounds like he is well read. In fact, he reminds Vin on the podcast that the two visited bookshops at train stations and airline terminals, where the announcer recommended titles for him to read. Carl says that he thinks of Scully when he stumbles upon these older books in his Indiana home.

The podcast is one for the annals. The link is Ted Sboel with Vin Scully and Carl Erskine

Erskine did some broadcasting in his post playing days which is quite apparent listening to him articulate.

For those wondering, there are only three players still with us from the Brooklyn Dodgers’ 1950 team, Tommy Brown, 91, Bobby Morgan, 93, and Erskine.

Then of course there’s Scully! The Voice of Voices turns 92 on November 29th!

On radio, Vin always challenged himself to condense his calls of bang-bang plays; to use the fewest number of words without sacrificing an iota of graphic detail. He often talks about sitting next to Red Barber at a spring game in 1950 and marveling over how the veteran described a triple-play in a heartbeat. He wondered to himself at the time, whether he will ever be able do anything like it.

Over time, Vin would do it better than Red or anyone else. If budding announcers listen to Scully- Dodgers vs. Phillies and Steve Carlton in 1973 they’ll appreciate how brilliantly Vin economizes  a smash to center that skips behind the outfielder and later how a pitcher chases down a slow roller off the mound. In both cases, he keeps his description to the fewest words without missing one element of the play. An artist second to none!

For those who miss Vin during these dog days of summer, I’d suggest a fantastic video of the 2016 ceremony when Scully’s name went up in bright lights into the ring of honor at Dodger Stadium. Kevin Costner gave the keynote speech and Sandy Koufax spoke too. Koufax called Scully a poet.  Costner was marvelous. Definitely worth a view:

One of the highest praises heaped on Vin was by the gruff voiced, Tommy Lasorda. Asked what made Vin special, he simply said “He knows and loves the game.” How true. Indeed, Scully never needed a color man.

Vin’s love and respect for the late Ernie Harwell is best manifested by the exalting praise he paid him. Remember, Scully was hired by the Dodgers in 1950 when Ernie left Brooklyn for the Polo Grounds and lead announcer Russ Hodges. Vin said “I didn’t take Ernie’s chair, I just sat in it.”

For those who missed it, there was disheartening news that surfaced in Detroit this spring. Apparently, for years, there’s been some major in-fighting and finger-pointing among the Harwell children. It covered the Harwell estate and moneys earmarked for late in life care for Ernie’s wife Lulu. She suffered from dementia. In the end, Lulu was essentially broke.

Not a pretty story. One of the kids blames one of the two lawyers. It got so bad that one of Ernie and Lulu’s daughters was prohibited by the probate judge from visiting her own mother. One son, a Florida based minister, was charging Lulu to visit her once a month. Another son, who had filed for bankruptcy three times, had borrowed tons from Ernie during his dad’s life. The feeling was that Ernie and Lulu just couldn’t say no to their kids. Forbes and the Detroit Free Press wrote about the sad state of affairs.

In May 2012, Probate Judge Kathleen Ryan blurted this: “I’m going to tell you right now, and this is with no uncertainty, and every single Harwell child needs to listen up and listen good. The gravy train is absolutely over. You will not get one dime. I’m not allowing any gifts, payments or anything. Go get a job and take care of yourself. I am purely appalled that you children would do something like this to the most well-loved and beloved couple in metro Detroit … this is appalling.” Oy!

Ernie never made big money himself, yet in his later years was able to cash in on appearances and serving as a corporate spokesperson.

Mitch Albom: Ernie and Lulu Harwell get a second honeymoon — in heaven

Boog Sciambi is developing into one of baseball’s top TV play-by-play voices. As I looked at the schedule this week, I noted that he’s working two telecasts and one radiocast. He’s earned these growing assignments because of his insightful, unforced and neighborly work in the booth.

The network is showing good taste and progressive thinking by recognizing Sciambi’s unique and independent style, one that might attract younger baseball fans to the set. Boog continues to fashion an evolving play-by-play role; one that’s open, informational and conversational. He’s self-assured but self-deprecating, he’s focused on the game but can wander off humorously and unpredictably.

When we talked this season, he said, “You can’t call a game now the way they did 50 years ago. Those viewers and listeners are fading.” So Boog spices things up by sprinkling in references to pop culture, yet never leaves viewers or listeners guessing about what’s happening on the field.

Although Boog never said anything detrimental or judgmental about any past partners at previous stops or for that matter even raised their names, it’s unlikely he was influenced in style by his Marlins’ partner of four years, the sepulchral voiced Dave Van Horne, a HOF Ford Frick winner whose stentorian sound can still shatter glass at 80.

In my view, Van Horne is still current but there are those who believe that Dave’s style is anachronistic, redolent of the 1960s, and perhaps not what’s required in 2019 to attract younger fans. Ultimately, Derek Jeter will make that decision. The iconic ex-Yankee and current Marlins boss has already uprooted the team’s TV booth. Dave was popular in Montreal, starting with the Expos when they were born in 1969. This is his 51st year in baseball.

At a quiet moment the powers that be at ESPN might regret appointing Matt Vasgersian the rigid and flat play caller on Sunday nights who often sounds like he’s presiding over a soporific. Goodness! Sciambi brings so much more life and pizzazz in midweek than this gun for hire brings on weekends.

The club announced that Marty Brennaman will be the first broadcaster to be inducted into the Reds Hall of Fame. The ceremony will take place next April. Meanwhile, the team has designated this September as the Month of Marty.

He will get quite a sendoff. There will be giveaway nights including one where fans will receive replica tickets of April 4th 1974, the date of Marty’s first regular season broadcast. At another game this month, Reds transistor radios will be given to patrons. Throughout the month, Marty will absorb the warmth of the fans, visiting assigned concourses during appointed times.  A temporary broadcast booth will also be set up in the stands for one game so that Marty can broadcast  from there.

All well deserved. The Frick HOFer has meant tons to the team and the community. He will remain a Reds ambassador beginning next season.

What a great roundup, and I need to listen to that podcast. I suspect they told the story of the “Fives” in one of Erskine’s World Series victories, but it will be great. To be fair, a lot of great managers told pitchers to throw at people. And some of the pitchers didn’t need much encouragement, come to think of it. Vin was incredible to listen to, not merely for calling the plays so well but being so literate and literary in doing it. And I thought of a story he told in a tribute to Red Barber (I think… Read more »