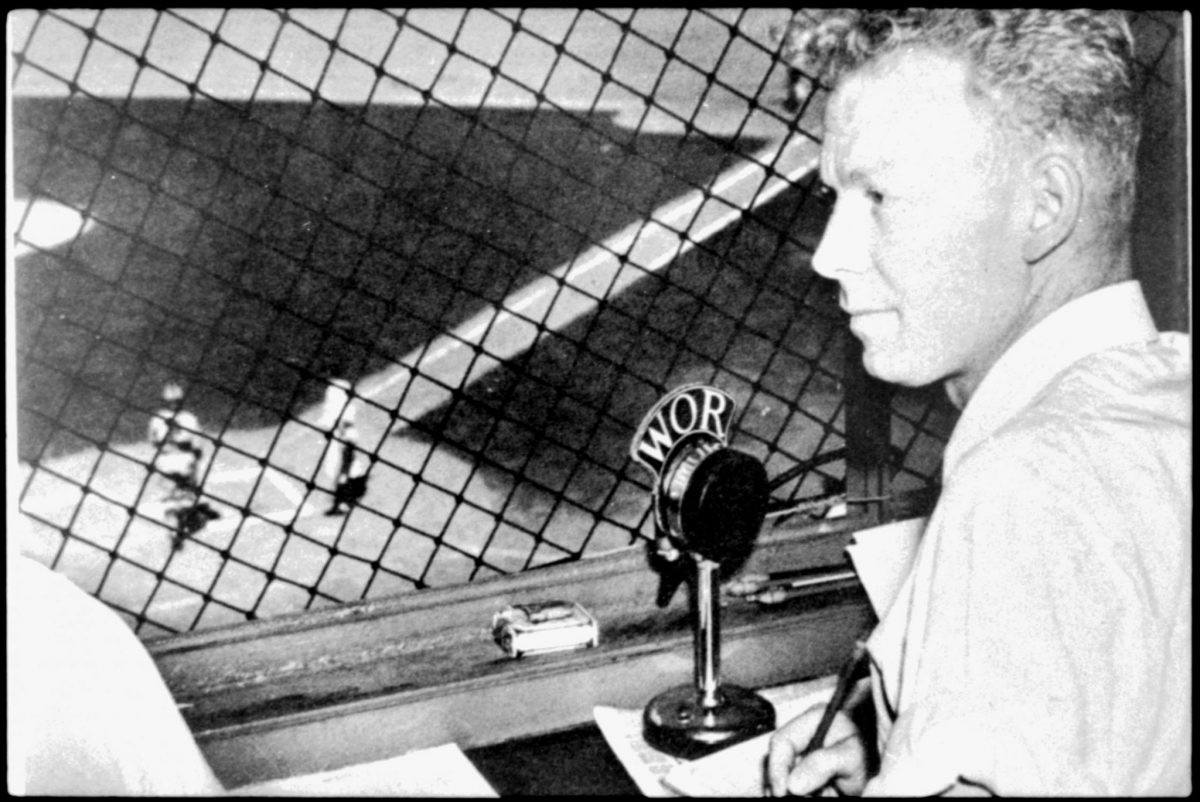 Pioneer baseball broadcaster Red Barber in the booth, circa 1940 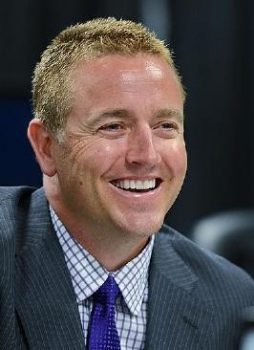 Kirk Herbstreit rambles after every play, talking for the sake of talking. More often than not, he spews inanities and repeats the elementary that viewers just saw!

Moreover, Herbstreit emits no passion, joy or anger. He’s monotone. If his pants were burning, he wouldn’t yell fire. He would professorially report on a conflagration that has consumed his trousers.

Herbstreit is bright but I sometimes think he’s a cross between a robot and Mister Rogers.

After an Oregon score: “Let’s see how Utah responds.”

Is that why ESPN pays you the big bucks? Astute, trenchant and insightful? No.

“That flag came in after the play.”

Really, we just saw that, Kirk, this second. ESPN’s director in the truck made sure of it.

“Look at these jerseys running around.”

What does that mean? Isn’t that what they always do?

“The Ducks came up with another stop and get great field position.”

When announcers use words that I don’t know, I often look them up. I started doing so as a young teenager and still do so today.

Dick Enberg once used the word prestidigitation for a player who was agile and crafty. He described Don Shula as lantern-jawed. He called a pacing basketball coach as peripatetic. Marty Glickman used phlegmatic to describe a sluggish looking player. One night when a team appeared listless, Glickman used the word torpid. Mets announcer Bob Murphy painted wispy clouds as cirrus. Bob had some meteorological training in the military.

I had to be 13 or 14 when I heard Red Barber reference an olive-skinned Caucasian as swarthy on a Yankee telecast. I had never heard the word so I looked it up. Webster: ‘of a dark color, complexion, or cast.’ Would Red use swarthy today? If he innocently did, I suspect someone would blow the whistle on him.

The world has changed. When I was in high school in the late 1960s, I looked for summer jobs in the employment section of the New York Times. They were cataloged, Men Wanted and Women Wanted. United Airlines flew hourly from LaGuardia to Chicago. For a time, the 5pm flight was men only. And yes, the Mets, Yankees and many other teams had promotional specials on Ladies Day.

Talking of Red Barber, you might want to listen to a fascinating interview with him that was done just after the pioneer broadcaster was fired by the Yankees in September, 1966. Stewart Klein, later a popular movie critic on New York television worked at the time for WNEW Radio and conducted the interview.

Barber struggled to get along with his boothmates in the Bronx, Phil Rizzuto, Jerry Coleman and particularly, Joe Garagiola. Red opens up about his baseball broadcast experience in the interview and references Garagiola unkindly.

The Yankees were then owned by CBS and Michael Burke was running the club. It was he who fired Red with a week or so remaining in the ’66 season. The club though allowed Barber to go to Washington for his final broadcasts. But the games there were rained out so Red never had an opportunity to end his long New York stay with a formal valedictory.

Klein recorded his talk with Barber in the announcer’s hotel room at the Shoreham in D.C. The interview gives listeners a clear appreciation of Red and his storytelling ability. Excellent stuff.

Just a week earlier, the Yankees had a meaningless makeup afternoon game against the White Sox in the Bronx. Neither team was going anywhere and it rained much of the morning. Those who gave the game any thought figured it would be called.

But it was played under bleak conditions at the old, old Yankee Stadium which seated over 60,000. But only 413 patrons showed up, a gathering not a crowd.

Barber asked the WPIX-TV director to take a shot of the empty and vast stadium but he was turned down. Red felt that his unbiased journalistic instincts were compromised and later went on record suggesting that the request was the reason for his undoing.

Garagiola who stayed on for another Yankee season before working fulltime for NBC, said that Barber was overly demanding and couldn’t get along with his boothmates. As for Barber’s camera request, Garagiola emptied his emotions: “Red Barber makes such a brouhaha wanting to get the cameras to show the empty seats and all the propaganda that he puts out. I said on-air, ‘There are more people going to confession at St. Patrick’s than there are people at the ballpark.’ That’s a pretty good put-down. Mike Burke never said a word!” Interview link is below.

Dick Enberg was asked how he came up with his patented expression “Oh My.” Dick said that he heard it growing up in the Midwest. He’d be in a checkout line at a retailer and one woman would share a piece of gossip with another and the response was “Oh My!”

I recently listened to the only live recording of the Warriors’ Wilt Camberlain’s 100 point game on March 2, 1962 against the Knicks in Hershey, Pennsylvania. The Knicks didn’t have a radio package much of that season. Bill Campbell, the husky voiced and legendary Philadelphia broadcaster did the game for his Philadelphia audience. Bill did the play-by-play. There was no TV. Frick winner and Phillies announcer By Saam did color.

During a time-out late in the game as Chamberlain was closing in on the milestone number, Bill shared a story about witnessing an arm-wrestling match between football great Jim Brown and Wilt. Brown won.

Suspense is growing as to who’ll be voted the 2020 Ford Frick Winner. It’s a star-studded ballot. The Baseball Hall of Fame announces the winner 12 noon ET on Wednesday.

Congrats to one of the best, Tim Brando, a native Louisianan who receives the inaugural Louisiana Sports Hall of Fame Ambassador Award. He will be part of the Hall’s Class of 2020 enshrined next June. Brando, has been with Fox Sports since 2014. Through the years, he’s been a studio host and play-by-play announcer for ESPN, CBS, Raycom/Jefferson Broadcasting, Sirius/XM, and Turner Broadcasting. Brando and Spencer Tillman were missed this past weekend on the conference finals broadcasts.

In the words of Vin Scully, it is interesting to note that we are coming up on the anniversary (Dec. 17, 1964) of the Yankees introducing Joe Garagiola as the newest member of the broadcast team, joining Phil Rizzuto, Jerry Coleman and Barber. What is also interesting is that in the Nov. 30, 1964 edition of the NY Times, TV critic Jack Gould quoted Ralph Houk, who was interviewed the night before by WABC-TV’s Howard Cosell, as saying “it was not yet certain whether Mel Allen would be retained or fired as Yankee announcer but gave assurances that he would… Read more »

Oh, what a great quote! Considering they never told Mel why they fired him, I’d say that Houk pretty well fit the description that Jim Bouton had of him as an executive.

Reading about Red Barber, I learned the word “concomitant,” and fell in love with it. His protege trotted out a classic, and it was with Red’s old, um, friend, Garagiola. I heard this, and it was beautiful. NBC Game of the Week, 1988, featuring the Dodgers. Garagiola asks about the impact of Kirk Gibson on the team. Vin replies that Gibson has brought a football mentality to the Dodgers and mentions that of course he and Joe have been in baseball locker rooms, and it’s so “relaxed,” with people listening to music and playing card. Then Vin asks, “Have you… Read more »

That interview with Barber was fascinating, in part because it was so clearly from another time where an interviewee could talk for about three minutes in answer to a question. I know it’s been heard before, because Bob Edwards referred to it in his lovely book on Red.