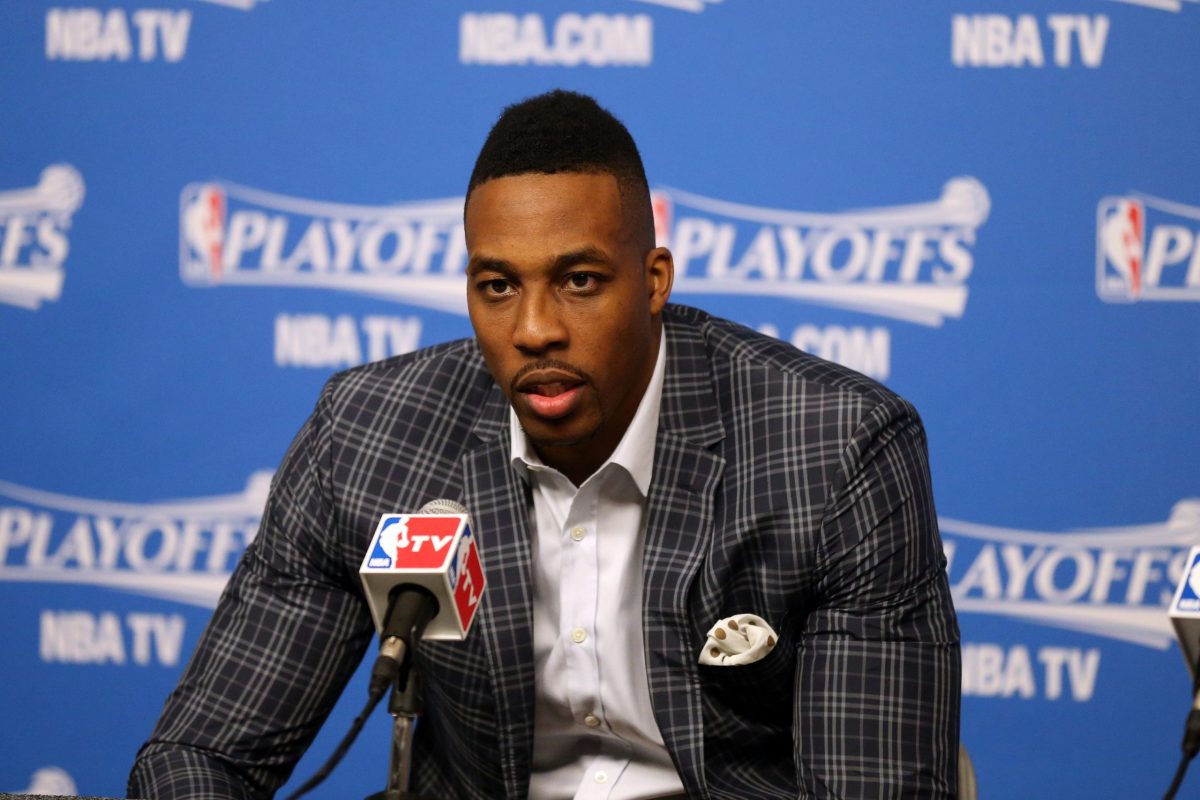 Dwight Howard on the stage answering questions from the media.

A Novel PR Tutorial: Lessons From Sports On Television

Even though they were not meant as PR 101 tutorials, the telecasts of the Tokyo Olympics, Major League Baseball, pressers after the game or using athletes as TV publicity spokespeople. Sports in 2021 have provided valuable lessons for PR people – those interested in careers in sports promotion or sports public relations.

The Hype: Prior to the beginning of the Olympics, the games were hyped by TV commentators as the Simone Biles show, because of her previous dominance in gymnastics.

The Situation:  When Ms. Biles benched herself because she felt mentally inadequate to compete, the gymnastic analysts had to develop a new story line.

The Lesson: Never build a story line around a development over which you have no control. The savvy PR person must always have a back-up plan.

More Hype: NBC announcers played up the camaraderie of athletes, albeit they were competing in the same event, which is in keeping with the International Olympic Committee’s story line of “understanding through sports” (even though a look back at Olympics history shows that isn’t true because Muslim athletes refused to compete against Israelis).

Another Situation:  Despite the “feel good stories,” there were many actions taken by athletes that were controversial, something NBC ignored: Swimmers questioned whether they were competing in drug free events; protests by American athletes regarding racial matters; permitting an accused Iranian terrorist to compete; an athlete seeking asylum because she feared going back to her country after criticizing her coaches; two Chinese cyclists wearing pins with a silhouette of Mao Zedong Mao, known as Chairman Mao, the founding father of the People’s Republic of China on the medal platform, and China’s criticism of NBC for what the Chinese said was an incomplete map of China, shown during the Opening Ceremony of the games.

The Lesson: Don’t hide the news under the carpet NBC acted as many corporations do, attempting to hide bad news, especially during PR crisis situations. But as is the norm in most situations like this, it doesn’t work. The controversies were reported by print pubs and other TV outlets. Bad news should be made public. Attempting to hide it, by any business, especially one in the news business like NBC, will make the situation worse by giving the appearances of a cover-up.

The Hype: Commentators  for certain teams pre-anoint certain players as “stars” prior to the beginning of the season, and continue so during the season. Of course it’s only a matter of time before slumping “stars” live up to the hype. The New York Mets TV announcing team of Ron Darling, Keith Hernandez and Gary Cohen, arguably the best in the business, was guilty of this until it was obvious that the slumping “stars” would remain slumping “stars.” As the season waned.

The Situation:  The over-hyping of a team was especially evident to viewers of the Mets this season. The announcers kept saying it was only a matter of time before the slumping players lived up to the stats on their baseball cards. They didn’t and the Mets finished in third placed in the National League East and did not qualify for the playoffs.

The Lesson: In my opinion, PR people should not become “homers,” like many TV sports commentators, and become overly enthusiastic about their clients. Doing so can result in unrealistic thinking when drafting a program or pitching a story, which is a sure route to failure. As a former journalist and editor, I know that reporters do not look favorably on overly enthusiastic PR people who try to convince a reporter why they should do a story. The best way to achieve success with the media is to present them with pitches based on facts that have been verified and will hold up if journalists investigate before committing.

After the game pressers

The Hype: Holding TV pressers  after a defeat gives the appearance of teams and players who are open and transparent with the media.

The Situation:  Ballplayers and managers are required to answer media questions after every baseball game. Regardless of the situation those being interviewed never blame others teammates for defeats, even when others players were responsible for the outcome.

The Lesson: Pointing fingers at others during a presser or interview should never be done. Doing so only will result in negative “he said, she said” coverage. Examples: BP (Oil) when it tried to finger other companies for its 2010 Deepwater Horizon oil spill in the Gulf of Mexico. It resulted in dueling press releases between BP and the companies it tried to blame. Similarly, Boeing tried to blame pilot error for its plane crashes. It backfired. Beleaguered sports clients, facing questions from the media should be prepped by PR people for the Gotcha questions.

The Situation: Naomi Osaka’s refusal to do media interviews on TV and many athletes who speak out about political situations highlight several problems for sponsors that sign athletes to lucrative promotional deals, hoping that their products will gain national and worldwide attention when the athlete is interviewed on TV. 1) Unlike the past, when athlete’s earnings weren’t as great, sponsors can no longer control athletes’ actions; 2) Corporations try to stay clear of political controversies, but many of the athletes they sponsor go public with their beliefs, and 3) The products that consumers buy might be affected by sponsored-athletes political actions.

The Lesson: Athletes do not make the best product publicity spokespersons for several reasons: 1) The popular ones have several different sponsors making it difficult for a reporter to plug the product; 2) Interviewers will concentrate on the athlete’s achievements and client message points will not be included, and 3) Sponsors of athletes hope that their products will be recognized by television audiences during media interviews or during a competition. But the probability of an audience watching a game or listening to an interview and viewers tying the situation to a product that the athlete is wearing is insignificant. That’s why most athlete hawkers appear in TV commercials during sporting events.

Opinion: In order to get meaningful publicity, brands should think out-of-the box and consider non-athlete experts as spokespersons who could result in more than just sports coverage.