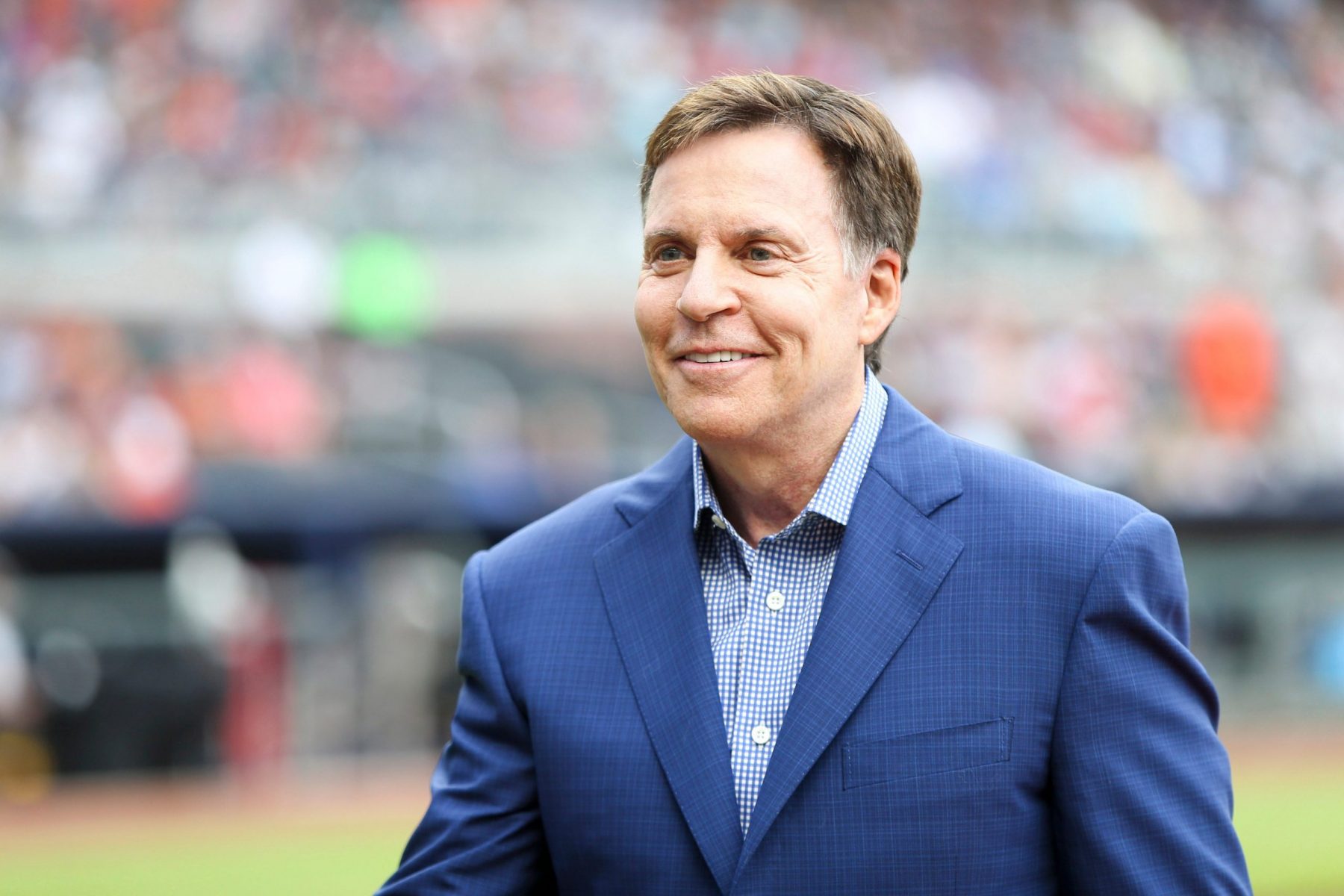 Today, Bob Costas turns 70. Below, we continue our series of profiles of past and present broadcasters by Curt Smith: to USA Today, “the voice of authority in baseball broadcasting.”

On Tuesday, March 22, Bob Costas celebrates his 70th birthday—unsurprising, given the length and breadth of his career; quite surprising, since he looks and sounds at least a decade younger. More improbable is that perhaps baseball’s most identifiable Voice is not slated to announce the pastime this year on any of its major TV networks—ESPN, Fox, or TBS.

This sad state of affairs says far more about baseball than him. Except for baseball’s in-house MLB Network, for which Bob does play-by-play, the sport seems clueless about its core, as if thinking the game means launch velocity and numbing variants of a fill-in-the-number seam curve. By contrast, Costas grasps that baseball is not a pitcher-catcher seminar, a cure for insomnia—but is, has always been, a story-telling game.

Like Vin Scully, who likened announcers mouthing a slew of numbers to a “a drunk using a lamppost for support, not illumination,” Bob’s appeal springs from grasping baseball’s core. “It’s quirky,” Costas has said. “Tell us what you did today. Tell me about the guy sitting down at the end of the dugout. Is he a character? Does he come from some tiny town in Arkansas? Did he always dream of being a big leaguer?” It’s conversation, as requisite now as when radio baseball debuted in 1921.

Longtime Pirates Voice Rosey Rowswell mused, “It’s not just play-by-play that matters. It’s what said between the pitches that counts.” Harry Caray noted that a 2-1 squeaker differed from a 20-1 rout: “Sometimes the game speaks for itself; other times you have to speak for the game.” Costas has shown this as well as the mic men he grew up hearing: like millions, listening to Harry and Vin and Mel Allen and Ernie Harwell, somehow feeling that you and they were first-name friends.

Raised on Long Island, Bob followed baseball by radio, or black and white TV. At five, he went with dad John to Ebbets Field. “I walk in,” Bob said, “and see this green diamond, like the Emerald City.” Two years later, he sat with a cousin at Yankee Stadium. Each inning they crept closer, like Dorothy spying Oz. In 1960, his clan left for California, radio its escort. “In Ohio, we’d pick up Waite Hoyt, later [Milwaukee’s] Earl Gillespie, [St. Louis’s] Jack Buck and Harry.” Nevada spawned Scully. “Dad said, ‘That’s the Dodgers. We’re almost there.’”

The Yankees in that World Series made LA seem like home. Bill Mazeroski’s Game 7 blast retired Bob to his room, eyes welling, “as I take a vow not to speak until [1961’s] opening day.” He kept mute for a day “protesting that injustice.” A greater bug was Dad, betting a great deal daily. Returning East, Bob got nightly scores in pop’s car for him by turning the dial: “calibrating it like a safecracker.” If his father’s teams were losing, Costas stayed in the car. “Winning, I’d race inside to tell Dad what was happening.” 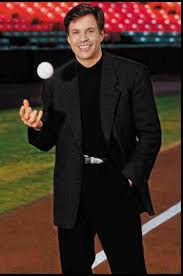 Happening was rapport, even love, baseball’s Voices drawing the Baby Boomer to the game, Bob “falling asleep with a transistor under the pillow.” Many nights his idol, No. 7, starred. Into the 1980s Costas carried a dog-eared 1958 Mickey Mantle All-Star card in his wallet, saying “I believe you should carry a religious artifact with you at all times.” By then, he moved on from Syracuse University, worked at KMOX St. Louis, and joined NBC, where he called the 1982-89 backup—Scully did the primary—Game of the Week

Bob’s tiara was June 23, 1984’s Cubs-Cardinals Game from Wrigley Field. Down, 9-3, the Cubs rallied, Ryne Sandberg homering twice to the “identical spot. The same fan could have caught it,” Bob said of the second blast. “That’s the real Roy Hobbs [the film The Natural had just been released] because this can’t be happening! … We’re sitting here, and it doesn’t make any difference it’s 1984 or ’54—just freeze this and don’t change a thing!” The Cubs wouldn’t, winning, 12,-11, in 11 innings, before a laryngitis-vexed 38,079 full house. (Younger Costas where he loves it, the ballpark)

The “Sandberg Game” is still the match to which Costas is most tied. Then, in 1988, he showed why no network treated a sport with more respect than NBC did ’80s baseball. On October 15, Kirk Gibson jaw-dropped his ninth-inning thunderbolt to edge Oakland, 5-4, in the World Series opener. NBC’s next-day pre-game likened him to Robert Redford as Hobbs. Two network producers got that film, “stayed up all night at Paramount Studios, then took our piece by police escort to Dodger Stadium,” said Costas, ad-libbing script by air-time. “Look at that and tell me what’s wrong with baseball on TV when it’s done by people who care.”

The problem was that baseball’s hierarchy didn’t. In December 1988 Commissioner Peter Ueberroth announced that CBS TV had paid $1.04 billion for 1990-93 big-league exclusivity, ending Game, sport’s longest-running TV series. “Ueberroth could ‘a kept us and another network,” mused the Peacocks’ Costas, “but he cared more about cash.” Under the deal, CBS, prizing baseball’s postseason more than Game, would carry no more than 16 sets in the regular season’s 26 weeks. No longer would Saturday hinge, as Scully said, “on pull[ing] up a chair.”

Baseball fantasized that cable could supplant network TV as its carrier: an absurdity. Ratings were so morbid that CBS couldn’t wait to end the pact, leading to NBC/ABC’s 1994-1995 “The Baseball Network [TBN] that” began in July, sans day or national exposure. Since then, baseball’s TV status has worsened. This year even ESPN slashed its regular-season schedule. According to Gallup, baseball has become the third most popular sport. Out of network sight, baseball has increasingly been out of mind.

Under the law of unintended consequences, Costas survived Game’s loss better. He shared 1995 Series play-by-play with Al Michaels, did NBC’s 1997 and 1999 Fall Classic, and nearly retired the National Sports Media Association Sportscaster of the Year award, winning it eight times. He also hosted HBO’s On the Record and Costas Now and transcended sports by airing NBC’s Later With Bob Costas. Bob has broadcast 12 Olympic Games and won 26 Emmy Awards. Still, with only Jon Miller’s ESPN, Joe Buck’s Fox, and TBS then doing network ball, for a time his baseball connection dimmed.

Then, in 2009, the first 24/7 baseball network debuted. Leaving HBO, Costas joined the new MLB Network, enthused about his programming: “historical pieces, documentary-style programming, interviews, and play-by-play—all baseball,” going back to Bob’s future. His amalgam combined what baseball could dearly use now: Be informed, have a fine voice, use humor, command of English, and knowledge of baseball lore to tell a tale, remain wearable, make ’em laugh—and for God’s sake don’t statistic your audience to death.

MLB Network’s first rehearsal occurred December 27, 2008. Four days later it debuted with an episode of Hot Stove, followed by the original telecast of Don Larsen’s Perfect Game v. Brooklyn in the 1956 World Series. Like most, Costas had never seen the broadcast, interviewing Larsen and catcher Yogi Berra in studio through the show. He hosted the documentary MLB Network Presents, voiced MLB Network Showcase, graced MLB Tonight, and gave the network sheen. Its problem is that cable’s exposure is a fraction of a major network’s.

At one time or another on MLB, you might hear Costas recall Yankees Voice Phil Rizzuto. Probing Scooter’s unique way of keeping score, Bob saw a slash bespoke a “K.” “WW” seemed to mean a single and sacrifice. Puzzled, Bob said, “I’ve seen a lot of ways to keep score. What’s ‘WW’?” Rizzuto: “Wasn’t watching.” In another game, he might compare Russ Hodges’s famed call of the 1951 Giants-Dodgers playoff v. Liberty Broadcasting System’s Gordon McLendon’s, which began, “From the bay of Tokyo to the tip of Land’s End, this is the day!” Hearing his tape, Costas the historian laughed, “McLendon’s roaring from the first pitch!”

Turning 70, Bob shows that age, after all, is relative, a matter less of date than spirit. I once wrote speeches for former Texas Governor and then-Presidential candidate John B. Connally, who, discussing this, observed that “Some people are great at 70. Some are no good at 30.” I was 29 at the time, hoping he wasn’t referring to me. Surely, like a billiards shot, the Costas style still caroms seamlessly from anecdote to aside to ball or strike: a timeless index of his ability.

Seldom was that clearer than when Costas received the 2018 National Baseball Hall of Fame and Museum Ford C. Frick Award at Cooperstown for “broadcast excellence,” evoking how at age 10 he had been “good-field, no-hit [in Little League], and you know about guys who can’t even hit their weight. That was true of me, and I weighed 118 pounds.”

Ultimately, Bob turned wistful, saying, “For me, baseball has always come first. And so … this day [July 28], and this honor, will always come first, too.” His tour de force of an induction speech suggested why it is inane for a major network not to use his play-by-play—and why he could lend the verve, art, and above all stature, that baseball on TV so desperately needs.

Costas grew up feeling that baseball was all-important. Today its network TV picture is broken—as Shakespeare wrote, reflecting “shallows and miseries”: a sport too often in a boat without an oar. Bob is not a panacea, but his presence would be a good first step. He should be back where he belongs—with us.

I say this as a fan of Joe Davis, who I think has been an excellent successor to Vin on the TV side (and is better on Dodger telecasts than he is on Fox): Fox should hire Costas to do baseball. My bet is that he would love to do it, and Fox would reap a lot of rewards.

I also honor Costas for the fact that when the opportunity arose for him to do baseball for MLB Network, he did so when he could have had more lucrative gigs, and he stayed there after NBC knifed him.

I am pleased to say that I “discovered” Bob when he was interviewed between periods by Eli Gold when the former was the play-by-play voice of the North American Hockey League’s Syracuse Blazers and the latter was the play-by-play voice of the NAHL’s Long Island Cougars back in say 1974. Both went in very different directions with Eli doing some hockey but with his voice best known for Alabama football and NASCAR. PS The league also produced one Lee “Hacksaw” Hamilton who was then the voice of the NAHL’s Mohawk Valley (Clinton/Utica) Comets, likely before he was so nicknamed.