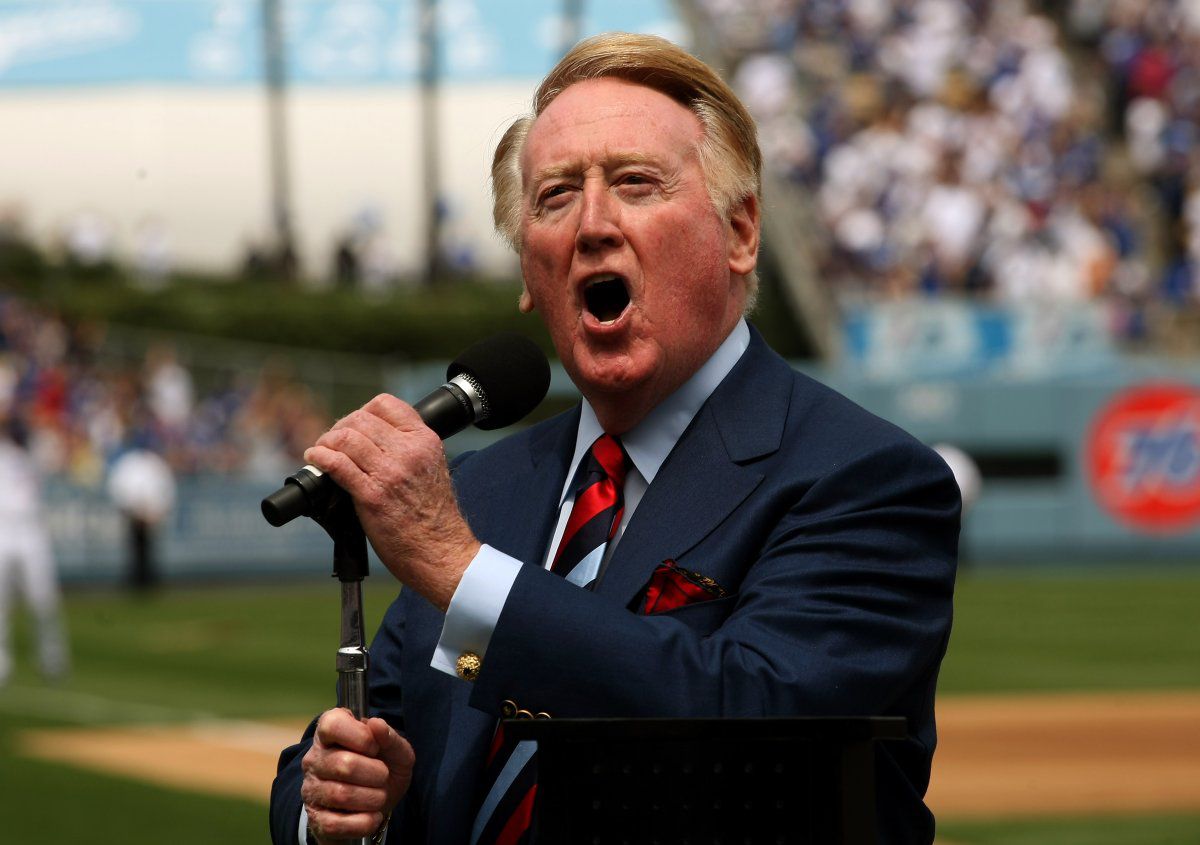 GOAT (Greatest of all-time) is left for the very, very special, from Babe Ruth to Michael Jordan, from Wayne Gretzky to Tom Brady and from Red Smith to Bob Costas. They’re unequaled at their specialties. Baseball to basketball, hockey to football and sportswriter to studio host.

As we look back at play-by-players during this 100th anniversary year of broadcasting, there’s one exceptionally best, Vincent Edward Scully, born November  29, 1927, 94 years ago today.

A product of the Roaring 20s and raised during the depression, Scully emerged as a star of the greatest generation. He was not one to share his political views on-air, yet you can bet that on D-Day he would initiate a salute to the troops who gave their lives during World War II.

Scully’s colleagues, past and present, singularly labeled him peerless. One Ford Frick Fame winner suggested to me that the Hall of Fame broadcast award should be retitled in Vin Scully’s exalted name. “No one has done it better,” he said. Ford Frick, was a reporter and broadcaster before moving into MLB administration. Frick became president of the National League in 1935 and commissioner in 1951.

A couple years ago, I asked Scully, a voracious reader as you’d expect, what he had on his stack of books. He paused for a moment, likely having to choose among the finest texts. “There’s one that sticks to me today. It’s by Bill Bryson. One Summer America, 1927. I immediately swallowed it up. We have a copy here at home and it’s always off the shelf. Every now and then I’ll pick at it like a piece of cake.

“Maybe I was attracted to it because it was the year I was born.” It’s a history book published by Doubleday about the news-filled summer of 1927, the famed Lindbergh transatlantic flight, the Great Mississippi Flood and yes, the 1927 Yankees.

Vin’s gone through a tough year, losing his wife Sandy and putting up with nagging ailments himself.

If we list all his great moments, we’d run out of time and the equivalent of lots of paper.

Yet  let me take a stab at it:

1949 – Graduates Fordham University, sends out his resume to a ton of radio stations and goes to work for WTOP in Washington. In the fall of ’49, Red Barber, Director of Sports for CBS, hires him to cover a college football game where he sparkles.

1950 – He’s hired by the Dodgers’ Branch Rickey and Red Barber at a precocious 22. Vin works at first with Red and Connie Desmond. Vin later said that Red treated him like a son that he never had and Connie looked after him like a big brother.

1953–  Asked by sponsor Gillette to call the Yankees-Dodgers World Series on TV, Barber insisted on a raise above the $200 standard fee. Gillette refused and the Dodgers owner O’Malley wouldn’t intervene. Scully gets the call and is on national television at 25. Barber ends his association with the Dodgers. Scully becomes the de-facto Voice of the Dodgers in 1954.

1956 – Scully presides over the World Series’ first and only ever perfect game, hurled by the Yanks’ Don Larsen.

1958 –  Dodgers arrive in Los Angeles. Instead of using three voices as they did in Brooklyn, the Dodgers minimized television and invited only Scully and one of his partners Jerry Doggett to come with them. The team did only the 11 road games from San Francisco on TV. No other television, thus there was no need for a trio of announcers. Al Helfer wasn’t asked to go west. Vin would tell me that late in 1957 he had a pretty good idea that Helfer would be dropped.

Playing temporarily in a stadium configured for football and track, the LA Coliseum, Scully became the eyes of the fans. He’d do seven innings and Doggett two. Transistor radios became staples at the Coliseum. Vin painted picture and added color for fans in the park, on the freeways and at homes in the growing expanse of Southern California.

1959 – Scully did what I believe was his best piece of radio craftsmanship. The occasion was a brouhaha over a nutty play at the Old Coliseum involving Willie Mays, Don Drysdale and others. It’s a masterpiece that demonstrates Scully’s versatility. He could do sports of any speed, those moving quickly and slowly.

1963 – Vin works with Mel Allen for the fourth and final time, doing the Yankees-Dodgers World Series (1953, 1955, 1956 and 1963). The dominant Yankees were down 3-0 in the Series and were about to be eliminated. The beloved Allen, slowly losing his broadcast fastball, choked up late in game #4 and couldn’t continue to call his innings. Vin had to pick them up. Columnist Dick Young in the NY Daily News referred to Allen’s untimely hoarseness, “psychosomatic laryngitis.” His precious Yankees were being embarrassed.

1965 – Sandy Koufax pitches a perfect game at Dodger Stadium and Vin stamps it poetically. LA fans might know it by heart by now “Two and two to Harvey Kuenn…”

1966 – The two home team announcers weren’t automatically assigned to the the telecast on NBC . Curt Gowdy, NBC’s lead voice was put on the Series. Vin did only the home games with Curt and the road games on NBC Radio with Bob Prince. It would be the first of Vin’s many World Series broadcasts on radio.

1974 – By happenstance, the Dodgers were in Atlanta when Henry Aaron struck the Ruth record-breaker. It  occurred during Scully’s assigned innings. After allowing the crowd to emote and empty their lungs, Vin infused the political and racial impact of Hank’s accomplishment. “What a proud moment for our country and the world. A Black man is getting a standing ovation in the deep south!”

1975 – Scully did his first of seven seasons of NFL on CBS. His partners varied. One was John Madden.

1977 – Dodgers advance to the Series but ABC Television purchased the rights and Scully wasn’t engaged on either network TV or radio.  So he focused on CBS TV’s NFL.

1980 – Second on CBS’ depth chart of NFL announcers, he presided over the touchdown throw by Montana to Clark, simply know as “The Catch.” The Niners were headed to the Super Bowl.

1988 – The famous Kirk Gibson call. “In a year that has been so improbable… the impossible has happened!

1993 – Vin’s on the radio mic for the walk-off  home run by Joe Carter which gave Toronto its back-to-back Series championship.

1998 – He’s back with the Dodgers, essentially fulltime. Through the remaining years of his career, he would cut down on his Dodgers schedule.

2016 – Vin retires and is honored by President Barak Obama with the Presidential Medal of Freedom. Vin was with the Dodgers for 67 seasons. In 2021, it has the feel of an unbreakable record for a single team.

2021 – It’s the 50th anniversary of the hiring of the first-ever Black baseball announcer. Bill White was chosen by the Yankees. White credits Scully for his assistance and tutorial when he first started. Bill told us earlier this year: “I’d sent him audio and video tapes and he shared some important tips with me. Our connection was Peter O’Malley who hooked up the two of us. Pete and Vinny are close.”

Forever – Keep going, Vin. We will always need your inspiration!

A few years ago, a musicologist laid out how musical Vin’s perfect game call was. If you listen to it, it’s not only brilliant in its use of the language, but it’s melodic.