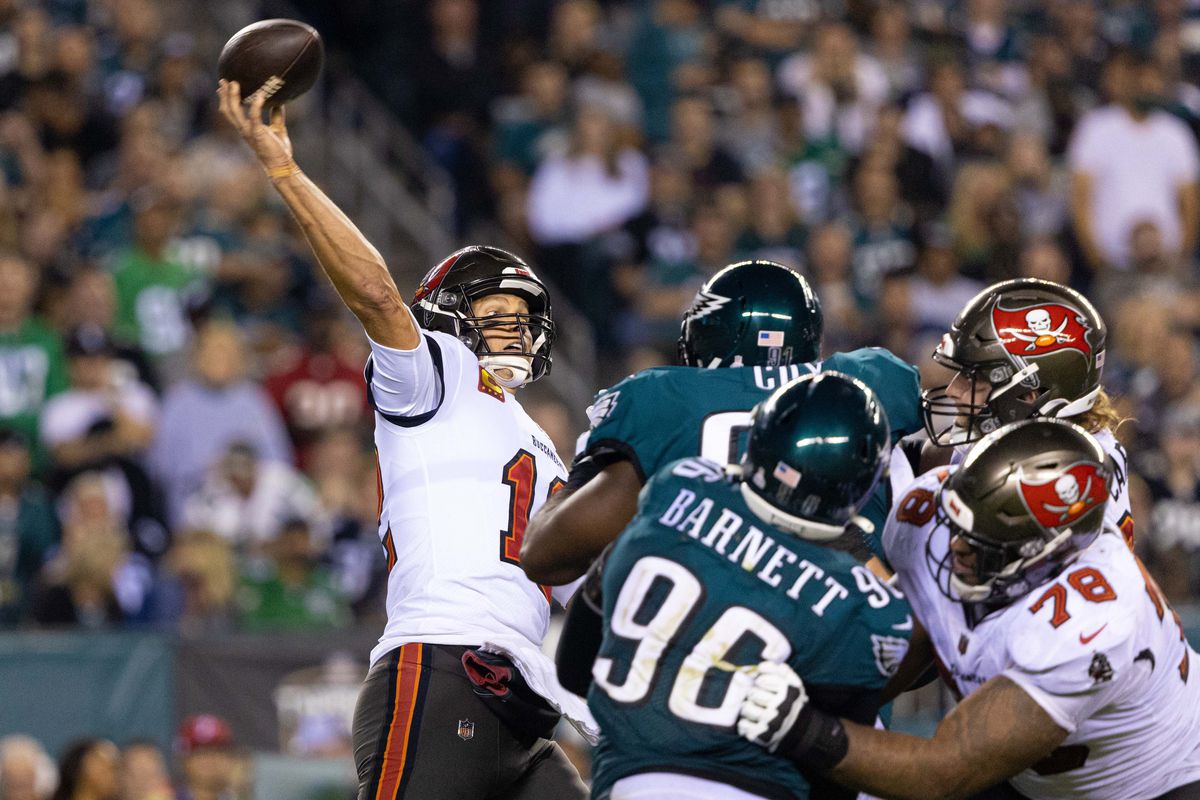 Brady Over the Years: To demonstrate the remarkable durability of Tom Brady’s career, Fox took viewers through a flashback of his 22 amazing years in the NFL. Coming out of a commercial break, Fox took fans back to his start in 2000, step-by-step through his dominant years in New England and now Tampa. Buck and Aikman captioned the progressive still-photos with remarkable awe. Brady, 44, has done so through more than two decades and at an astonishingly high-level.

Bucs Injury Bug: During a rushing touchdown by Buccaneers’ running back Ke’Shawn Vaughn, the Bucs suffered another injury to their offensive line when center Ryan Jensen was hurt on the play.  Aikman noted that despite injuries to their skill position players, they’ve been able to remain healthy on the offensive line.  Aikman also made a point that the Buccaneers had three Pro Bowlers and might have to play this game without two of them with another injury to tackle Tristan Wirfs. Jensen returned for the next series without missing a snap.

Movie Time in Philly: Early in the second quarter, Joe Buck discussed how Eagles’ head coach Nick Sirianni share clips to his club of the classic movie Rocky to motivate his players to prepare for this playoff game. After a drive where the Eagles’ defense was getting picked apart,  Buck joked that Sirianni might need to find another movie to show his team during halftime to motivate adjusting, which made Aikman laugh until the next play. Rocky was filmed in Philadelphia in 1976.

Reagor Mistake: After the Philadelphia Eagles’ defense was able to force the Buccaneers to punt on fourth down, Eagles’ punt-returner Jalen Reagor muffed the punt which was recovered by the Buccaneers.  Buck highlighted that Reagor was a former first round pick who was selected one pick before Pro Bowl receiver Justin Jefferson, implying that the front office made the wrong decision on draft day.

Dynamic Duo: On a third quarter touchdown for Buccaneers’ tight end Rob Gronkowski, the Fox broadcast showed a graphic highlighting the longevity of his relationship with quarterback Tom Brady.  Buck noted that this touchdown marks the 15th for this duo in the postseason, further adding to their lead of ‘mosts’ by any quarterback-receiver pair, which also features tandems such as Joe Montana and Jerry Rice.

Evans with some Flair: Capitalizing on an Eagles’ interception, the Tampa Bay Buccaneers scored a one play touchdown where wide receiver Mike Evans flipped into the end-zone.  Joe Buck upon seeing this chuckled and commented that he scored with “flair.”  Aikman interestingly contrasted this observation by discussing how he is a great leader with multiple Walter Payton Man of the Year nominations on the field. An interesting dive into a great player.

Aikman – Wishing He Was in Dallas: When previewing the Dallas Cowboys vs. the San Francisco 49ers, Troy Aikman said that it is a great matchup, and that a lot of people would want to be calling this game, implying that he wishes he was in Dallas. Joe Buck laughed in response to this as the onslaught of the Eagles continued. CBS’ Jim Nantz and Tony Romo had the later game that went down to the wire.

Anyone Seen Nick?: After the cannons fire in Tampa Bay, Buccaneers’ head coach Bruce Arians is followed by a Fox camera where he would shake Eagles’ head coach Nick Sirianni’s hand. Arians can be seen not being able to find Sirianni, to which Joe Buck asked, “Has anyone seen Nick?”.

Playoff Jitters: After two neutral zone infraction penalties on Cowboys’ defensive end Randy Gregory,  Romo breaks down how many of these penalties early in playoff games come from the nerves of the high-stakes nature the playoffs. Romo advises Gregory and the Cowboys to calm down and remember the fundamentals.

Playing Comfortably:  Early in the second quarter, Tony Romo analyzed how 49ers’ quarterback Jimmy Garoppolo has been playing very comfortably, even in uncomfortable situations. Romo marvels at how Garoppolo has been able to stay patient through intense pass rushes, completing 9 of 11 passes.  Nantz and Romo also demonstrated this through his relationship with head coach Kyle Shanahan. The two have found their groove at the perfect time.

Romo Vision: Following a receiving touchdown by Cowboys’ wide receiver Amari Cooper, Romo broke down the play side-by-side with an X’s and O’s moving diagram of the play, allowing viewers to learn the schematics of why that play was able to work.  Romo concluded that when Cooper was nearing the corner of the end-zone, he had a lot of separation from the defender, allowing him to score with little trouble.

SpongeBob Approved Kick: In a show of synergy between the CBS broadcast and their other broadcast geared toward a youthful audience on Nickelodeon, Nantz and  Romo went back to view a field goal where there was a graphic of SpongeBob between the uprights.  Romo then jokingly asked “Do you know how much time it took to get the slime here?” after CGI slime cannons went off on screen.

Video Board Takes a Hit: After a punt by the Dallas Cowboys hit the enormous video board that is 60 yards long, Jim Nantz and sideline reporter Jay Feely noted that several punts during pregame warm-ups also had this problem, with the in-game punt resulting in a re-do.  On the second attempt, the CBS camera crew followed the ball in the air, rather than the players running on the field to see if it would hit the board again.

Cowboy Confusion: Following a successful fake punt by the Cowboys that was correctly predicted by Tony Romo, the Dallas offense had a hard time getting onto the field in time to get a play off, resulting in a delay of game penalty.  Romo and Nantz analyzed how while the fake punt was effective in keeping the Cowboys’ hopes alive, the mistake of switching units halted their momentum, personifying their issues today.

Dak Attack: After a Cowboys’ interception, the Dallas offense can capitalize off key injuries to the 49ers’ defense with a rushing touchdown by their quarterback Dak Prescott.  Tony Romo analyzes that the 49ers need to be more vigilant on the defensive line to make up for these injuries, stopping the Cowboys from gaining any more momentum.

Fan Cam: On a second down late in the fourth quarter for the 49ers, the CBS broadcast cut to nervous (some even crying) Cowboy fans before the snap.  Tony Romo gives a message to these anxious fans telling them the game is not over just yet, to which Nantz agreed. (Ther

Rookie and the Vet: After a reception by Steelers’ tight end Pat Freiermuth, Al Michaels and Cris Collinsworth were impressed by the fact that he is one of Ben Roethlisberger’s most dependable targets.  Collinsworth found it especially impressive knowing that Freiermuth is a rookie and Roethlisberger is playing in his 18th season (likely his last), noting how it is rare for a duo like them to be so dangerous…and so quickly.

Fumbles on Fumbles: After a running play to Chiefs running back Darrel Williams, Al Michaels was amazed that he fumbled the ball twice, the first time being on the handoff, and the second after it was forced out by the Steelers’ defense. Cris Collinsworth noted that it has been especially amazing since the Steelers’ offense have not been able to produce any sort of momentum, making this defensive touchdown especially important.

Steel Curtain Not Open Yet: Entering halftime with only 45 yards from scrimmage under their belt, Al Michaels and Cris Collinsworth make note of how the Steelers’ offense has been sluggish and not gaining enough momentum, allowing for the Chiefs to make up for mistakes early in the game. Michaels absorbed the crowd noise as the Chiefs enter the locker room, happy with their home team’s performance.

Quarterback Kelce: On a trick play close to the end-zone, Chiefs tight end Travis Kelce received a direct snap and threw a touchdown pass to receiver Byron Pringle.  Al Michaels following the play joked to Collinsworth that this play was in the back of head coach Andy Reid’s playbook.

Chiefs Running Away With It: As the clock winds down in the fourth quarter, Al Michaels and Cris Collinsworth compare the Chiefs dominance of the Steelers to how the Bills defeated the Patriots on Saturday. Michaels added that while they did not score seven touchdowns on seven drives, the Chiefs more than handled their opponent, looking to next week’s game against those same Buffalo Bills.

Bye Bye Ben: With under a minute remaining, the NBC broadcast showed a montage of Ben Roethlisberger’s greatest career moments and talking about how he wants to be remembered.  As the game continues and reaches its conclusion.  Roethlisberger takes his final snap in what was an illustrious career, where his next stop will be Canton, Ohio.