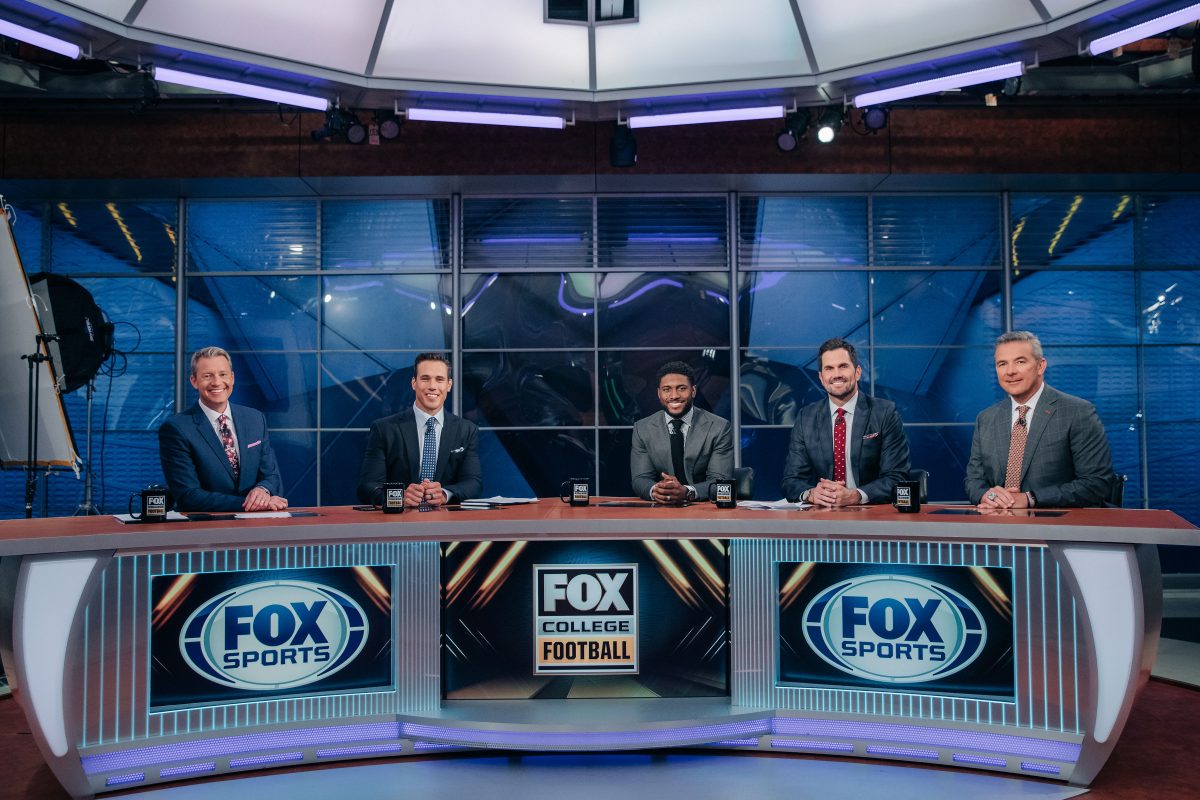 Has ESPN’s College GameDay gotten stale? The better question might be: Has Fox’ college football pregame show surpassed GameDay with the additions of Reggie Bush and Urban Meyer?  The answer is probably, depending on your taste.

GameDay has been around since 1987 when Tim Brando hosted, with sidekicks Beano Cooke and Lee Corso. Chris Fowler followed Brando and proved to be a better studio host than even Brent Musburger was on The NFL Today. But when Fowler left to do play-by-play, Rece Davis took his seat and there’s been a slight drop-off. To be fair, anybody would be a step slower than Fowler.

The real problem is the rest of the show. It still wins on atmosphere with its traveling circus to different campuses each week. There’s nothing like seeing the crazies out there at 9 a.m. with their colorful signs. But the contributions of sidekicks Desmond Howard and Corso are minimal. Hard to fault Corso, 84, who is still on-air after his stroke. But he contributes little other than his headgear pick at show’s end.

Kirk Herbstreit is still on the set contributing, even sometimes with something interesting to say. But Herbstreit is too close to the powers of the Big Five conferences to come down on anyone and he appears to be keeping his best stuff to himself for fear of slighting someone’s feelings.

Fox, on the other hand has come out of the box with a bang. Bush and Meyer have been a solid addition to host Rob Stone along with Matt Leinart and Brady Quinn. Bush isn’t afraid to take a shot at anyone and Meyer still has an obvious strength in analyzing teams.

Pete Fiutak, who has run collegefootballnews.com for years, is one of the foremost experts on the game. Here’s what he had to say this week about Fox’ pregame coverage: “I never thought this would happen,” he began, “but you win, FOX. I’ve been watching your show more than GameDay. (Fox’) panel of talent–straight out of the Handsome Boy Modeling School– is fantastic!”

Regarding Meyer, Fiutak wrote: “This was the case after his first sabbatical and foray into the media world – there’s absolutely no one better at breaking down plays and explaining college football better than Urban Meyer.”

Last week Fox was on the campus of USC before its game, when Reggie Bush spotted a dozen or so USC players warming up with their shirts off, showing off their physiques. Bush exploded in anger. “Put your shirts back on,” he yelled. “If you’re not winning national championships, if you’re not undefeated, if you’re not blowing people away,” he said, “you’re not intimidating anybody. Put some clothes on and look like a football team.”

So, for now, Fox’ pregame is the flavor of the month and it’s holding up nicely. Both shows need better coverage of the gambling aspect, with perhaps a Vegas bookmaker discussing a few big games instead of the tired picks at the end of each show. Half of the audience, at least, wager on these games so give them something to chew on. ESPN’s guest selector segment is pure fluff and its guy, “The Bear,” seems to pick weird games without a lot of explanation.

Ratings-wise ESPN is still the leader in the clubhouse. But it might not be long before college football fans learn that Fox has something good to offer.

As the incomparable Vin Scully would say, numbers can be used the way a drunk uses a lamppost, for support not for illumination. But…

According to Sports Media Watch the ratings for last Saturday’s high noon game (9.21) were:

For what it’s worth, Fox also maintains that its ratings are up significantly through the first four weeks of the season.

The network released numbers earlier this week, reflecting a 71% ratings increase for 12 noon games, year over year, and a 44% improvement overall for its college games.

This week’s (9-26-28.19) college schedule with full list of announcers and networks:

Put simply- Will never watch a pre game show that has Urban Meyer on it. Lost me right out of the gate.

Jim Harbaugh, is that you?

You don’t have to be from Michigan to have an extreme distaste for the sketchy Urban Meyer. Ohio State-centric much?

FOX/FS1 pre-game show is solid. Rob Stone has been excellent on FS1 for soccer and college basketball coverage.

The only thing ESPN has going is going live to these sites. The show is super stale. No insight. Picks stinks. They give me nothing in terms of betting. The thing not in the story is must we always talk about the 4 team playoff.

Frankly, I like Rece better than either Brando or Fowler. Frankly, he is probably the closest to the current voice of college football as anybody. While the rest of the group is a bit stale, I am not watching Meyer, too much sleaze factor there.