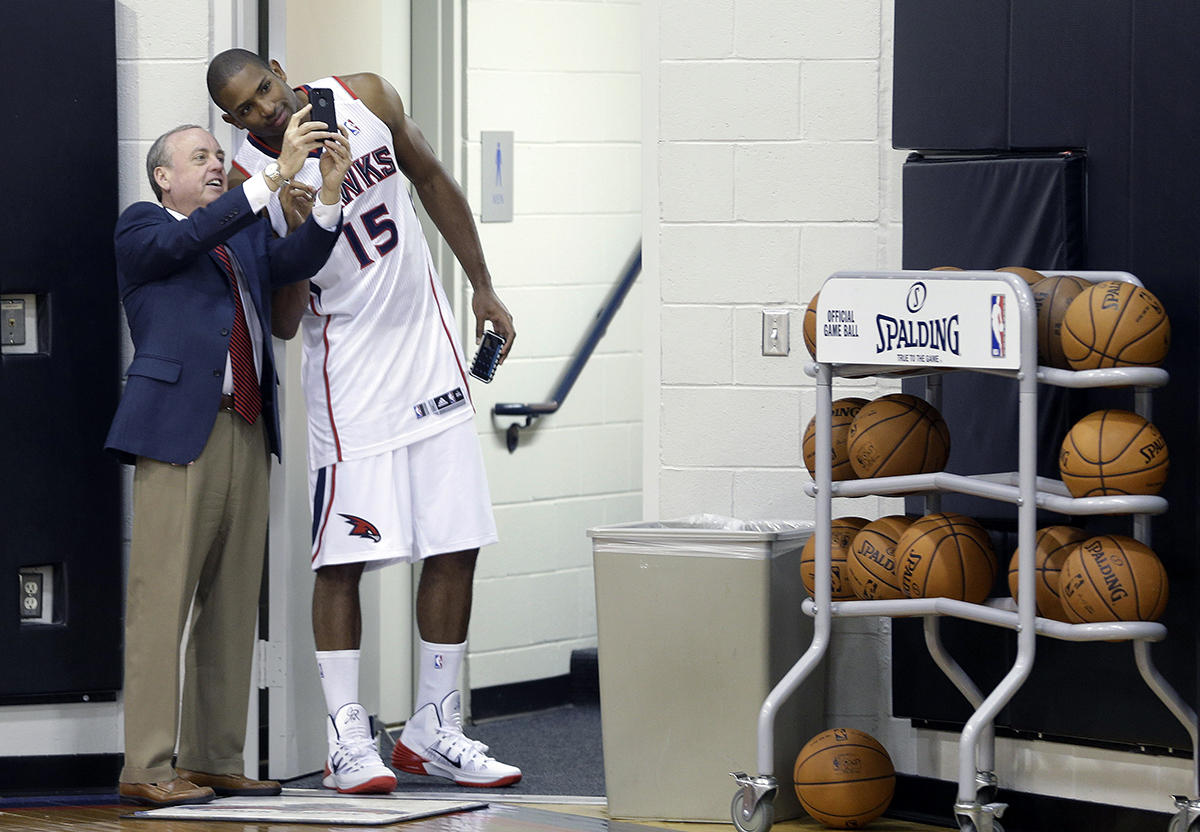 Steve Holman has been at it for some 37 seasons. He hasn’t missed a broadcast since March, 1989. Tonight, he’ll do his first ever Hawks game in the month of July, game six of the Eastern Conference Finals against the Milwaukee Bucs.

For now, he’s living a dream. A New Englander, Holman started when he was a teen in Lawrence, Massachusetts, where he was hired by iconic broadcaster Curt Gowdy who owned a string of radio stations. Holman told me a couple years ago that Curt told him,  “Stevie, we’re going to make you full time. It’s $110 a week and all the records you can steal.”  He added, “Gowdy helped me a lot. As a tribute to him my dog is named Gowdy!”

Holman would later assist legendary Celtics’ broadcaster, Johnny Most. He would do Johnny’s busy work, like getting him cups of coffee and keeping his stats. One day, in the mid 1970s, Most lost his raspy voice, so Holman subbed for him then and a few other times later. Holman relishes his experiences with both Gowdy and Most.

In 1980, an old boss of Steve’s, Mike Wheeler was running programming at WGST Radio in Atlanta when it turned all-news. Wheeler brought Holman down to anchor sports. He had never been to Atlanta but hasn’t left since. In time, he got his shot doing Hawks games when the team was hardly a big draw. Yet interest grew when basketball fans moved south and adopted the Hawks. What didn’t hurt was the arrival of Dominique Wilkins.

Atlanta has been a city of newcomers, of many transplanted northerners who sought more spacious living quarters and moderate winters. The numbers tell a story of explosive growth. Atlanta’s metro population was some 600,000 in 1950. Seventy-one years later, it’s almost ten times bigger, 6 million. The metro is now the ninth biggest in America.

It took a while for professional sports to even set up shop in Atlanta. Georgia football and to a lesser extent Georgia Tech were the centers of attention. The city and certainly Georgia as a whole still love their college football.

The Braves moved to Atlanta from Milwaukee in the spring of 1966. That fall, the Atlanta Falcons were born and a couple years later the peripatetic Hawks settled in the southern city after stops in Buffalo, Moline, Illinois, Milwaukee and St. Louis. Hockey? It hasn’t worked yet. The NHL has come and gone twice.

When you identify some of Atlanta’s early broadcasters, two popular and stylized voices were beloved, the throaty homer, Larry Munson of Georgia and Tech’s Al Ciraldo. When baseball arrived, Ted Turner aired Braves games nationally on TBS. Skip Caray, Pete Van Wieren and Ernie Johnson, Sr. became household names in the 80s, perhaps more so nationally than in Atlanta proper where the constituency hardly crashed the gates. In time, the team won, the city grew and the Braves developed loyal fans.

Holman now is right there as one of Atlanta’s all-time play-by-play announcers that also include Wes Durham.

It’s interesting to note that Skip Caray, Harry’s son, arrived in Atlanta to call Hawks games. He had been with the team in St. Louis. By 1976, Skip joined the Braves. John Sterling had a stint calling Hawks games but he didn’t get along with his analyst Walt Frazier.

Enter Holman who’s been at it as long as any play-by-player in Atlanta. Steve has served the club with unwavering dedication. He hasn’t missed a game since 1989. How does that old saying go about the delivery of mail? “Neither snow, nor rain, nor heat, nor gloom of night stays these couriers from the swift completion of their appointed rounds.” When there’s a Hawks game, you can bet that Steve will be at his broadcast position.

Holman presides with a breezy style. He has no patented lines. He lets the game come to him. Like his mentor Most, he’s an unabashed rooter and makes no bones about it. At 67, Steve has no plans to retire.

Seeing folks come and go? The Hawks are on their tenth coach and the U.S. is on its seventh president since Holman became their broadcaster.

Since the NBA’s decree after play resumed during Covid last summer, broadcasters for the most part haven’t traveled, particularly on team charters. Holman, a team employee, did go to Milwaukee this week to cover the Conference Finals. It was his first trip since the pandemic hit. The Hawks put him on a commercial flight where he voiced the last two matchups. Steve told me this week, “It’s great. We can talk with the players at the team hotel and pick up some anecdotes.”

One thing you can count on when you bump into Steve is that he’ll be wearing a genuine smile. His personality is upbeat and contagious.

The St. Louis Hawks won a title in 1958 disrupting the streak of Celtics’ championships. The team was led by the great Bob Pettit. Since coming to Atlanta, this is only the second Conference Finals in which they’ve competed. In 2015, they were outplayed by LeBron James and the Cavs. Tonight they’ll have an opportunity to even the series at three wins apiece.

Steve and I had a chance to catch up:

Has Atlanta gotten behind the Hawks this season?

Yes, the city is electric right now. Every playoff game is totally sold out with standing room only. People all over town wearing Hawks gear.

You’ve been behind the Hawks radio mic since the mid 1980s and haven’t missed a game since 1989. That’s a ton of basketball. You’re now following a budding superstar in Tre Young. You’ve also covered some other greats. Please give me the all-Holman team since you’ve covered the Hawks.

Your roots are New England where you got to know Johnny Most. Would you consider him your mentor and what did you learn from him?

Johnny is definitely my mentor. I started keeping score for him when I was 17 years old working at Curt Gowdy’s radio station in my hometown, Lawrence, Mass. John taught me that it’s the good guys against the bad guys. I open every broadcast with “high above courtside” which was what he did. I asked him for permission to do it shortly before he passed.

Is the current team, your all-time favorite? Are you have fun?

This team is so much fun to cover. They’re so young. (Trae Young, John Collins, Cam Reddish, Kevin Huerter and De’Andre Hunter are all under 22). It is becoming my all time favorite for sure.

How have you gotten to know the players of this team, given the ongoing Covid restrictions?

It’s been tough but zoom has helped, and traveling now for the first time since the pandemic, coming to Milwaukee, has allowed me to hang with them a bit.

Radio has changed since you took the job. How do you see basketball’s future on radio?

I think the future of basketball on radio/audio is brighter than ever. Between SiriusXM, Smartphones and the internet more people than ever can listen. To me radio calls are much better than TV calls.

Do you prefer working alone which you’ve done for most of your career with the Hawks?

I’ve never been opposed to having someone with me. Currently my partner Mike Conti does a terrific job. He lets me concentrate on the game. He handles everything else.

Anything funny or crazy happen to you covering the NBA?

I suppose the funniest thing I can recall was one night in New York. I was assisting Johnny (Most) when the Celtics were playing the first game of a Madison Square Garden doubleheader. Tommy Heinsohn was the Boston coach and I was holding the tape-recorder while John started asking him questions about the Knicks. Tommy stopped him and said we’re not playing the Knicks, and Johnny said, “Then what the F are we doing in New York?”