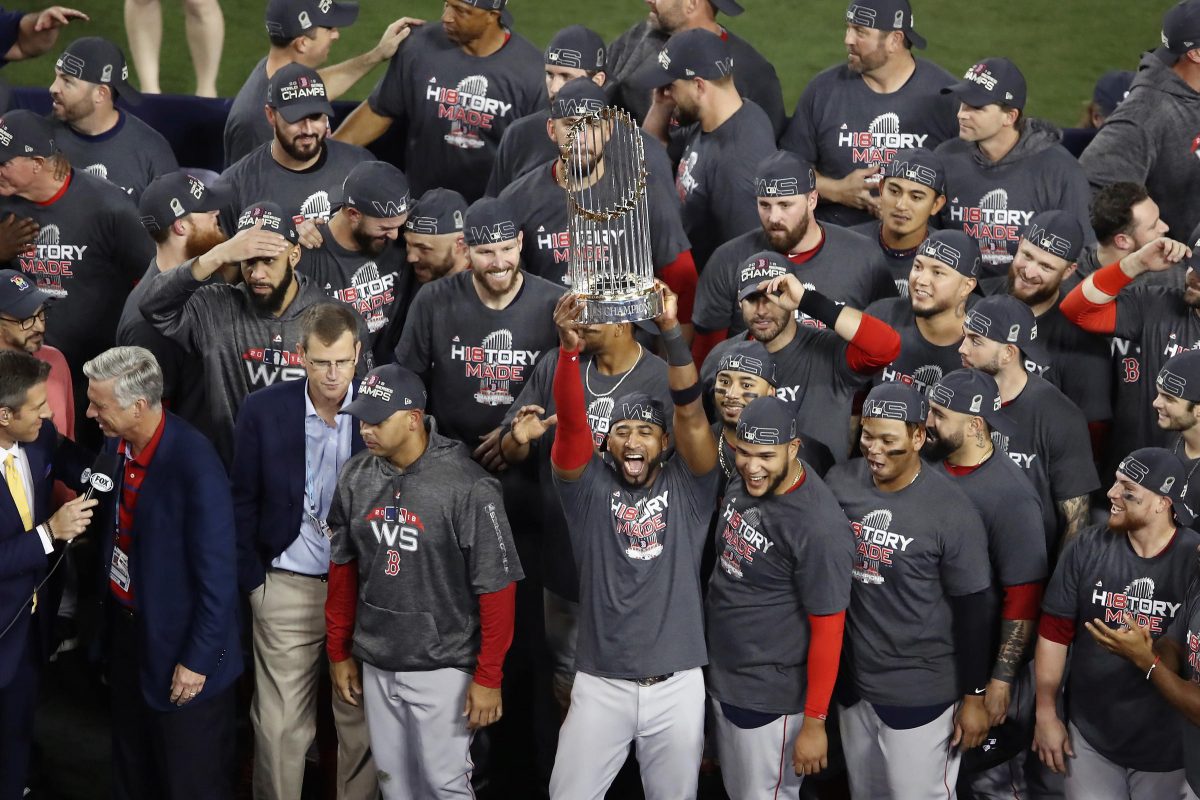 The Boston Red Sox celebrate their 5-1 victory over the Los Angeles Dodgers in Game 5 to win the 2018 World Series at Dodger Stadium on Sunday night.

True story. Circa 1970. As a teen, I played hoops in our family back yard. Small-market, dim-marque teams domineered the baseball age: Baltimore, Pittsburgh, Oakland, Minnesota. Between shots, I dreamt of the perfect October—Red Sox-Dodgers. Now that would be a World Series! What paradise: Fenway Park and Chavez Ravine. What history: Campy and Sandy and Yaz and The Kid. What TV Voices, at that time local-teamers splitting Series play-by-play: L.A.’s nonpareil Vin Scully and Boston’s lyric Ned Martin. How good could the game get? Surely America would pivot around a Fall Classic between two such tiaras. It would have in 1970. It did not in 2018.

Offense awoke in the last innings of 2018’s Game Four, a 9-6 Boston revival, showing why Franklin Roosevelt once called himself a “fan who wants to get plenty of action for my money. I get the biggest kick out of the biggest score—a game in which the hitters poke the ball into the far corners of the field.” Most agree—especially youth, few of whom, as the game neared four hours, were among 13.6 million TV Foxes. In one sense, Game Five returned to form—all (four home runs) or nothing (17 strikeouts and 11 hits). Yet the Red Sox’ 5-1 title-decider took only a rare-for-2018 three hours, actually adjourned before midnight, and not coincidentally got a Series-best 17.64 million viewers. These days baseball likes any TV rainbow. For one night it led ages 18-49. Its 12.3 rating beat NBC’s Monday Night Football’s 9.5. Video streaming and Spanish-language Fox Deportes helped, too.

Series ratings show baseball continuing its retreat into what Bob Costas once called “a place in society not nearly what it should be.” As noted, the game’s plunge has been steepest on TV. In 1952, each Fall Classic telecast averaged one in two Americans, viewing; 1980, one in five; 2010, one in 16; 2018, one in an abysmal 22. By contrast, this year’s Super Bowl snagged nearly one in three, or 103.4 million, among the 10 all-time most watched programs. In 2017, football forged TV’s 20 top-rated sports events, the NFL Pro Bowl out-rating baseball’s All-Star Game. The day when baseball’s 1969-84 commissioner called the post-season and All-Star Game “baseball’s jewels” seems an eternity ago—as does that commissioner, Bowie Kuhn, who in his term swelled baseball attendance, revenue, and network TV rights by 193, 382, and 1,140 percent, respectively. He also swelled its appeal, acting for the public, not owners alone.

Fact: Football routs baseball in video game sales, license garb, unique Internet users, and “marketable athletes.”  Fact: Hollywood once meant baseball’s The Natural, Bull Durham, and Field of Dreams. In 2009, football’s The Blind Side became sport’s all-time highest-grossing film. Fact: In ESPN’s summer 2013 Kids in Sports focus, only 25 percent of U.S. adolescents age six to 17 played baseball against basketball’s and football’s 40 percent each. Unattended, for baseball, the getting that is bad seems almost sure to get worse, most notably on network television and most markedly in autumn.

In a 2017 survey conducted by Q Scores Company measuring the appeal and recognition of celebrities among sports fans ages 30 to 64, baseball’s highest-ranked active player was the Cubs’ Kris Bryant, in 33rd place. The Dodgers’ Clayton Kershaw placed 167th and the Nationals’ Bryce Harper 253rd. Pro basketball and pro football trounced the pastime. “Facts,” John Adams said, “are stubborn things.” It is unclear if Rob Manfred, Selig’s 2015- successor as commissioner, Rob Manfred, is aware of baseball’s crisis—and if so, has the will to confront it. The immediate past teaches lessons the game must not ignore. Below, a six-point program for renewal:

First, hire broadcasters who enliven. Baby Boomers were weaned on Vin Scully, Mel Allen, Ernie Harwell, Dizzy Dean, and Harry Caray, among other artists, who employed language to entertain. Today, robotic and alike, many forget that, as, Caray once told me, “For God’s sake, don’t guys now know what it’s all about? ‘Let me entertain you’!” He didn’t mean statistics—to Dean, pricelessly, “statics”—rather language’s nub, storytelling. Anecdote studded Lincoln’s narrative. Roosevelt invented a piano teacher to use an illustration. Scully said too many Voices use “numbers the way a drunk uses a lamp post—for support, not illumination.”  Query: By the way, why isn’t the great Jon Miller doing network baseball?

Second, as previously noted, baseball needs network TV. Since 2009, it has focused on cable’s MLB Network, a fetching display luring those already interested. Meantime, the sport has virtually deserted national as opposed to cable or local TV, airing nothing near a Game of the Week to grow interest. Its sole network, Fox, got baseball largely to fill Saturday air-time on remote low-rated outlets—material for its garbage dump. Such cynicism fills owners’ pockets while removing baseball’s oar in the public’s river. Baseball should retrieve a Saturday afternoon TV weekly Game on NBC or CBS to complement what Fox covers, begin a pre-game show redolent of the 1980s The Baseball Bunch—and start a CBS Radio Saturday (also Sunday) afternoon Game of the Week, with huge affiliate clearance, to replace ESPN. Historically, a tiny regular-season network niche sires a pee-wee October audience. F. Scott Fitzgerald coined “The Lost Generation.” How many generations of children does baseball intend to lose?

Third, baseball should restore TV camera intimacy. Famed NBC director Harry Coyle hailed Fenway Park’s “great” coverage; its major camera shot from behind the plate yet above a wire backstop. Contrast its up-close coverage to San Francisco’s, Detroit’s, and Atlanta’s, their home plate camera so high the field seems to need a passport. Many new parks put the TV booth above swanky suites, players aping a rumor. As bad, screens obstruct the camera. What a baseball recipe: a picture tube upon which little happens—and we can’t see what does. Incredibly, today’s “new old” parks provide more TV-unfriendly coverage than 1970s and ’80s cookie-cutter stadia. Fenway’s “great” coverage” rose from a decision to build a TV catwalk above an angled backstop to please the viewer. Each team should move the home plate camera—a fan’s picture window—closer to the field.

Fourth, baseball should solve issues (suggested here) that trouble Joe Fan, not those that don’t (umpire fallibility). Selig said that replay (hardly instant) would shorten games. Naturally, it lengthened them. It also bleached color, axing it for execs’ “imperfect way of getting umpires close to perfect,” said the Wall Street Journal. Today baseball brooks calls to be reviewed as ear-phoned umpires, linked to New York, wait on the field, two, three—often more—minutes while the game stops—a slow game made unwatchable. Skipping the obvious—if umpiring stinks, hire better umps—replay has turned men in blue from co-stars once jaw-to-jawing with Billy Martin to props for a wire between The Apple and a park. Meanwhile, the skipper busies himself consulting with replay aides. What a loss—at what a cost.

Sixth, baseball must change the start time of postseason coverage. In 1985, it began an all-prime-time World Series, hoping to swell viewership, which shrank. Almost all network post- and regular-season TV is now nighttime, for cash. As children sleep, even adults nod off. At a 1969 All-Star Gala in the White House, Richard Nixon, addressing Hall of Famers and active players, recalled the 1929 A’s scoring 10 runs in the seventh inning to overcome an 8-0 Cubs lead. “I stay all the way every game after that experience!” he said, a vow most recently relevant to Game Five of the 2017 Fall Classic—a jai alai of seven homers and four half-innings of three or more runs. Covering the Series since 1975, the Washington Post’s Thomas Doswell pronounced the Astros’ 13-12 victory over the Dodgers in Houston the “most insanely entertaining game” he had seen. America might have liked it even more had the game ended before 1:37 a.m. Eastern Time.

Almost midway through the score was tied at four, millions already in bed, not aware what lay ahead. Ultimately, Alex Bregman singled in the 10th inning, ending a five hour and 17-minute madhouse that mesmerized 23 million viewers. How many more would have marveled had the first pitch arced at 4:20 instead of 8:20 Eastern Time on Sunday night? In 2018, who would have espied all of Game Three’s 18 innings in Los Angeles? A night later, how many more would have seen Boston revoke a 4-0 late-inning Dodgers lead? On October 28, how many kids five, eight, 10 fell asleep before Chris Sale fanned Manny Machado for the Red Sox’—go ahead, pinch yourself—fourth world title since 2004?

For decades, children have deposited baseball in their memory bank—as example, each Baby Boom male I know recalling where he was when Bill Mazeroski homered at 3:36 p.m., October 13, 1960. By contrast, in a public speaking course I teach at the University of Rochester in Upstate New York—baseball and Leatherstocking country, three hours from the Hall of Fame—a student recently began a speech by asking who Mike Trout is. It was like asking who Mickey Mantle was, in 1956. The class holds 25 students. Four raised their hand. Outside of Southern California and New Jersey, Trout’s home, results might be similar. The reason is America yearly getting farther away from the “habit of watching baseball,” Ernie Harwell once said.

Baseball should envision interest forged tomorrow from youth today, inhaling film mogul Adolf Zukor’s truism that “The public is never wrong.” It should solve a horse-and-buggy rhythm, an October of drowsy adults and slumbering kids, and network invisibility from April through September. It should build on the 2016 Cubs, 2017 Astros, and 2018 Red Sox—storybook tales panting to be marketed. It should utilize the magic of network radio. Beyond cable—“MLB: All Baseball, all the Time,” reaching the already devout”—it needs another over-the-air free TV network like NBC or CBS to complement Fox and use the sole vehicle to reach each living home. The public deserves better. Reaching every generation, baseball does too after the wonder it has supplied. Perhaps the next time the Red Sox and Dodgers meet in October, the pastime will electrify the land.

How did MLB, then dominant on TV, respond to the eruption of the NFL in the 1960s?

Amen to all of the above! Vin has said that he doesn’t mind a long game because when he was a kid, a quick game left him feeling cheated. I get that. The LA Times has a column today arguing that the games aren’t too long, that if the game starts at 8 p.m. eastern, yes, kids may take their phones to bed whereas they used to take their transistor radios. But what this misses is getting them addicted in the first place, and that’s what the Game of the Week and kid-oriented shows do. I don’t think people decide… Read more »

During the Workd Series Baseball should also go back to day games on the weekend. This would give the kids and many adults a chance to watch the whole game. All teams should involve kids during the game. I went to a game in the Metrodome many years ago and The had a child announce each player coming to bat in the home team’s half of the 6th inning. A few teams do it but, they all should. A great program when I was growing up was “Happy Felton’s Knothole Gang”. It was a show that featured Little Leaguers who… Read more »