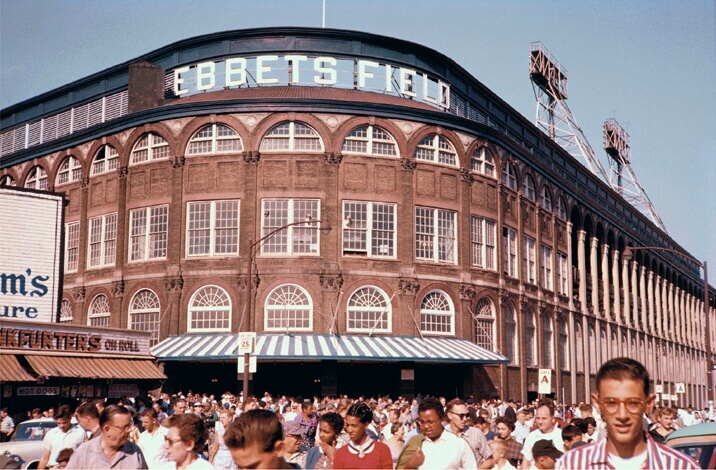 This Saturday, Bob Costas will be honored with the 42nd Ford Frick Award, emblematic of baseball broadcast excellence. He’ll give his acceptance speech in Cooperstown, on grounds near the National Baseball Hall of Fame, stepping up  to the podium at approximately 5 o’clock. It will stream live on the HOF’s Facebook page.

In celebration of the Frick induction weekend, we’re taking a brief look at the first two award winners, Mel Allen and Red Barber, groundbreaking broadcasters who helped develop the rhythm and nomenclature still used today by many behind the baseball mic.

In Wednesday’s edition, Smith shed light on the reasons why Mel Allen was shockingly fired from his Yankee job in 1964. Today, Smith talks Barber. We’ll conclude this piece, paying tribute to Bob Costas, the brilliant broadcaster whose passion for baseball is contagious.

Curt, Red Barber said that he was fired by the Yankees after the 1966 season simply because he requested a television shot of an almost empty Yankee Stadium (413 fans for a meaningless makeup game that September against the White Sox.) From what you’ve learned, is there more to it?

Red Barber’s firing by the Yankees in September 1966 was a many non-splendored thing. After 15 years as head man in Brooklyn, he had left in 1953 after a falling out with Dodgers owner Walter O’Malley to join Mel Allen at the Big Ballpark in the Bronx—sport’s two klieg-light announcers in the same booth: a recipe for trouble. Mel invariably treated Barber with the respect due a colleague. As junior partner, the Ol’ Redhead perhaps simply missed being boss. In September 1964, Mel was shockingly fired after a quarter-century as Voice of the Yankees.

Barber later conceded to feeling less empathy than anticipation at his again becoming a club’s lead Voice. That was not what team brass in mind. Ex-skipper Ralph Houk, named General Manager in 1963, obsessed at remaking the Yankees’ image in that of the more loveable and losing Mets. In November 1964, The New York Times bannered “Allen replaced by Joe Garagiola,” the comic former catcher whom Red would come to loathe. Lindsey Nelson called Joe “the single most ambitious man I ever met,” not meaning a compliment. Inevitably, Joe and Barber—Red also disliked ex-Yank Phil Rizzuto—clashed. In 1966, Houk replaced Johnny Keane as manager, the team placing last. That September 22, the day Michael Burke became president, 413 specked 65,010-seat Yankee Stadium. On WPIX television, Barber thought it “the perfect place for Burke to start, nowhere to go but up.” Red asked director Don Carney to pan the stands. No shot. He asked again. Zip. Later he said, “I found out [Yanks radio/TV head] Perry Smith was in the control room. He told them not to show the seats.”

Report, Barber recalled from using 1930s radio teletype, leaning into his mic: “I don’t know what the paid attendance is, but whatever it is, it is the smallest crowd in the history of Yankee Stadium, and this crowd is the story, not the game.” Red’s act defied. Next week, like Mel Allen in fall 1964, he misjudged. Asked to breakfast by Burke, Barber, like Allen then, anticipated a new pact—indeed, thought Burke was going to ask about player personnel! Instead, the new Yanks head said. “We have decided not to renew your contract.” Barber convened the press, said that “I have a record of thirty-seven years of fine work. I am not going to allow Mr. Burke, or anybody, to trifle with it,” and let him blame his fate on telling truth to power—Red’s TV audience about a Stadium crowd of 413. The retelling was true, but incomplete, letting Barber minimize what had become a pain in the patootie to the Yankees—the on- and off-air friction between career Voice Red and ex-jocks Joe and Phil. Sadly, the club felt the older grand stylist more expendable to its future. No one could remotely envision him remaking the team’s image in that of the new-age Mets’. To me, the squabble over the camera shot was more a symptom of trouble than a cause. None of this dishonors Barber, who on a given day mixed “walkin’ in tall cotton” and “FOB—Full of Brooklyns” with Carlyle and Thoreau. Brooklyn cabbies were known to say, “That Barber, he’s too fair.” What a grand bequest.

Barber’s formative years in New York in the early 1940s were trying times for our great country. Young men were on the battlefields of war and their wives were at home uneasily; some alone and others as single parents.

On New York radio, Barber and the Dodgers were an escape. Red kept his audience warm company, teaching many women listeners the basics of the game and how to keep score.

As Curt illustrates, Red introduced words and phrases on-air, redolent of his Southern roots; jargon that at first was foreign to New Yorkers. He interwove this newfound lingo in his game broadcasts, doing so softly and unhurriedly . His play-by-play was calming; hardly a soporific, but still a needed sedative for the inescapable news of a world at war. Brooklyn and New York at large developed a love affair with Red and his twang. Remember, during the first seven seasons that baseball was on New York radio (1939-45), Red covered every Brooklyn game. Mel Allen in those years was on only two full seasons. Barber was five years older than Mel and had a professional jump on him.

Concomitantly, you might say, Barber’s baseball broadcasts enriched listeners’ use of the English language. If he used the word swarthy, for instance, listeners looked up the meaning. Or as Curt reminded me, yes, Barber might say, “He made a concomitant error.”

Like Red, Bob Costas loves language. His acceptance speech tomorrow will undoubtedly be eloquent, given his love affair with baseball and his passion for rich expressions. Anyone with a sense of appreciation marvels over Bob’s ability to never ever be at a loss for the right word.

Costas has presided over broadcasts of virtually every sport and on the biggest of network stages. Whether it’s the Olympics that are biennially sprinkled with unexplored countries; horse races with unfamiliar colts; the NFL with battles of unshackled muscle or the NBA with its sometimes unimaginable grace, Costas has done it.

Still, it’s his baseball play-by-play that swells with the curiosity of an innocent child and the trained eye of a seasoned journalist. Bob has championed the game since he was a toddler.

He often talks about his experience as an eight or nine year-old, driving cross-country with his family as it moved out west for a couple of years. He reminisces about the fun he had; squeezing the radio dial in his dad’s car, picking up games from all over America. Young Bob didn’t need a map. He knew that Western Pennsylvania couldn’t be far off when Bob Prince’s Pirates’ broadcast started coming in clear as a bell. He continued marking his geographic progress while appreciating the likes of Waite Hoyt, Harry Caray and Jack Buck. He talks about the excitement of crossing into Nevada and beginning to pick up Vin Scully whose stature at the time was growing the length of America.

At this point of his star-studded career when he’s beginning to cut back a bit, Bob still calls baseball for MLB Network and does so melodically. He still studies baseball broadcasters too, breaking down their styles and strengths. For all his awards and innumerable Emmys, Bob says the Frick recognition means more.

There is something that viewers might not know about Bob. It’s how helpful he is to current and budding broadcasters. In my view, it’s an attribute that sets him apart from many others in the so called best in class space. Whether it’s a young aspiring student announcer in the Dakotas or a well known talkie in New York, Bob makes himself available for counseling or interviews. He does not discriminate. Like Marty Glickman, one of his mentors, Bob Costas nurtures others. It makes him feel good, as it should. It also inspires those he guides. Helping, assisting and giving will forever be integral parts of anyone’s legacy.

As they said about Ruth, DiMaggio or Williams, “Bob Costas makes it look easy.”

One more thing about Costas. He lets his partners shine, from Kubek to Kaat….and knows when to shut up,letting the picture tell the story.